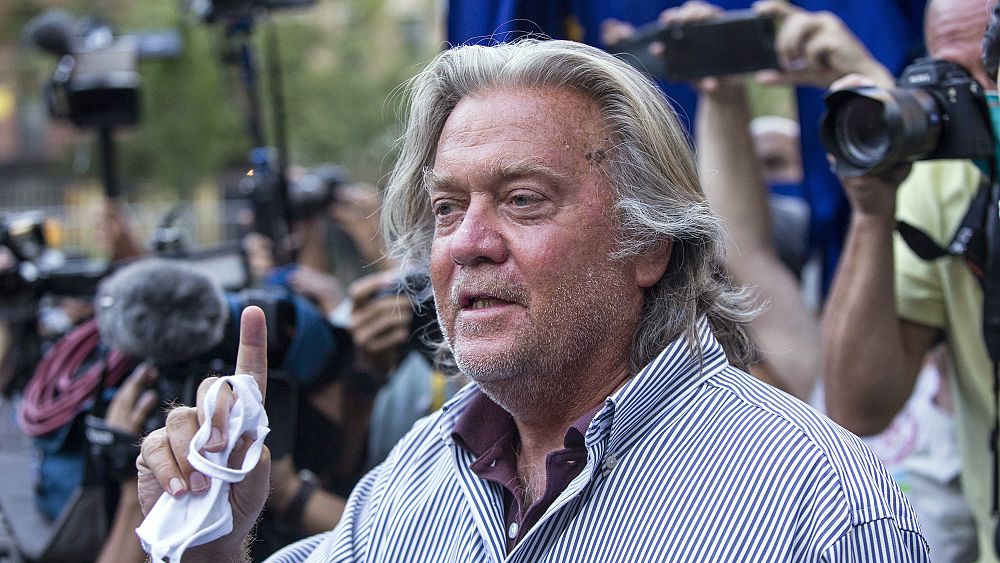 President Donald Trump has pardoned former chief strategist Steve Bannon as part of a late flurry of clemency action benefiting more than 140 people, including rap artists, ex-members of Congress and other allies of him and his family.

The pardons and commutations were announced after midnight Wednesday in the final hours of Trump”s White House term. It follows separate waves of pardons over the last month for Trump associates convicted in the FBI’s Russia investigation as well as for the father of his son-in-law.

Steve Bannon pleaded not guilty to charges that he duped thousands of investors who believed their money would be used to fulfill Trump’s chief campaign promise to build a wall along the southern border. Instead, he allegedly diverted over a million dollars, paying a salary to one campaign official and personal expenses for himself.

The pardon for Trump’s former adviser nullifies a prosecution that was still in its early stages and likely months away from trial in Manhattan, effectively eliminating any prospect for punishment.

“Steve Bannon is getting a pardon from Trump after defrauding Trump’s own supporters into paying for a wall that Trump promised Mexico would pay for,” Democratic Rep. Adam Schiff said on Twitter. “And if that all sounds crazy, that’s because it is. Thank God we have only 12 more hours of this den of thieves.”

A voice of nationalist, outsider conservatism, Bannon led the conservative Breitbart News before being tapped to serve as chief executive officer of Trump’s 2016 campaign in its critical final months.

He later served as chief strategist to the president during the turbulent early days of Trump’s administration and was at the forefront of many of its most contentious policies, including its travel ban on several majority-Muslim countries.

But Bannon, who clashed with other top advisers, was pushed out after less than a year. He did not respond to questions on Tuesday.

Trump has already pardoned a slew of longtime associates and supporters, including his former campaign chairman Paul Manafort; Charles Kushner, the father of his son-in-law; his longtime friend and adviser Roger Stone; and his former national security adviser Michael Flynn.

The actions underscore the president’s willingness, all the way through his four years in the White House, to flex his constitutional powers in ways that defy convention and explicitly aid his friends and supporters.

Other reprieves on Wednesday went to rap performers Lil Wayne and Kodak Black.

Wayne, real name Dwayne Michael Carter Jr., who had been facing a sentence for possession of a firearm and ammunition, was granted a full pardon.

Black, whose real name is Bill Kapri, had his sentence commuted. He had been jailed for 46 months for making a false statement on a federal document, and has served nearly half of his sentence.

Trump departs the presidency twice impeached, with millions more out of work and 400,000 dead from the coronavirus.

He will be forever remembered for the final major act of his presidency: inciting an insurrection at the Capitol that left five dead, including a Capitol Police officer, and horrified the nation.

The remarks were his most severe and public rebuke of the outgoing president, and set a tone as Republicans weigh whether to convict Trump on the impeachment charge that will soon be sent over from the House: “incitement of insurrection.”

“The mob was fed lies,” McConnell said. “They were provoked by the president and other powerful people, and they tried to use fear and violence to stop a specific proceeding of the first branch of the federal government which they did not like.”

Trump has denied any role in fomenting last week’s insurrection despite encouraging supporters to march on the Capitol — he called on them to “fight like hell” — and praising them while they were still carrying out the assault.

McConnell vowed a “safe and successful” inauguration of Biden on Wednesday at the Capitol, where final preparations were underway amid heavy security.

By the time Biden is sworn in, Trump will already have landed at his private Mar-a-Lago club in West Palm Beach, Florida, to face an uncertain future — but not before giving himself a grand military sendoff, complete with a red carpet, military band and 21-gun salute.

Trump ‘will pray for new administration’

In the taped remarks, Trump says he will pray for the success of the next administration “in keeping America safe and prosperous.”

“We extend our best wishes and we also want them to have luck, a very important word,” Trump said.

Trump did not mention President-elect Joe Biden by name, nor did he recognize his victory.

The president also highlighted what he sees as his top achievements during his four years in office.

Trump thanked his family in the video, saying they have filled his world “with light and joy.”

He also thanked Vice President Mike Pence, chief of staff mark Meadows and “all of the incredible people across our administration who poured out their heart and soul to fight for America.”

The tone of Trump’s message was in marked contrast to the fury of his reaction to the outcome of the November election, repeatedly and wrongly complaining that the vote had been “stolen”.

More than 60 legal challenges in Trump’s name were thrown out of court, ballots were recounted and results certified at state and national level, and the federal agency overseeing elections described the vote as the most secure in US history.