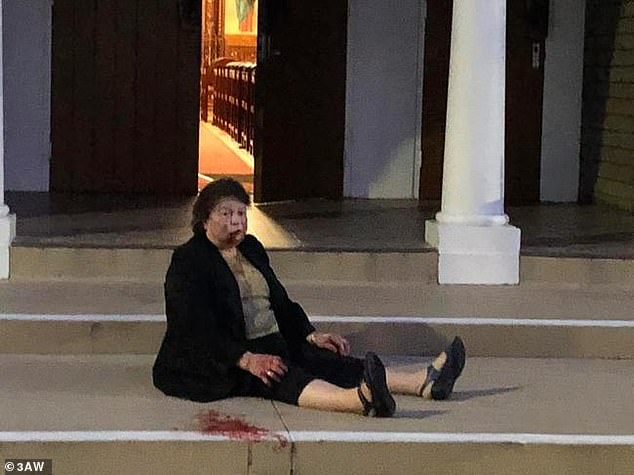 A 78-year-old woman was brutally bashed and left bleeding on the steps of a Melbourne church on Saturday morning.

The woman, named only as Penelope, was opening Saints Constantine and Helen Greek Orthodox church in South Yarra at 6am, as she has done every morning for 30 years, when she was attacked.

She suffered a broken wrist, a fractured pelvis and bleeding on the brain in two spots, but is in a stable condition in hospital.

She was opening the church when a male and a female approached her trolley before the man punched her and pushed her to the ground and began to kick her.

She was left on her own for 30 minutes when she was found lying on the steps by a street cleaner who called the police.

The attackers did take her trolley but it was later found in a nearby park with nothing stolen.

It’s too early to know if she will make a full recovery.

‘She is a beautiful lady and church is her life, and we will make sure she is looked after.’ She said.

Penelope’s daughter-in-law told Neil Mitchell on 3AW that she has remained positive.

‘She is eternally positive, but that’s just her nature. But she’s very unwell.’ She told 3AW.

She said the family was shocked but hoped the attackers would be caught in order to stop another attack.

‘We’re just shocked … and just devastated for her.’

‘We want the people who did this to be found, so firstly they can’t do it to anyone else and that they’re held accountable for what they’ve done.’ She said.

Her daughter-in-law was optimistic about her recovery.

‘She’s a really strong woman, so she’s very practical about it, she knows that is was a random thing’, she said.

The photo of the victim shows her looking stunning and defenceless, 3AW’s Neil Mitchell called the picture ‘heart wrenching’.

Penelope was unable to describe the attackers but did say they were ‘young’, both are still on the run and Victoria Police said the investigation is ongoing.