Pallbearers were pictured carrying a black coffin up the steps of St Mary’s Cathedral in Sydney’s CBD on Thursday morning.

A group of her employees stood outside the service, wearing black.

Ms Dite, from Templestowe Lower in Melbourne’s east, wore the dress she bought in 1967 to the Southside Six Hotel in Moorabbin on January 24, 1968.

Her family accepted the offer of a state funeral to honour the Italian-born icon who was a trailblazer for the Australian fashion scene for more than 50 years. 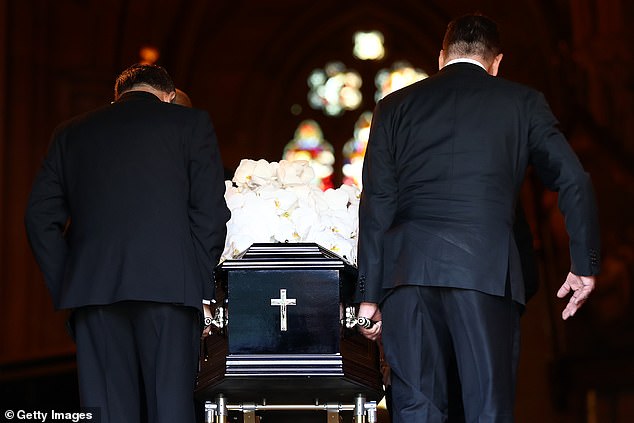 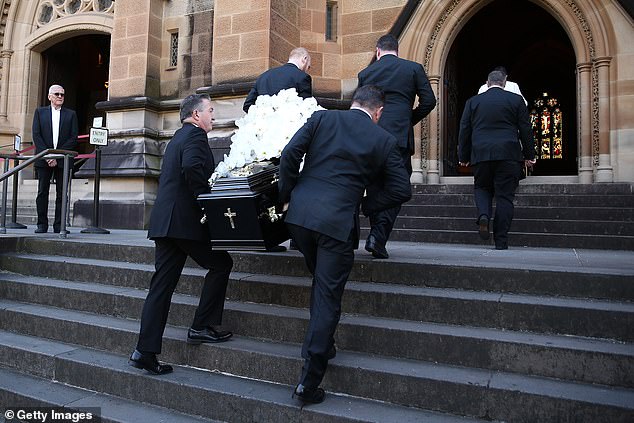 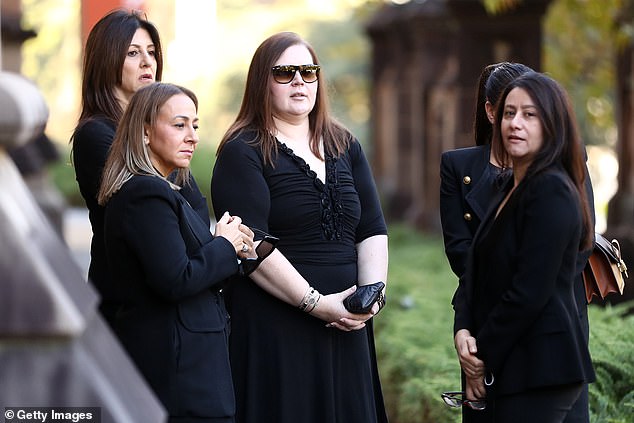 A group of her employees stood outside the service wearing black. Her family accepted the offer of a state funeral to honour the Italian-born icon

Zampatti suffered a catastrophic injury when she fell down steps while attending the opening night of the opera La Traviata at Mrs Macquaries Point on Sydney Harbour on March 26.

The 78-year-old was taken to St Vincent’s Hospital and died eight days later without ever regaining consciousness.

Zampatti has been credited with making Australian women feel more confident about their appearance by understanding what they wanted – elegant design and exceptional tailoring. 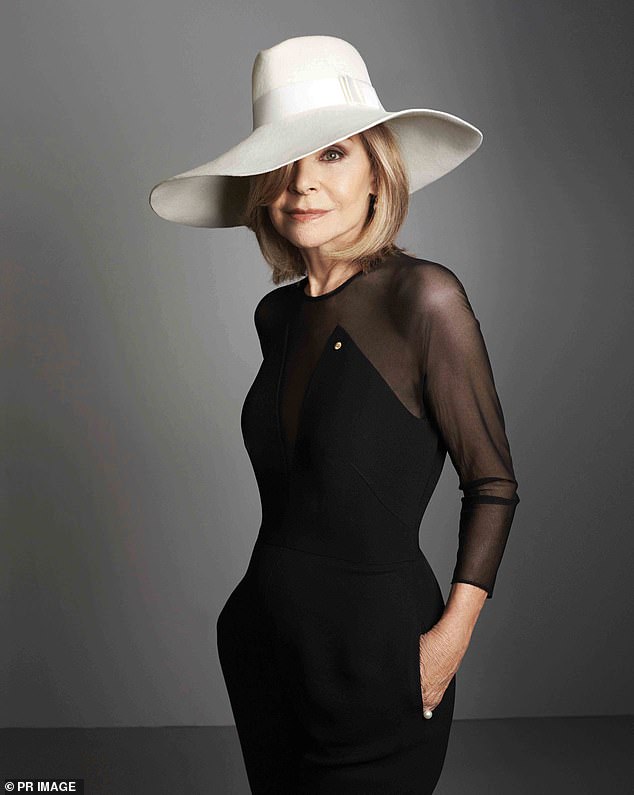 Fashion designer Carla Zampatti has been farewelled at a state funeral held at St Mary’s Cathedral in Sydney’s central business district. The 78-year-old, who died after a fall at the opera, had worked in the industry for 56 years

Her design ethos had always concentrated on what she called ‘elevated simplicity’ and was characterised by bold, clean lines with an Italian sensibility.

Politicians, business leaders, royalty and international celebrities favoured her pieces for being timeless yet on trend.

Zampatti has been a mainstay in the wardrobes of television presenters including Sonia Kruger, Liz Hayes, Georgie Gardner, Deborah Knight and Lisa Wilkinson.

But Zampatti was just as popular with ordinary Australian women as she was with her famous clothes horses and the public was warmly invited to attend the service.

Friend and former neighbour Kerri-Anne Kennerley has worn Zampatti since the 1980s and spoke of the designer’s impact after her death.

‘She was a really good woman’s woman, very kind and generous and bright,’ Kennerley said.

‘She was quite vocal before this #MeToo movement came along, she was one of the women who was always prepared to help anybody else.’

‘Jen and I are terribly saddened by the passing of Carla Zampatti,’ Mr Morrison said after her death. ‘We have lost a truly great and inspirational Australian.

‘Carla was an icon to the fashion industry, a pioneer as an entrepreneur and a champion of multicultural Australia. It was our great honour to have known her.

‘She was a very kind, strong, elegant and sincere woman. She will be sadly missed by family, friends and all who she inspired alike.

‘Her contribution to our nation will be timeless, just like her designs. We extend our deepest sympathies to her family.’

In the wake of her death customers have flocked to buy Zampatti tops and dresses, some reportedly in tears as they bought the last of the stock designed under her hand.

Carla Maria Zampatti was born in Lovero, about 100km from the Italian fashion capital Milan, on May 19, 1942.

Her family moved to Western Australia in 1950 and Carla crossed the country to settle in Sydney in her 20s.

She produced her first small fashion collection in 1965 and two years later launched Carla Zampatti Pty Limited. She opened a boutique at Surry Hills in 1972.

Zampatti became a multicultural business success story and champion of Australian women, thriving as a designer through decades of radical social change.

She produced pieces credited with empowering women – both professionally in the workplace, and privately when they dressed up for major life events.

‘For more than 56 years, Carla made women feel amazing in her creations, so they had the confidence to take on the world,’ a biography produced for her funeral said.

Zampatti was named Australian Businesswoman of the Year in 1980 and made a Member of the Order of Australia (AM) in 1987 for service to the fashion industry as a designer and manufacturer.

In 2004 Zampatti was appointed a Commander of the Order of Merit of the Italian Republic and four hears later was awarded the Australian Fashion Laureate Award, the highest honour in the local fashion industry.

A year later she featured on a 50c stamp as part of an Australian Legends collection.

Zampatti served as the chair of SBS from 1999 to 2009 and while in that position sent every staff member an email on their birthday.

Her AM was upgraded to a Companion of the Order of Australia in 2009 for her service through leadership and management roles in the fashion and retail property sectors, multicultural broadcasting, and as a role model and mentor to women.

Zampatti is survived by son Alexander Schuman and daughters Bianca Spender and Allegra Spender from her marriages to businessman Leo Schuman and former politician and diplomat John Spender.

Her family had requested that in lieu of flowers, donations be made to the Sydney’s Women’s Fund which funds grassroots charities supporting women and girls.

Coinbase CEO's net worth soars to $20billion thanks to company IPO