Fox News journalist is injured while reporting from Ukraine

Jen Psaki on Monday defended President Joe Biden’s actions against Russia after Fox News’ Jacqui Heinrich grilled the White House press secretary after one of her colleagues was injured in the Ukraine.

Fox News producers and correspondents on Monday reported that Benjamin Hall, who has been covering the war outside Kyiv amid an intensifying assault by Russian forces, was injured.

‘The president said back in February that the US would respond forcefully if Americans would target in Ukraine,’ Heinrich said. ‘One of my colleagues was injured today. We’re still waiting to hear if he’s okay. So what is that response going to look like?’

Psaki pointed out the economic sanctions Biden and U.S. allies have put on Russia, along with all the aid the United States has given the Ukraine.

”I think you have seen the president lead the world and taking, putting in place consequences,’ she said. ‘In terms of next steps, or what the next consequence would be. I don’t have anything to preview for you at this point in time.’

And Psaki refused to answer when Heinrich asked her what would be Biden’s ‘red line’ for more action.

‘I would say that at this moment in time, we have been hardly on the sidelines. We have been leading this effort around the world to respond to every step and every escalatory step that President Putin and the Russians are taking,’ Psaki said.

Biden vowed, in mid-February to respond ‘forcefully’ if Americans in the Ukraine were targeted. This was before Vladimir Putin invaded the Ukraine.

‘We are not seeking direct confrontation with Russia though I’ve been clear if Russia targets Americans in Ukraine, we will respond forcefully,’ Biden said at the time. 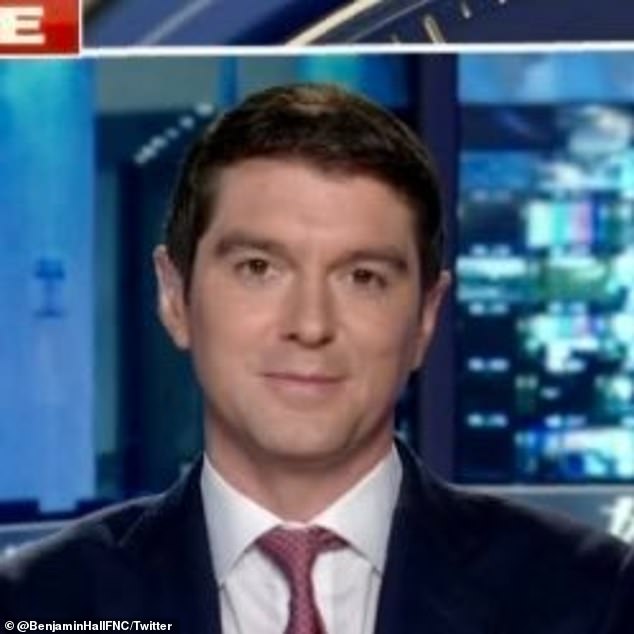 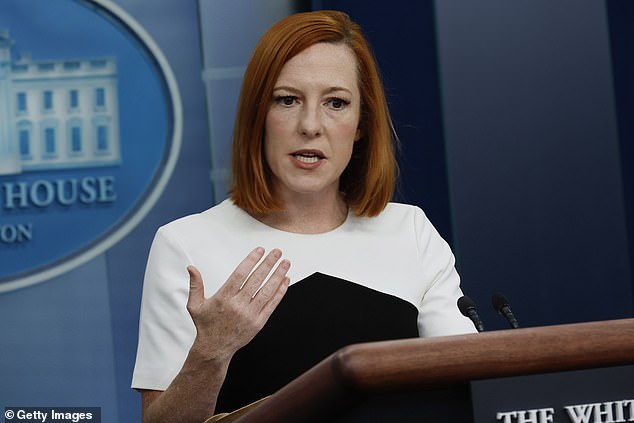 Psaki said the administration was keeping Hall in its thoughts.

‘Your colleague, Benjamin Hall, I know there’s not final reports yet or we would wait for your news organization to confirm those but our thoughts, the President’s thoughts, our administration thoughts are with him, his family and all of you at Fox News as well,’ Psaki said.

Throughout her press briefing on Monday, Psaki refused to offer what any ‘red line’ would be for a stronger U.S. response, including if Putin used chemical weapons in Ukraine. The White House has consistently refused to list any specific Russian action that would trigger an accelerated response.

‘We don’t like red lines around here so I’m not going to use that phrasing,’ Psaki said.

She noted the administration was trying not to escalate the conflict.

Hall, an American journalist, was reported to be injured on Monday but few details were available on his condition.

She shared a partially blacked out images of Hall’s press identification from the US Senate and House of Representatives.

Fox News journalist John Roberts said live on air: ‘This is news that we hate to pass along to you, but it’s obviously what happens sometimes in the middle of a conflict.

‘A Fox news journalist has been injured while newsgathering outside of Kiev, very few details but teams on the ground are working as hard as they can to try to gather more information. 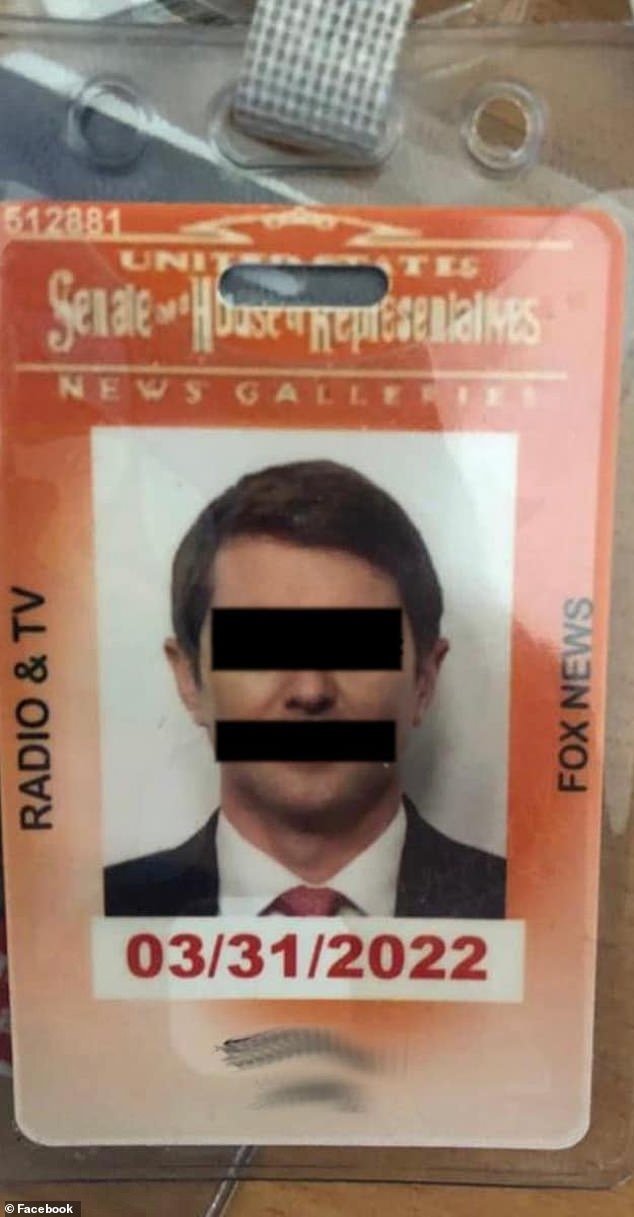 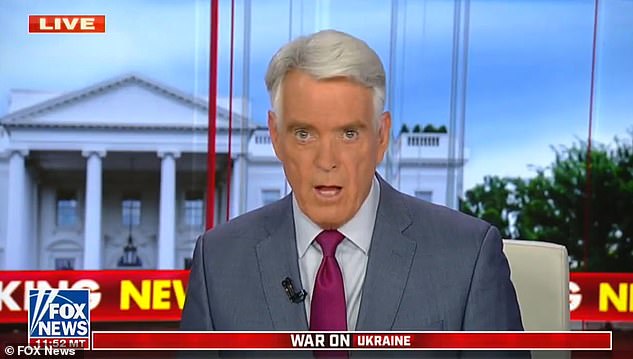 Fox News journalist John Roberts said live on air: ‘This is news that we hate to pass along to you, but it’s obviously what happens sometimes in the middle of a conflict’ 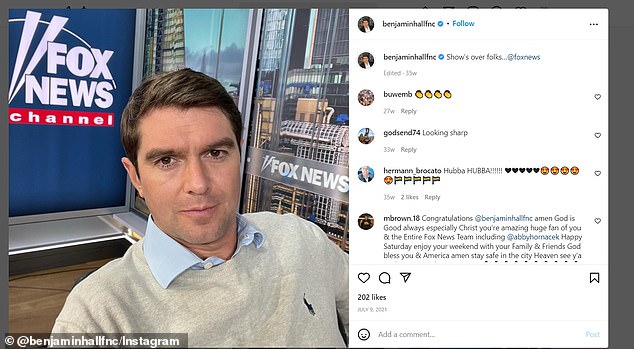 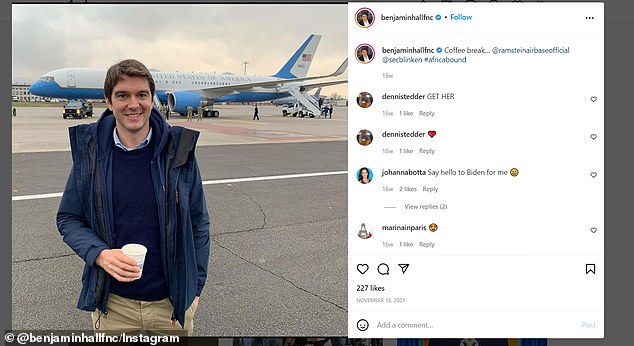 Benjamin Hall joined Fox News in 2015 and currently serves as a State Department correspondent based in Washington, D.C.; he is a longtime war correspondent who has covered conflicts in Afghanistan, Iraq, Libya, Syria, and other countries

‘A reminder of course that this is in a warzone, that information changes very quickly. We are working as hard as possible to get the best information that we possibly can and get all of the details on what has happened.’

He added: ‘The safety of our Fox team is of course of the upmost importance and our highest priority.’

According to his biography of FoxNews.com, Hall joined the network in 2015 and currently serves as a State Department correspondent based in Washington, D.C. He is a longtime war correspondent who has covered conflicts in Afghanistan, Iraq, Libya, Syria, and other countries.

Hall’s injury comes one day after American journalist Brent Renaud was killed in the Ukrainian city of Irpin.

‘We have a minimal level of details right now, but Ben is hospitalized and our teams on the ground are working to gather additional information as the situation quickly unfolds,’ Fox News chief executive Suzanne Scott said in a memo to staff.

‘The safety of our entire our entire team of journalists in Ukraine and the surrounding regions is our top priority and of the utmost importance,’ Scott added. ‘This is a stark reminder for all journalists who are putting their lives on the line every day to deliver the news from a war zone.’

During a Monday afternoon news briefing, Department of Defense Press Secretary John Kirby confirmed that Hall has been injured in Ukraine and was being treated at a hospital.

Fox News producer Sean Langille in a tweet praised his wounded colleague for doing a ‘phenomenal job’ covering the war and offered his prayers for a speedy recovery.

Bill Melugin, a Fox News correspondent base din Los Angeles, also tweeted about Hall saying that he was ‘injured today while news gathering outside of Kyiv. He is hospitalized right now, and we have no further details at the moment.’

During his tenure with the network, Hall has covered multiple foreign conflicts in Afghanistan, Iraq, Syria and Somalia.

Hall studied at Duke University and earned a BA from Richmond American University in London as well as a post graduate diploma in television journalism from the University of the Arts London. Hall is a dual citizen of both the US and the UK.

NBA: From Michael Jordan’s fax (I’m back) to Tom Brady’s message with millions of ‘likes’