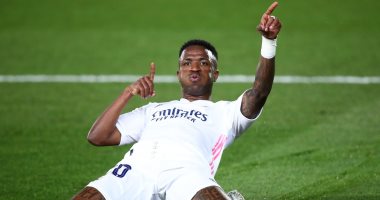 Former Real Madrid player Jose Maria Gutierrez “Guti” highlighted that the Brazilian striker, Vinicius, can reach “wherever he wants”, noting that he has the advantages that qualify him to become an important player in Europe.


In an interview with (EFE), Guti considered that the start of the season for his former team was “good, within what we expected”.

“It is true that he is good offensively and suffers a little defensively. He has to improve these things when he has to face big teams.”

“But on the offensive, he does a lot of good things, he scores a lot of goals. It’s a team that makes you want to watch.”

And whether he was frustrated after Paris Saint-Germain striker Kilian Mbappe did not join the royal in the last Mercato, Guti admitted that “it is not an easy process, everyone knew that.”

“In an important club with management, we know how it is and how it works,” he added. “They always want to have the best players and I can’t take their arm. It’s going to be complicated.”

And the former player explained that he will have to wait to see “whether he will be free in January and can come to Real Madrid.”

On his opinion, as a player who spent almost his entire career at Real Madrid, whether he would prefer to see Argentine star Lionel Messi in the Spanish Football League or elsewhere, he stressed that he always wanted “to be (La Liga) strong.”

Regarding the situation in Barcelona, ​​​​especially after he began his career in the Champions League with a 3-0 defeat against Bayern Munich at the Camp Nou, Guti said, “I do not know what conditions they are going through. I know that they were unable to renew with Messi, and that they have financial problems.”

“But I don’t know what moment they are going through. Barcelona has and will always have great players and if he is not able to sign new players, he will bring them from his youth team.”

Guti confirmed that Barcelona “is a team that will continue to compete, especially here in Spain. We will see later whether they can compete in Europe or not.”

Al-Luqaimat diet.. Lose 7 kilos of your weight in a week without deprivation

Al-Luqaimat diet.. Lose 7 kilos of your weight in a week without deprivation