Health chiefs today recalled dozens of batches of blood pressure pills because they were found to contain one of the world’s most explosive chemicals.

Three types of drugs known as irbesartan, losartan and irbesartan hydrochlorothiazide were pulled after the impurity was detected.

The Medicines and Healthcare products Regulatory Agency, which polices the safety of drugs used in Britain, said the affected batches contained azido-tetrazole.

Government officials warned the substance – considered by some to be the world’s most explosive chemical – may increase the risk of cancer.

Some of the pills – which are taken by millions of Britons – have been on the market for nearly two years.

It is the latest in a line of drug recalls of sartan-type medications, which may have been exposed to cancer-causing chemicals in factories in China and India.

The MHRA insisted the measure was merely a precaution and there was no proof it has caused any harm to patients. 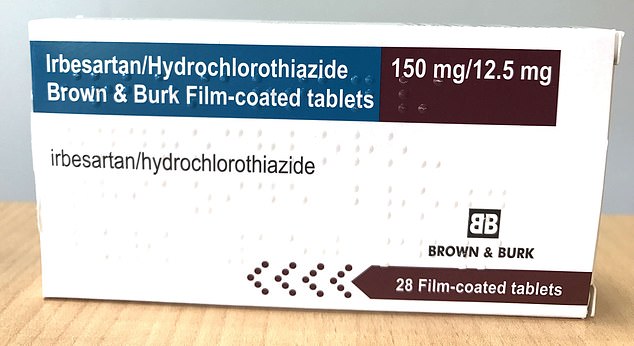 There is also no evidence any of the pills have exploded.

The MHRA said the move only applied to pharmacies and wholesalers stocking the 31 batches supplied by Bristol Laboratories Limited, Brown & Burk UK Limited and Teva UK Limited, some of which were first distributed in September 2019.

Britons taking the affected pills were told not to immediately stop taking them because suddenly stopping a course of medicine can be risky.

2012 – The blood-pressure medication valsartan is thought to have been contaminated with the cancer-causing, rocket-fuel chemical NDMA as far back as 2012.

European regulators warned last year the medication’s main manufacturer in China – Zhejiang Huahai Pharmaceutical – changed its manufacturing process seven years ago, which may have been to blame.

Many EU authorities then followed suit.

The European Medicines Agency said it was working to establish how long, and at what levels, patients might have been exposed to NDMA.

July 17 – The US Food and Drug Administration ordered a ban on valsartan’s prescription.

July 30 – China’s National Health and Family Planning Commission said the drug must not be used for diagnosis or treatment.

The government-run body issued an alert over four batches of the medication and pulled the products – made by Actavis, now known as Accord – as a ‘precautionary measure’.

‘We’re recalling batches of certain sartan-containing as precautionary measure while we continue our investigation.

‘It’s important that healthcare professionals check their stock to quarantine and return these batches.

‘If you’ve been taking one of the affected products, speak with your doctor or pharmacist before stopping any treatment – they can address any concerns and can advise you on the best course of action.’

Cambridge scientist Dr Ljiljana Fruk described azido-tetrazole as the the world’s ‘most explosive chemical’ in 2019.

Speaking on the BBC’s The Naked Scientists radio show, she said: ‘So the most explosive chemical was made in 2011 in the lab.

‘[It] Never went out of the lab, it was made in a special chamber and it’s called azidotetrazole.

‘So that’s a molecule that has 14 nitrogens in its own structure, and because of these constrained nitrogen bonds it’s very explosive.

Dr Fruk, from Cambridge’s Department of Chemical Engineering and Biotechnology, added: ‘Some scientists said that this molecule could explode even if you look at it, because you know it really reacts on a tiniest amount of pressure.’

Officials have yet to explain how the contamination may have occurred.

But impurities are often caused by contamination in factories or brought on during the manufacturing or storage process.

Exposure to light, temperatures or even reactions with the container that holds the drug can trigger chemical changes.

Overall, more than two-thirds of all active drug ingredients originate in China and India, industry experts estimate, with China accounting for the lion’s share.

NHS figures reveal more than 2million prescriptions for drugs containing irbesartan were dished out in England in 2017.

It comes after a similar recall saw thousands of blood pressure pills pulled from pharmacy shelves in January after carcinogenic ingredients were found in them.

Four types of medications branded as irbesartan hydrochlorothiazide were contaminated with N nitrosodiethylamine (NDEA) contamination, a chemical once used in rocket fuel.

Around 165,000 people are prescribed irbesartan hydrochlorothiazide every year for hypertension – the medical term for high blood pressure.