Less than 500,000 adults are now being vaccinated each day – down from a peak of 3.4 million in April, The Washington Post reports.

Currently, 51.5 percent of Americans – or 170. 8 million people – have received their first COVID-19 vaccine. That number includes adults and also children over 12 who are eligible for the shot. When counting just adults, 63.5 percent have had at least one jab.

In order to reach the 70 percent goal by July 4, 16 million more adults will need to have their first shot in the next 28 days.

According to the publication, that is now going to be an extremely hard task, with officials missing preliminary targets by almost two million doses last week.

There are only 2.4 million adults who got their first shots last week, the Post reported. Officials calculate that number needs to be 4.2 million a week to meet Biden’s July 4 goal.

The slowdown is throughout the U.S., the Post reported: Every state’s vaccination rates are down by at least two thirds since their peaks. The South, especially, is dragging down national numbers.

Alabama, for instance, has only had 36.2 percent of its adult residents receive their first dose of the vaccine, and last week the state had ‘just four people per 10,000 residents get vaccinated’. 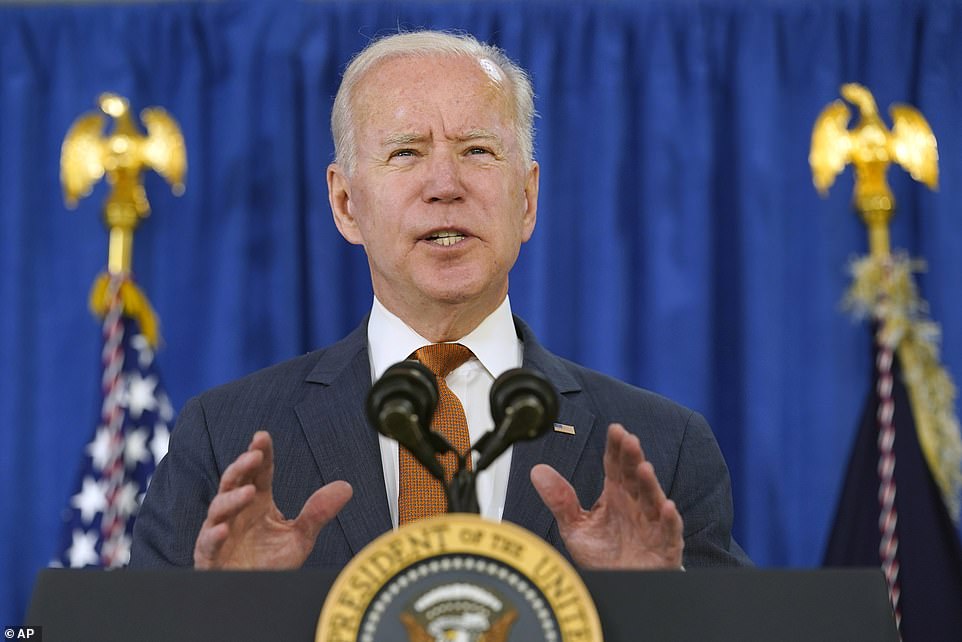 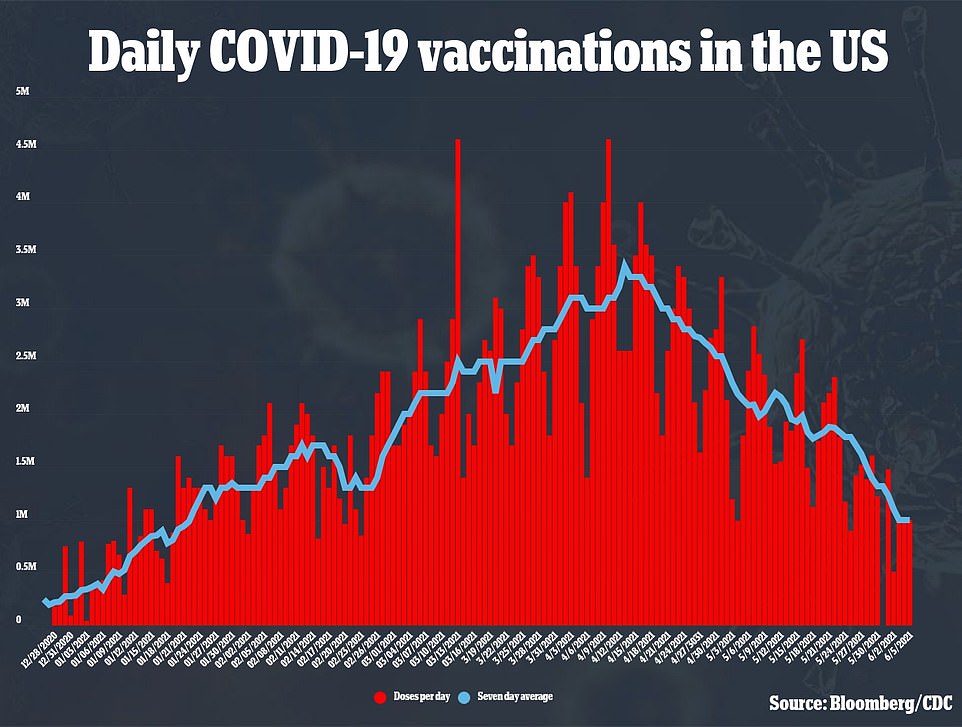 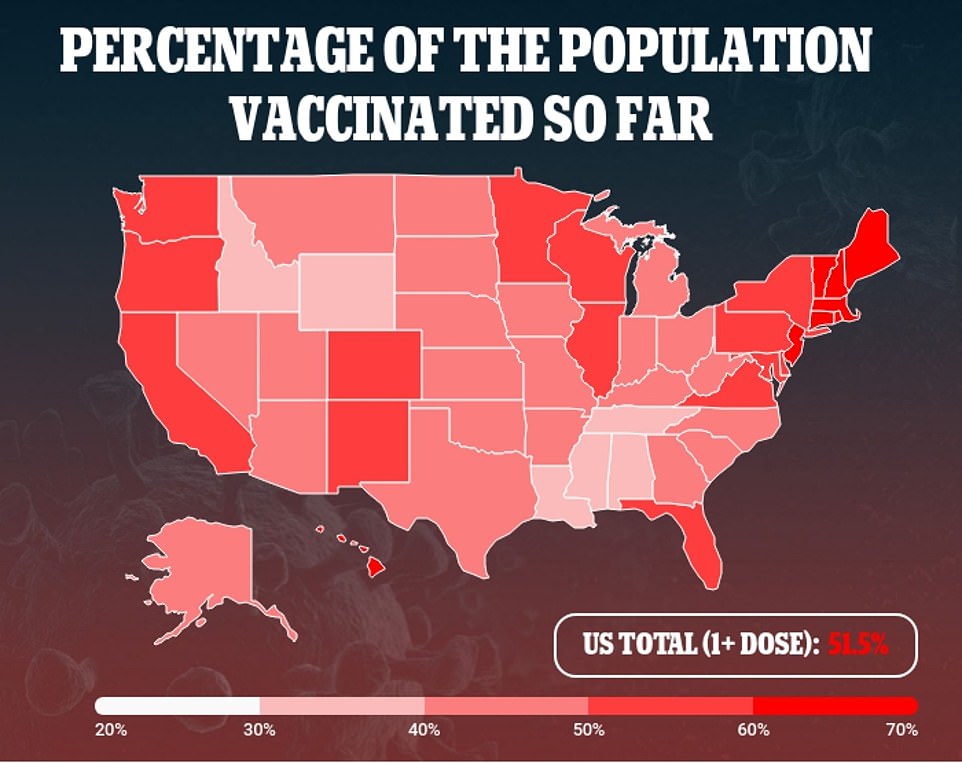 Most states on the East and West coasts, however, are surging ahead of expectations.

Several others, including New York, California and Oregon, have already had close to 60 percent of adults receive their first vaccine dose and will likely reach Biden’s target.

To get 16 million more Americans to roll up their sleeves, the president has announced incentives including free Anheuser-Busch beer for 200,000 people and a visit to the White House.

Other states have tried stunts like lotteries for cash prizes.

Additionally, pharmacies that have teamed up with the White House will be open for 24 hours on certain days and centers will be offering free childcare for parents

Late last week, TODAY host Savannah Guthrie asked CDC Director Dr Rochelle Walensky if the current pace of vaccinations is enough to hit the president’s target or if a push is need to increase the daily numbers.

She appeared to side-step the question, saying that she anticipates the incentives will ‘meet [people] where they are’ by providing people with more information and access to shots. 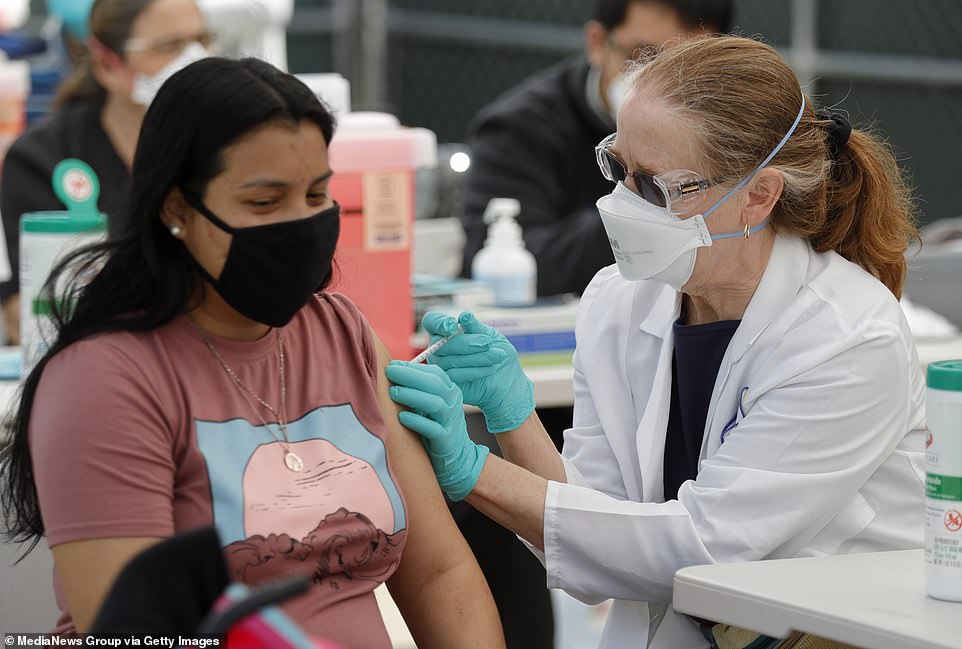 To get 16 million more Americans to roll up their sleeves, Biden announced incentives including free Anheuser-Busch beer for 200,000 people and even a visit to the White House 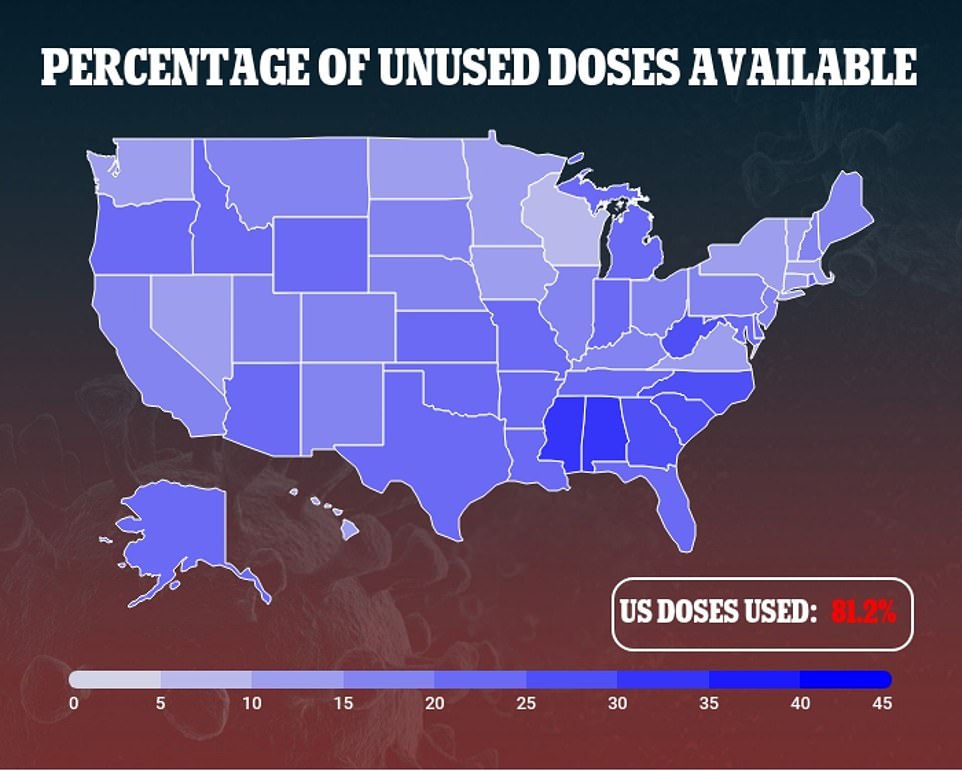 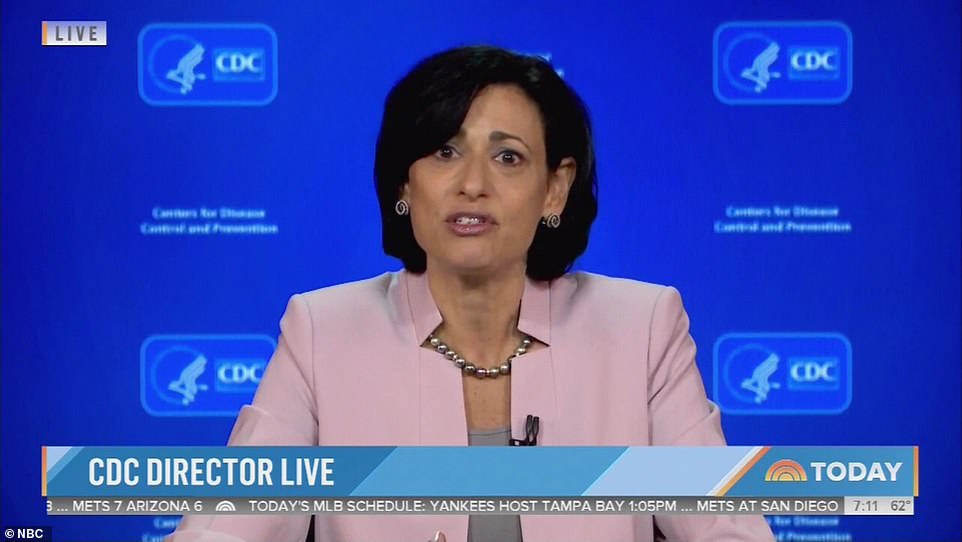 CDC director Dr Rochelle Walensky could not answer questions Thursday about how the US would meet this threshold, instead replying that ‘every shot in the arm is a win’

‘I think that any singular day’s counts of how many vaccines we’re doing is not necessarily reflective. We’ve launched this push now. We anticipate we’ll be able to reach more and more people,’ she answered.

‘Every shot in every arm is a win because that person is now safe and protected from getting COVID-19.’

Guthrie also asked if the 70 percent benchmark is a goal for political purposes or if there is a public health threshold.

‘We know that the more and more people that get one vaccine and then two – get fully vaccinated – the more we as a nation are protected,’ Walensky said.

‘We know that the vaccine not only protects individuals, it protects communities, it protects their families. And so the more people who get vaccines…there is no magic target for herd immunity. 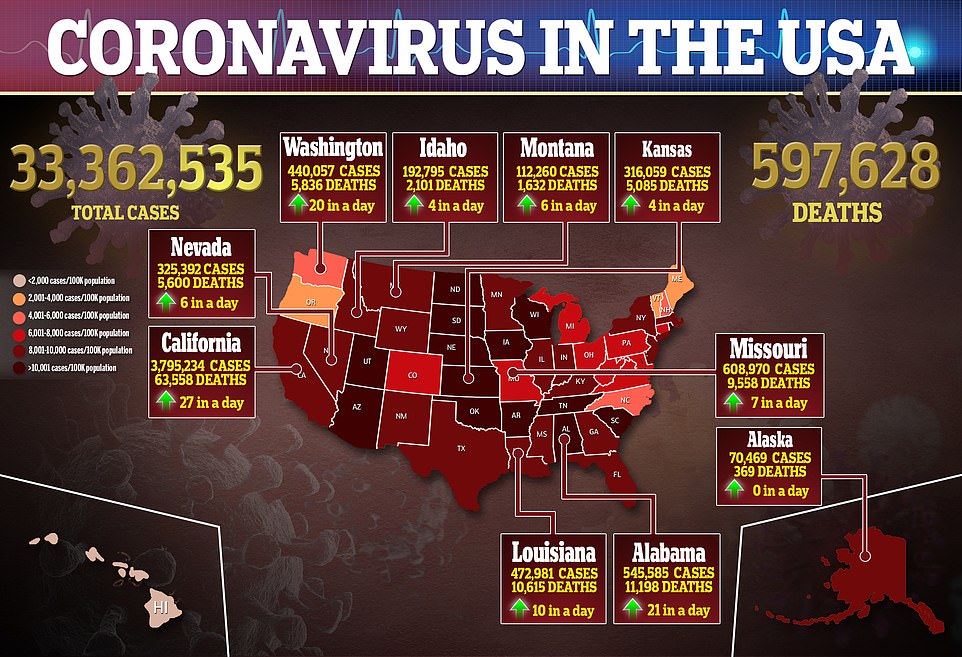 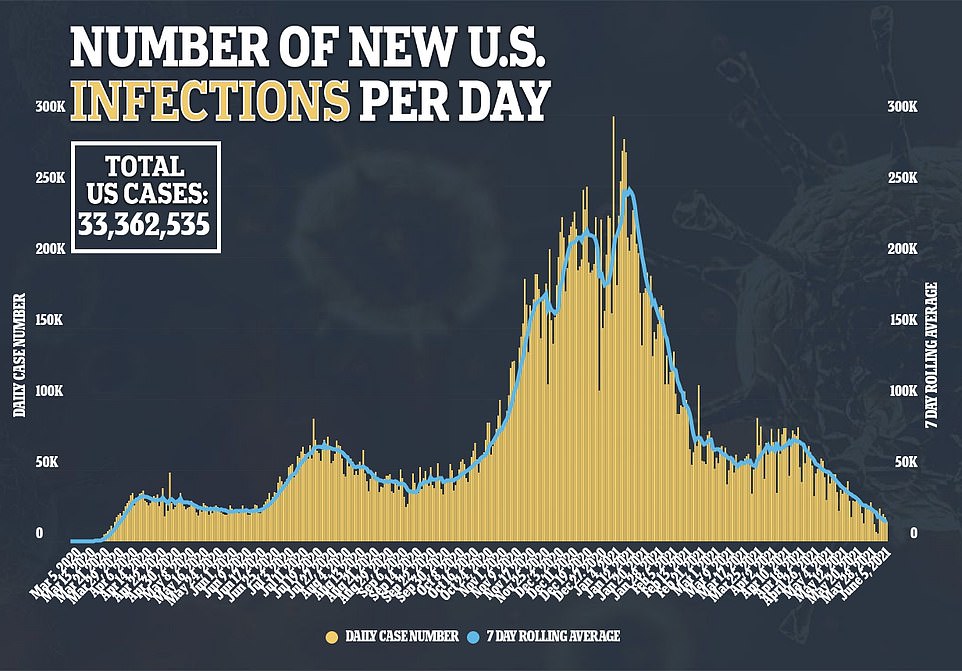 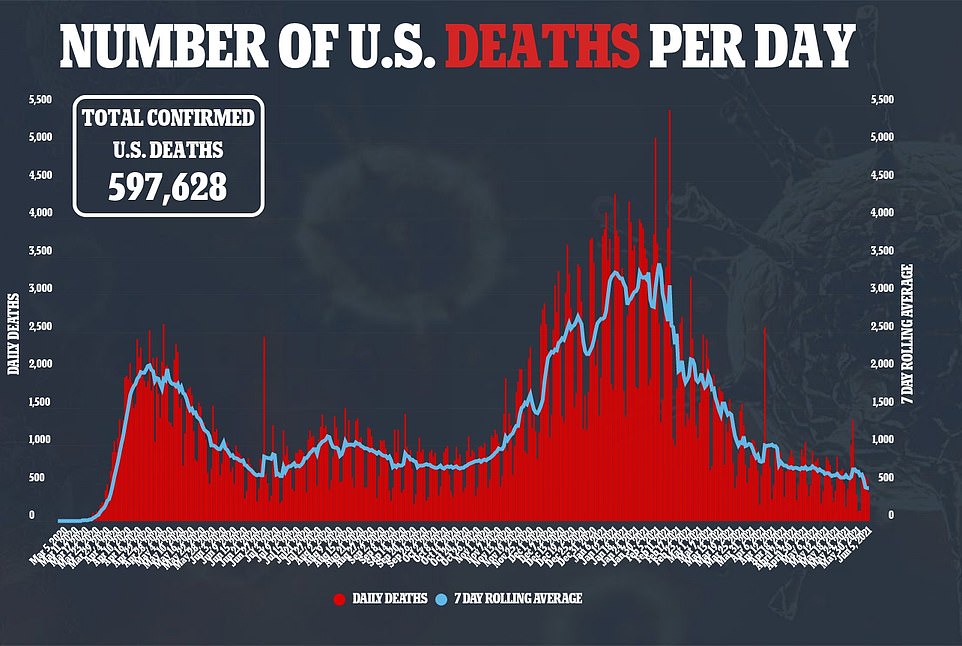 Despite fears around the vaccine race, COVID deaths and infections continue to decline.

On Sunday, the US reported 376 new COVID deaths, down from the 7-day rolling average of 437.

Meanwhile, 13,908 new infections were reported across the country. That is also down on the 7-day rolling average of 14, 592.

Millions of mice are rampaging across Australia. The twist in the tail? Their ancestors were British

Professional cleaner reveals the secret to getting 'high gloss' floors

National Veterans Memorial and Museum: Where every veteran counts

South Africans get their tongues round Gqeberha, new Xhosa name for Port Elizabeth

As Democrats try to push the For the People Act through the Senate, some of the party's...