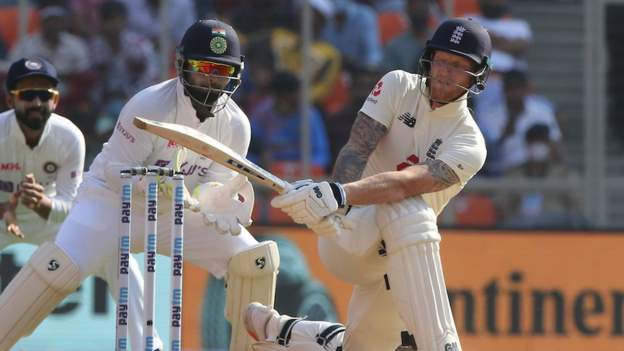 England’s batsmen played “like rabbits in headlights” on the first day of the third Test against India in Ahmedabad, says former captain Michael Vaughan.

“They didn’t know how to play or rotate the strike,” Vaughan said on The Cricket Social.

“India know that this England side, against this spinning ball, don’t have skilful players who know how to play it.”

Captain Joe Root’s 17 was the next highest score, with India spinner Axar Patel taking 6-38 and Ravichandran Ashwin picking up 3-26.

“The England players don’t seem to be improving and that is a concern,” Vaughan added.

“A lot of the batsmen have been in the sub-continental conditions for a number of weeks now and would have been facing lots of spin.”

‘England’s averages must improve before Ashes’

Vaughan says England’s top six must improve before the Ashes tour to Australia later this year, with only Root averaging above 40 in Test cricket.

“Joe Root is very near to averaging 50 but then the other batsmen are in the 30s,” he said.

“Dom Sibley has had one good score of 87 on a flat surface in the first Test, Ollie Pope is a young promising player yet only averages 33 in 15 Tests and Ben Stokes doesn’t look like he’s got his set-up right to face Ashwin or Patel.

“If you think you’re going to win in Australia by one player having a stormer then that’s very risky.”

Jonny Bairstow – who was dismissed without scoring batting at number three – returned to the side having gone home for a break after playing in the series win over Sri Lanka earlier this year.

“I don’t understand the philosophy of taking players out of the team to fly home and then to come back and expect them to perform,” Vaughan said.

‘This is nowhere near over’

Kent batsman Crawley, playing in his 11th Test, has scored four half-centuries and one ton since making his debut in 2019.

He missed the opening matches of the series after spraining a wrist in a “freak accident” before the first Test.

Despite the one-sided nature of the first day, he says the third Test “is nowhere near over” and is confident England’s bowlers can bounce back on Thursday.

“There is absolutely a way back,” the 23-year-old said.

“We could bowl them out for late 100s or early 200s and then if we can get any sort of lead from there then we got a chance in the fourth innings.”