An Irish backpacker accused of drug supply and partaking in a gruesome assault which left a man with a severed ear attempted to hide her ankle monitor as she arrived at court with her mother at her side.

Katie Eileen Murtagh, 26, rugged up in a fashionable leopard print fur coat and slacks as she braved Sydney’s cold snap to appear at Central Local Court on Tuesday.

But when a breeze swept up the edge of her pants, Murtagh’s bulky ankle monitor was clearly visible above her ballet flats.

Murtagh was granted bail after posting a $100,000 surety that she wouldn’t try to flee the country as she remains before the courts accused of wounding a person with intent to cause grievous bodily harm, supplying drugs and dealing in proceeds of crime.

Police allege she and her boyfriend Patrick Earle were involved in an altercation on August 29, 2020 which culminated in Oliver Solan being found bleeding out in the foyer of their Randwick apartment in Sydney’s east. 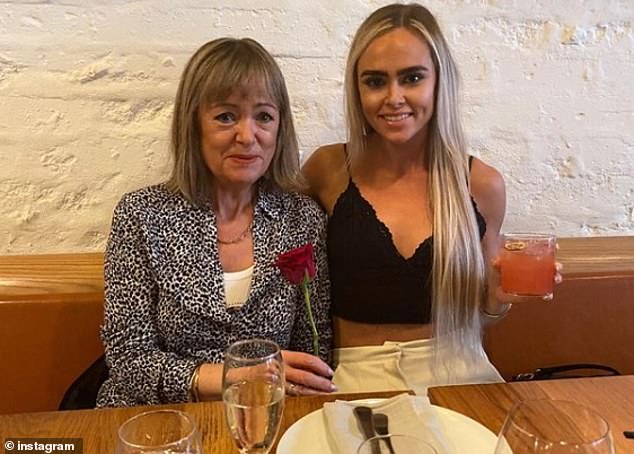 On Mother’s Day, she shared photos sipping on a drink at a restaurant with her mum. She is not permitted to leave home without her mother present 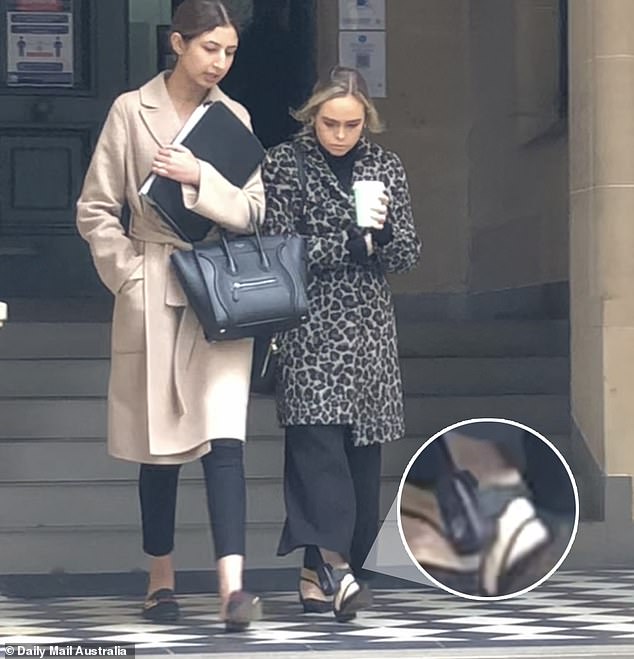 Katie Eileen Murtagh, 26, rugged up in a fashionable leopard print fur coat and slacks as she braved Sydney’s cold snap to appear at Central Local Court on Tuesday. But when a breeze swept up the edge of her pants, Murtagh’s bulky ankle monitor was clearly visible above her ballet flats 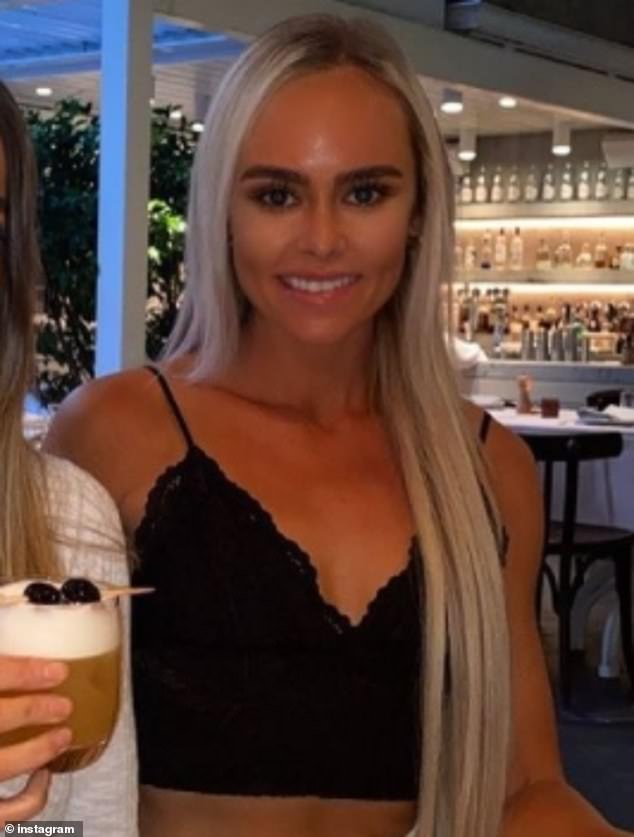 Murtagh was pictured at The Ivy in April (pictured) celebrating a friend’s birthday. The photo was cropped so as not to include her ankle monitor – and her mother was nowhere to be seen

The 26-year-old travel and tourism college student has made a concerted effort to hide the tracking device since it was first attached, an order she was forced to comply with when she was released from custody.

Murtagh was supported by her mother on Tuesday, who must accompany her whenever she leaves home, as stipulated by her strict bail conditions.

She successfully appealed to the court to have that order amended to allow her to attend college classes without her mum, but at all other times she must be supervised.

In the months since her arrest, Murtagh has been spotted dining in venues across Sydney’s east, but her glamorous photos rarely include full body shots that would risk showing her ankle monitor – or her mother. 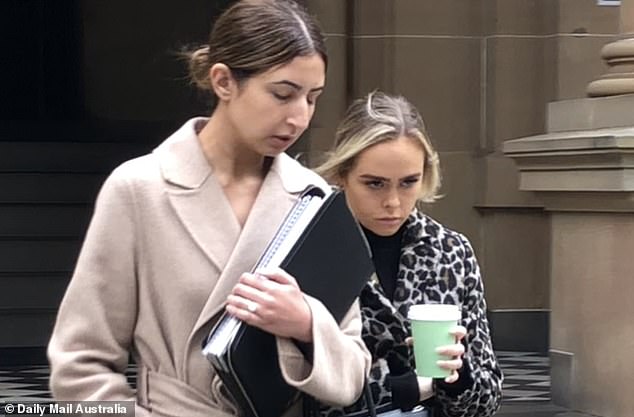 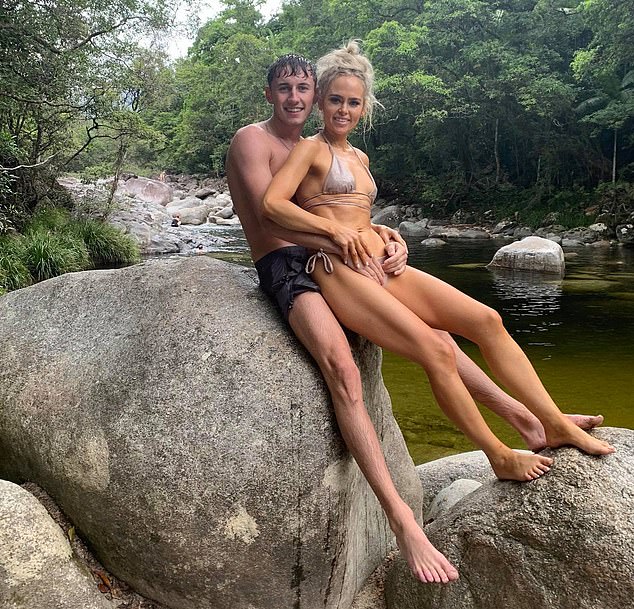 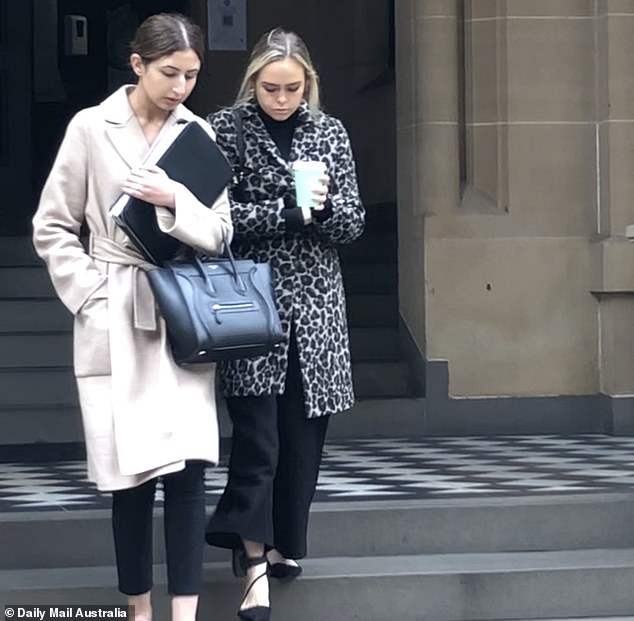 The 26-year-old travel and tourism college student has made a conceited effort to hide the tracking device since it was first attached, an order she was forced to comply with when she was released from custody

Three of her four co-accused remain behind bars and did not apply for bail when their matters were mentioned on Tuesday.

Police allege Murtagh and Earle had been drinking in the eastern suburbs when they invited Mr Solan back to their home on August 29.

An argument broke out and Mr Solan allegedly attacked Earle, leaving him with a dislocated arm and cuts to his head.

Police allege Earle contacted his co-accused, John Dunlea, who arrived at the apartment with Patrick Farrell and Christopher Morrisson. Each of the men have since been charged with wounding with intent to cause grievous bodily harm.

The alleged victim was found bleeding out in the hallway of the couple’s apartment suffering from a punctured spleen which was later removed in surgery. 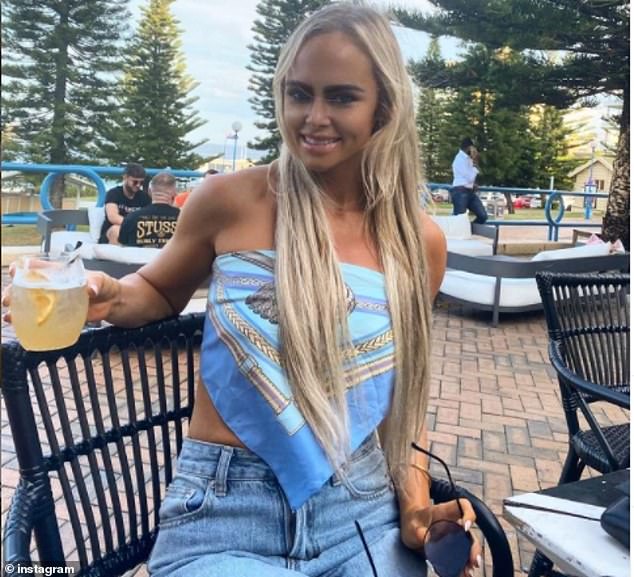 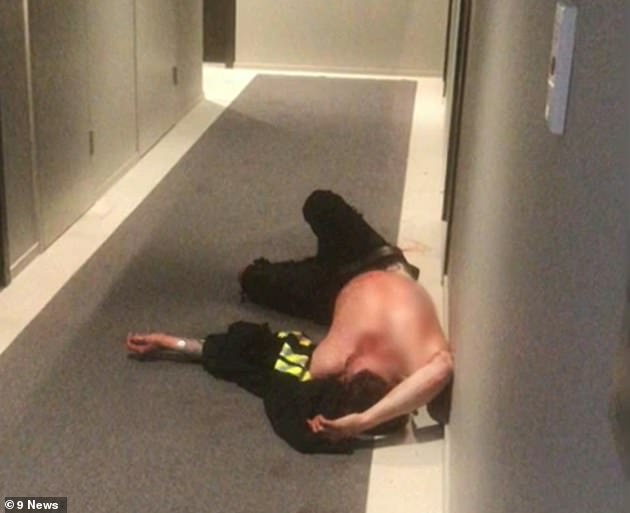 Neighbours found victim Oliver Solan, 30, barely conscious in a hallway at a Young Street apartment block in Randwick, in Sydney’s east, about 8.40pm on Sunday

His ear was also partially severed and he had several other stab wounds on his body.

Detectives further claim Murtagh was aware of the consequences of inviting and letting the trio into her apartment.

CCTV footage showed the group allegedly fleeing the apartment after Mr Solan’s bloodied body was dragged into the hallway.

The relationship between the group is not yet apparent, but police claim Murtagh and Earle invited Mr Solan back to their apartment after a night out in Sydney’s east.

Murtagh and Earle are both facing drug supply charges which were laid after their arrests. 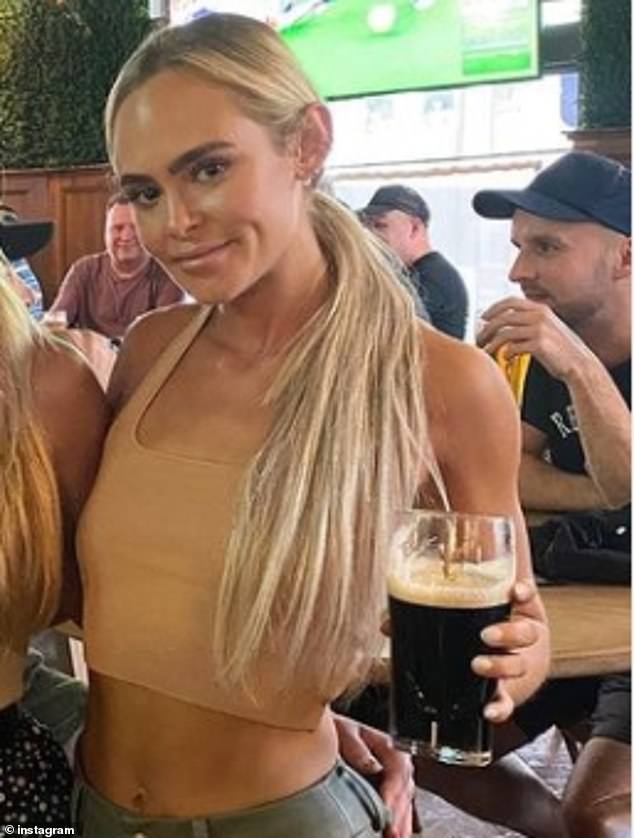 On another occasion days after St Patrick’s Day, Murtagh was pictured drinking a Guinness at a bar in Sydney’s east with two friends 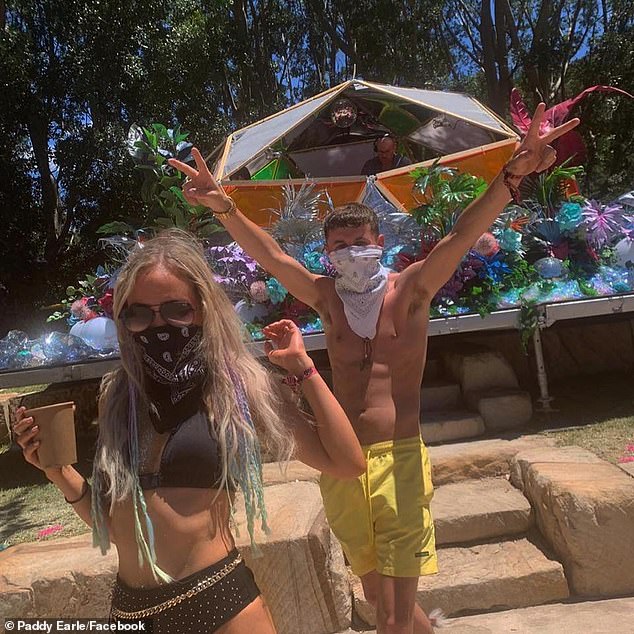 Any references to Earle have disappeared from Murtagh’s social media accounts, which now feature several sombre quotes about ‘never looking back’ and ‘gratitude changing everything’. Pictured: Earle and Murtagh before their arrests

Dunlea was granted bail along with Morrisson and Murtagh, but the court heard he breached the conditions ‘soon after his release’, and has been in custody ever since.

Meanwhile Farrell, who remains behind bars, is pushing the court to have his matter dealt with separately to his co-accused.

His lawyer told the magistrate that Murtagh and Earle are now facing ‘a number of drug charges which have nothing to do with our client’.

‘[Farrell] is in a different position to those two in respect of those charges… Which aren’t related to him.’

Murtagh’s restrictive bail conditions prohibit her from travelling out of the state of New South Wales and required her to surrender her passport. 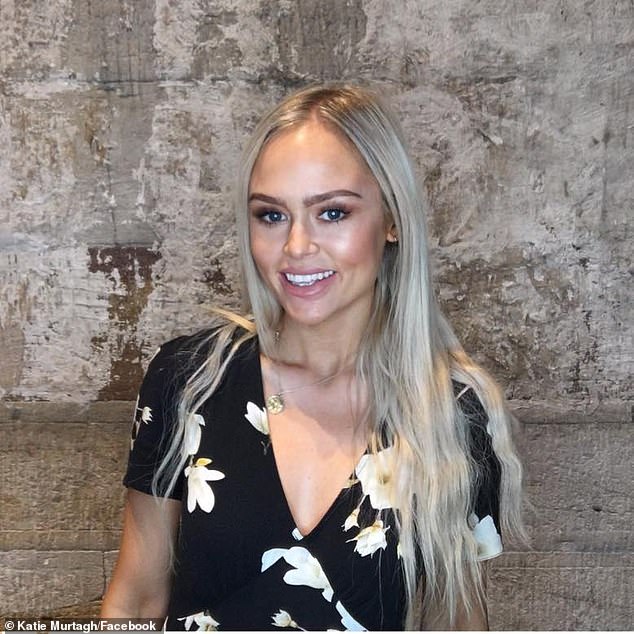 Earle’s girlfriend, 26-year-old Katie Murtagh, let his three friends in before allegedly going to hide in a bedroom as the alleged fight ensued

She must report to Maroubra police station twice daily – once between 6am and 10am and again between 5pm and 9pm – and must be available to present herself at her front door after her 9pm curfew if required to do so.

Should she defy any of the court ordered bail conditions, Murtagh’s guarantor risks losing the $100,000 cash surety that was posted to secure her freedom.

In spite of the strict court orders, Murtagh appears to be living a relatively unchanged life in Sydney, enjoying trips to the beach and day drinking with friends.

On Mother’s Day, she shared photos sipping on a drink at a restaurant with her mum, while just weeks earlier she was pictured at The Ivy celebrating a friend’s birthday.

Other pictures reveal she still frequents eastern suburbs bars and cafes, including The DOG Hotel in Randwick and Estate in Coogee Beach. 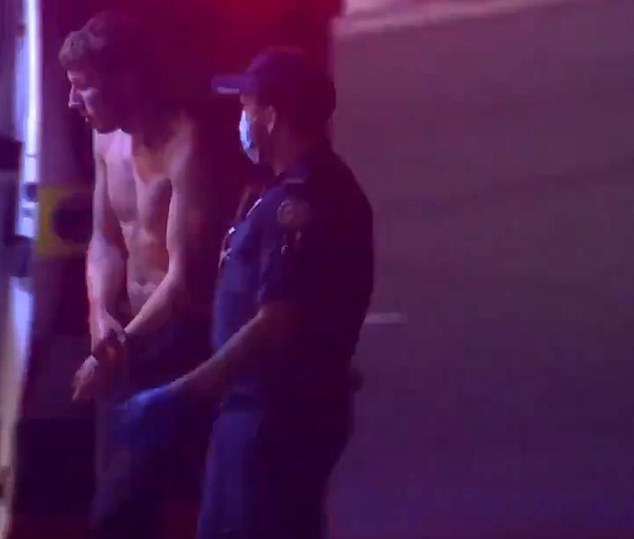 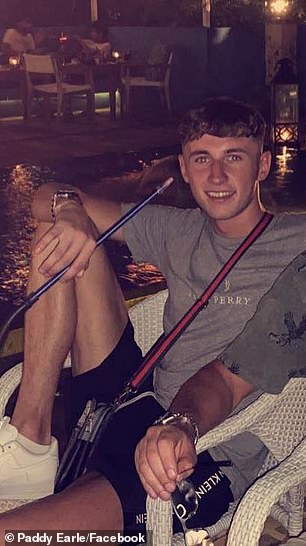 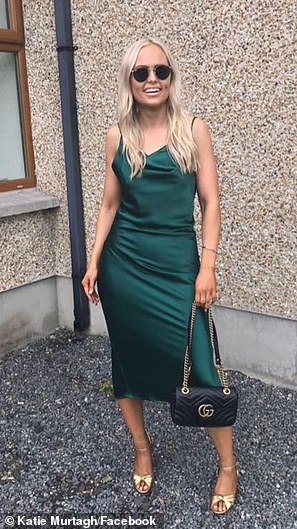 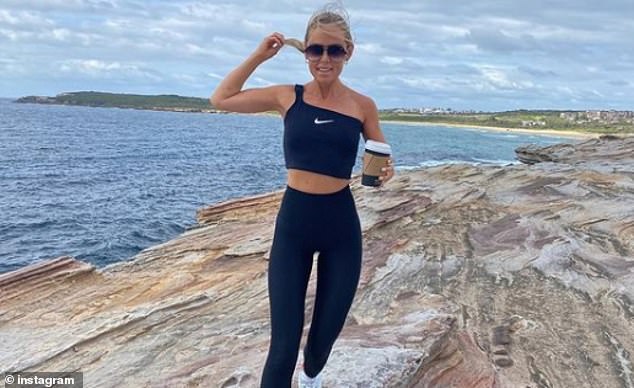 Murtagh has also enjoyed trips to the beach (pictured) and hikes despite her strict bail conditions, which she begged to have amended in court on Tuesday

As stipulated by her bail conditions, Murtagh’s mum was required to be present at each of the recent outings – though she rarely appears in the glamorous photos.

Any references to Earle have also disappeared from Murtagh’s social media accounts, which now feature sombre quotes about ‘never looking back’ and ‘gratitude changing everything’.

For the second time in a row, Murtagh arrived at court after her boyfriend’s matter had already been heard.

She also did not cross paths with her co-accused, Morrisson, who also remains on bail.

As of February, Murtagh and Earle were still reportedly together and she craned her neck just to get a brief look at him when he appeared via audio visual link. 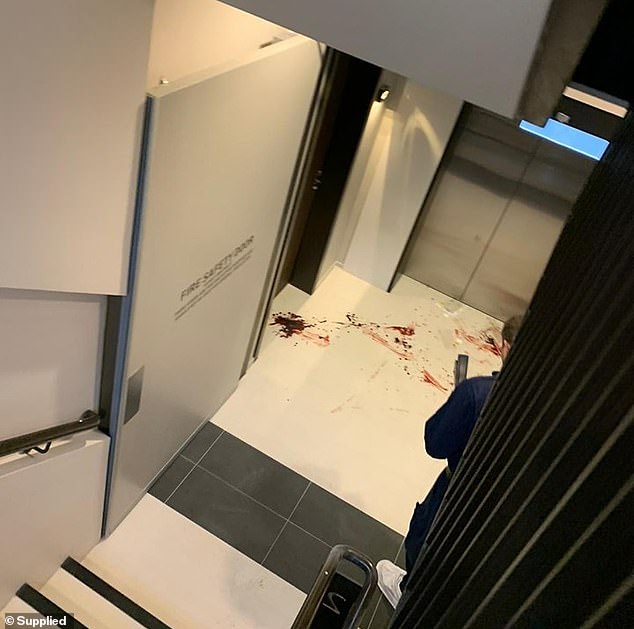 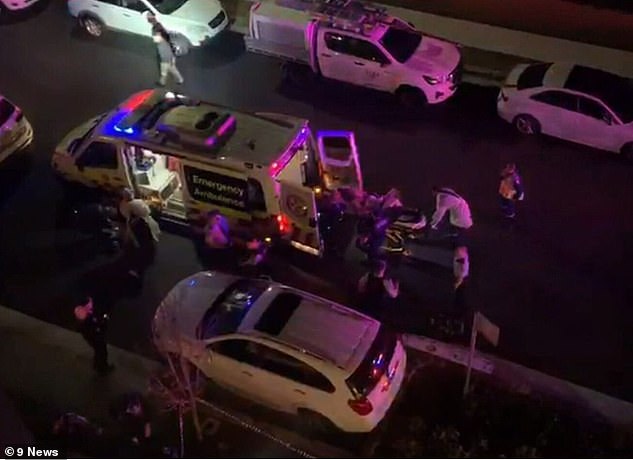 Christian Eriksen 'fine under circumstances' after cardiac arrest at Euro 2020