Jeffrey Epstein‘s Upper East Side New York City townhouse has just had its sale price slashed by $23 million after six fruitless months on the market.

The sprawling East 71st home is now listed for $65 million, a decrease of 26 percent from its original asking price of $88 million, according to the Wall Street Journal.

First put up for sale in July, along with another of his mansions in Palm Beach, Florida, the listing was posted just under a year after Epstein was found dead in his Manhattan jail while awaiting trial on a slew of sex trafficking charges.

The millionaire financier reportedly abused dozens of girls as young as 14 at the opulent property, before his arrest in July 2019.

He reportedly installed hundreds of pinhole cameras throughout the home to spy on his victims in ‘private moments’ in bathrooms and bedrooms. The house was also said to feature an array of bizarre decor, from an oil painting of Bill Clinton in heels and a blue dress, to a large taxidermy tiger.

In it’s listing for the property, Modlin Group writes: ‘This Mansion presents a once in a life-time opportunity to own the largest single-family home in New York City.

‘This historic landmark could easily present itself as a palatial consulate, embassy, foundation, or a museum to once again house some of the world’s greatest works of art.’

The sprawling East 71st home is now listed for $65 million, a decrease of 26 percent since it was first listed in July 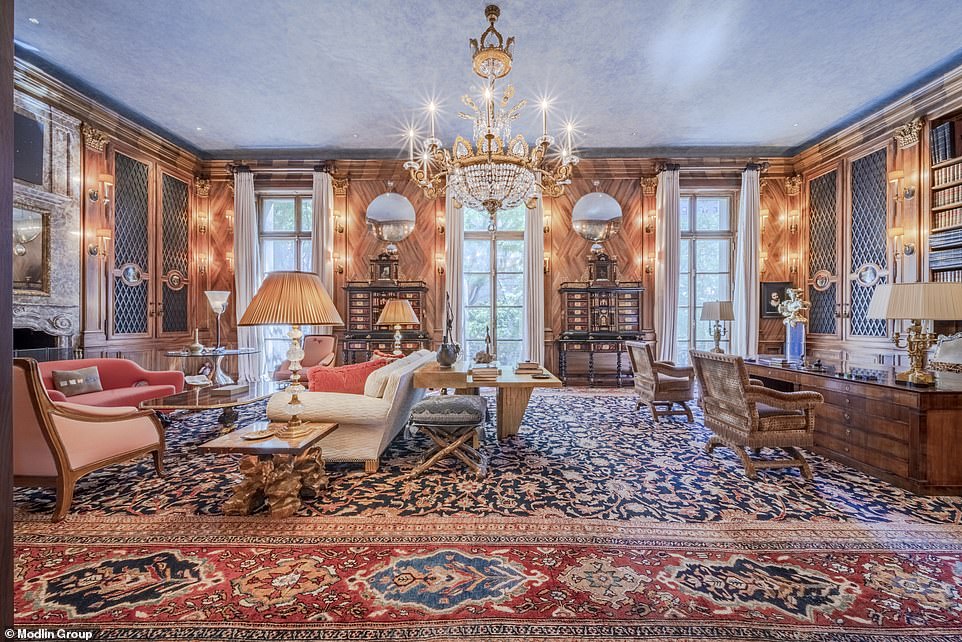 The 50-foot-wide, 100 feet deep property is considered one of the city’s most prestigious homes, with a vast 28,000 square feet of space spread over seven stories (Image shared by Modlin Group, who are representing the property) 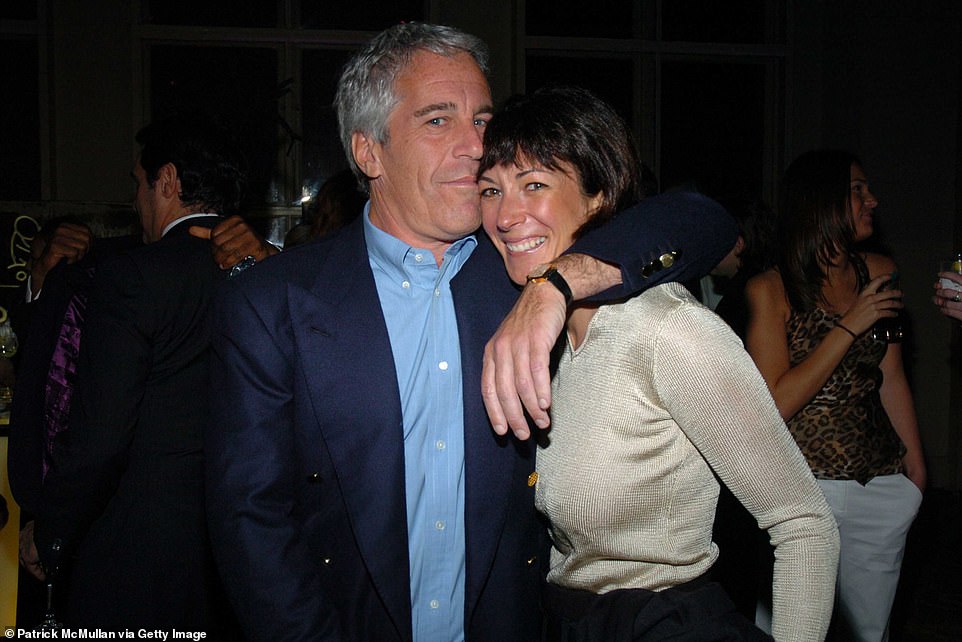 The listing was posted just under a year after Epstein was found dead in his Manhattan jail while awaiting trial on a slew of sex trafficking charges.

The 50-foot-wide, 100 feet deep property is considered one of the city’s most prestigious homes, with a vast 28,000 square feet of space spread over seven stories. Its new asking prices works out to be about $2,300 per square foot.

It features an impressive neoclassical stone facade – made of French limestone – that is decorated with ornate carvings and picturesque balconies.

The mansion also has an imposing 15-foot tall front door, which once featured the letters ‘J.E’ in raised brass but they’ve since been removed.

Modlin’s listing makes no mention of Epstein and features only one photograph inside the home, one external image, and one picture of the home’s balcony. 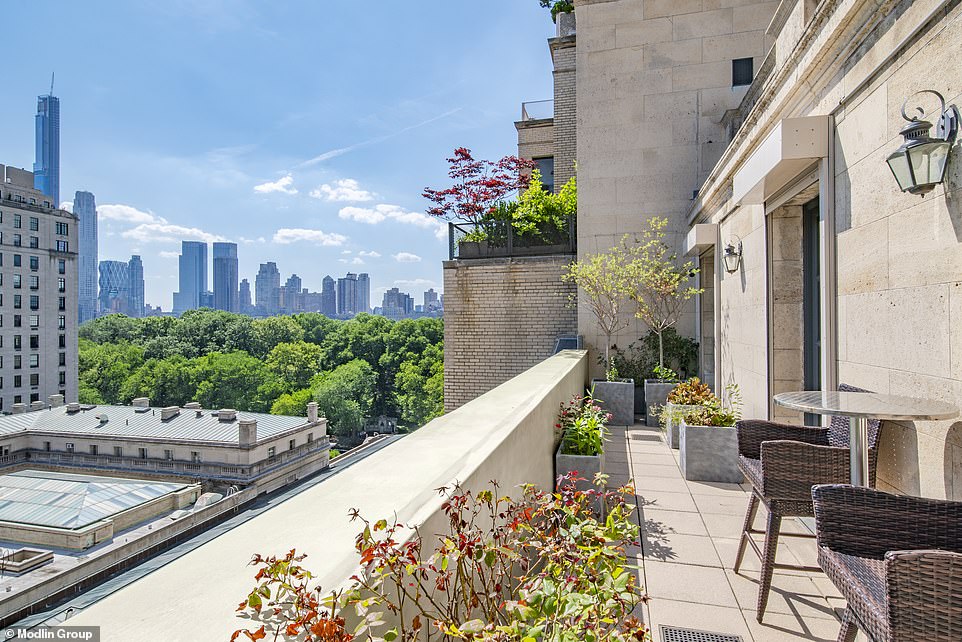 Its impressive exterior facade – made of imported French limestone – is decorated with ornate carvings and picturesque balconies (Image shared by Modlin Group, who are representing the property) 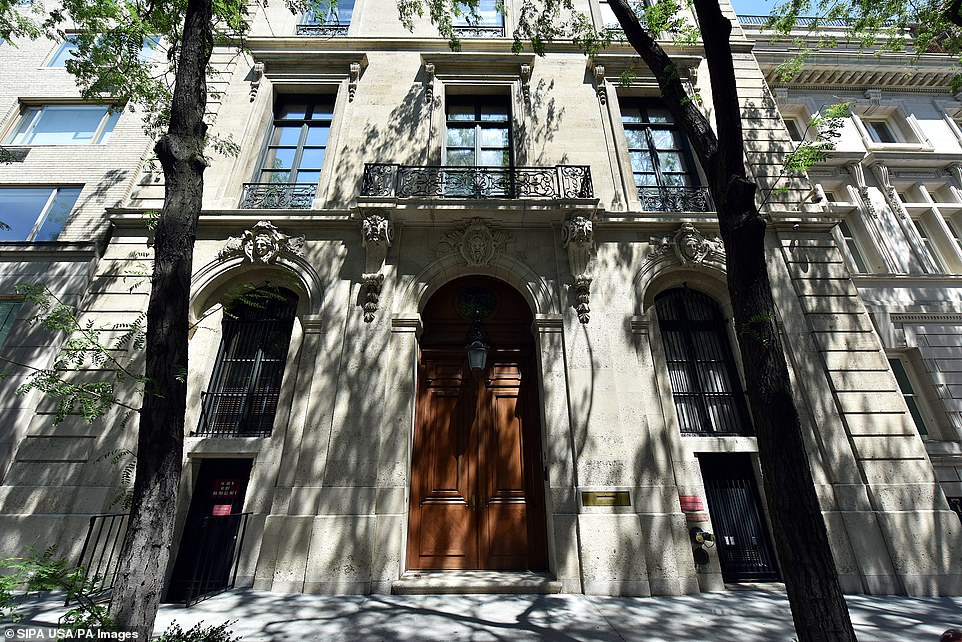 In recent years , the property has gained infamy as a house of horrors, where, for years, Epstein reportedly sexually abused dozens of underage girls 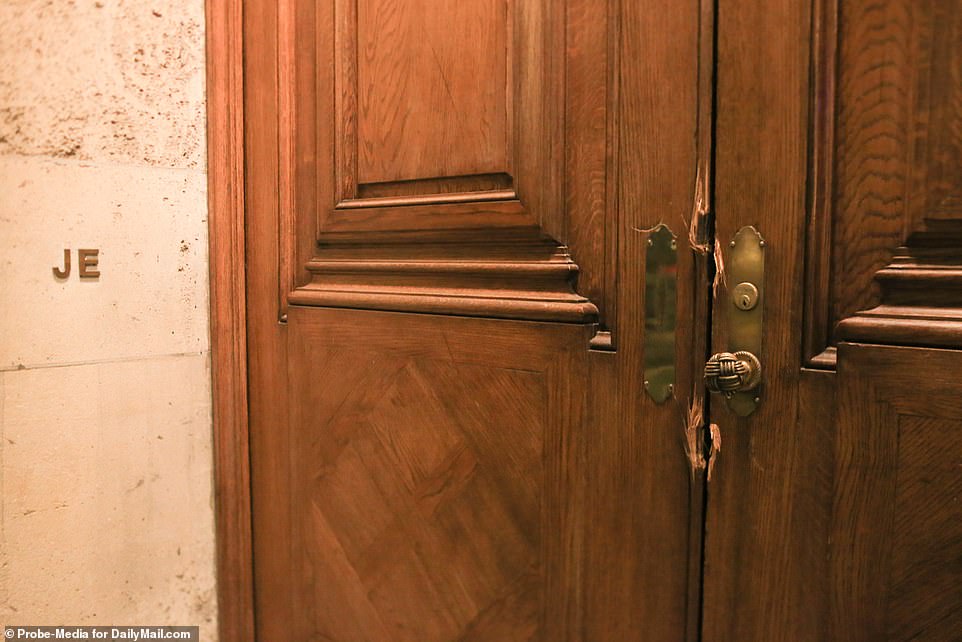 The home has an imposing 15-foot front door, which once featured the letters ‘J.E’ in raised brass (seen above after the July 2019 raid)

Built in the early 1930s, the home was originally commissioned by Herbery N. Straus, an heir to the Macy’s department store fortune, whose father had perished on the Titanic 18 years earlier.

More recently it was owned by Leslie Wexner, chairman of L Brands, which owns retailers including Victoria’s Secret, who was also a mentor of Epstein’s.

Epstein reportedly purchased the home from Wexner back in 1998 for $20 million – just under $7 million more than Wexner had bought it for in 1989.

In the years since, the property has gained infamy as a house of horrors, where, for years, Epstein reportedly sexually abused dozens of underage girls.

The shamed financier reportedly had hundreds of pinhole surveillance cameras installed throughout the home so he could monitor his victim’s ‘private moments’ in bedrooms and bathrooms. He allegedly had a media room behind a hidden door where he kept stacks of TVs playing the surveillance feeds. 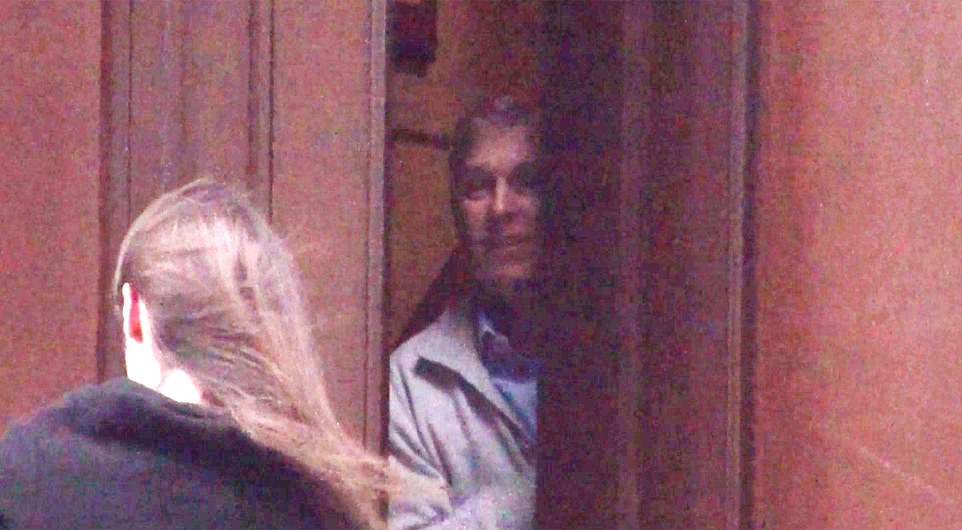 Esteemed guests who’ve stayed at the home include Prince Andrew, who is shown in the above image peering around the front door in December 2010 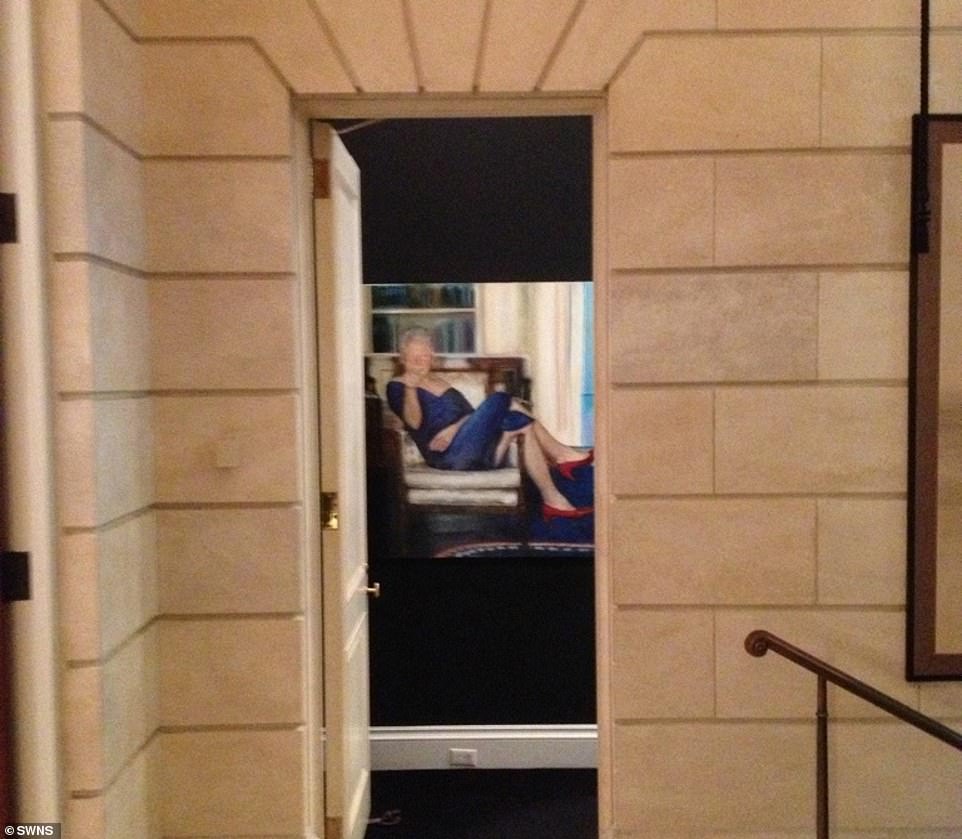 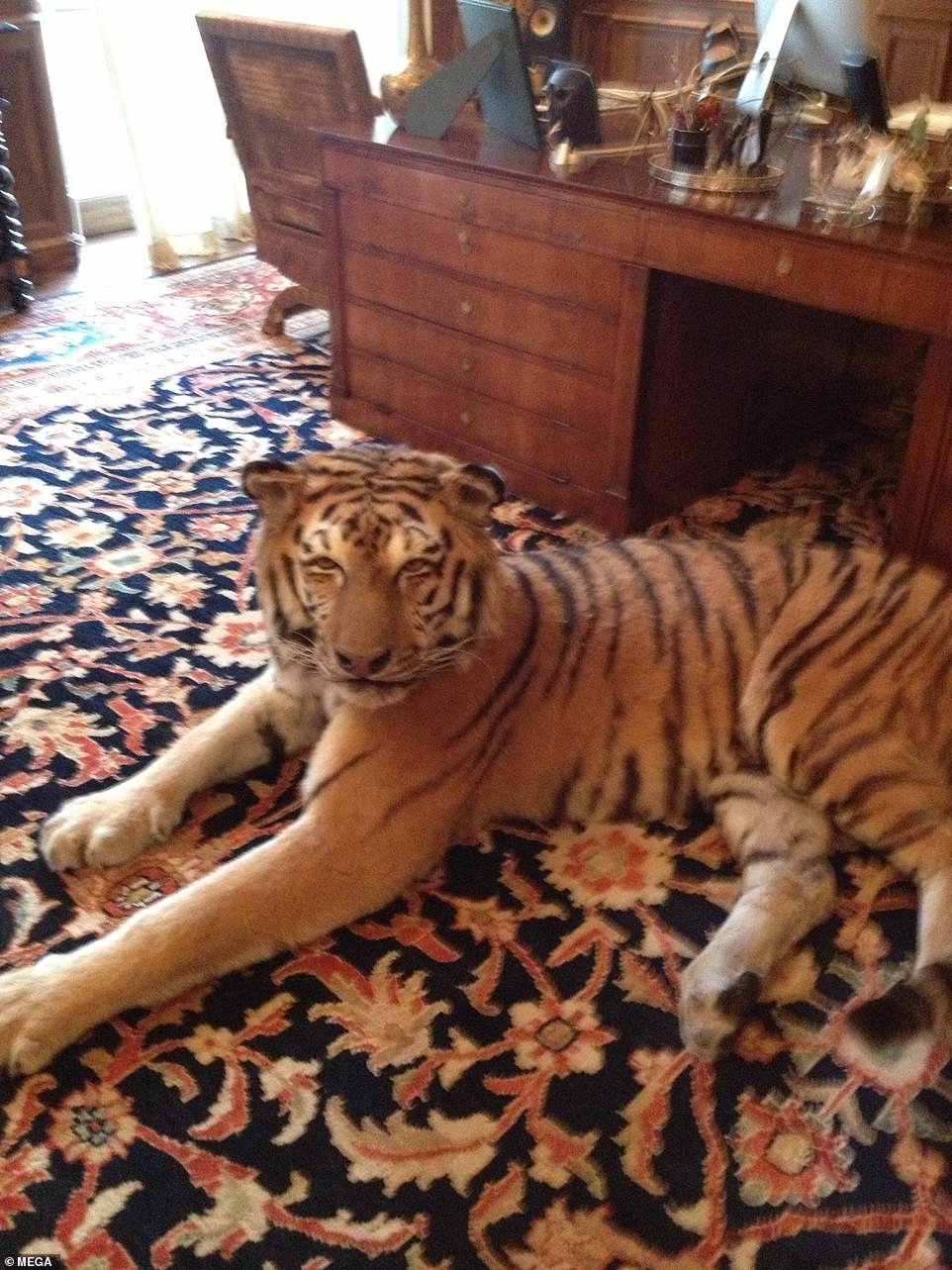 The home also featured an array of bizarre decor, including a large taxidermy tiger that was placed in an office 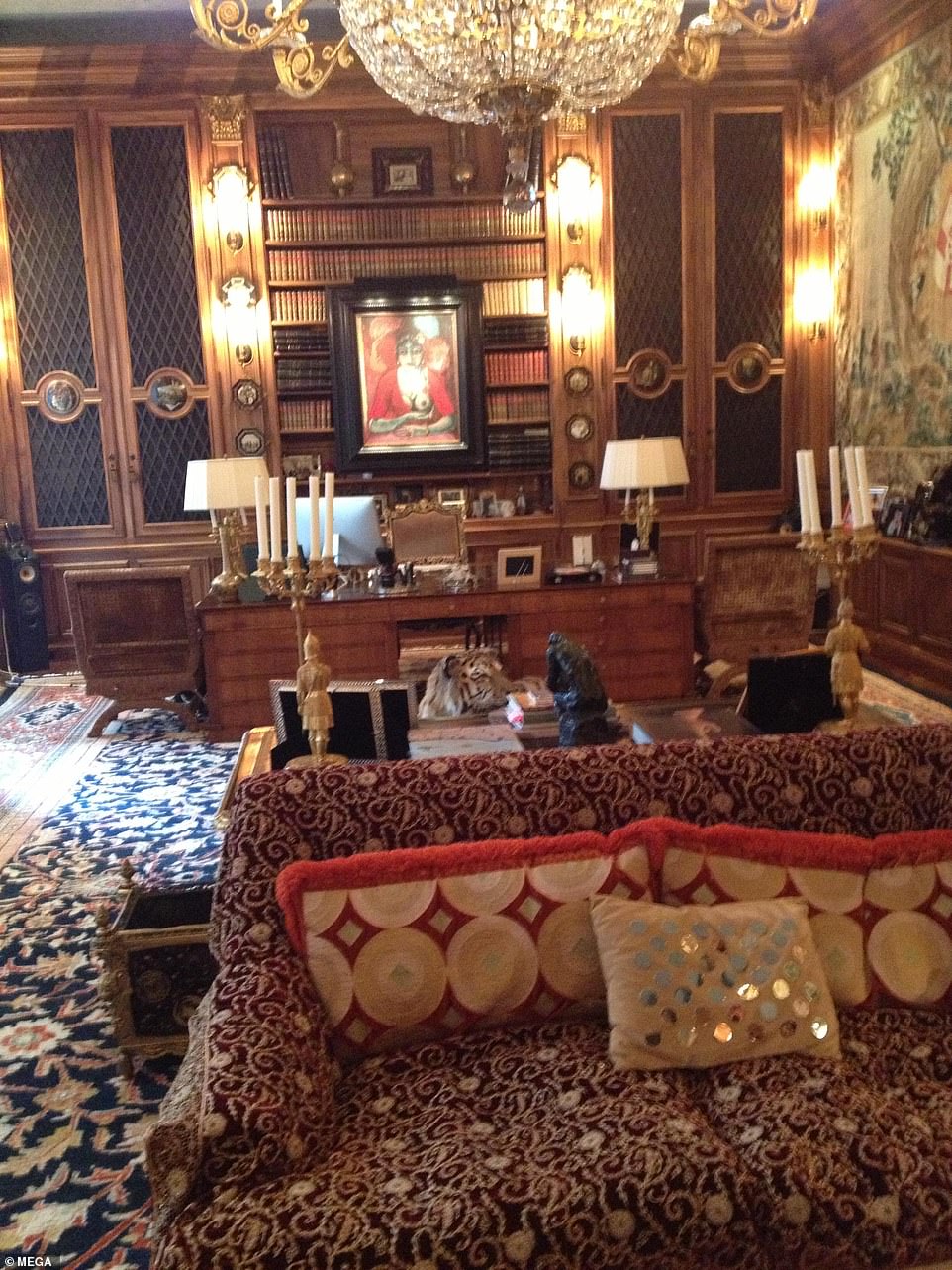 Near to the tiger, a strange painting showing a woman with an exposed breast hung on a bookshelf above a desk 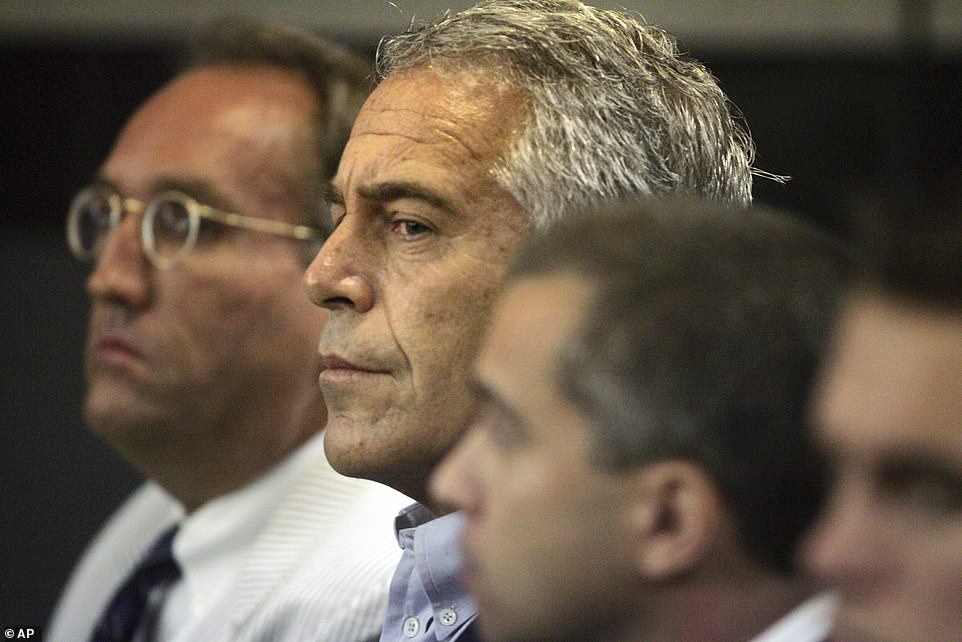 Epstein died in a New York jail in August 2019, while awaiting trial on sex trafficking charges. The death was ruled a suicide

When his home was raided in July 2019 as part of a sex trafficking sting, authorities reportedly found lurid images of young girls locked in a safe. They also found ‘piles of cash’, diamonds and an expired foreign passport listing Epstein’s residence as Saudi Arabia.

Epstein died in a New York jail in August 2019 aged 66, while awaiting trial on sex trafficking charges. The death was ruled a suicide.

Most of his belongings were removed from the home following his death, though people who have viewed the listing previously claimed that some of his relics – mainly furniture – remain.

He was believed to have at one time hung a bizarre oil painting of Bill Clinton wearing a blue dress on one of his walls. Other quirks inside the mansion included a huge taxidermy tiger and a stuffed poodle.

Esteemed guests at the home include Prince Andrew, who was pictured in December 2010 peering around the front door, as he reportedly waived goodbye to a brunette female he’d led out.

The reason behind the home’s dramatic price cut is not yet known. However, the New York real-estate market has reportedly been hard hit by the pandemic, with townhouse sales down 50 percent on 2019.

Where luxury townhouses are considered, there has been just 22 sales over $10 million in the first three quarters of 2020, compared to 64 during the same times frame last year, according to WSJ. 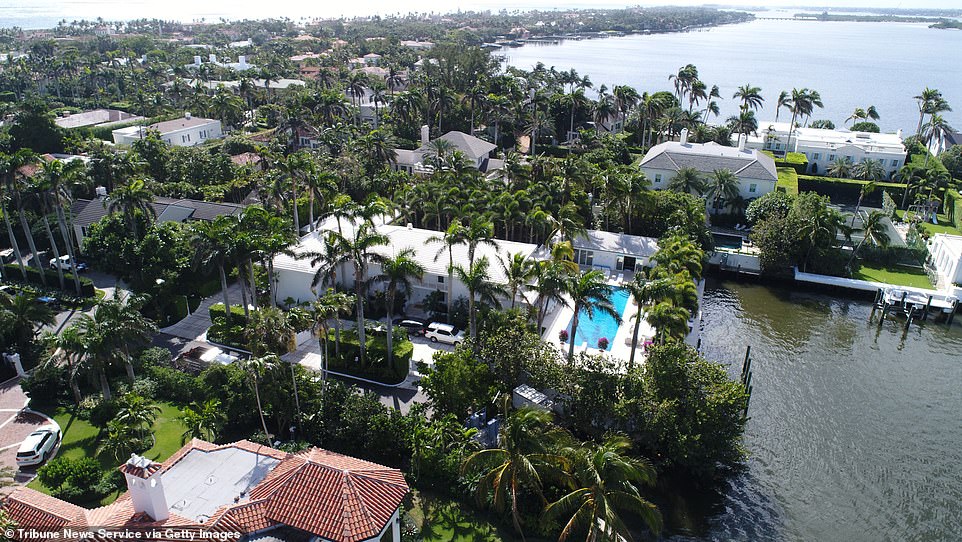 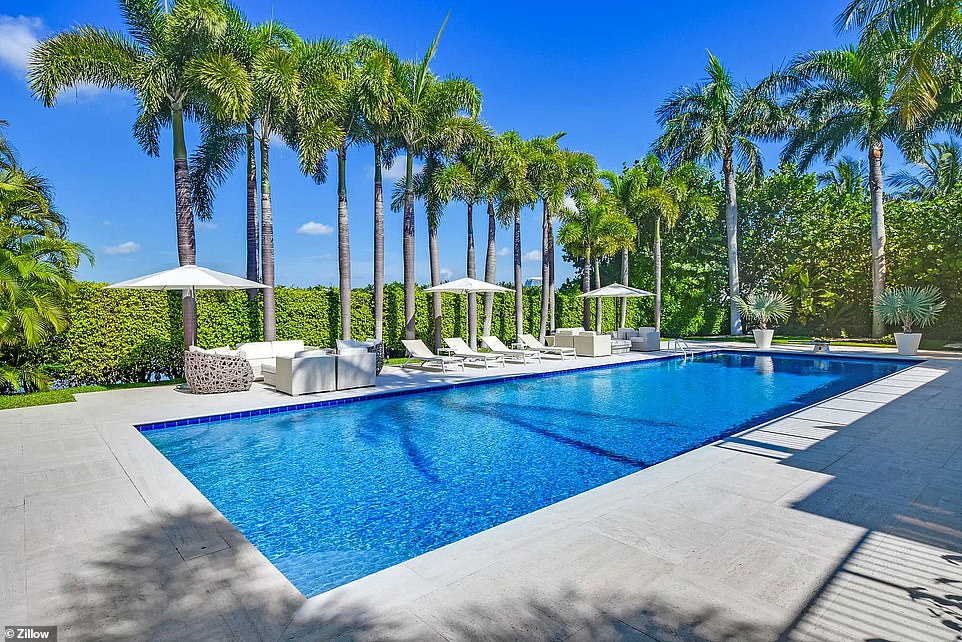 However, that home was sold in November to spec home developer Todd Michael Glaser who says he intends to replace the existing home with a 14,000-square-foot Art Moderne mansion

Epstein owned multiple luxury properties around the world, including an island dubbed Little St. James, in the U.S. Virgin Islands, which was known to locals as ‘Pedophile Island.’ A month before Epstein’s death, he estimated his properties were collectively valued at over $180 million.

However, that home was sold in November to spec home developer Todd Michael Glaser, who says he intends to replace the existing home with a 14,000-square-foot Art Moderne mansion.

Sale proceeds from the Epstein estate will go towards a compensation fund for the dozens of alleged victims who have filed civil suits in the wake of his death.

1999-2002 – Virginia Roberts [Jane Doe #3] claims to she served as a ‘sex slave’ for Jeffrey Epstein and was required to engage in sexual activity with him and a number of his high-profile friends.

March 2005 – Authorities in Florida launch a probe into Epstein after a mother calls and alleges that her daughter was molested at his Palm Beach estate.

May 2006 – A probable cause affidavit is filed by the Palm Beach Police Department after the sexual battery investigation into Epstein, Sarah Kellen and Haley Robson Sworn. It charges Epstein with four counts of lewd and lascivious behavior for unlawful sex with a minor. Five victims and seventeen witnesses were interviewed, and alleged that Epstein engaged in unlawful sexual behavior. Sworn meanwhile was accused of profiting by providing young girls to Epstein, while Kellen was tasked with keeping a black book containing the names and contact information of these minors in her capacity as Epstein’s assistant.

May 2006 – Barry Krischer, the State Attorney in Palm Beach, refers the case to a grand jury.

June 2006 –  The grand jury returns an indictment of one count of solicitation of prostitution. This charge does not reflect that the individual in question was a minor. Only one girl testifies in front of the grand jury.

July 2006 – The Palm Beach Police Chief grows increasingly annoyed as he watches the lack of progress his investigation is making in the legal system, and convinces the FBI to open a federal investigation. It is dubbed Operation Leap Year and the possible crime being probed is ‘child prostitution.’

June 2007 – The US Attorney’s Office drafts a lengthy indictment as the federal probe  of Epstein comes to an end, while at the same time Epstein begins negotiating a possible plea deal.

July 2007 – A new set of grand jury subpoenas are issued, including ones for Epstein’s computers. When police go to execute those subpoenas at Epstein’s Palm Beach home, they discover they have all been removed.

August 2007 – The US Attorney in Miami at the time, Alex Acosta, joins the Epstein negotiation talks.

October 2007 –  Acosta meets with Epstein’s lawyer Jay Lefkowitz to finalize the terms of the plea deal. It is agreed that the victims would not be notified,  the deal would be kept under seal and all grand jury subpoenas would be canceled – including the one for Epstein’s computers, which were still at large.

January 2008 – After months of demands, Epstein and his lawyers say they will not longer accept the plea deal because he forces him to register as a sex offender.

February 2008 – A civil lawsuit is filed against Epstein by an anonymous woman, stating that as a 16-year-old minor she was recruited to give Epstein a paid massage. She demands $50 million, claiming that she was then force to perform sex acts on Epstein.

March 2008 – A federal grand jury presentation is planned following the FBI probe. Lawyers for Epstein begin harassing victims with phone calls and one of his investigators is accused of trying to run a victim’s father off the road.

March 2008 – A second woman files a civil action against Epstein.

May 2008 – It is announced that with no plea deal in case, the federal case against Epstein can proceed.

July 2008 – Epstein’s victims learn of the plea deal, but it will be another 10 years before they are informed of all the details, including the fact that victim was 16 in the charge to which Epstein entered a guilty plea and not 14 like the women were led to believe. This allowed Epstein to avoid registering as a sex offender in multiple states like New Mexico, where he has a ranch. An emergency petition is filed udner the Crime Victims’ Rights Act, which mandates that victims be informed about plea agreements and the right to appear at sentencing. It is ignored.

August 2008 – Epstein’s agreement cannot be unsealed for the victims to see it is ruled in court, with federal prosecutors fighting to keep the records hidden from the public.

October 2008 – Epstein begins work release from the county stockad, where  six days a week an he is transported to an office where he is able to work and entertain visitors. He returns to the stockade in the evening.

December 2008 – A judge grants Epstein’s request to travel to New York for a day and then an extended stay. He says it is for a court case, but after an initial filing there is no follow-up in the case.