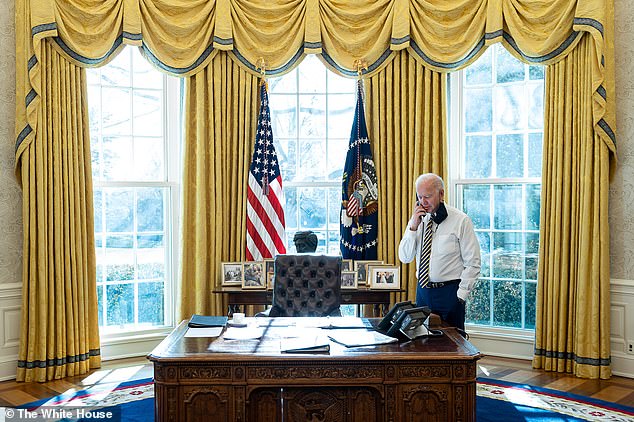 President Joe Biden plans to call the king of Saudi Arabia on Wednesday, ahead of the public release of an intelligence report on the murder of journalist Jamal Khashoggi.

The report from the Office of the Director of National Intelligence – which could come out as soon as Thursday – is expected to be damaging to Saudi Arabia and imply Saudi Crown Prince Mohammed bin Salman was involved in the murder.

Axios reported on the call, which, if it happens as scheduled, would be the first conversation between Biden as president and Saudi King Salman bin Abdulaziz.

The 85-year-old king is the head of government but the crown prince, his heir, is seen as the power behind the throne.

Bin Salman has denied involvement in the October 2018 murder of Khashoggi, a Saudi dissident who wrote columns critical of MBS, as the crown prince as known. MBS did accept responsibility for the assassination as the de facto ruler of Saudi Arabia.

The call is expected to cover a range of topics. And it comes after the White House last week announced a recalibration of American relations with Saudi Arabia.

‘We’ve made clear from the beginning that we’re going to recalibrate our relationship with Saudi Arabia,’ White House press secretary Jen Psaki said.

She said part of that recalibration would include Biden speaking to the Saudi king, instead of MBS – a marked change in policy from the Trump administration.

‘Part of that is going back to engagement counterpart to counterpart, the president’s counterpart is King Salman and I expect that, at an appropriate time, he would have a conversation with him,’ Psaki said.

Khashoggi fled Saudi Arabia in September 2017 to live in self-imposed exile. He was writing columns critical of the Saudi government – including of both King Salman and MBS – for The Washington Post.

In October 2018, Khashoggi visited the Saudi Consulate in Istanbul, to pick up the paperwork required for his marriage to a Turkish citizen. He was never seen leaving.

According to reports, while there he was drugged, killed and dismembered by a team of assassins sent in from Saudi Arabia.

Trump’s son-in-law and senior adviser Jared Kushner was close to MBS, who became next in line to the throne in June 2017 after a power struggle ousted a rival.

Kushner’s close relationship with him – the two were said to text and communicate via apps – raised eyebrows due to its taking place outside of diplomatic channels, Kushner’s lack of foreign policy experience and MBS’ reputation as a despot.

The crown prince has been accused of the torture of human rights activists; the Saudi bombing campaign in Yemen which has exacerbated the humanitarian crisis and famine; and the arrest of members of the Saudi royal family in November 2017 where he imprisoned several of his royal cousins in a Ritz-Carlton hotel in Riyad.

In Bob Woodward’s book ‘Fear,’ the veteran Washington Post journalist wrote that Trump had said, ‘I saved his a**,’ about MBS.

Trump saw the relationship with Saudi Arabia in dollar figures, warning lawmakers that the Saudis could go into business with Russia instead. In May 2019, Trump also bypassed Congress allowing the Saudis to buy $8 billion in arms.

Woodward asked if Trump believed that he ordered Khashoggi’s killing.

Trump also ignored a law passed in early 2019 that instructed his administration to give Congress an unclassified intelligence report with ‘a determination and evidence with respect to the advance knowledge and role of any current or former official of Saudi Arabia … over the directing, ordering or tampering of evidence in the killing of Washington Post columnist Jamal Khashoggi.’

In February of last year the Office of the Director of National Intelligence told congressional leaders it was ‘unable to provide additional information … at an unclassified level,’ instead sending them a copy of the classified CIA report.

In July, Director of National Intelligence John Ratcliffe reiterated to lawmakers that he would not be releasing an unclassified report because ‘the disclosure of additional details surrounding Mr. Khashoggi’s murder would undermine U.S. intelligence sources and methods.’

He also said, ‘I have determined that there is only a marginal ‘public interest’ argument for this declassification.’

But the Biden administration vowed to release the document.

During her confirmation, Biden’s nominee to head the DNI, Avril Haines, said it would happen.

‘Yes, senator. Actually, we’ll follow the law,’ she said when asked about the report’s release.

Tunisian Presidency: The Emir of Qatar responded to Saeed’s call regarding the execution of a Tunisian citizen

World's End Club: Here's What Comes in Each Edition

World's End Club: Here's What Comes in Each Edition