Just 20 firms produce 55 per cent of ‘throwaway’ single-use plastic that ends up as waste worldwide, a new report reveals.

These three companies together account for 16 per cent of global single-use plastic waste, according to the newly-published Plastic Waste Makers index.

At 44 kg, the UK is also the fourth largest producer of single-use plastic waste by per capita globally, the report found. 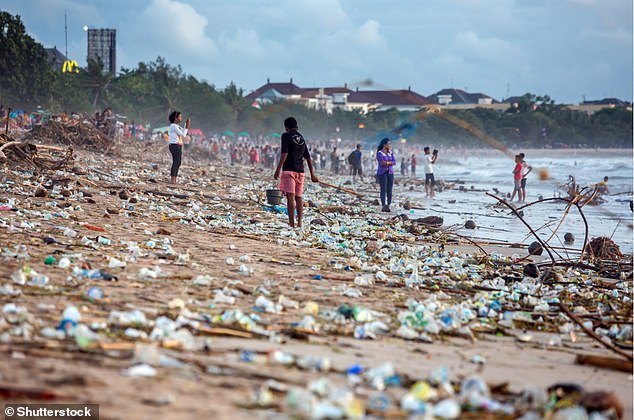 Close to 60 per cent of the commercial finance funding single-use plastic production comes from just 20 global banks, it reveals.

A total of $30 billion (£21 billion) of loans from these institutions – including Barclays, HSBC, Bank of America, Citigroup and JPMorgan Chase – has gone to the sector since 2011.

– In 2019, 20 polymer producers accounted for 55 per cent of all single-use plastic waste generated globally – and the top 100 accounted for 90 per cent.

– The biggest producer ExxonMobil alone is responsible for 5.9 tonnes of single use plastic waste (that’s equivalent to the weight of 5,700 blue whales).

In all, 20 asset managers – led by US companies Vanguard Group, BlackRock and Capital Group – hold more than $300 billion worth of shares in the parent companies of single-use plastic polymer producers.

Of this, $10 billion (£7 billion) is directly linked to single-use polymer production, the index reveals.

The index has been authored by Minderoo Foundation, along with experts from the London School of Economics and Stockholm Environment Institute.

The authors predict a 30 per cent increase in global throwaway plastic production over the next five years.

This growth in production will lead to an extra three trillion items of throwaway plastic waste by 2025 alone, they believe.

‘Of approximately 300 polymer producers operating globally, a small fraction hold the fate of the world’s plastic crisis in their hands,’ the report says.

‘Their choice, to continue to produce virgin polymers rather than recycled polymers, will have massive repercussions on how much waste is collected, managed and leaks into the environment.’

While the index reveals figures for 2019, the global economic downturn caused by the coronavirus pandemic since early 2020 has pushed down the price of oil, the report points out.

This has made fossil fuel based single-use plastics even more financially attractive, likely making the plastic waste crisis a lot worse. 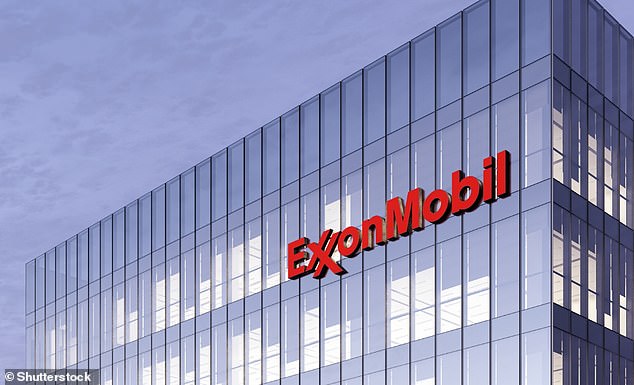 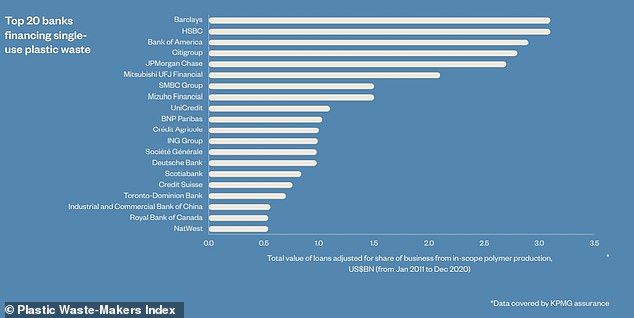 Close to 60 per cent of the commercial finance funding single-use production, comes from just 20 global banks. A total of $30 billion of loans from these institutions – including Barclays, HSBC and Bank of America among others – has gone to the sector since 2011

Plastic waste soared during lockdown as British households threw away 25 per cent more food packaging, parcel bags and PPE, a survey has revealed.

The ‘Everyday Plastic Survey’ saw some 483 people across the UK record the extent of their household’s plastic waste for a week during lockdown.

The households got through 128 pieces of plastic waste per week on average — an increase from the 99-piece-average from similar surveys pre-Covid.

In total, the 179 homes accumulated nearly 23,000 bits of plastic rubbish — much of which would be destined for landfill or incineration, rather than recycling.

Food and drink products accounted for 68 percent of the waste, the survey revealed.

In terms of per capita consumption, Australia and the US generate the most single-use plastic waste – at more than 50 kg per person per year.

Both countries are followed by South Korea, the UK and Japan.

Made almost exclusively from fossil fuels, single-use plastics, such as plastic bags, are the most commonly discarded type of plastic.

More than 130 million metric tonnes of single-use plastic ended-up as waste in 2019 – almost all of which is burned, buried in landfill, or discarded directly into the environment.

Of this total, 19 per cent – around 25 million metric tonnes – became pollution, dumped in oceans or on land, which is equivalent to the weight of over 23,000 blue whales.

‘The plastification of our oceans and the warming of our planet are amongst the greatest threats humanity and nature have ever confronted,’ said Dr Andrew Forrest AO, chairman and co-founder, Minderoo Foundation.

‘Global efforts will not be enough to reverse this crisis unless government, business and financial leaders act in our children’s and grandchildren’s interests.

‘This means stop making new plastic and start using recycled plastic waste. It means re-allocate capital from virgin producers to those using recycled materials, And importantly, it means redesign plastic so it does no harm and is compostable, so like every other element, it returns to its original molecules, not nano-plastics.

‘And we must act now. Because while we bicker, the oceans are getting trashed with plastic and the environment is getting destroyed by global warming.’ 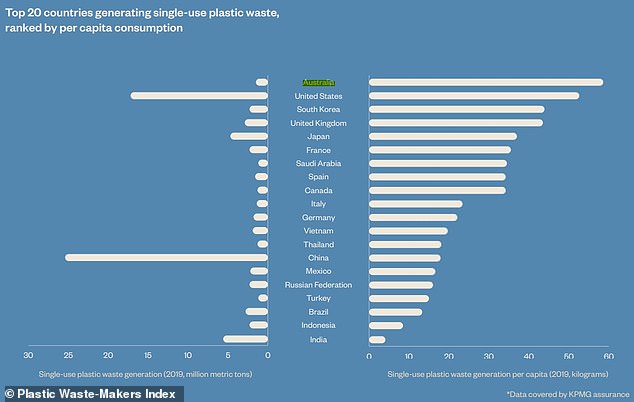 Left, rankings for single-use plastic waste generation by country in million metric tons (MMT). This contrasts with the rankings for per capita consumption, right (which is topped by Australia and the US) measured in kilograms 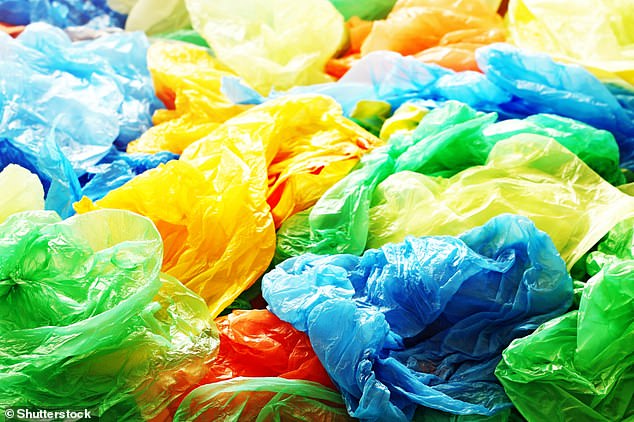 Made almost exclusively from fossil fuels, single-use plastics are the most commonly discarded type of plastic

Researchers said this is the first-time the financial and material flows of single-use plastic production have been mapped globally and traced back to their source – which is revealed as predominantly petrochemical companies.

Environmental campaigners have previously placed the blame for plastic waste at the feet of packaged goods brands such as PepsiCo and Coca-Cola.

‘Revealing the sheer scale of the global crisis we have on our hands, its critical we break the pattern of inaction,’ said Toby Gardner, senior research fellow at Stockholm Environment Institute.

‘You can’t manage what you can’t measure. Building on the analysis published today, this is why it is so important the small group of companies and banks that dominate global production of throwaway plastics begin to disclose their own data.’

Minderoo Foundation is calling for petrochemicals companies to be required to disclose their ‘plastic waste footprint’ and commit to transitioning away from fossil fuels towards circular models of plastic production.

Of 30 billion plastic bottles used by UK households each year, only 57 per cent are currently recycled.

With half of these going to landfill, half of all plastic bottles that are recycled go to waste.

This is largely due to plastic wrapping around bottles that are non-recyclable.

Bottles are a major contributor to the increasing amount of plastic waste in the world’s oceans.

Researchers warned eight million tonnes of plastics currently find their way into the ocean every year – the equivalent of one truckload every minute.

The amount of plastic rubbish in the world’s oceans will outweigh fish by 2050 unless the world takes drastic action to further recycle, a report released in 2016 revealed.

At current rates, this will worsen to four truckloads per minute in 2050 and outstrip native life to become the largest mass inhabiting the oceans.

An overwhelming 95 per cent of plastic packaging – worth £65 – £92billion – is lost to the economy after a single use, the Ellen MacArthur Foundation report stated.

And available research estimates that there are more than 150 million tonnes of plastics in the ocean today.

Plastic pollution is ruining the ecosystems of the world, both marine and terrestrial. It litters shorelines, snags animals and suffocates entire populations of animals

So much plastic is dumped into the sea each year that it would fill five carrier bags for every foot of coastline on the planet, scientists have warned.

More than half of the plastic waste that flows into the oceans comes from just five countries: China, Indonesia, Philippines, Vietnam and Sri Lanka.

The only industrialized western country on the list of top 20 plastic polluters is the United States at No. 20.

The US and Europe are not mismanaging their collected waste, so the plastic trash coming from those countries is due to litter, researchers said.

While China is responsible for 2.4 million tons of plastic that makes its way into the ocean, nearly 28 percent of the world total, the United States contributes just 77,000 tons, which is less than one percent, according to the study published in the journal Science.

Russia seeks to ban Navalny supporters from running in elections

How to prioritize mental health resources in the workplace: Ask HR

Adviser to the King of Bahrain attacks Qatar

Opinion: For Danny Ainge, Brad Stevens and the Celtics, it was just time to move on

Raymond Wilson, 31, was arrested for housebreaking and molesting a younger lady whereas she was sleeping...