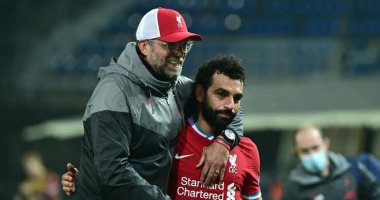 The German Jurgen Klopp, technical director of the Liverpool team, stated that the renewal of the contract of the Egyptian star, Mohamed Salah, is not in his hands, as he is far from the competence of his work. He’s fit and committed and he’s perfect. He looks very good and there’s nothing more to say.”

Liverpool technical director Jurgen Klopp spoke about the Crystal Palace match scheduled for tomorrow, Saturday, in the fifth round of the English Premier League competitions.

“Play every three days? It’s normal to play three games in one week. Playing on Sunday, then Wednesday and Saturday is difficult so we have to think about that,” Klopp said at the match press conference.“.

The Liverpool coach added: “Crystal Palace is playing well this season, but we have to do it too and I hope we can do it, it is a very good football team. Vieira has signed new players and has used them well. They have a very good offensive line, Edward entered the last game and scored two goals, There’s Io, Benteke and Zaha, that’s offensive quality“.

The Liverpool technical director indicated: “Firmino has not started training with the group yet, we expect him to return next week and we will see.”

Klopp continued: “Origi’s decisive pass for Salah’s goal was a very important moment. He had some cramps and we’ll see what he will be like tomorrow, but frankly he looked very good against Milan, Origi’s performance against Milan was exceptional. Now we play a lot of games and he was with us during the international break, so He had more opportunity to train and we saw what he did so I decided to start against Milan“.

Klopp spoke about Sadio Mane, saying: “He is an exceptional player so he has to present levels that fit his name and this is what we expect from him. Mane will reach 100 goals and it would be nice if he could do it tomorrow and score, he looks very good and very ready. The number of chances he gets is very important and he Having a good time mentally and physically“.

Klopp stressed: “We made a good start and if you want to be at the top, you shouldn’t waste points, we keep progressing and I am not surprised by the results of other teams.”“.