Jaguar Land Rover is stepping on the gas with a new hydrogen-fuelled electric 4X4, the British car maker has announced this morning.

The zero-emissions prototype Defender uses the hydrogen in a fuel-cell chemical reaction to generate electricity which then powers electric motors to drive the wheels of the off-roader.

The only bi-product from the exhaust is water so pure you can drink it.

The project confirms that the British marque looks set to follow rival 4X4 maker Ineos Automotive, which has said its ‘green’ version of the forthcoming Grenadier offroader will be hydrogen electric rather than using heavy battery packs. 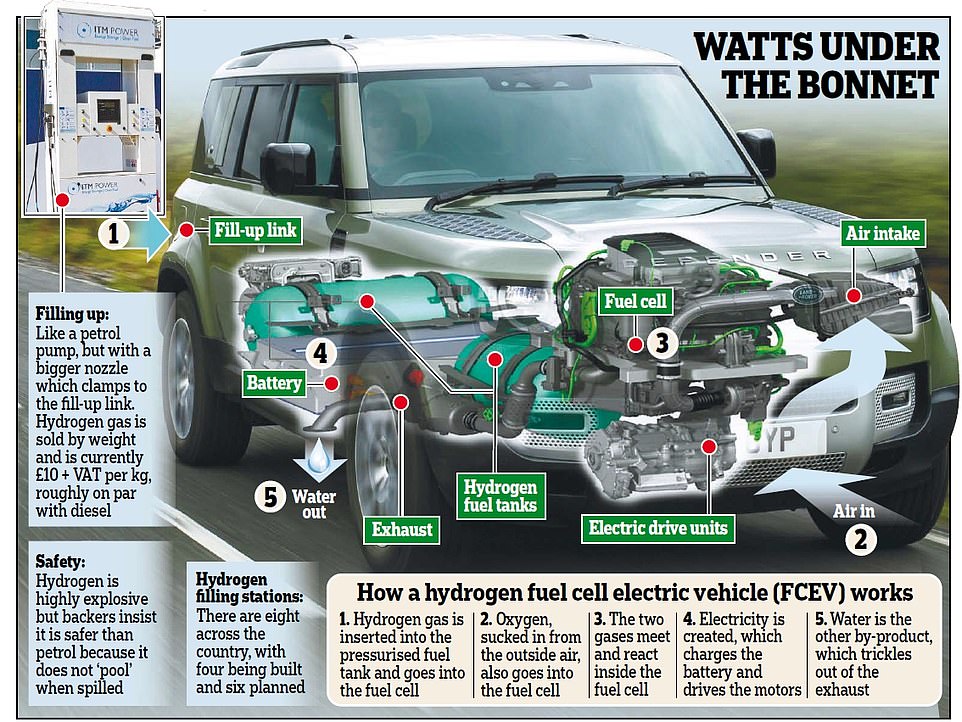 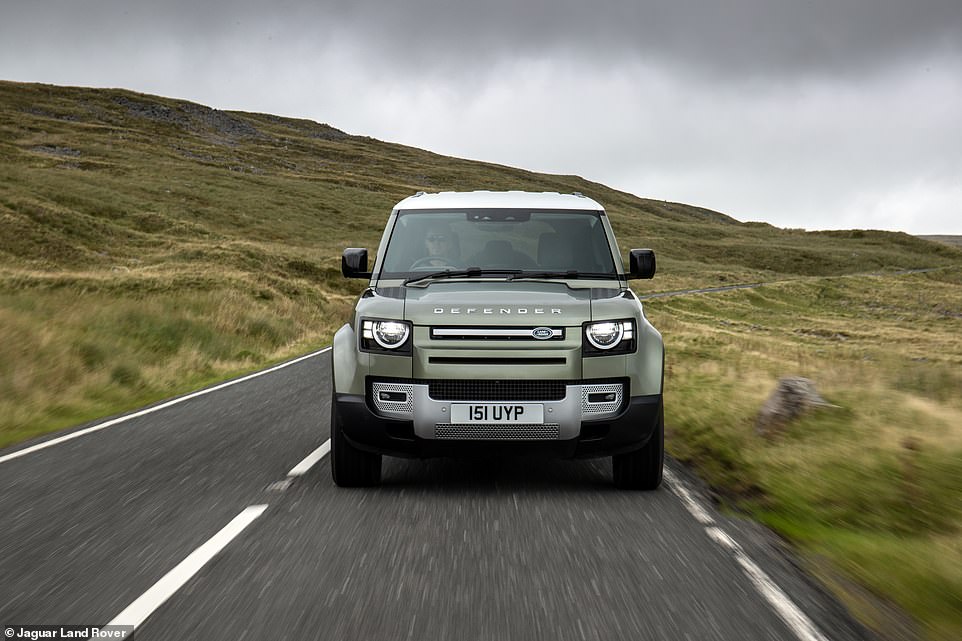 H2Offroader: Jaguar Land Rover has confirmed it is testing an electric Defender 4X4 with a hydrogen fuel cell powertrain. The vehicle emits only water

Codenamed ‘Project Zeus’ – after the ruling god of thunder and lightning – JLR aims to disarm critics who condemn large 4X4s and SUVs for being ‘gas guzzlers’ by creating a green vehicle off-road vehicle that really does guzzle gas – but in the cleanest possible way with no harmful environmental side effects.

Testing begins later this year with production models of fuel cell Land Rover Defender, Discovery and Range Rover potentially on the road within the decade.

The new fuel-cell electric prototype is part of Jaguar Land Rover’s aim to achieve zero tailpipe emissions by 2036, and net zero carbon emissions across its suppliers, products and operations by 2039.

It follows the government’s controversial plans to ban petrol and diesel cars – in which JLR had invested heavily to produce cleaner and leaner versions – by 2030.

A production model could be on sale within five years, given the rapid acceleration of electrified technology.

No official performance figures are available as the prototype is not yet fully tested, however electric vehicles usually accelerate faster than their petrol and diesel counterparts, so expect 0-to-60mph in under 6 seconds up to a top speed of around 120mph.

Similarly, hydrogen fuel tanks – even when used to generate on board electricity- generally offer a much longer range than electric vehicles which rely solely on a rechargeable battery, so expect a range of around 400 miles or more.

The advantage of using fuel cell technology is that the vehicle will not need to carry the excessive weight of lithium-ion batteries used to power more conventional EVs.

This is especially advantageous for burly 4X4s, that are already heavy enough.

Additional battery bulk could limit an off-roaders capability away from the tarmac, potentially bogging down under the vehicle’s own mass.

Last November billionaire British tycoon Sir Jim Ratcliffe signed a landmark deal with Korean car giant Hyundai to produce green zero-emissions versions of his forthcoming new Grenadier 4X4 – a version of which will run off hydrogen-powered electricity. The off-roader is being built at a former Mercedes-Benz Smart factory in Hambach, France, close to the German border, after plans to build it at Bridgend in Wales were controversially dropped, though production has since been delayed.

Other hydrogen fuel-cell cars include Toyota’s Mirai (with a sleek new second-generation version launched this year), the new Hyundai Nexo and Honda’s Clarity.

British-start up Riversimple uses hydrogen power which is also being explored by BMW and Daimler. Some commercial vehicles including buses, council van fleets, and police cars use fuel

JLR’s Project Zeus is part funded by the pioneering and government-backed Advanced Propulsion Centre based at Warwick University. 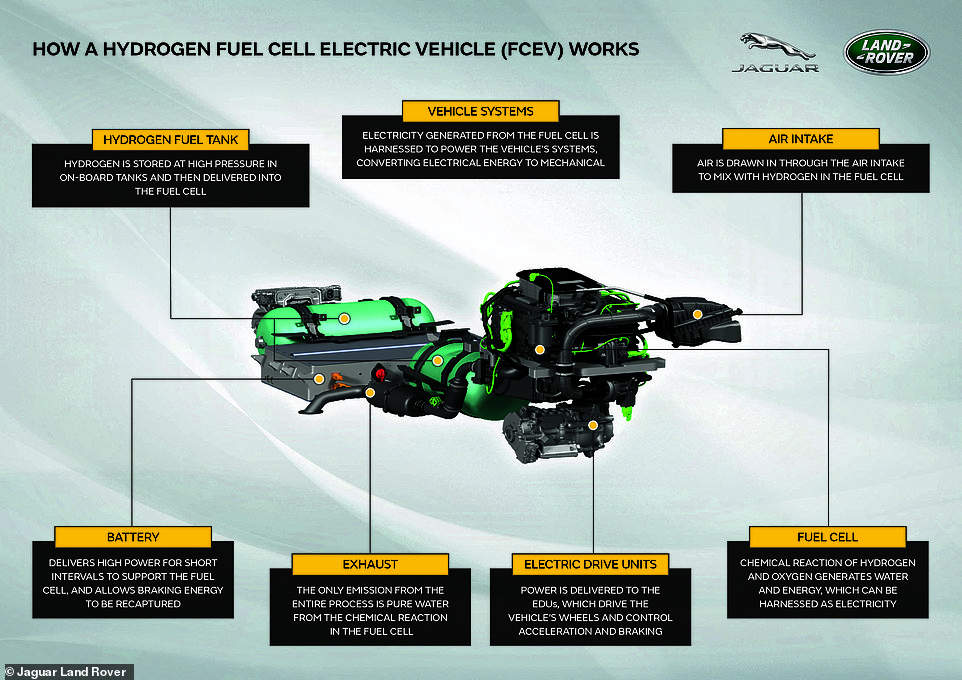 How will a hydrogen fuel cell Land Rover work?

The prototype uses a special fuel-cell which acts as a mini on-board power-station taking the hydrogen gas and, through a chemical reaction, creating electric power from the fusion of hydrogen from the fuel tank and oxygen atoms sucked in from the atmosphere.

The other by-product – as you may recall from school-days’ chemistry lessons, is H20 – otherwise known as water – dribbles out of the exhaust pipe and is so pure you can drink it. It’s a form of reverse electrolysis.

Experts say the hydrogen option is particularly suited to larger vehicles, including commercial vehicles, which is why many local councils and some firms are adding hydrogen powered truck and buses to their fleets. Land Rover produces a popular commercial version of its Defender called Hard Top. 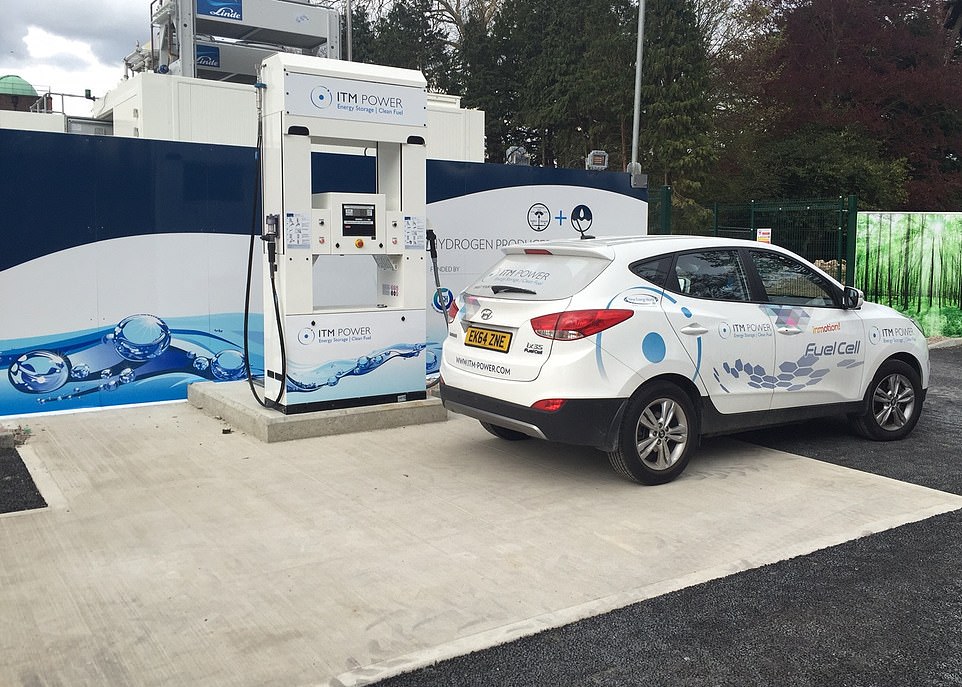 Re-fuelling is likely to be an issue to begin with, though.

The number of hydrogen filling stations is increasing, but they are still a relative rarity.

UK firm ITM Power is already creating a national network of hydrogen filling stations with those established already including Teddington, South West London, Cobham off the M25 in Surrey, Beaconsfield off the M40, Sheffield, Swindon, Slough, Gatwick, Birmingham, and Aberdeen.

Filling up is similar to using similar a petrol pump – it’s just much bigger.

You manoeuvre a super-sized nozzle which clamps itself onto the fill-up link, and the pump injects the hydrogen at high speed and under pressure into the tank. It’s like filling up your car with four-star but, say the experts, arguably safer. For despite fears about lighter than air but highly explosive hydrogen – which created lift for the ill-fated Hindenburg airship which exploded in flames – backers insist it is safer than petrol as it does not ‘pool’ when spilt.

The company announced today: ‘Jaguar Land Rover is developing a prototype hydrogen fuel cell electric vehicle based on the new Land Rover Defender, with testing scheduled to begin this year.

It went on to explain: ‘Hydrogen-powered fuel-cell electric vehicles provide high energy density and rapid refuelling, and minimal loss of range in low temperatures, making the technology ideal for larger, longer-range vehicles, or those operated in hot or cold environments.’ 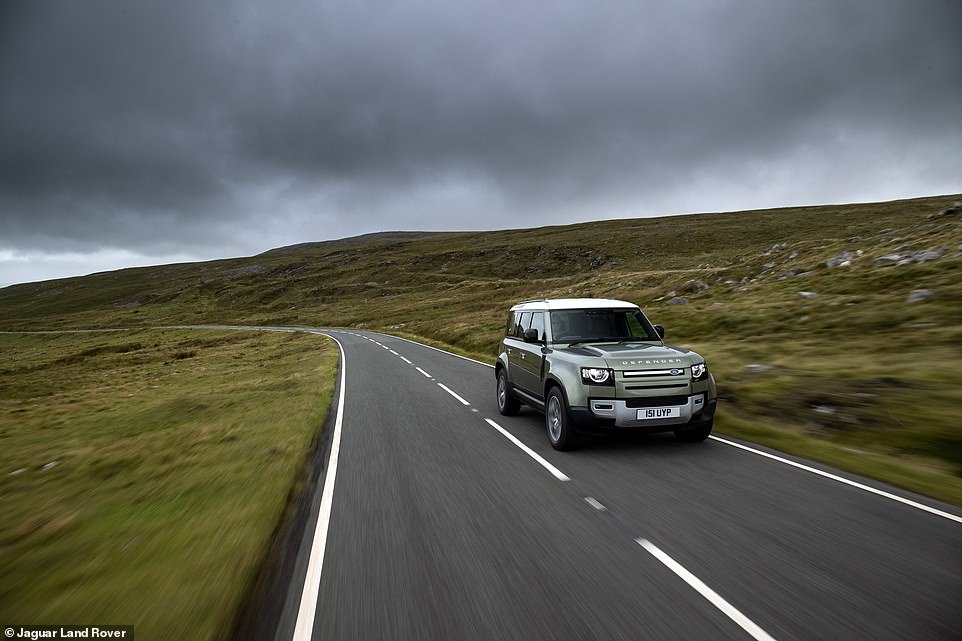 JLR said Project Zeus will ‘allow engineers to understand how a hydrogen powertrain can be optimised to deliver the performance and capability expected by its customers: from range to refuelling, and towing to off-road ability’

JLR pointed out that since 2018, the global number of fuel-cell electric vehicles on the road has nearly doubled while hydrogen refuelling stations have increased by more than 20 per cent.

JLR said Project Zeus will ‘allow engineers to understand how a hydrogen powertrain can be optimised to deliver the performance and capability expected by its customers: from range to refuelling, and towing to off-road ability’.

It added: ‘The zero tailpipe emission prototype New Defender fuel cell electric vehicle will begin testing towards the end of 2021 in the UK to verify key attributes such as off-road capability and fuel consumption.’

Ralph Clague, head of hydrogen and fuel cells for Jaguar Land Rover, said: ‘We know hydrogen has a role to play in the future powertrain mix across the whole transport industry.

‘Alongside battery electric vehicles, it offers another zero tailpipe emission solution for the specific capabilities and requirements of Jaguar Land Rover’s world class line-up of vehicles.’

Mr Clague added: ‘The work done alongside our partners in Project Zeus will help us on our journey to become a net zero carbon business by 2039, as we prepare for the next generation of zero tailpipe emissions vehicles.’

He said: ‘For years hydrogen vehicles have remained a niche segment in the industry, often limited to small production runs or concept vehicles. ‘But with the UK’s 2030 ban on the sale of new petrol and diesel cars looming closer, their use-case is becoming clearer. ‘

He added: ‘The hydrogen vehicles we’ve seen in recent years have offered significant electric range with refuelling times equivalent to conventional petrol and diesel cars, making them an ideal solution for fleets and private buyers. ‘The technology will only improve the more it is invested in. So the news of a British company like Jaguar Land Rover starting development and testing of its own fuel cell vehicle is only good news.’

‘But it needs significant Government spending across multiple countries before hydrogen vehicles can truly realise their potential.’ 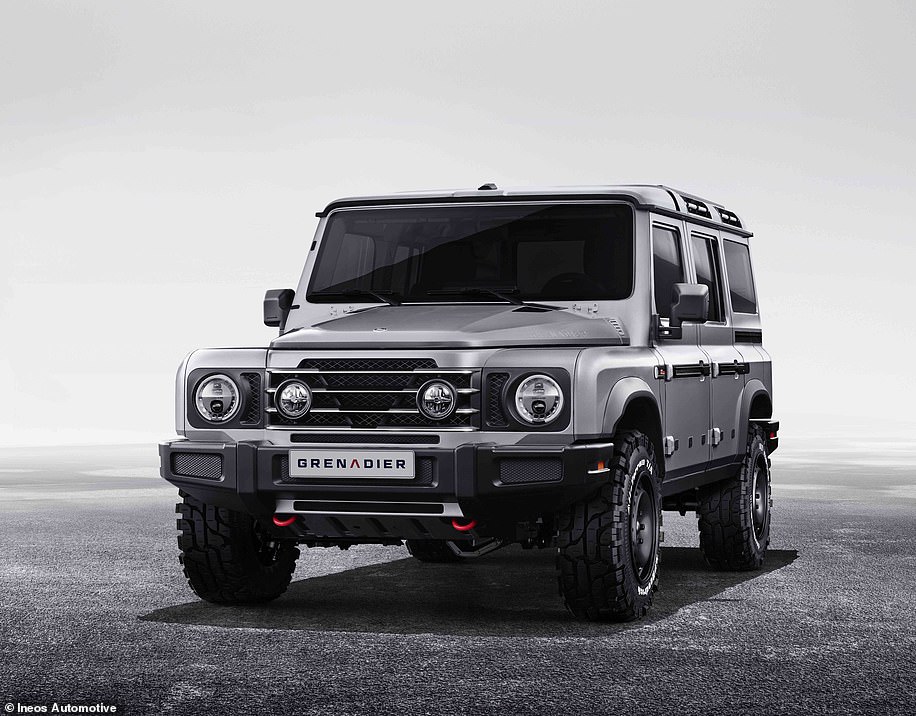 Green machine: From launch in 2022, the Grenadier will be powered by 3.0-litre BMW petrol and diesel engines, though there could be an electric hydrogen-powered version to follow after Ineos signed a new agreement with Hyundai to develop the vehicle technology

But the plan for a hydrogen fuel-cell driven electric off-roader – a back to basics rival to Land Rover Defender – goes much further and also includes moves for his refineries to produce and supply the lighter than air (though highly flammable) gas fuel to a network of hydrogen filling stations.

The recently-formed auto company aims to leap-frog the current battery-technology at the heart of most new electric cars on the market.

It would also be a particularly smart move by Sir Jim – Britain’s fifth-richest man with an estimated personal fortune of £12.2billion – whose refinery network already produces 300,000 tons of hydrogen a year, mainly as a by-product from its chemical manufacturing operations.

News of the new alliance was announced on 23 November as Ineos Automotive and Hyundai signed a memorandum of understanding – an initial business agreement – ‘to explore together new opportunities in the hydrogen economy’.

These ‘opportunities’ include production and supply of hydrogen to filling stations – as well as new hydrogen applications, technologies and business models.

Significantly it notes: ‘The two companies will also work together to explore the use of the Hyundai fuel cell system in the Ineos Grenadier vehicle.’ 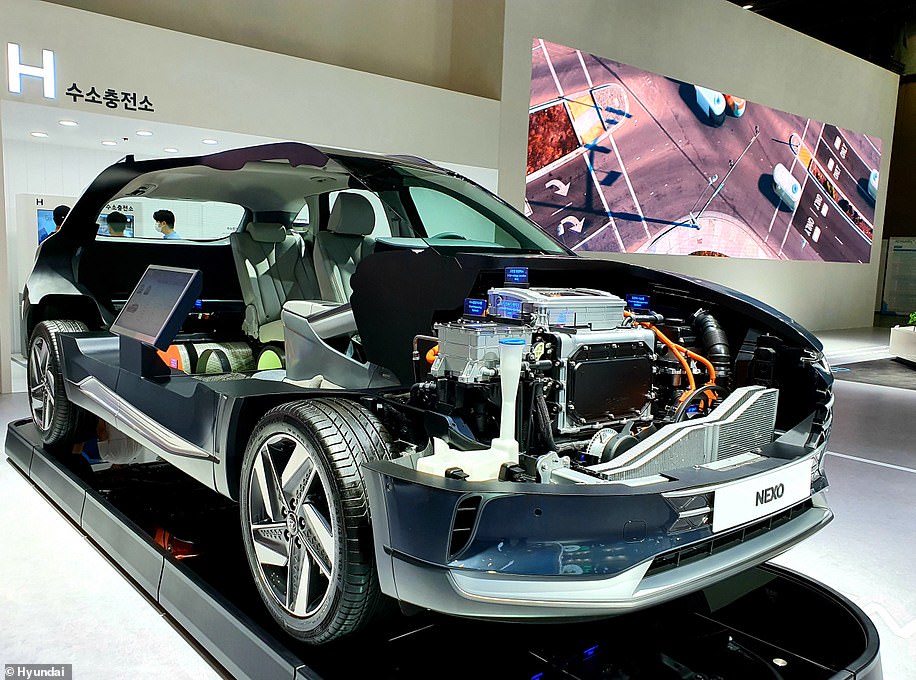 It is likely that, with the 2030 ban killing off the market for petrol and diesel fuel, Sir Jim Ratcliffe is eyeing the market for his refineries to increasingly switch to hydrogen production, which Hyundai already has developed plenty of expertise 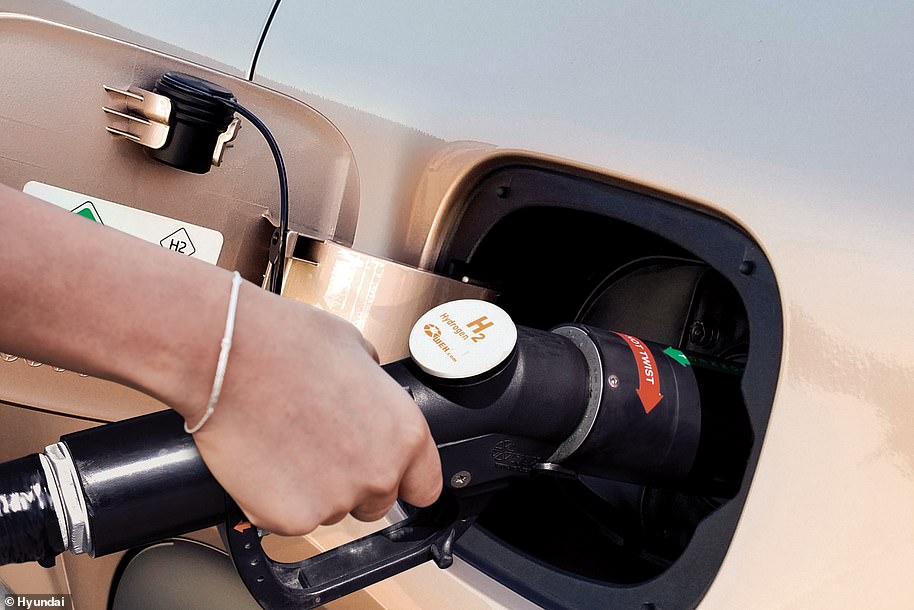 In 2018, Hyundai announced its medium to long term road map to increase annual production of hydrogen fuel cell systems to 700,000 units by 2030

This is Money revealed the potential for a fuel-cell version of the Grenadier in September 2019.

Mark Tennant, Ineos Automotive commercial director, over a year ago told us in an exclusive interview: ‘We do think that, longer term, the automotive business will simply be battery-electric vehicles. That might be right for smaller, lighter, cars but won’t be suitable for this class of vehicle.’

‘We see hydrogen as a really viable technology, especially for large SUVs.

‘We already supply a lot of commercial fleets, such as buses. For us, that looks like a much better technology option that pure electric.’

Hyundai is already a leader in hydrogen fuel-cell technology, most recently with its Nexo sports utility vehicle, and started the world’s first mass production of fuel cell electric vehicles in 2013.

In 2018, it announced its medium to long term road map to increase annual production of hydrogen fuel cell systems to 700,000 units by 2030.

Saehoon Kim, senior vice president and head of fuel cell centre at Hyundai Motor Company said its expertise in hydrogen fuel cells combined with Ineos’ expertise in chemistry will help with the mass production of green hydrogen and also fuel cells for the Grenadier.

‘Ineos’ move into the development of a fuel cell electric vehicle and hydrogen ecosystem marks yet another ‘milestone towards sustainable and clean transportation,’ the manufacturer added.

The Grenadier is set to be built at a revamped Mercedes-Benz Smart factory in France, rather than in Wales as had been originally hoped.