Black Panther star Letitia Wright was slammed by her Marvel co-star Don Cheadle on Thursday night after she posted a YouTube video that questioned the efficacy of the COVID-19 vaccine.

The British actress posted the link to a video by British Youtuber Tomi Arayomi called ‘COVID-19 VACCINE, SHOULD WE TAKE IT?’ along with a prayer hand emoji late on Thursday night.

Her post immediately sparked a fierce backlash with many asking fellow Marvel actor Don Cheadle to call 27-year-old Wright out for posting the misleading video.

In response, the actor called the video shared by Wright ‘hot garbage’ and what was said in it ‘F****d up.’

Black Panther star Letitia Wright was mercilessly crucified on Twitter on Thursday night after she posted a fact-free YouTube video that questioned the efficacy of the COVID-19 vaccine. 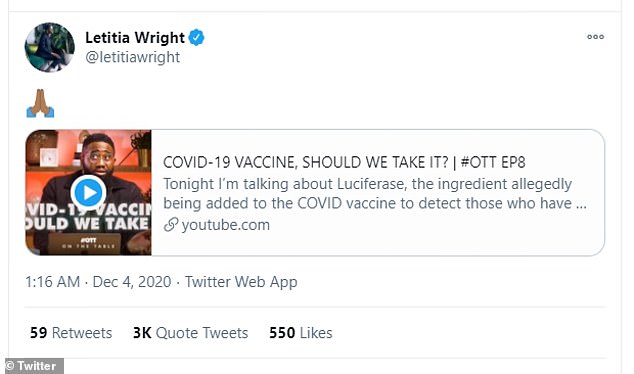 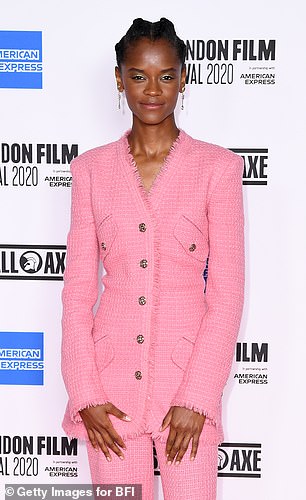 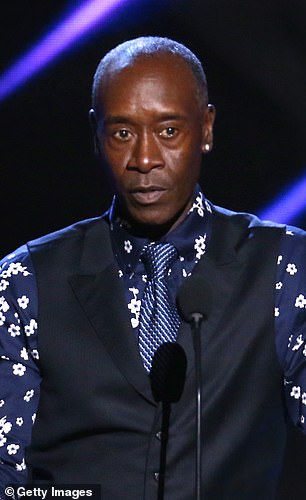 After being drawn into the argument on Twitter, Wright’s Marvel Cinematic Universe co-start Don Cheadle (pictured right) criticised the contents of the video shared by Wright, calling it ‘hot garbage’ and ‘F****d up’ 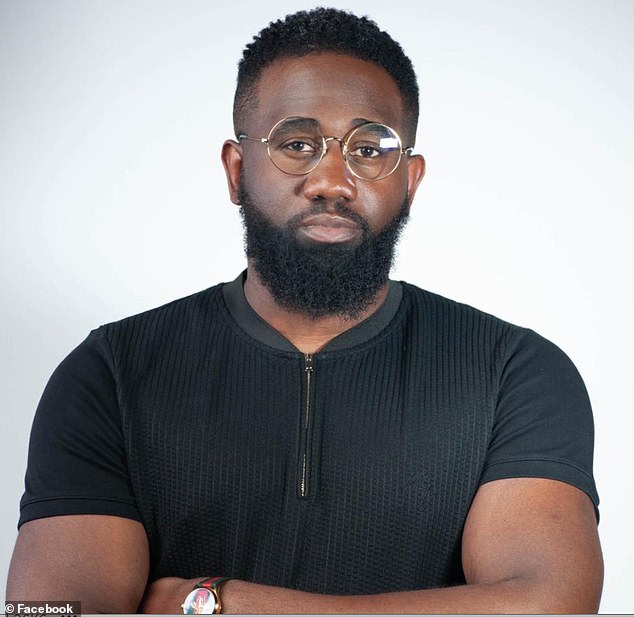 After facing a growing backlash, Wright said it was not her intention to make anyone upset and that she wasn’t saying ‘don’t take’ the vaccine, but added ‘I’m just concerned about what’s in it that’s all. Isn’t that fair to question or ask?’

Toni Arayomi describes himself as ‘a well recognised Prophet and the Managing Director of Prophetic Voice TV. An online mission that seeks to restore the ability to hear the voice of God to every person on every sphere of influence.’

As of last year Arayomi was a member of the ‘British Isles Council of Prophets’, which gathers ‘prophetic voices’ across the UK and Ireland.

The website says the YouTuber received Jesus at 15 and began ministry at 16, serving as a pastor.

Arayomi studied law at Hertfordshire University and has a wife called Tahmar and son called Harvey.

He is said to have published more than 10 books and is a co-pastor at ‘My Church’ in Windsor, Berkshire.

The website says: ‘He believes God has called him to the ministry of transformation on a personal level and on a National level.

‘Together with his wife Tahmar and his son Harvey they believe they have been called to train people to be prophets and prophets to be people.’

It continues: ‘He has proven this time and time again by influencing decision makers and world leaders in diverse Countries.’

The page adds: ‘Tomi believes in the restoration of Prophet and State- he often says- ”the day will come where governments of Nations shall seek the prophets again!’

The video she shared was from On The Table – a YouTube channel presented by Tomi Arayomi, who says he has lived all his life in the UK with his dentist mother and consultant doctor father.

Arayomi describes himself as ‘a well recognised Prophet and the Managing Director of Prophetic Voice TV.  An online mission that seeks to restore the ability to hear the voice of God to every person on every sphere of influence.’

He heads an organisation called ‘RIGnation’ that says it is ‘is a global movement focused on training prophets to be people and people to be prophets’ that offers ‘free’ taster sessions to prospective members.

‘Our aim is to raise 7,000 Apostles and Prophets from across the world who are ready to transform the world!’

The description  of the video says: ‘Tonight I’m talking about Luciferase, the ingredient allegedly being added to the COVID vaccine to detect those who have not taken it. Luciferase, named by its founder after Lucifer??? Now this is only partially true on a fact check, but we explore this and more’

Luciferase is an enzyme designed to be used in vaccines in developing countries to detect who has already been vaccinated.

It is bioluminescent and visible only under a certain wavelenght on light, hence the name. Lucifer is also Greek for light-bringer.

Luciferase is not used in vaccines deployed in the US, UK, Europe and countries with developed health care systems.

In the podcast Arayomi says: ‘I don’t understand vaccines medically, but I’ve always been a little bit of a skeptic of them.’

He complains about being ‘peer-pressured’ into being made to have a flu shot as a child.

Arayomi also complains about social media network’s censorship and accuses them and self-appointed ‘fact checkers’ of shutting down ‘any voice that does not toe the main narrative’ .

Dr Anthony Fauci has today apologised for his attack on Britain over its world-first approval of a coronavirus vaccine to treat millions of people from Monday.

Dr Fauci has backed down in the diplomatic row after he accused the UK drug regulator of failing to adequately scrutinise data from manufacturers before becoming the first country to clear the Pfizer/BioNTech jab for widespread use.

His apology came just hours after Joe Biden asked him to be his chief medical adviser – with some suggesting the next US president may have intervened.

Dr Fauci, who is also under pressure from the Trump administration to explain why the US was beaten by Britain to approving a vaccine created in America, likened London’s Medicines and Healthcare Products Regulatory Agency (MHRA) to a marathon runner who cheats by joining ‘in the last mile’.

And he raised safety questions over the speed at which the MHRA acted to approve the treatment, telling CBS News: ‘I love the Brits, they’re great, they’re good scientists, but they just took the data from the Pfizer company and instead of scrutinizing it really, really carefully, they said: ”OK, let’s approve it, that’s it’.’

But after a barrage of anger from Britain, where critics accused him of aiding anti-vaxxers, Mr Fauci later clarified his remarks, saying: ‘I did not mean to imply any sloppiness on the part of the UK regulators, even though it came out that way, I apologise’, adding there was ‘no judgement on the way the UK did it. It came out wrong. I do have great faith in the scientific and regulatory community in the UK’.

He also asks whether any coronavirus vaccine creates a human ‘chimera’ with antennas inside the body that pick up 5G signals and says ‘this could be true’.

He says he does not believe in evolution and crticises claims he ‘came from a monkey’.

Wright, who has over 360,000 followers on Twitter, defended her sharing of the video by saying she believed it is important to ‘ask questions’ about the vaccine.

‘I think it’s valid and fair to simply ask what’s in it,’ she replied to one user who was calling her out on the platform.

Further doubling-down on her position following more criticism, she said ‘if you don’t conform to popular opinions. but ask questions and think for yourself….you get cancelled.’

As the argument grew on Thursday and into Friday, Wright’s Marvel Cinematic Universe co-star Don Cheadle waded into the debate.

Cheadle is known to be outspoken on politics and other issues, and when Twitter users began tagging him in Wright’s post, he began to engage with users as well.

After watching sections of the YouTube video, Cheadle Tweeted: ‘Jesus… just scrolled through. hot garbage. every time i stopped and listened, he and everything he said sounded crazy and f****d up.

‘I would never defend anybody posting this. but i still won’t throw her away over it. the rest i’ll take off twitter. had no idea.’

Wright, who in addition to Black Panther and the Marvel movies has starred in Death on the Nile, Black Mirror and who is currently starring in Steve McQueen’s acclaimed Small Axe, faced wider backlash on Twitter as well.

Actor and musician Alex Sawyer replied to her tweet sharing the video, saying ‘This is a frustratingly irresponsible use of a platform.’

‘How so?,’ Wright hit back. ‘Did you listen to it fully or jump to conclusions on how I use my platform?’

Canadian filmmaker and YouTuber Evan Hadfield poked fun at Wright’s tweet, saying ‘I for one am proud of you, it takes guts to go on the internet and blast to millions that you intend to kill people because you think doctors know less about medicine than my one weird aunt.’

‘Luciferases are enzymes that glow under certain conditions and are really useful in medical science.

‘They literally produce light. This has precisely NOTHING to do with religion I’m afraid.’

After facing criticism on Twitter, Wright said that it was not her intention to make anyone upset, but said she was concerned about what’s in the Covid-19 vaccine. ‘Isn’t that a fair question to ask?’

After being drawn into the Twitter row, Wright’s Marvel co-star Don Cheadle called the video ‘hot garbage’ and what was said in it ‘F****d up’

Another user shared a picture that said ‘I did my own research’ with the footnote: ‘Watched someone else’s s**tty YouTube video.’

Other users pointed to host Tomi Arayomi’s previous comments on the channel that have been perceived to be transphobic, with Wright’s fans questioning why she would share a video with someone who has expressed such views in the past.

Covid-19 vaccine: Who will get the Pfizer vaccine first?

When will requirement end for COVID-19 travel?