Liverpool after being late against Milan in the first half: We have another 45 minutes to return

The official account of the English club, Liverpool, confirmed that the team has another 45 minutes to compensate and return again to the match currently being held against Italian Milan, at Anfield, the Reds’ stronghold, whose first half ended with the progress of Milan with two goals against a goal. 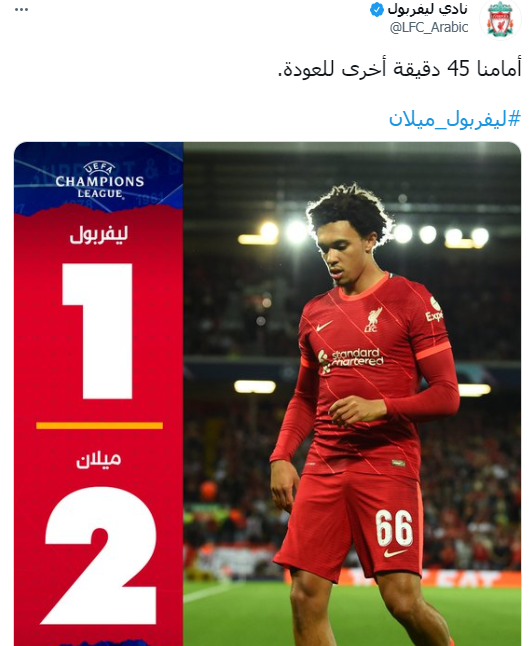 Liverpool was late against its Italian guest, AC Milan, in the first half, with two goals against a goal, in the match between the two teams at “Anfield”, in the first round of the second group stage of the Champions League group stage..

Trent Alexander-Arnold scored Liverpool’s goal in the ninth minute after receiving a pass from Mohamed Salah to launch into Milan’s defenses and hit a powerful shot in the goal.

This kick against Milan is the first time that Salah has failed since he wasted against Huddersfield Town in 2017, after which he scored 17 consecutive kicks..

Watch the worst celebrity looks on the red carpet .. “I cut them”

After Corona… Natural ways to clean the lung, most notably raising the head while sleeping

After Corona... Natural ways to clean the lung, most notably raising the head while sleeping