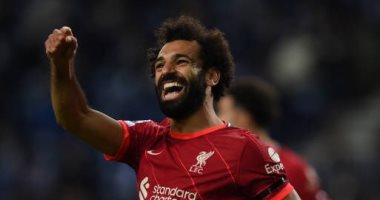 Jordan Henderson, captain of the Liverpool team, commented on his team’s 5-1 victory against Porto, during the match that brought the two teams together today, Tuesday, at the Dragao stadium, as part of the second round of the group stage competitions of the Champions League for the current season 2021-2022..

“The performance in general was very good, we should be happy with the performance and the result,” Henderson said during a post-match interview.

He added: “My role was not different today, but my role this season is to move forward, contribute and provide the balls to attack. Salah is creative again and so is Mane. It is nice that Firmino is back to play and score. It is nice to watch this trio shine together.”

During the 67 minutes he played, Salah made 36 touches to the ball, and two attempts on the goal, of which he scored two goals, with a passing accuracy of 85%, and created two chances.

In the second half, Mohamed Salah scored his second and third goal for his team in the 60th minute, before Roberto Firmino scored a double in the 77th and 81st minutes, ending the match with a 5-1 victory for the Reds.