Luc de Jong: Barcelona is the biggest in the world and Coeman now has a different striker 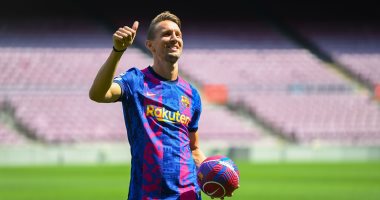 Dutch striker Luke de Jong confirmed that joining the ranks of Barcelona is the dream of his life, referring to the Catalan club the biggest step in his career, during his progress to the media as a player in the ranks of Barca.

Barcelona had signed Luc de Jong, the Seville striker, during the last summer transfers, for a season on loan until the end of June 2022.

De Jong said during his presentation conference: “I am proud to be in FC Barcelona, ​​they welcomed me in a really wonderful way, this is more than just a club, as the president said, they helped me with everything and everything I asked about and I found, I hope we have a wonderful season together.”

He continued, “Hopefully we can win many titles, we will fight for everything, I overcame my injury in the euro, I had two months off and now I feel good and great.”

De Jong continued, “Koman now has a different kind of striker and he knows that. I don’t know what Koeman plans with me. You have to ask him. I feel fit and ready to play Bayern, but I don’t know Koeman’s plans.”

“I just enjoy the game, when I was younger, I scored a lot of goals, scoring in such big stadiums is a lot of fun, I’ve been very lucky and I really enjoy doing it to help the team.”

On the fans’ doubts about his capabilities, De Jong said: “I think the coach’s message was clear, he wanted a different striker in the team, I have great confidence, I showed my efficiency at the highest level and I hope to do it here in Barcelona and I hope the fans will help me, help me feel that I am In my house, we will fight together.”

“I am very proud, I started in a small club in the Netherlands, I worked hard and now at the age of 31, I am in Barcelona, ​​one of the clubs you dreamed of as a child, it is extraordinary.”

De Jong concluded: “I am here on loan, I will work hard and we will see what the future brings. Barcelona is the biggest club in the world. It is the biggest step in my career. Playing for Barcelona is a dream come true. I am very proud of the work I have done in recent years.”