A man who sold his home in a bid to live a minimalist life spent a year living with just 44 possessions to help him become less materialistic.

Rob Greenfield, 35, from Asheville, North Carolina, first began whittling down his possessions ten years ago, after deciding to cull everything he hadn’t used for six months.

Inspired by the idea of minimalist living, in 2015 Rob sold his three-bedroom apartment, eventually moving into a home he built himself using second hand materials.

In early 2020, Rob decided to cut down everything he owned to just 44 possessions, all of which he can fit inside a backpack, and spent a year travelling around the country. 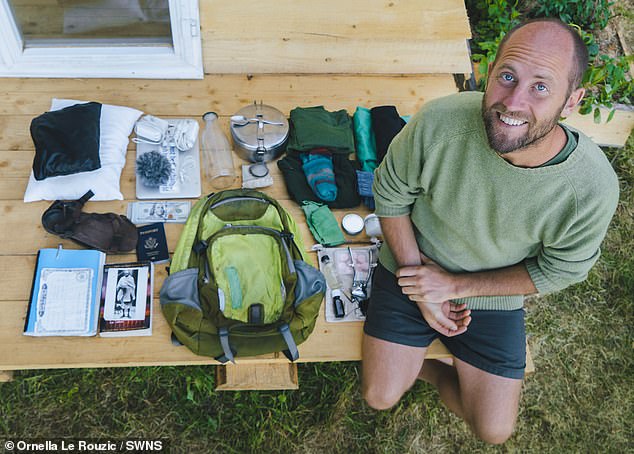 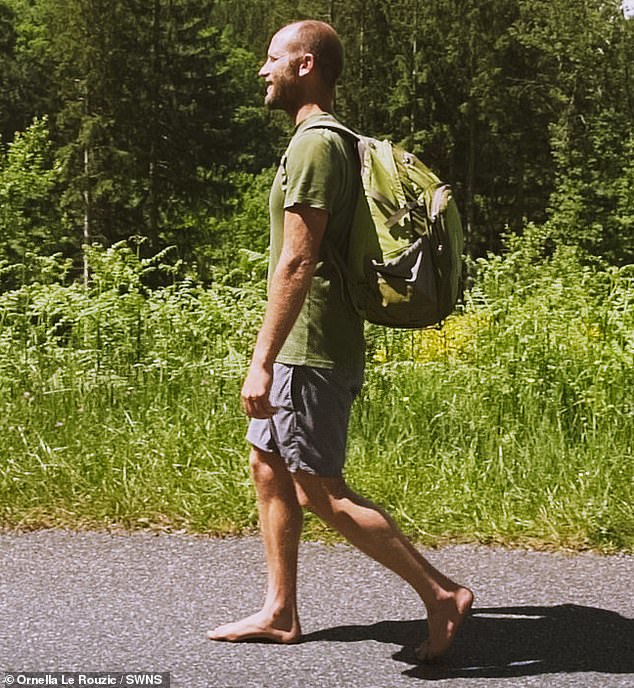 In early 2020, Rob decided to cut down everything he owned to just 44 possessions, all of which he can fit inside a backpack (pictured), and spent a year travelling around the country

‘Throughout the year I either lived with friends and used their washing and cooking facilities or camped’, he said.

‘When I camped I’d wash in rivers and lakes and cook my meals on a campfire which was a great way of connecting with nature and the earth around us.

‘Through my years of downsizing, I’ve found that material possessions don’t create long term happiness or fulfilment for me – that’s why I live the way I do.’

Minimalist Rob said his most treasured item was a postcard featuring a picture of his inspiration Gandhi, which he used as a bookmark, while the most difficult thing to give up was his phone.

‘Giving up my cellphone was the hardest thing to do because it was my form of communication with people – I didn’t know if I’d be able to function without one.

‘Before committing to ditching my phone I practiced by locking it in my draw for a month to make sure I could go without it.

‘My most treasured item out of the 44 things I owned at that time was my Gandhi postcard which I used as a bookmarker.

‘I gained a lot of my inspiration as he led by example and that’s something I’ve been trying to do for a large part of my life.’ 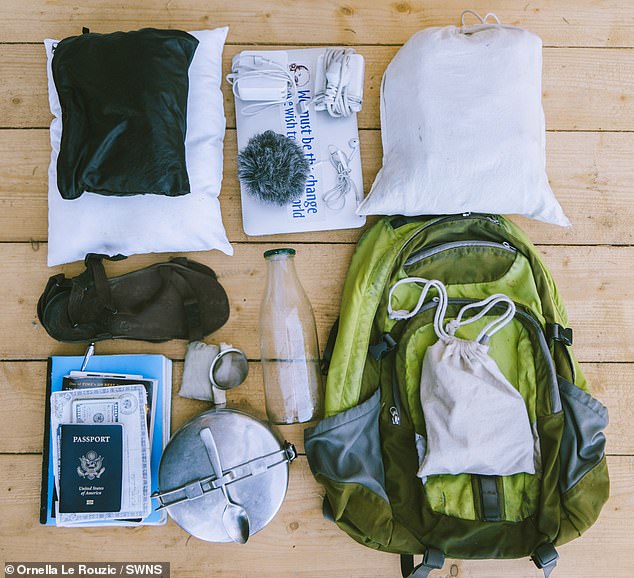 Rob whittled down his possessions to just 44 items, including twelve clothing items, toiletries, personal documents, cooking utensils, cash, a laptop and charger, notebook and pen and a pair of headphones 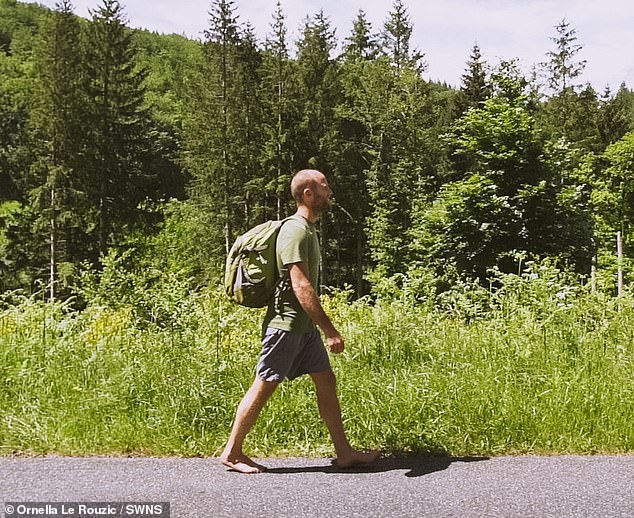 Throughout the year Rob either lived with friends, using their washing and cooking facilities, or camped, washing in rivers and lakes and cooking meals on a campfire

Rob says he decided to live life as a minimalist after realizing he was ‘stuck working to make more money’ in order to buy possessions and ‘prove my worth’.

‘The more I listened to these corporations who told me I needed all this stuff, the more I was stuck working to make more money’, said Rob.

‘I’d use the money to buy a bunch of possessions to prove my worth and my value to society when I should have been valuing myself on who I truly am.’

Rob, who used to own his own digital marketing company, set his heart on living a non-materialistic life in 2011 after being inspired by various  documentaries and books.

He started by cutting his possessions by half by getting rid of the things he hadn’t used in the previous six months and after repeating this process a few times decided to ditch his car.

In 2015 he then moved from his three bedroom apartment to a tiny home in San Diego that measured just 50 square feet. 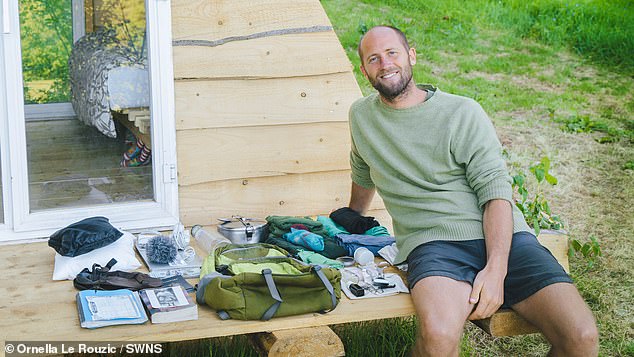 Minimalist Rob said his most treasured item was a postcard with a picture of his inspiration Gandhi, which he used as a bookmark, while the most difficult thing to give up was his phone 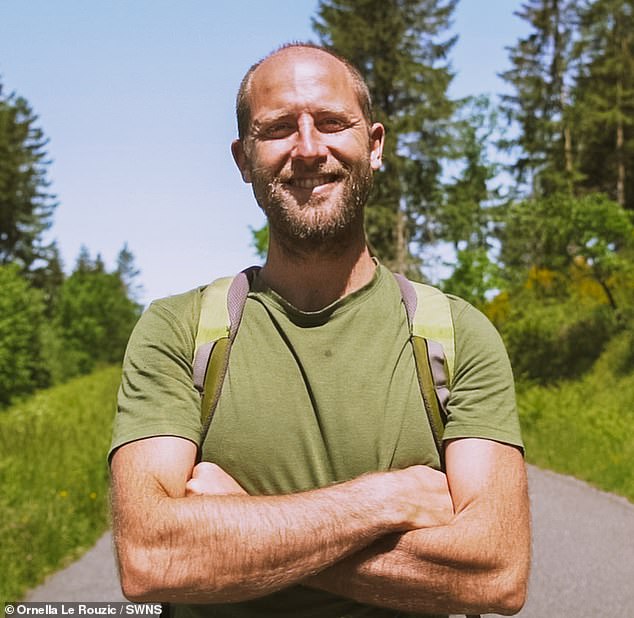 Rob, pictured walking with his 44 possessions in his backpack, says he’s ‘found that material possessions don’t create long term happiness or fulfilment for me’

Minimalist essentials: The 44 possessions that Rob lived with for a year

He lived there for a year before travelling the US and parts of Europe, at which time he reduced his possessions down to 111 items that he could squeeze into his rucksack.

On Rob’s return from his travels he moved into another tiny home in Orlando, which he built himself, for $13,000 using second hand materials.

By 2020, Rob had whittled down his possessions to just 44 items, including twelve clothing items – five shirts, two pairs of shorts, two pairs of underpants, one pair of socks, a sweater and a pair of sandals, plus a clothing bag to carry his clobber.

He carried a toothbrush, toothpaste, soap, nail clippers, floss, lavender for relaxation, body moisturizer, sunscreen, ear plugs, a hair trimmer, scissors and a bag to carry it all.

The remainder of Rob’s possessions were a backpack, reusable bag for shopping, a day pack, pot, spoon and a water bottle, as well as a tea strainer and a refillable bag of loose leaf tea.

He also carried a notebook, pen, laptop, laptop sticker, charger, headphones, book, book marker, his passport, birth certificate and cash in an envelope as he has no bank account or credit card.

Rob managed to live with his few possessions for an entire year, but admits this year has has bought a few more items to make life more comfortable.

‘I immerse in different projects for the sake of learning, educating others and getting attention for my cause,’ said.

‘My different projects will end but my entire life fits the theme of what I’m teaching people.

‘The first thing I bought after stopping was an electric razor because I’d been using a manual one – that has certainly made my life a whole lot easier.

‘One day I dream of owning nothing, but right now for me to have the best impact I can on the world owning more possessions is essential.

‘There was no clear ending point, I just went from owning 44 things to 50 things to 54 things until I eventually got where I am today.

‘Non-ownership isn’t about not using anything – it’s about making the most out of shared resources and our community which will ultimately save the world.’

Rob now runs a non-profit organization Regeneration Equity and Justice aiming to bring sustainable living to people all over the world.

An old man at the age of 89 gets a doctorate in physics.. I know his story