A protestor allegedly ‘shot in the head’ by Delhi Police during India‘s farmer’s protest has been named as a recently-married graduate from Melbourne.

Navreet Singh, 25, was driving a tractor when he was killed after the rally on Republic Day last week descended into violent police clashes.

He had joined the protests after finding himself stranded in India during lockdown after visiting from Australia to celebrate his recent wedding and introduce his new bride Mansweet to his family. 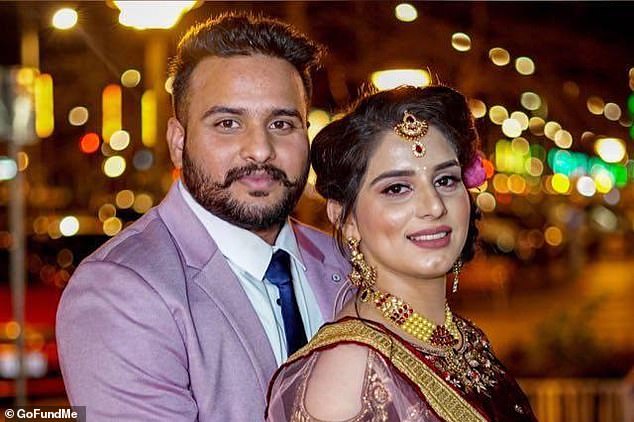 Navreet Singh, 25, and his new wife Mansweet (pictured). Mr Singh was allegedly shot by police at a protest in New Delhi on January 26 2021

Eyewitness accounts as well as video evidence and a post mortem report indicate he suffered injuries consistent with at least one fatal gunshot wound through the head.

Delhi Police has denied all involvement in the death on January 26th – claiming Mr Singh was driving dangerously and died after deliberately ramming the barricade with his vehicle.

They released disturbing footage from the scene which shows his tractor hitting a barrier before violently overturning.

But his family and protestors are adamant he was killed by police who have repeatedly faced accusations of brutality for using tear gas and batons against protestors. 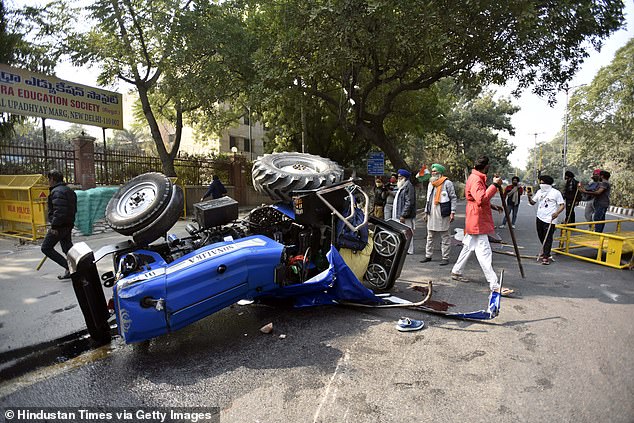 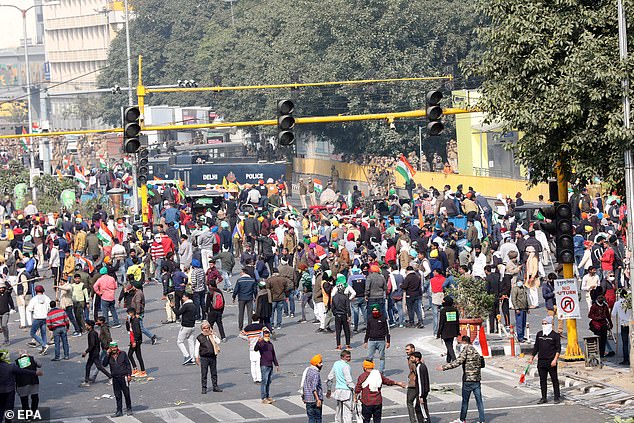 ‘The police are lying. He did not believe in any sort of violence,’ his grandfather Hardeep Singh from Uttar Pradesh told the local media.

‘He was just part of a rally to support the cause. They have murdered my grandson. The government is responsible for the entire case. The police shot him and ran away.’

Navreet – who graduated from the University of Melbourne – had been in India visiting family last year with his new wife Mansweet who he had previously married in Australia.

The pair – both originally from Uttar Pradesh – had made the trip to host wedding celebrations with their families who could not join them in Australia. 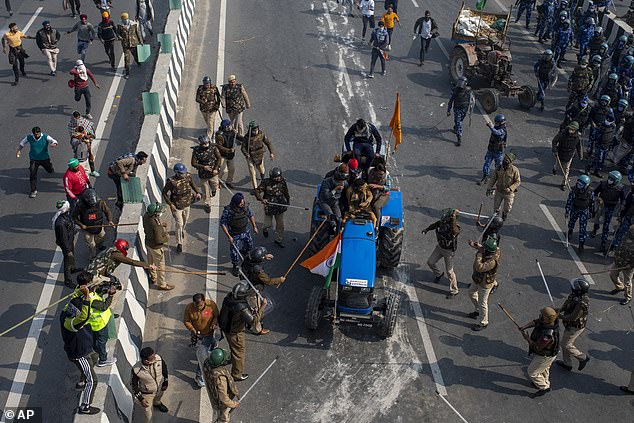 Indian policemen beat farmers driving a tractor towards the heart of the city as a sign of protest against new farm laws, during India’s Republic Day celebrations in New Delhi, India

While his wife returned to their home in Melbourne, Mr Singh who was due to follow her a few weeks later, found himself stranded after strict lockdown rules came into force.

His family said Mr Singh – an Indian national who had lived in Australia on a student visa for several years – was preparing visa paperwork in order to return to Mrs Singh at the time of his death.

His grandfather said he felt strongly about the cause so had decided to support the efforts of the farmers while he was in the country and had frequently joined the protests. 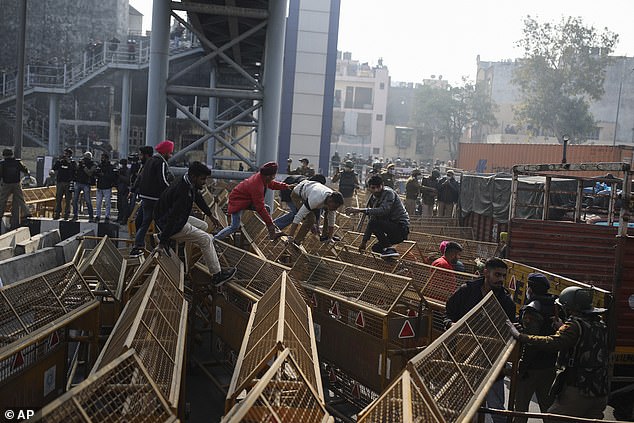 Protesting farmers jump police barricades tp march to the capital during India’s Republic Day celebrations in New Delhi, India, Tuesday, Jan.26, 2021. Tens of thousands of farmers drove a convoy of tractors into the Indian capital as the nation celebrated Republic Day on Tuesday in the backdrop of agricultural protests that have grown into a rebellion and rattled the government

As his devastated young widow is still in Australia she was unable to attend her husband’s funeral.

Dr Basil Purdue, a pathologist registered with the UK Home Office who examined the video footage and postmortem, said there was evidence to support the family’s claims.

He told the Guardian: ‘To me this is one gunshot wound, possibly two, unless proved otherwise.’

He added it was extremely implausible that Singh died from an overturned tractor, adding: ‘You cannot get these injuries from a fall.’

Attempts to report the circumstances of the death have been met by a draconian crackdown which saw the protestor’s internet cut, journalists arrested and social media accounts blocked.

The heavy-handed approach by Indian authorities against the movement has triggered an international outcry in recent days led by the likes of Rihanna and Greta Thunberg. 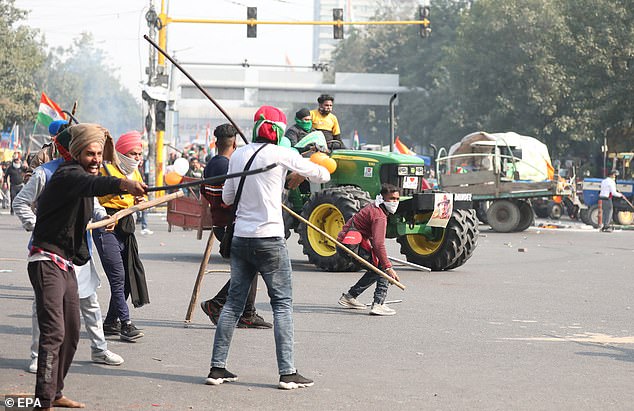 It also saw a $10,000 donation for medical aid for the farmers from American footballer JuJu Smith-Schuster.

Almost a dozen senior journalists who published stories about the gunshot claims have had criminal cases – including charges of sedition – filed against them in the past week.

Outspoken opposition politicians have also been arrested while the social media accounts of activists and supporters of the movement have been suspended.

The police are continuing to build ‘war-like’ barricades around the demonstrations sites complete with sharp iron nails and barbed wires. 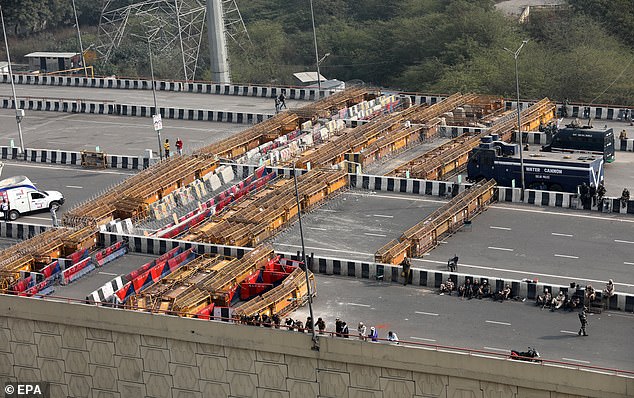 The heavy fortification of three main camps in Ghazipur, Tikri and Singhu has also seen concrete barriers erected and trenches being dug in the roads.

Hundreds of thousands of farmers have been camped – sometimes in freezing temperatures -on the outskirts of Delhi since November in protest against new agricultural laws.

They are demanding the withdrawal of new laws which they say will favour large, private buyers over producers and will destroy their livelihoods.

Up until last week the protests have been largely peaceful and cheerful– with locals showering flower petals on the farmers who in turn have been feeding the homeless.

But the situation has grown tense since violence on January 26 which saw Mr Singh killed and hundreds of protestors and police officers injured. 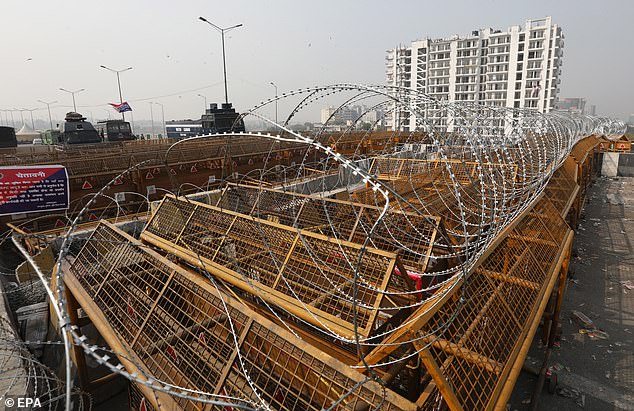 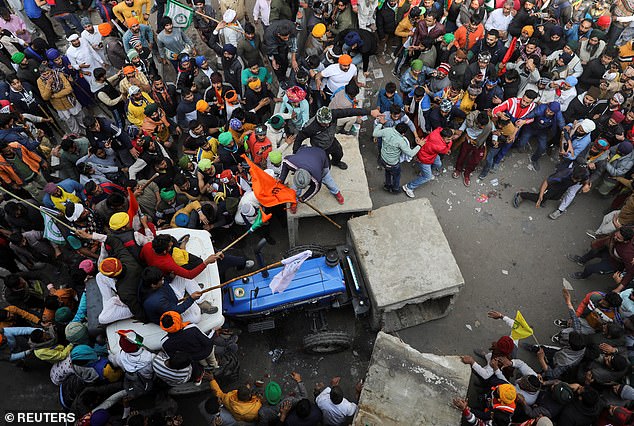 A government crackdown has seen mobile communication services also cut at the mains sites of the demo which is proving to be the biggest challenge ever faced by Narendra Modi’s government.

Protestors have complained that their electricity has been cut off and their food and water supplies have also been blocked by the police in attempt to silence their movement.

Delhi police arrested 200 people last week and accused those who breached barricades at the rally of ‘violence and destruction’.

Almost a dozen rounds of talks between the farm unions and the government have so far failed to break the deadlock.