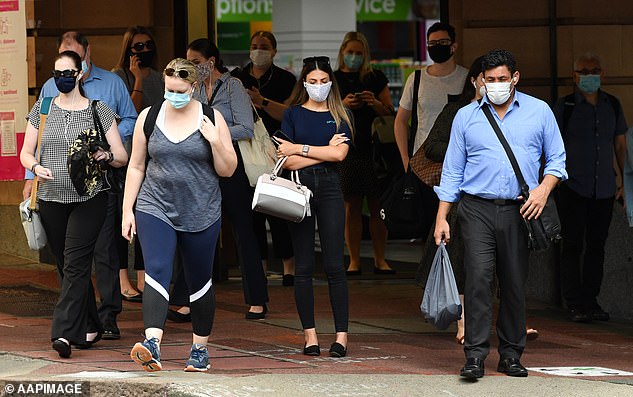 Victorians will be allowed 30 people at their home starting from Saturday after premier Daniel Andrews announced a huge easing of coronavirus restrictions.

Border closures to Sydneysiders will also be relaxed from 6pm on Friday, with just one LGA – Cumberland in Sydney’s west – still classed as a red zone.

With the exception of the Blue Mountains and Wollongong, the rest of regional NSW will now be designated a green zone.

Premier Daniel Andrews told reporters on Friday health authorities had been reviewing the situation daily to evaluate what steps could be taken.

‘Those steps, of course, have to be safe,’ he said.

‘I’m very pleased that, following further intensive work by our public health team, the chief health officer has recommended to me, and the cabinet have agreed to the following changes.

‘From 6pm tonight, all but one of the Greater Sydney LGAs that are currently red will become orange. That is to say, with the exception of Cumberland, those nine shires, or local government areas – Blacktown, Burwood, Canterbury Bay, Canterbury Bankstown, Fairfield, inner West, Parramatta and Strathfield – they’ll all move from red to orange.

‘Which means people will be able to travel to or from but they must test within 72 hours. Then they’re free and clear once they get a negative test result.’

All of Brisbane will also become a green zone, meaning residents can easily travel to Victoria.

Coronavirus restrictions eased for millions of Australians on Friday morning who will no longer have to wear face masks and can have up to 50 guests over for Australia Day gatherings.

Queensland premier Annastacia Palaszczuk lifted restrictions for Greater Brisbane residents from 1am on Friday morning, saying a ‘short and sharp’ lockdown had been successful in halting a spread of cases.

Those wanting to travel to Queensland from parts of New South Wales will have to wait a little longer, however, with a review of the border closures with Greater Sydney not expected until the end of the month.

More people will be allowed in places such as restaurants, cafes and bars with the one person per 4sqm rule slashed to 2sqm

Dancing will once again be allowed, along with gatherings of 50 people in private homes, 100 people in public, and seated ticketed venues will be allowed to have 100 capacity.

On Thursday, Queensland reported zero new locally-acquired Covid cases, with Ms Palaszczuk saying the three-day lockdown earlier this month had prevented a spread of the UK strain of the virus which appeared in hotel quarantine.

Queensland’s chief health officer has said that while masks are no longer required at gyms, shops, churches and workplaces – she said they would still be encouraged.

Ms Palaszczuk thanked Queenslanders for their efforts on Thursday in adhering to the lockdown rules, saying the easing of restrictions brought the state back to almost pre-Covid conditions.

Residents in Greater Brisbane are in for an easing of coronavirus restrictions on Friday as the city continues its run of no locally acquired cases of the virus. Pictured, Brisbane residents

The premier thanked residents for their efforts during lockdown (pictured: health workers are seen at a COVID-19 drive through testing clinic at Murarrie in Brisbane in January)

‘We have some of the lowest levels of restrictions in the country but also the world,’ she said.

‘At the moment, I get reports that business aren’t operating, they’re shut down, because they’re in lockdown, in many, many countries across the world.

The source of the virus outbreak at the Hotel Grand Chancellor, which triggered the snap lockdown has not been confirmed.

Six people – four guests, a cleaner, and her partner – caught the UK strain of the virus and were all linked to the seventh floor of the hotel but how the virus got into the hotel and spread remains a mystery.

– One person per 2sqm in indoor spaces such as restaurants, cafes and museums

– 100 per cent capacity at seated, ticketed indoor events and at open air stadiums

– Dancing is allowed at all indoor and outdoor venues

– Masks not mandatory in indoor spaces, only in airports and on airplanes

Greater Brisbane will be brought back into line with the rest of the state after having restrictions imposed following the snap three-day lockdown earlier this month when a Covid cluster emerged at the Hotel Grand Chancellor.

The number of people at weddings and funerals will be doubled to 200, while 50 people will be allowed in a home and gatherings of 100 people in outdoor spaces will be permitted.

Indoor premises such as restaurants, cafes, pubs, bars, places of worship and museums currently subjected to the 4sqm capacity rule will be able to have more people through their doors.

Capacity will be boosted with the one person per 2sqm rule coming into effect.

Standing hospitality will once again be allowed.

There can be 500 people at indoor events under the eased restrictions, with 1500 people at events held outdoors.

Ticketed events and open air stadiums will be back to 100 per cent capacity but those attending are still encouraged to wear masks.

Masks will only be required in airports and on airplanes, in line with national guidelines. They are recommended on public transport and where social distancing is not possible.

Dancing will be allowed in all indoor and outdoor venues, subject to the one person per 2sqm rule.

There will be no immediate changes to border restrictions, however. Pictured, a border checkpoint at Coolangatta

Residents are still being urged to come forward for testing after the virus was detected in sewage on the Gold Coast and in Cairns North.

‘It’s really important that if anyone is sick to just come forward and get tested,’ Queensland Chief Health Officer Dr Jeannette Young said.

Queensland has shut its borders to Greater Sydney, Wollongong and the Central Coast. Locals returning to the Sunshine State from a hotspot must isolate.

The Sunshine State is set to review their border closure rules for Greater Sydney residents at the end of January – giving New South Wales authorities just over a week to link each case to a known source.

Under the Queensland rules, the border restrictions will only be removed once there has been 28 days of zero unlinked cases.

New South Wales Premier Gladys Berejiklian has called on other state premiers to open their borders, accusing them of ‘inflicting pain and suffering’ on millions of Australians.

The Times: The Japanese government has reached a decision that the Tokyo Olympics should be canceled due to Corona