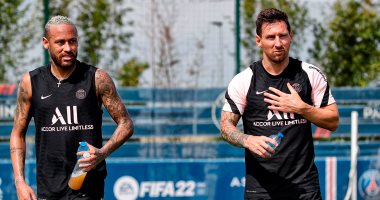 Argentinian coach Mauricio Pochettino, coach of Paris Saint-Germain, announced the absence of Lionel Messi and Neymar da Silva, the two stars of the team, along with Angel Di Maria da Silva, from tomorrow’s match against Clermont at the Parc des Princes, as part of the fifth round of the French League.

Pochettino said in the match press conference: “Brisco and Icardi trained with us this morning, and they will be available for tomorrow’s match, and for the South American players, for the sake of logic, Paredes, Messi, Di Maria, and Neymar will not be present in tomorrow’s match.”

The Argentine added: “Kylian is happy here and he is in a very positive state of mind. I am happy with the energy that the group has. As for the goalkeeper, we will choose who he will be tomorrow.”

He continued: “We have many stars, some play less and others play a lot. The most important thing is the name of Paris Saint-Germain. We have to create a cooperative group. This is an important thing if we want to have a great team.”

Regarding the renewed injury of Spanish star Sergero Ramos, he commented: “I am not worried about Ramos, he continues to recover and we hope to see him as soon as possible.”

Pochettino concluded his statements about the absences of tomorrow’s match, the most important of which are Messi and Neymar, where he said: “Yes, we have many absences. We will put the best team available for tomorrow to win the three points.”

“Noor” transformed the walls of its street from gray walls to cheerful paintings.. with brushes and colors

Bilirubin analysis reveals the percentage of bile in the blood.. Know how to understand its results

Bilirubin analysis reveals the percentage of bile in the blood.. Know how to understand its results