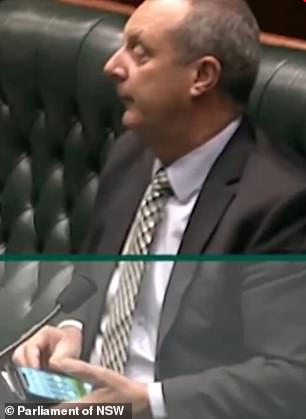 A divorced MP is under mounting pressure to resign after he was accused of sending a sex worker lewd texts during parliamentary business and allegedly offered to pay her $1,000 for a romp in his office.

The ABC on Tuesday revealed that it had obtained ‘hundreds’ of text and social media messages between NSW National Party MP Michael Johnsen and the unnamed woman.

Mr Johnsen seen in state Parliament on his mobile phone

Johnsen has strongly denied claims he sexually assaulted that same woman during an alleged paid meet up at a Blue Mountains lookout in September 2019. NSW Police are investigating the claims.

Ms Doyle didn’t name the MP involved but Johnsen later outed himself as the man accused in order to issue a firm denial and announce he was taking leave and moving to the crossbench.

But explosive texts published by the national broadcaster today have Johnsen’s career hanging by a thread.

Deputy Premier John Barilaro called on the ousted parliamentary secretary to immediately resign from Parliament over what he called allegedly ‘disgusting behaviour’.

The messages allegedly feature Johnsen commenting upon how physically aroused he was about the sex worker while in Parliament, him fantasising about her during Question Time and sending her an obscene video.

Text messages allegedly sent by Michael Johnsen to the sex worker that were published by the ABC on Tuesday show him allegedly telling her he was physically aroused sitting in the chamber, after receiving a topless image of the woman

Separate texts allegedly show Johnsen suggesting that the pair have sex in his State Parliament office, the national broadcaster reported

Separate messages allegedly show Johnsen suggesting the pair have sex in his State Parliament office after he sat through a three hour Budget estimates hearing.

‘My PH office could be fun … come to the Jubilee Room and wait for me there,’ Mr Johnsen allegedly said in a September 9, 2019, exchange. The encounter reportedly never happened.

The ABC reported that the woman sent him a topless image of herself on September 24.

A bombshell ABC report has alleged that Nationals MP Michael Johnsen sent a series of lewd messages to a sex worker from the floor of New South Wales state parliament. He last week denied an allegation he sexually assaulted a sex worker in the Blue Mountains in September 2019

When asked about the report on Radio 2GB, Premier Gladys Berejiklian said: ‘If that is correct I am absolutely disgusted.

‘For many women in public life when you know the challenges that exist – when colleagues or former colleagues do that type of thing- it is just beyond disgusting.’

Her deputy Mr Barilaro went one step further, saying he contacted Johnsen – who has already been suspended from the National Party – and told him to resign from state Parliament.

‘Following reports this morning I contacted Mr Johnsen to express the view that his position as a Member of Parliament is untenable,’ he said.

‘This is disgusting behaviour and will never be acceptable, nor should it be, and I’m calling for Mr Johnsen to resign from Parliament immediately.’

The allegations against Mr Johnsen are the latest in a string of accusations engulfing the Liberal Party, particularly in Federal Parliament, since former Linda Reynolds staffer Brittany Higgins said she was raped in a senior government minister’s office in March last year.

Johnsen issued a statement last Wednesday vehemently denying the rape claim against him and adding that he had both voluntarily spoken to NSW Police and would cooperate with their continuing investigation into the rape claim.

‘I am devastated by these allegations.

‘I am confident any investigation will conclude that I am an innocent party.

‘Without admission, I have chosen to step aside from my Parliamentary Secretary role, and will not sit in the Nationals Party Room nor the Joint Party Room.

‘I will be taking leave effective immediately for a short duration.

‘As the matter is with the NSW Police I will make no further public comment.’

Johnsen has not publicly commented on the publication of the text messages.

Ms Doyle recalled how the woman had responded to an advertisement on the website Locanto seeking a specific sex service, and the couple met at Yellow Rock Lookout.

Johnsen allegedly suggested the pair have sex in his parliamentary office. Above, NSW State Parliament on Macquarie St

‘She tells me she made herself clear that she was not willing to have penetrative sex with him, however towards the end the man moved around behind her and assaulted her in a way she had not consented to.

‘In her emails to me she said that once the assault began she just wanted it to finish.

‘It was an assault, and it was against her explicit instructions, she did not consent, it was rape.’

Ms Doyle told Parliament the woman is ‘hurt and angry this powerful man felt entitled to assault her’.

‘She remains fearful that this powerful man will seek reprisals against her for reporting this rape,’ she added.

Johnsen’s marriage of 30 years ended shortly following his election to State Parliament in 2015.

His ex-wife told a local newspaper that she blamed ‘politics, the culture that surrounds it and the lifestyle it entails’ as the reason it ended.