Test and Trace is performing worse than ever: Nearly 32,000 contacts of coronavirus-infected patients in England were not tracked down last week

Nearly 32,000 contacts of coronavirus-infected patients in England were not tracked down in the last week of September. This is the equivalent of 32 per cent of all 100,000 contacts the service tried to reach.

And a further 17,000 contacts were not reached by the service within 24 hours, or 33 per cent, the worst turn around time yet.

The failure — a clear signal the system which officials promised to be world-beating is struggling to cope with the first spike in cases — means that tens of thousands of potentially-infected have potentially been allowed to roam freely in the community.

SAGE has warned the system needs to call at least 80 per cent of all contacts and ensure they self-isolate, in order to stop the spread of infection.

Testing tsar Baroness Dido Harding was laid into by MPs today after she ignored their deadline for answers on the Excel testing scandal, which saw officials miss almost 16,000 cases.

Their anger comes as rumours swirl that Boris Johnson will close all pubs and bars in the North of England, admitting that local lockdown restrictions have failed. 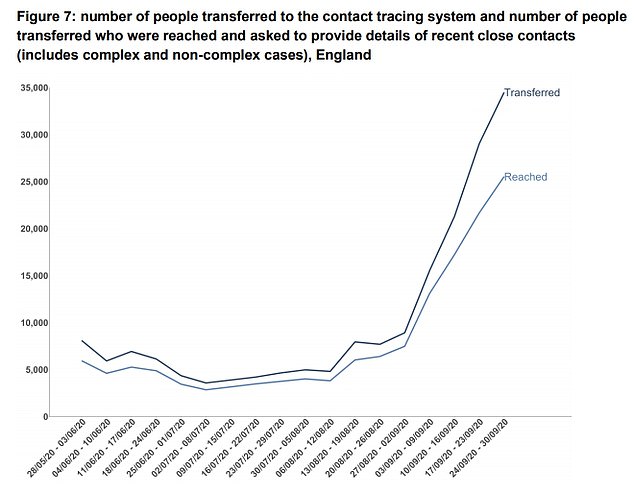 Test and Trace failed to reach 32 per cent of all those transferred to the service, in its worst performance yet, in the last week of September. SAGE has warned it needs to reach 80 per cent of all cases and get them to self-isolate to curb the spread of coronavirus 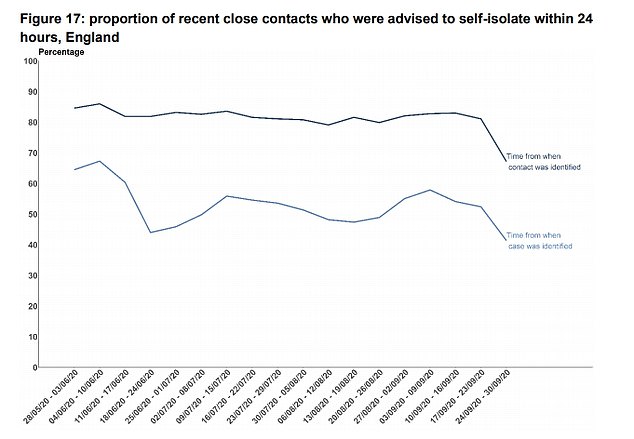 The proportion of contacts who were contacted and advised to isolate within 24 hours also fell, the Department of Health report revealed

Just one in five Britons with tell-tale symptoms of coronavirus are choosing to self-isolate, research revealed today.

King’s College London scientists, working alongside academics from Public Health England, quizzed 30,000 people living in the UK about how they have acted during the Covid-19 pandemic.

Results showed just 18.2 per cent of respondents admitted to actually quarantining themselves for 14 days, when they had a cough, fever or lost their sense of taste or smell.

And the figures were even lower for Britons who had been tracked down and asked to self-isolate by NHS Test and Trace. Just 10.9 per cent of the volunteers confessed to adhering to the guidance.

Experts behind the study claimed younger people, men, key workers and those from deprived backgrounds were most likely to break the rules.

Their paper, which was first published last week, suggested ministers should up the financial payments given to those asked to quarantine at home.

Contact tracers also failed to reach 8,800 of all those who had tested positive, the report admitted, meaning thousands more contacts were missed.

This was a worrying rise on last week, when 8,300 people who had tested positive for the virus could not be reached by the service.

And when it came to contacting positive cases, only 57.8 per cent were reached within 24 hours.

This means crucial hours were lost before contacts could be advised they had been exposed to the virus and asked to self-isolate, potentially allowing the virus to spread further in the community.

Those waiting for results from swabs are also having to twiddle their thumbs for longer, as less than 60 per cent of tests from drive throughs were turned around in 24 hours.

This is a significant drop from last week, when 70 per cent of all in-person tests were processed within a day.

The ongoing failures came as contact tracers grappled with more data than ever before.

More than 21,403 people handed over details of one or more of their close contacts to the service in the last week of September as they looked to do their bit in fighting the disease.

This is a jump from last week, when 18,000 individuals handed over details.

As the wheels come off the Test and Trace system the Science and Technology Committee turned its firepower on testing tsar Harding for ignoring their ‘generous’ deadline.

Slamming her for failing to respond to their demands within two weeks, the Committee cautioned that there are ‘serious concerns’ over the management of Test and Trace.

They also asked her to hand over information on how the 16,000 cases missed due to an Excel blunder had impacted calculations of the R rate.

And demanded that she explain what certification took place to designate an old Microsoft Excel programme as that for processing positive test figures.

They also said she would need to explain whether using Excel in this way breached any regulatory requirements for safety.

Before the blunder was announced, it had appeared that the 10pm curfew and Rule of Six was helping to stem the rising tide of infections. 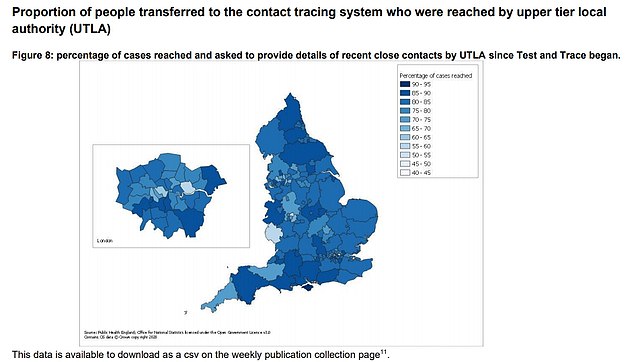 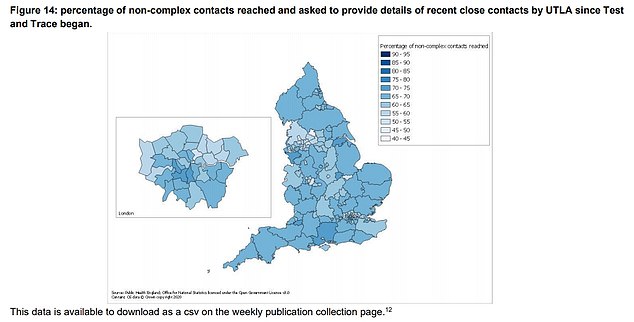 Jorge Mendes, Jonathan Barnett and Mino Raiola do deals worth £400M in the transfer window

Loophole which allows you to text, call or email a pint from your local

Covid-19: Second vaccine approved for use in UK and England’s tiers to be reviewed

MILWAUKEEE (CBS 58) --  One sufferer is in severe situation, following a capturing that came about...