Willie Mullins-trained Al Boum Photo, winner of the last two runnings of the Cheltenham Gold Cup, will tread an identical path to the Festival for the third season running with just one prep race in the Savills Chase at Tramore on New Year’s Day.

Mullins’ son and assistant Patrick said: ‘It’s a plan which seems to work. We have all these beautiful, fine chasers in the yard, the likes of Douvan, Florida Pearl, Hedgehunter, On His Own and Sir Des Champs, and they haven’t won a Gold Cup. 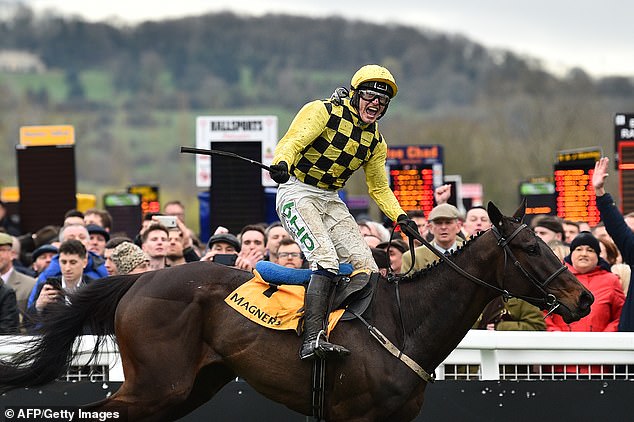 ‘Al Boum Photo doesn’t stand out from the crowd. He is not overly big or flashy and he is not a fantastic jumper but in March in Cheltenham he doesn’t miss.’

Meanwhile, stablemate Faugheen, who will be 13-years-old on January 1, is back in training. The 2015 Champion Hurdler went chasing for the first time last season, winning twice at Grade One level and being beaten a length by Samcro when third in the Marsh Novices’ Chase at Cheltenham.

Patrick added: ‘I look at his form rather than his age and what he is showing us at home. I imagine we will train him as normal and it he shows he’s still got all the enthusiasm and ability we’ll probably go again and if he doesn’t he doesn’t owe anyone anything.

‘The Gold Cup would be the dream – it would be incredible – but he could be a Ryanair Chase horse.’

Gogglebox’s Mary Killen, a passionate royal fan, says we all ought to be more Queen