A North Carolina cop allegedly declared: ‘I don’t have time for this s**t,’ before he opened fire on an 18-year-old with schizophrenia during a mental health crisis, the teen’s mother claims.

Keith Vidal was gunned down by Southport Police Detective Bryon Vassey in his home in Boiling Spring Lakes on January 5, 2014.

Vidal’s mother, Mary Wilsey, spoke out this week, describing how the shooting turned her life upside down and haunts her seven years later in an article for Insider.

Wilsey, now 56 and living in Long Island, New York, still remembers the day of the shooting vividly. She had tried to have Vidal committed to a hospital a week earlier after finding a suicide note, but when the nurse refused to take him, the mother had no choice but to monitor him herself, leaving his side only for bathroom breaks.

On the morning of the shooting, when Wilsey returned home from the grocery store and Vidal didn’t recognize her, the mother turned to police in hopes that they would help her get him the care he needed.

‘We were more concerned that Keith was going to hurt himself,’ Wilsey explained to Insider. ‘We were never concerned for our safety, because he was never a threat to anybody but himself.’

But in his own split second decision, Officer Vassey determined that Vidal did pose a threat and shot him dead at point-blank range. 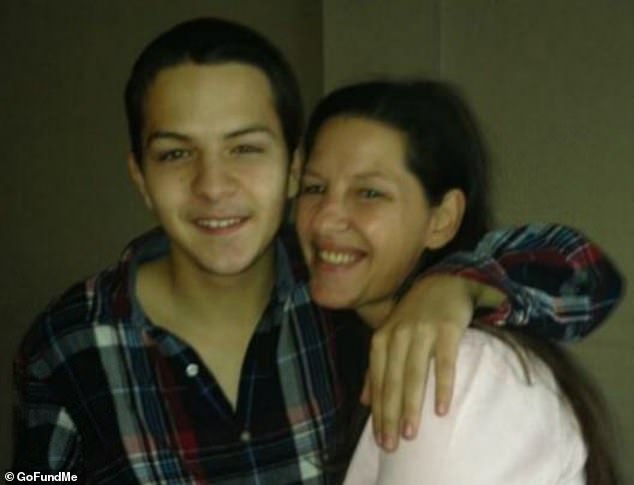 Keith Vidal, 18, was gunned down by Southport Police Detective Bryon Vassey in his home in Boiling Springs Lakes, North Carolina, on January 5, 2014 during a mental health call. Vidal’s mother, Mary Wilsey (pictured with him), described how the shooting still haunts her seven years later in an article for Insider this week 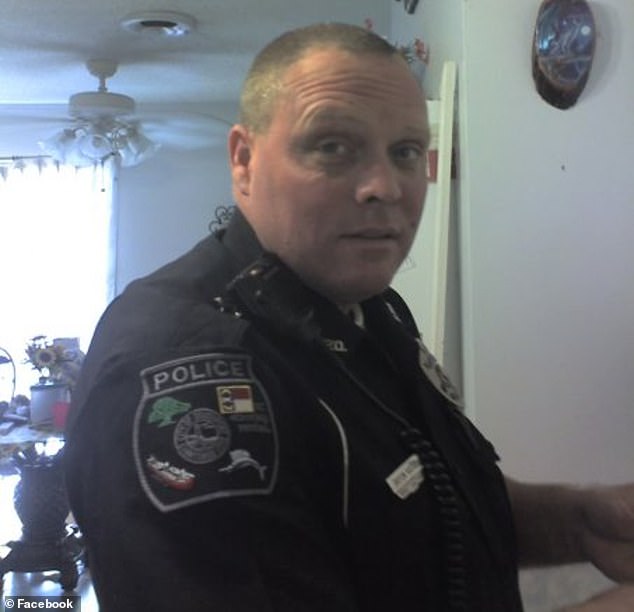 Wilsey recalled Detective Vassey (pictured) saying: ‘I don’t have time for this s**t’ moments before he shot and killed Vidal, who was diagnosed with paranoid schizophrenia

Wilsey said the responding officers should have been fully aware that this was a mental health call, not a situation that warranted use of force.

‘We explained to 911 dispatch that we have a child who has schizophrenia and that we wanted to do an involuntary [commitment],’ she said.

Wilsey said the officers were patient with her son and tried to de-escalate the situation as he experienced severe paranoia and clung to a small screwdriver.

Vidal stood in the hallway of the home and demanded that the officers leave, before Vassey pulled up about five minutes later.

Wilsey said Vassey, then 44, was wearing plain clothes and didn’t identify himself as law enforcement when he entered the home.

Vidal fled into a bathroom and when he came back out Lewis-Chavis fired her taser at him, on an order from Vassey.

The teen fell to the ground and Thomas and Lewis-Chavis climbed on top of him to take him into custody, Wilsey said.

‘So you have Keith on the floor, two cops on top of him, another cop to my left, and me and my husband all in the hallway,’ she said.

‘My husband takes the screwdriver out of his hands, and out of the corner of my eye, I see Bryon Vassey take his gun out and do a kill shot.’

‘My son is laying on the floor in the hallway, bleeding, dead,’ Wilsey said.  ‘I watched his eyes roll back in his head. I watched my son die.’

The bullet struck Vidal in his armpit and pierced both of his lungs, killing him almost instantly. 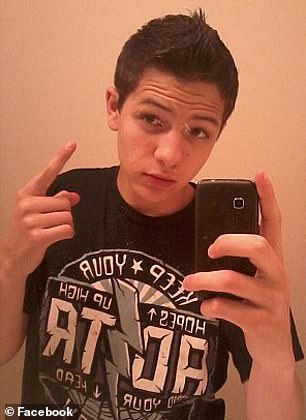 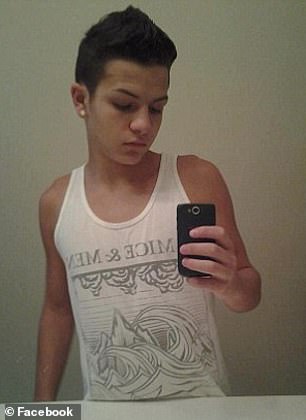 Vidal (left and right) was diagnosed with paranoid schizophrenia when he was 16, Wilsey said. The teen had been experiencing a mental health crisis for a week before his mother called 911 for help getting him involuntarily committed to a hospital

Testifying in court two years later, Lewis-Chavis said Vassey opened fire just 14 seconds after she stunned Vidal. The officer also recalled Vassey saying something along the lines of ‘I don’t have time for this s**t’ minutes earlier.

‘He blew Samantha Chavis’ eardrum out. He could have shot the other officer in the head. All this is taking place in a 3-foot hallway,’ Wilsey said of Vassey.

The mother said Vassey was only in the house for about 70 seconds before he shot her son. 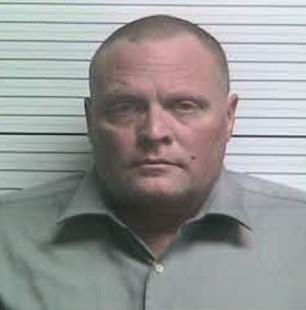 ‘He never assessed the situation,’ she said. ‘He never saw the person he murdered until he took the gun out and killed him.’

Vassey was later charged with voluntary manslaughter and was acquitted in 2016.

He initially told investigators that he fired in self-defense but changed his tune at the trial, saying he was protecting the other officers.

Thomas testified in court in that Vidal did not pose a threat, noting that the teen could not get up and both of his hands were restrained.

‘My recollection of that is he never came close to hurting me,’ Thomas said.

Asked whether Vassey made the right call when he told Lewis-Chavis to stun Vidal, Thomas said: ‘No. He was not long enough there to assess the situation.’

It was also revealed in court that Vassey had a mix of drugs in his system at the time of the shooting, including the painkiller hydrocodone, anxiety drug Klonopin, antidepressant Cymbalta, acid reflux medication and two blood-pressure medications.

Vassey testified that the drugs were all prescribed by doctors for various medical conditions. 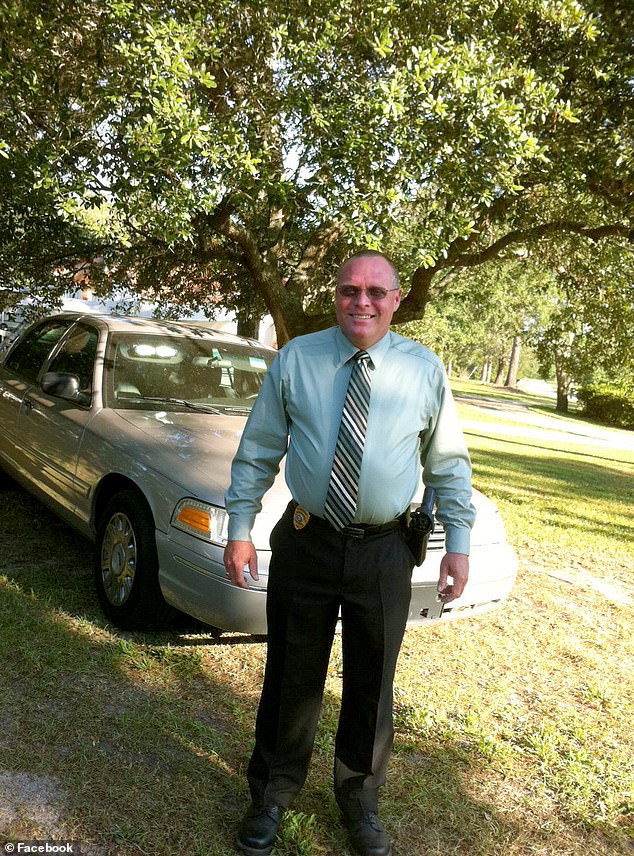 It was revealed in court that Vassey (pictured) had a mix of drugs in his system at the time of the shooting, including the painkiller hydrocodone, anxiety drug Klonopin, antidepressant Cymbalta, acid reflux medication and two blood-pressure medications

While Vassey went unpunished for the fatal shooting, Wilsey lives with the consequences every day.

‘My son is an only child. Bryon Vassey destroyed my family,’ she said.

‘My whole family had mental-health issues after. When you watch your child be murdered by someone who was supposed to help them, yeah, that kind of messes you up a little.’

Wilsey and her husband divorced after the shooting, and she moved to Long Island to be closer to her sister. She sued the city of Boiling Spring Lakes in 2016 and took home a $1million settlement.

The tragedy shook Wilsey’s faith in police to its core. She said she doesn’t believe all police officers are problematic, but she will think first before calling 911 in the future.

‘For a medical issue, I’d call immediately, because I’m not trained to handle a heart attack,’ Wilsey said. ‘Would I call for a mental-health crisis? Absolutely not.’

Wilsey is now calling for all officers to receive mandatory de-escalation training to avoid other mentally-ill people falling victim to what Vidal did.

‘I’d like these cops to be trained, and I’d like them to stop killing our mentally ill and our disabled people,’ she said.

Her plea comes at a time when police-reform advocates around the country are calling for the same measures in response to a string of highly-publicized officer-involved shootings over the last year.

Mental health crises account for about 10 percent of all police calls, according to the Treatment Advocacy Center, and about one-fifth of people shot by police are experiencing such a crisis.

Several cities around the country, including San Francisco and New York City, have formed special teams of unarmed professionals to respond to mental health calls rather than sending in police. 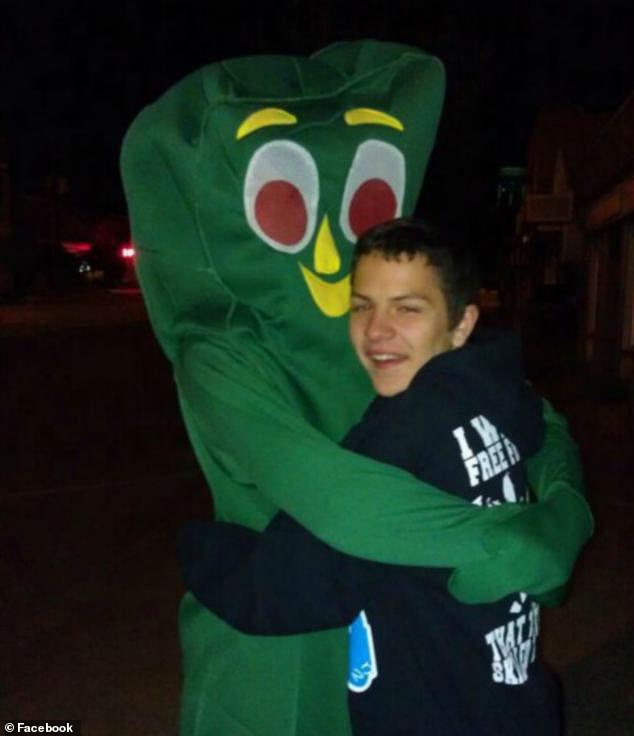 The US economy records its worst performance since World War II