A notorious lockdown dodger who breached quarantine restrictions twice, used the funeral of a drowned teen as her reason to enter the state to party with friends.

Ms Jalloh initially told authorities she was applying for a G2G pass because she needed to attend a funeral, but did not specify whose, on November 19.

It wasn’t until the party girl had crossed state lines, that she claimed to have entered the state for the funeral of the drowned teen, who was swept from Scarborough beach, in Perth on November 28. 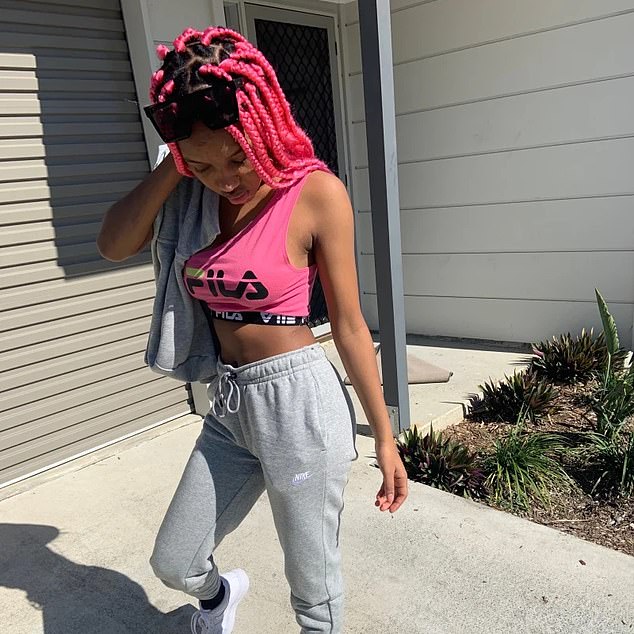 The nineteen-year-old was jailed for six months and one day for flouting Western Australia’s anti-Covid measures twenty-three times in total.

Ms Jalloh was also fined $7500 for providing false information, and has been in police custody since December 10.

Police prosecutors told the court Ms Jalloh took advantage of the fatal accident for her own benefit, and showed no empathy for the drowned teenagers family. 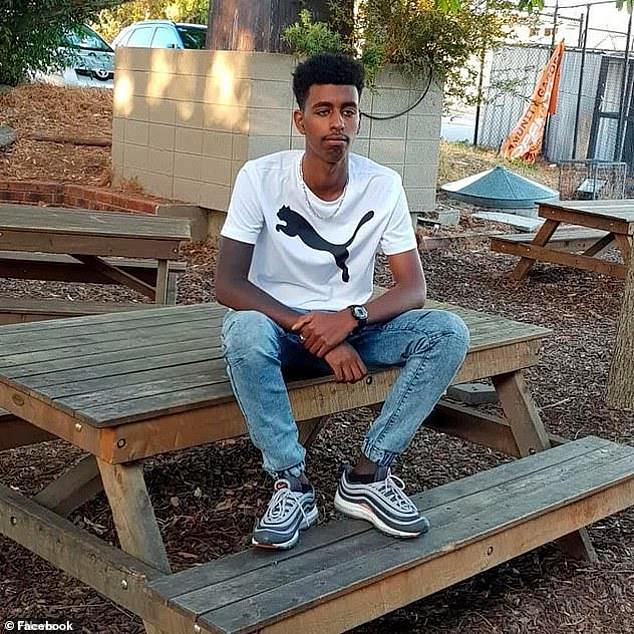 They also argued that the teenager placed the wider Western Australian community at risk, when she used false claims to enter the state.

The court was told Ms Jalloh entered the state on December 6, from New South Wales through South Australia and within hours of landing, visited a petrol station with a male.

The pair bought snacks and other items, with Ms Jalloh not wearing any form of PPE.

After returning to her hotel with the male, CCTV footage shows the teenager leaving again, only to return with another female. 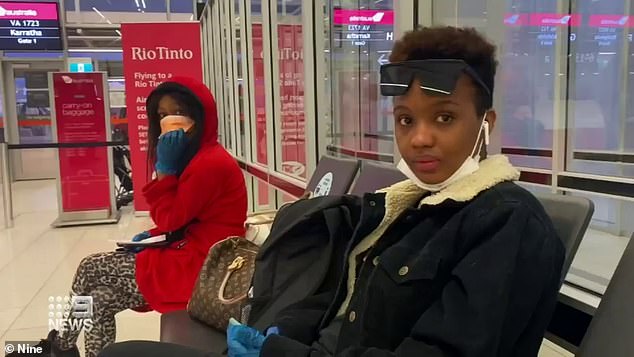 Isata Jalloh (right) and friend Banchi Techana (left) were sent back to Adelaide in disgrace, after the pair left a Perth hotel to party with ‘social media friends’ in August 2020

Over the next 36 hours Ms Jalloh received several guests in her hotel room, three different women and four different men, one of whom stayed the night.

On some occasions, the party girl and her associates were seen carrying alcohol into the hotel room.

Ms Jalloh and her three friends decided to leave the hotel at 10:30pm and were captured on CCTV footage on William Street.

The group remained outside for about half an hour, none of them wearing masks.

Police visited the hotel room on January 7, but did not find Ms Jalloh. 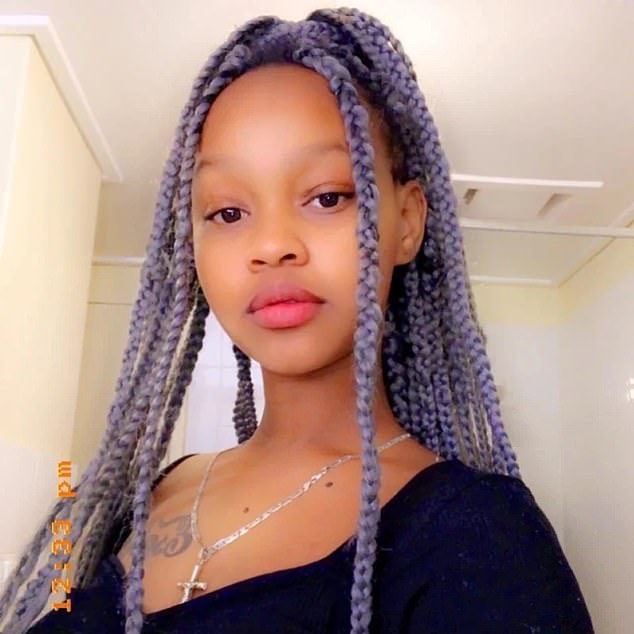 Isata Jalloh, 19, and Banchi Techana, 22, (pictured) had plotted to breach quarantine on the bus ride from the airport

When police called her mobile phone, the teenager revealed she was in Belmont Shopping Centre, and was soon arrested in a barber shop. 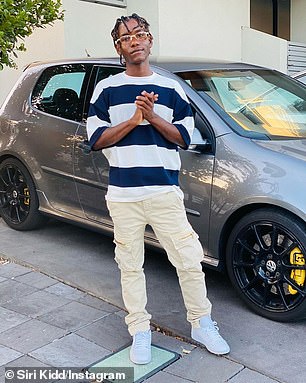 Ms Jalloh’s lawyer Sue Maharaj, arguing for a suspended sentence, told the court her client accepted what she had done was wrong, and said her behavior was immature at best.

Ms Maharaj said her client’s brother was in jail, and Ms Jalloh was the only source of support for her mother, who had arrived in Australia as a refugee.

She told the court her client had been bullied at school, lacked a father figure in her life and had cut off contact with the ‘friends’ she claimed had influenced her offending.

Mr Potter called her decision to fly from New South Wales, which was a hot spot at the time, as ‘selfish’, but said he would take the teenagers age and lack of criminal history into account. 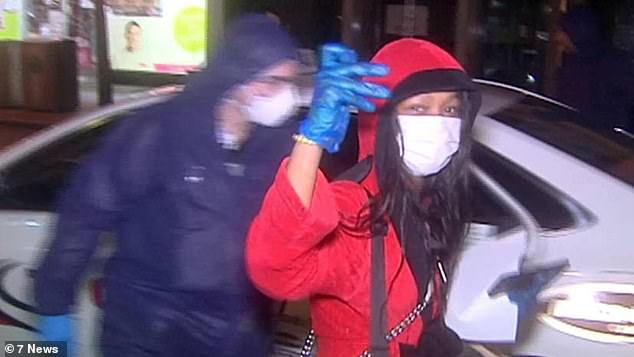 Isata Jalloh (pictured, right) and accomplice Banchi Techanan were arrested for leaving hotel quarantine the following morning, with both pleading guilty to the breach in court

Ms Jalloh was sentenced to six months, one day in jail, making her eligible for parole after three months.

The teen was also slapped with a $7500 fine for lying to authorities.

The party girl had already copped a $5000 fine the previous time she breached Western Australian quarantine law, after flying from Adelaide without an exemption.

Accompanied by friend Banchi Techana, 22, the pair snuck out of hotel quarantine for the first time, leaving the Novotel Hotel to party with friends and rapper Siri Kidd last August.

Police called Jalloh’s mobile phone to ask where the women were but she laughed and hung up on the officer. 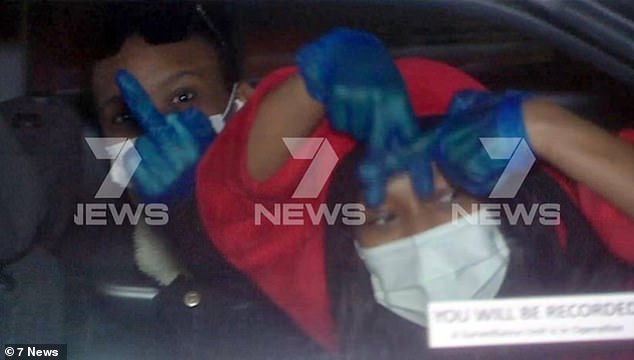 The mobile phone signal was then used to track both women to the flat.

The pair were arrested the next morning and remained in police custody for two days, before appearing before the Perth Magistrates Court, where both women plead guilty.

Jalloh narrowly avoided jail time but was fined $5000, while Techana admitted to obstructing an officer while in custody and was given an eight month sentence, suspended for twelve months.

Jalloh and Techana were escorted back to hotel quarantine before making obscene gestures as they were placed on a taxpayer-funded return flight to South Australia.

The escape of the two women from quarantine led to an immediate police review into the hotel quarantine system, while Premier Mark McGowan announced there would be a crackdown on quarantine surveillance, following the series of breaches.

West Australian authorities requested an additional 134 defence force officers, including 20 to be trained in Covid-19 contact tracing, with personnel already supporting state authorities in quarantine hotels to be doubled.

Sam Curran: England all-rounder will not rejoin England Test squad in India because of flight issues