British actor Sir Anthony Hopkins chose to visit his father’s grave in South Wales rather than fly to Hollywood where he was handed his second Oscar overnight – becoming the oldest Best Actor winner in history at 83.

Sir Anthony received the gong for his heart-wrenching performance as a man with dementia in ‘The Father’, but gave no acceptance speech until he woke up this morning.

He missed the Hollywood ceremony weeks after also dodging the Bafta Awards, deciding to paint in his hotel room instead. He only learned he had won Best Actor there because of yelling and banging through the walls.

Sir Anthony was in South Wales instead of the awards show, held in Union Station in downtown Los Angeles, California, when the trophy was presented by last year’s winner Joaquin Phoenix.

Just before his win he tweeted a video of himself in a South Wales graveyard visiting his baker father’s tombstone. The actor wrote: ‘Richard Hopkins, my beloved father, resting in eternal peace…’ and recited ‘Do Not Go Gentle Into That Good Night’ by Welsh poet Dylan Thomas, but couldn’t finish the words after becoming overcome with emotion saying: ‘God, I can’t do it, it’s too painful’.

After his no-show win on Sunday night, the award-winning actor shared a late acceptance video on Monday morning from Wales as he admitted that he ‘really did not expect’ his win.

Speaking in a short clip surrounding by sprawling countryside, Anthony said: ‘Good morning, here I am in my homeland of Wales and at 83-years-of-age I did not expect to get this award. I really didn’t.

‘I am grateful to the Academy and thank you. I want to pay tribute to Chadwick Boseman who was taken from us far too early, and again, thank you all very much. I really did not expect this, so I feel very privileged and honoured. Thank you.’

Sir Anthony said recently that his father Richard had inspired parts of his Oscar-winning performance.

He said of one scene where he rows with his daughter Anne, played by Olivia Colman: ‘What struck me was my own father was in me. I’m always on to her, nagging at her (Anne). My father was like that as he was dying, because he was frightened. He was afraid. Not mean, just irascible, scared. And it’s painful to see that. And you think of the hopelessness, the emptiness, the sadness of it all, and knowing none of us get out of this alive.’ 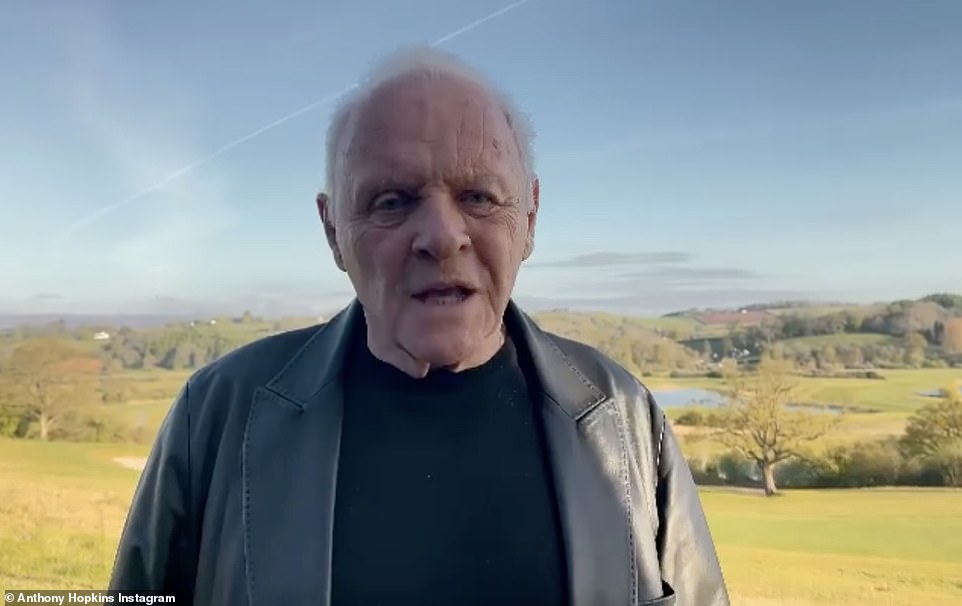 No-show! Anthony Hopkins, 83, landed his second Best Actor In A Leading Role for The Father – although he was a no-show at the event and later shared a late acceptance video from Wales 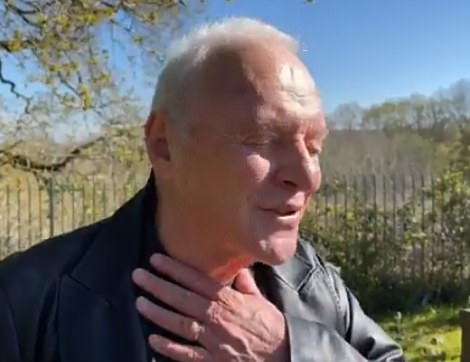 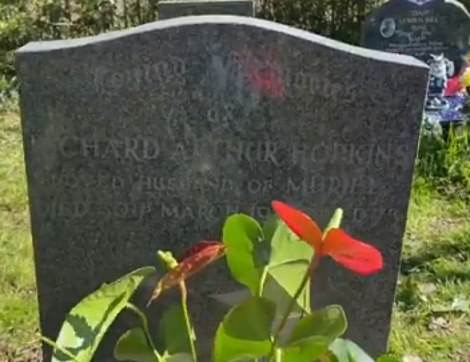 Just before his win he tweeted a video of himself in a South Wales graveyard visiting his baker father’s grave, where he broke down

The actor wrote: ‘ Richard Hopkins, my beloved father, resting in eternal peace…’ and recited a poem by Dylan Thomas 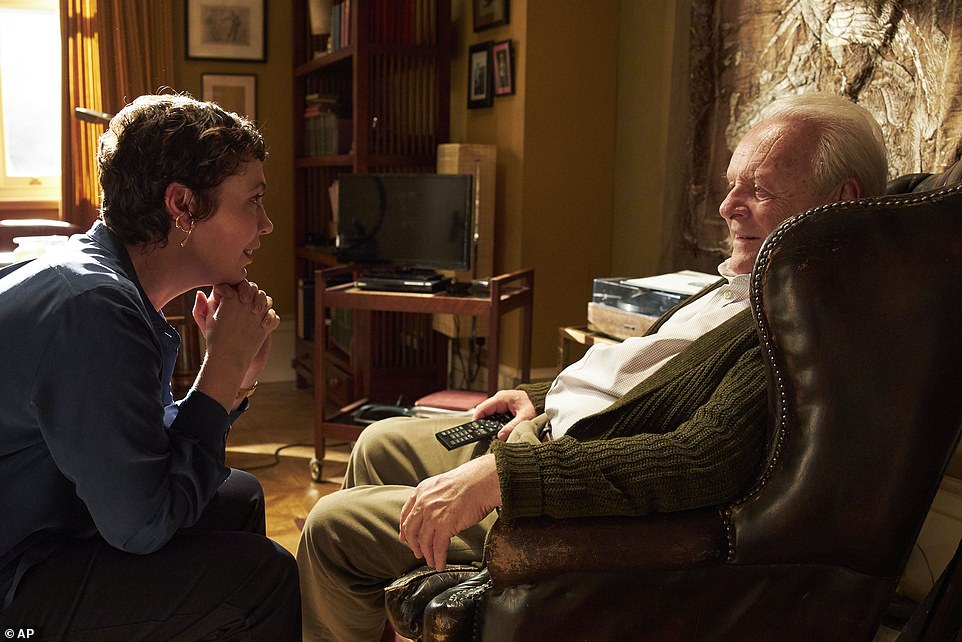 In The Father: Hopkins portrays an aging man who refuses assistance from his daughter as he begins to lose his own agency; seen here in the film with Olivia Colman 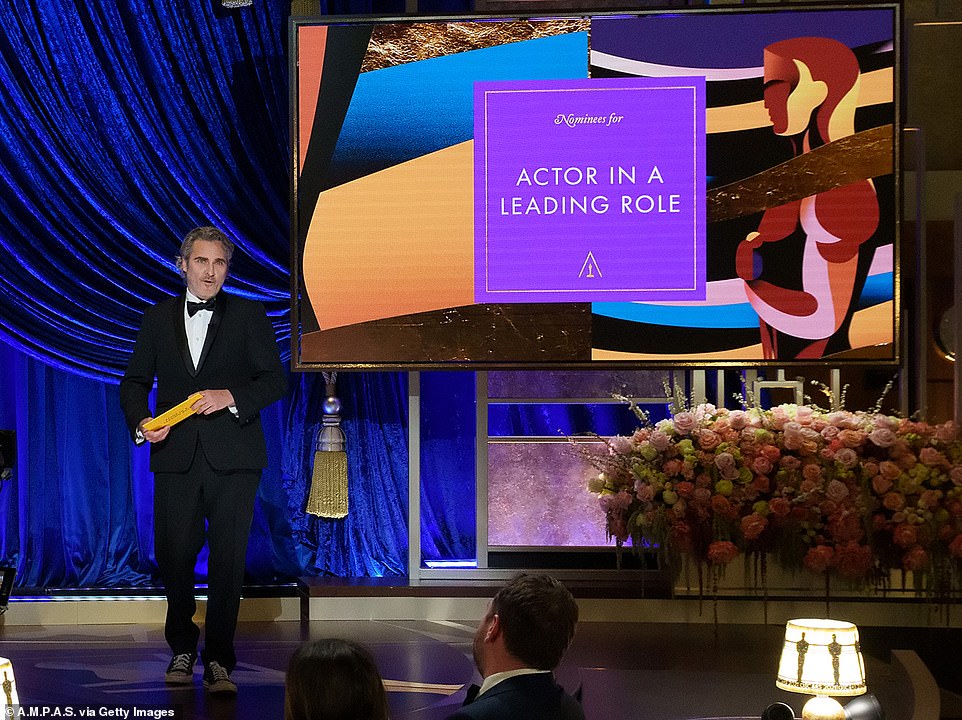 Shock: To make matters more surprising, Anthony was not even present at the awards show, held in Union Station in downtown Los Angeles, California, when the trophy was presented by last year’s winner Joaquin Phoenix, pictured

The actor became the oldest man in history to be awarded Best Leading Actor at the 2021 British Academy Film Awards earlier this month although he was again a no-show as he failed to appear at the virtual ceremony and later revealed he had been working on a painting in his hotel room in Wales.

Born in Wales, the soft-spoken Hopkins is the son of a baker whose career has seen him playing characters ranging from the late U.S. President Richard Nixon to artist Pablo Picasso, Pope Benedict and director Alfred Hitchcock.

But Hopkins says his first love was music and that he came to acting as a profession by accident. He is also an accomplished pianist and artist who has lived for years in California.

But he has been living in Wales during the pandemic,

Speaking just after his Bafta win he said: ‘I’m just so astounded.

‘I’m sitting here in my hotel room covered in paint and this cheer went up from next door – I thought, ‘Are they watching a football match?”

It was at that point he received a message from Florian Zeller, the film’s director, telling him he’d been named Best Actor.

‘I never expected to get this, you know.

‘I mean, I got to a point in my life where I thought, ‘I wonder if I will ever work again’ – an actor’s nightmare.’

Hopkins, 83, has a six-decade film, TV and stage career, but is perhaps best known for playing the brilliant but twisted murderer Hannibal Lecter in the 1991 thriller ‘The Silence of the Lambs,’ for which he won his first Oscar.

His best lead actor win on Sunday made him the oldest actor to get an Academy Award, an honor previously held by the late Christopher Plummer. 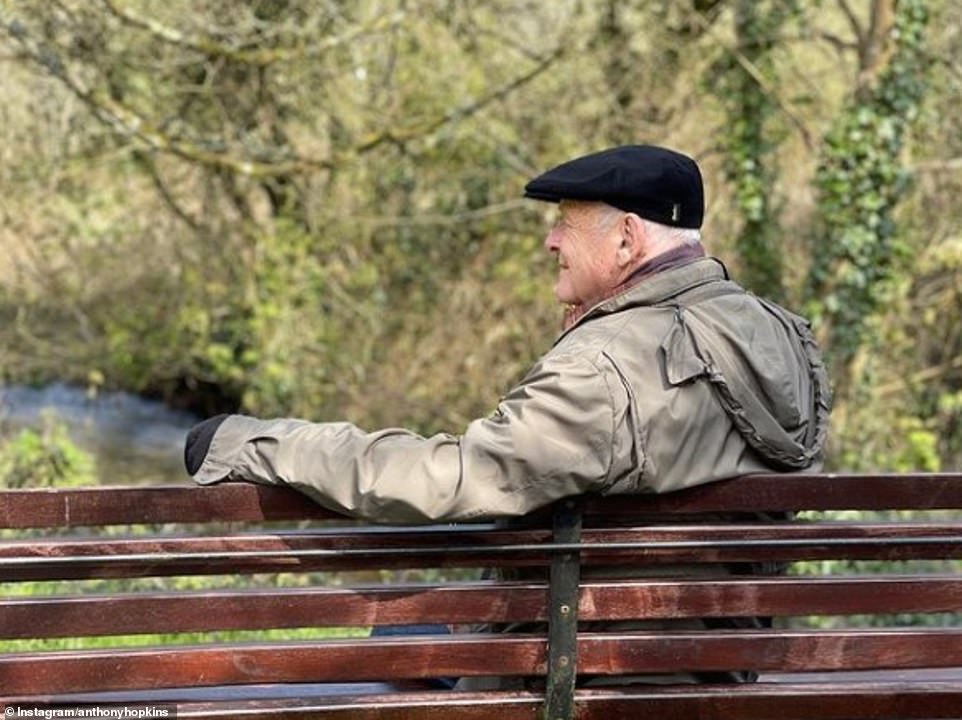 Sir Anthony has been sharing his time in Wales with his Instagram followers, including this one enjoying the spring sunshine 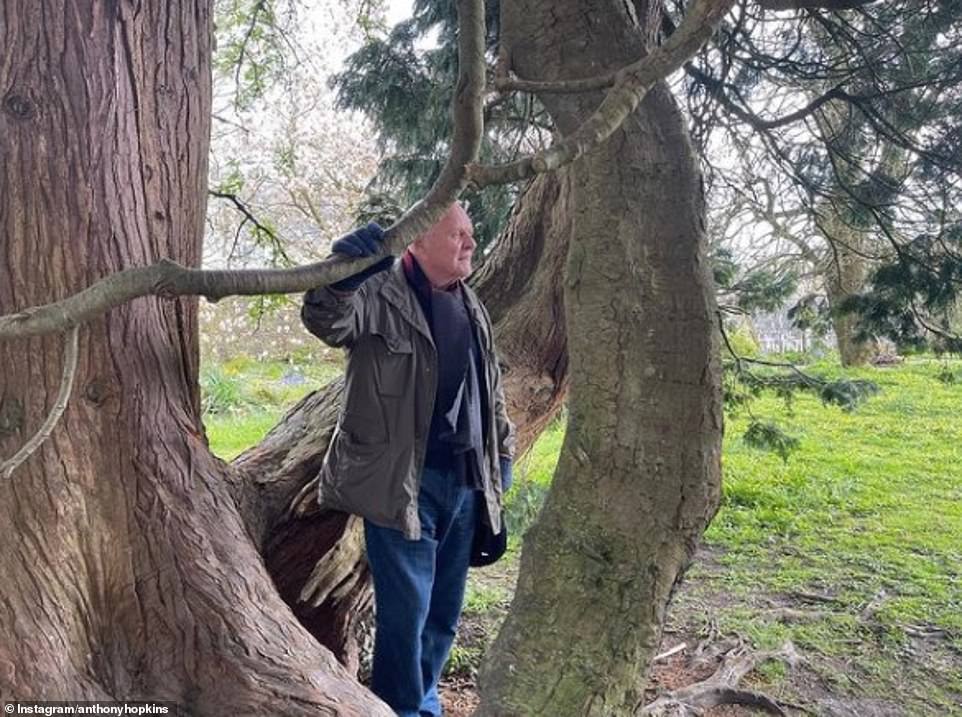 Sir Anthony also visited the grounds of his school, Cowbridge Grammar, where he was inspired to act 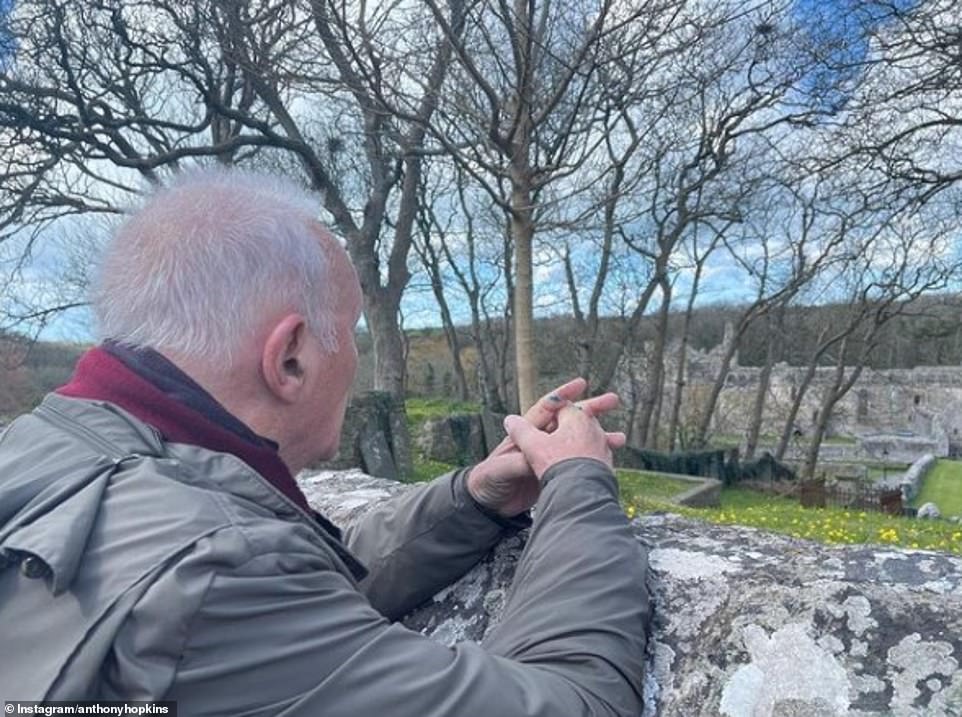 In ‘The Father,’ Hopkins plays an aging man who has refused any help from his family and who is beginning to doubt what is real and what is imagined. It is adapted from a 2012 stage play of the same name.

Hopkins told Variety that playing the role ‘made me very aware now how precious life is.’

He was made a knight by Queen Elizabeth in 1993, giving him the formal title Sir Anthony Hopkins.

Hopkins won on Sunday over the late Chadwick Boseman, who had been the presumed front runner for a posthumous, first Oscar in his final role in jazz drama ‘Ma Rainey’s Black Bottom.’

Emerald, 35, won the Oscar for Best Original Screenplay for Promising Young Woman, Daniel, 32, took home the Best Actor In A Supporting Role for Judas And The Black Messiah while Anthony, 83, landed his second Best Actor In A Leading Role for The Father – although he was a no-show and later shared a late acceptance video from Wales.

Anthony’s, who admitted he ‘did not expect’ his gong, win marks the star’s second gong after clinching the same award in 1992, for his timeless role as flesh-eating serial killer Hannibal Lecter in The Silence Of The Lambs.

Chadwick Boseman, the posthumous nominee for Ma Rainey’s Black Bottom, was considered the favourite to win at the awards event on Sunday night. 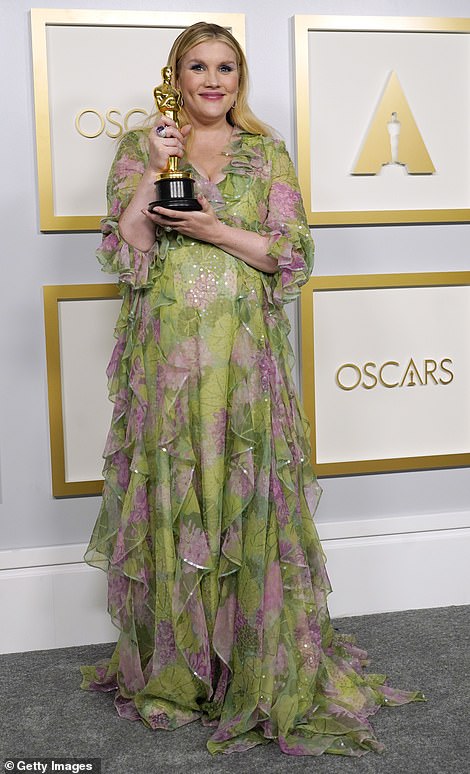 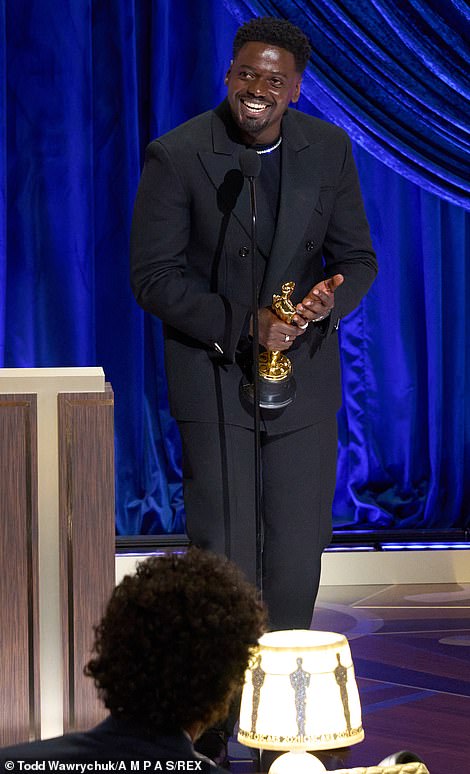 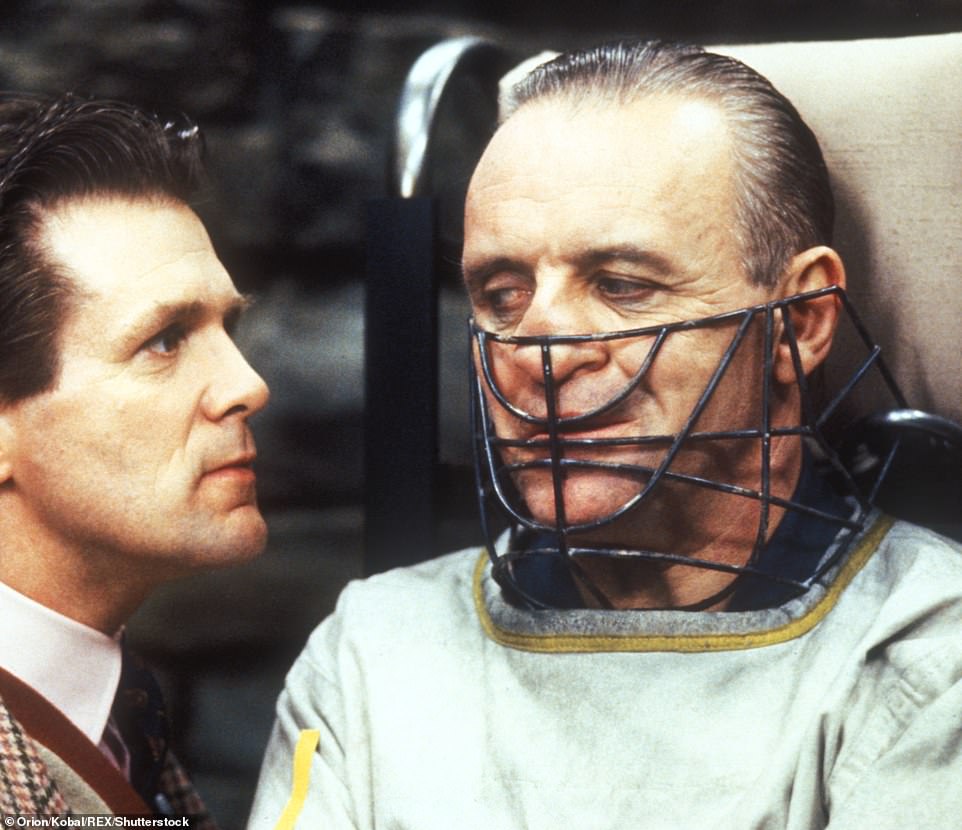 Unforgettable: Anthony’s win marks the 83-year-old star’s second gong after clinching the same award in 1992, for his timeless role as flesh-eating serial killer Hannibal Lecter in The Silence Of The Lambs (pictured)

Anthony once again made history on Sunday night as he became the oldest-ever star to win an Oscar for acting at the star-studded annual event.

That record was previously held by the late Christopher Plummer, who won his Best Supporting Actor Academy Award for 2011’s Beginners.

In The Father, Hopkins portrays an ageing man who refuses assistance from his daughter as he begins to lose his own agency.

The film was nominated for a total of six awards on Sunday, also nabbing the Best Adapted Screenplay Oscar which went to Christopher Hampton and the film’s co-writer and director, Florian Zeller.

Hopkins is no stranger to creating buzz on Oscars night, as his victory for Jonathan Demme’s Best Picture winner The Silence Of The Lambs in 1992 created a bit of controversy as well.

His performance as Lecter, opposite Jodie Foster’s Oscar-winning role as Clarice Starling, enjoys not even a half hour of screen time in the film.

At 24 minutes and 52 seconds, Hopkins’ performance trails just one other – David Niven’s role in 1958’s Separate Tables – as the shortest to win an Oscar.

The 93rd Academy Awards marked the first time Tinseltown’s finest assembled in over a year, for a three-hour show that co-producer Steven Soderbergh described as being ‘like a movie.’

The Academy of Motion Picture Arts and Sciences hosted the delayed ceremony at the historic Union Station in downtown Los Angeles, where socially distanced movie stars went mask-free while on-camera or seated in the main show room.

An official spokesperson called this year’s event ‘an Oscars like none other, while prioritising the public health and safety of all those who will participate.’