Are these the pettiest bugbears EVER? People reveal the simple things that get under their skin – from shortening ‘chocolate’ to ‘choccie’ to leaving the stickers on new shoes

Everyone has that little something that really winds them up, regardless of how insignificant it may seem to others.

Taking to Mumsnet, parents from across the UK, have revealed their very amusing pet hates – including leaving stickers attached to the bottom of new shoes and picking the pith off satsumas.

Elsewhere, another told how people who have gates at the front of their property really grinds his gears – despite admitting it has no impact on his life whatsoever.

While a further added it annoys them when people unnecessarily shorten words – including ‘pot’ for potatoes’ and ‘choc’ instead of chocolate. 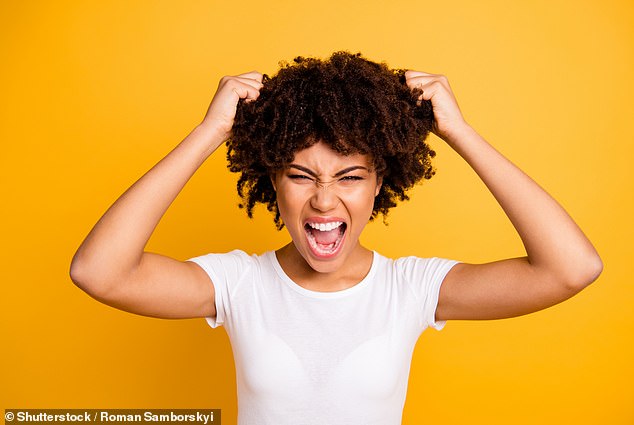 Parents from across the UK have taken to Mumsnet to reveal their very amusing pet hates. Stock image

Taking to the comment section, one person told how they get wound up when they see white labels still attached to the soles of new shoes.

‘It really annoys me when I’m walking behind someone and you can see flashes of white on the bottom of their shoes where they haven’t peeled off the labels,’ wrote one.

‘That’s the first thing I do when I buy a new pair of shoes, peel off the sole labels!’

A second person told how they get agitated when someone walking faster than them stays close behind, rather than simply overtaking.

Hundreds of people responded to the thread, with some complaining about people leaving labels and stickers on the soles of their new shoes

Another pet hate that seemed to strike a chord with many was the manner in which people eat oranges or satsumas.

‘When people eat satsumas and pick every single tiny bit of pith off,’ wrote one. ‘Drives me insane.

‘Just bung a segment or two in your mouth for goodness sake.’

Another person said they were frustrated by food packaging that encourage consumers to put them in the fridge, they felt as though they were insulting their intelligence

Elsewhere, a further commented how they get easily wound up by people who have gates at the front of their property.

Mine is when my neighbour opens the main gates to their drive, drives their car out, pulls up outside, gets out and shuts one gate, gets back in the car and drives off,’ commented one. ‘They come back, pull up outside, get out, open gate, drive in, get out, shut gate.

‘They do this whether they are out for five minutes or all day. It affects me in absolutely no way but it does annoy me.’ 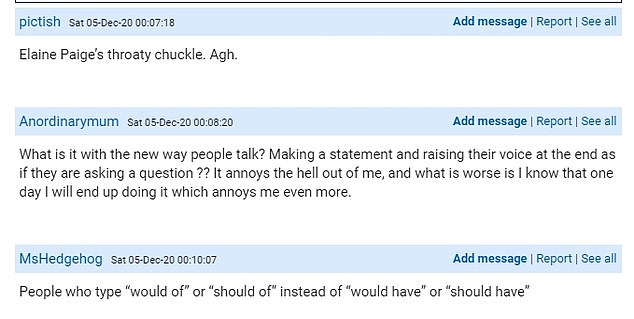 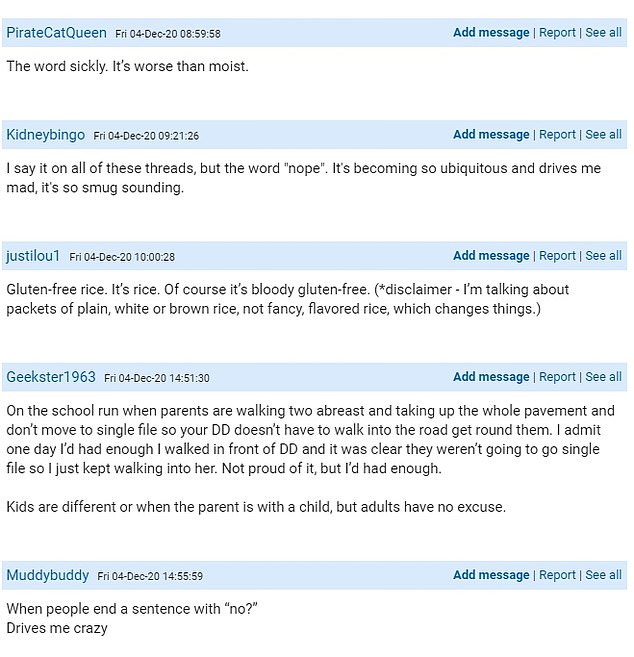 There was no shortage of examples

Even royal dogs need a seatbelt! Duchess of Cornwall is driven with rescue terrier Beth unrestrained

A British woman has been tortured and murdered in front of her 11-month-old daughter during a...