A cheeky son has sparked outrage in his family home by placing a framed photo of Daniel Andrews cuddling his cat Smokey on a shelf.

The Melbourne man shared a photo online of the image he hid inside his home, which shows the Victorian Premier clutching his pet to his chest.

He explained he printed out the photo to stir up his mother – who is not a fan of the state leader.

‘Mum hates cats and Daniel Andrews, so I put this on a shelf for her to find,’ he wrote on Reddit.

The practical joke left many in stitches, with some predicting his stunt may backfire. 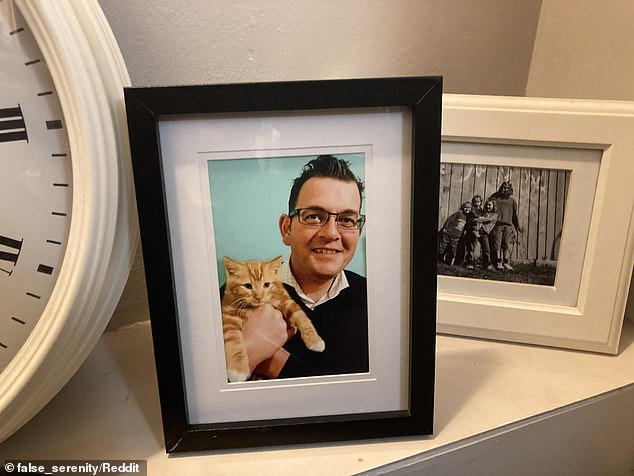 Others seized the opportunity to make jokes about the premier, who has been on leave from office since March when he slipped down stairs during a family holiday and suffered serious back injuries.

‘Enjoy being written out of the will,’ one person joked.

‘You know she’s gonna throw it down the stairs,’ another added.

‘If I did that to my mum she’d throw me down the stairs. She loves hating on Dan,’ a third chimed.

Others vowed to adopt the stunt in their household.

‘Maybe I could get one printed with him holding a roundabout. On account of my grandpa hating Dan and roundabouts,’ one person wrote.

‘How about Dan slipping on a roundabout. He’d love that!’ someone else replied.

‘I’m gonna do this but smaller versions and leave them around the house for my dad to find,’ another comment read.

The man later revealed in the comments his mother’s first reaction to spotting the photo was ‘plain horror’. 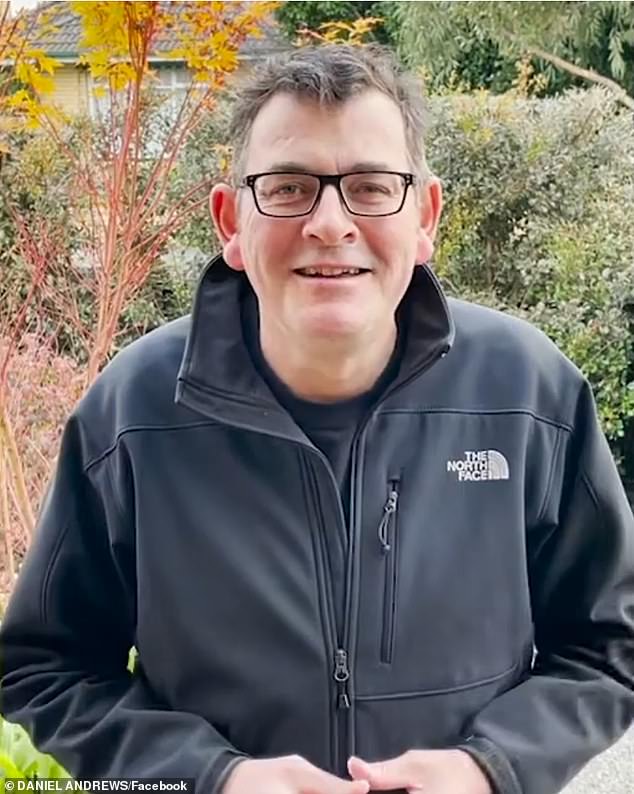 The premier (pictured) has been out of office since March, after slipping down stairs at a holiday home in the Mornington Peninsula

Mr Andrews has faced criticism over the past two years due to his government’s handling of the Covid-19 pandemic.

Victoria, which just came out of its fourth lockdown – the most of any Australian state or territory, has endured some of the toughest and strictest coronavirus restrictions in the world.

The state government has come under fire for several quarantine breaches which have sparked deadly outbreaks, and problems with their contact tracing system, which has seen Victoria enter snap lockdowns for a handful of cases.

The lockdowns have smashed the local economy, with thousands of businesses forced to close and lay off staff members, as residents were placed under tough stay-at-home orders.

The Victorian Opposition has listed 30 ‘fundamental mistakes’ made by the state government as it calls for another inquiry into its handling of the Covid-19 pandemic.

After Victoria’s fourth crippling lockdown ended last week, the Liberal Nationals want to re-open a parliamentary inquiry which was suspended in late 2020.

The inquiry heard public evidence from Premier Daniel Andrews, Chief Health Officer Brett Sutton and Police Chief Commissioner Shane Patton – but no-one could say who made the decision to use private security instead of police to guard quarantine hotels, a key reason for the state’s 112-day lockdown last winter.

Victorian Liberal leader Michael O’Brien accused the government of making 30 mistakes since then and says another inquiry is required to find out why.

The list includes the fact that Victoria failed to introduce a uniform QR code check-in system until May 28, five months after NSW, a delay which hampered contact tracers in their battle contain the latest outbreak.

The opposition also slammed the government over yet another hotel quarantine breach after it was revealed the Delta Indian variant of the virus got into the community from a returned traveller in a Melbourne hotel.

Mr O’Brien also listed the ‘alarmist language’ used by Professor Sutton – who was criticised for ‘inciting fear’ by describing the virus as a ‘beast’ – as a major failure.

He said only 13 per cent of small businesses were supported during the state’s fourth shut down and slammed the government for releasing 5,000 prisoners early because they spent extra time in their cells during Covid-19 lockdowns. 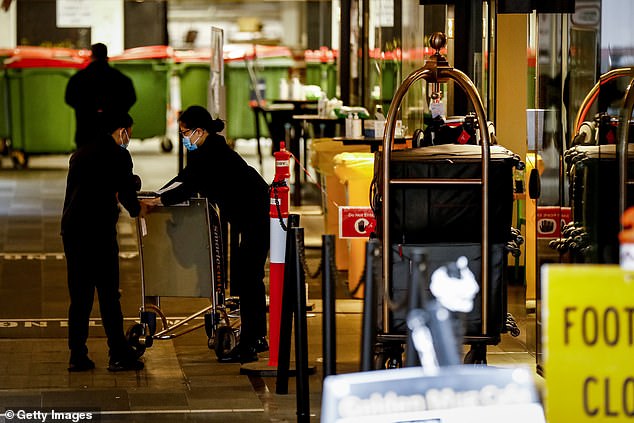 Announcing his call for another inquiry, Mr O’Brien said: ‘Victorians have worked hard to build a recovery, but it has all been put at risk by Labor failing to learn from its previous mistakes.

‘If the Andrews Labor Government continues to force lockdowns and restrictions on Victorians, then the Victorian community should have key questions about Labor’s decisions answered.

‘Victorians are suffering. Small businesses are closed, students are missing school, all the while the government is playing politics and not releasing the health advice Labor’s lockdowns are based on.

‘Victorians deserve an open and transparent government. It’s clear the Andrews Labor Government is making decisions on the run and has no plan for Victorians.’ 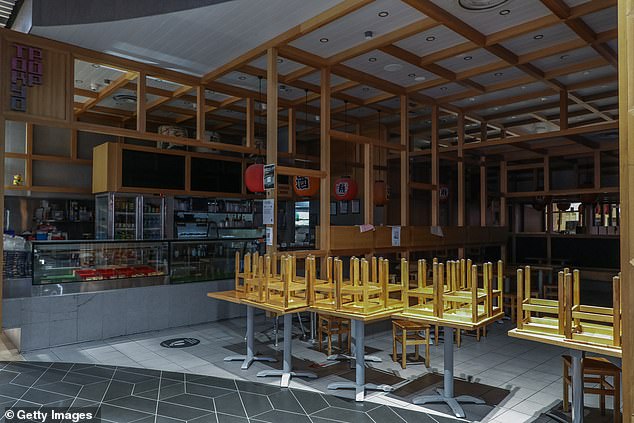 The previous inquiry was set up by Victoria’s Public Accounts and Estimates Committee.

Deputy Chair Richard Riordan said: ‘With small businesses currently suffering and forgotten, calls to mental health services at very high levels, taxpayers still picking up the bill for staff at hotels that have no quarantine guests and problems with contact tracing, the PAEC inquiry should be reopened immediately.

‘Victorians are demanding answers of their government and they are not getting them. This has to change.’

The 30 mistakes made by the Victorian government

• Use of nebuliser blamed by government for Victoria’s third wave with official leaked documents showing the government was wrong;

• Exposure sites listed by DoH incorrectly or without prior notification of establishment;

• Beyond Blue experiences increase in calls during snap 5-day lockdown and Lockdown 4;

• Almost 5,000 prisoners to be released early due to the pandemic;

• Avalon Airport on agenda to host quarantine facility despite close relationship between owners and Premier;

• Only 13% of small businesses supported during Lockdown 4; and,

• Failure by the State Government to follow through with its mandatory vaccination legislation, including the revelation only half of Victoria’s paramedics have had the vaccine.

On Monday Victoria recorded two new cases of Covid-19, both of which are primary contacts of a previously known case and have been self isolating.

The latest cases have been quarantined during their entire infectious period so they pose no risk to the community, the Victorian Department of Health said.

Victoria lifted many lockdown restrictions on Friday, but said the chances of all remaining measures being eased hinged largely on testing numbers.

The local authorities were concerned about the drop in numbers seeking Covid tests, with just 16,932 results received in the 24 hours to Monday.

Ideally, government officials said upwards of of 20,000 per day were required for there to be a confidence the virus was not circulating undetected in the community.

There were 64 active cases of Covid in Victoria as of Monday morning, with just three people receiving hospital treatment and none in intensive care. 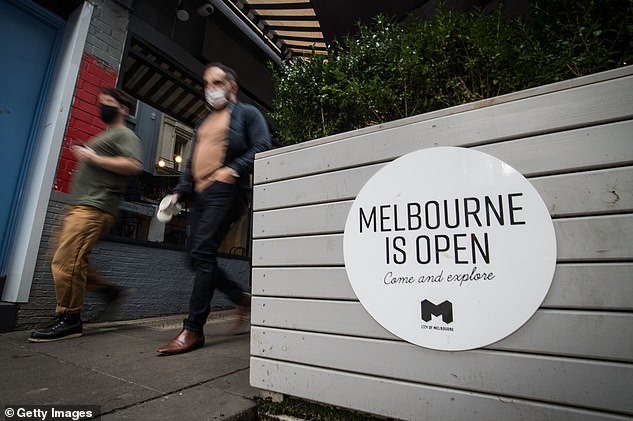 The Victorian Health Department added six locations to the exposure list overnight which are listed as Tier Two exposure sites meaning anyone who visited must get tested and isolate until they receive a negative result.

A confirmed positive case visited the McDonald’s at Freshwater Place at Southbank in the CBD, between 5pm and 5.30pm on Friday, June 11.

The person also went to Woolworths Melbourne Square on Hoff Boulevard, at Southbank, between 4pm and 5.30pm on Tuesday, June 8.

The Medibank office on level seven of 720 Bourke Street, Docklands, was also visited between 7.45am and 4.15pm on May 18.

The office building 4 Freshwater Place, Southbank, was also flagged as an exposure site, with the confirmed case visiting the site between 8.40am and 9.25am, and 4.35pm and 5.30pm on June 9.

There are currently more than 130 venues on Melbourne’s exposure list – down from 400 that were listed last week. 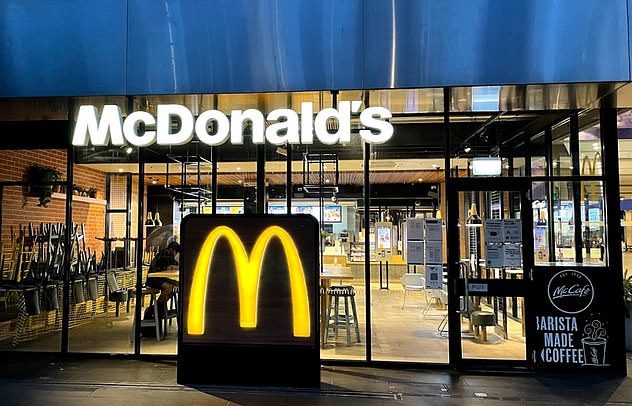 Covid fragments have also been detected in the sewage systems of a handful of suburbs, sparking concerns the virus could be in the region undetected.

There are no confirmed cases in the areas, prompting fears there is an undiagnosed infectious case still in the community.

Anybody who visited the areas between June 9 and 10 are urged to seek testing if they develop any Covid symptoms.