Pink Floyd’s Roger Waters launched an attack on Facebook and Mark Zuckerberg as he revealed he turned down ‘a huge amount of money’ for the rights to use one of the band’s songs in an Instagram ad.

Speaking at a pro-Julian Assange event in New York City on Thursday, Waters showed reporters a request from Facebook for the rights to use Pink Floyd’s 1979 song Another Brick in the Wall (Part 2).

Sitting at a panel, Waters held up a document that he said had arrived to him that morning.

‘It’s a request for the rights to use my song Another Brick in the Wall (2) in the making of a film to promote Instagram,’ Waters said to laughs from the audience.

‘It’s a missive from Mark Zuckerberg to me with an offer for a huge, huge amount of money, and the answer is “f*** you, no f***ing way,”‘ he said, prompting applause from those attending the event. 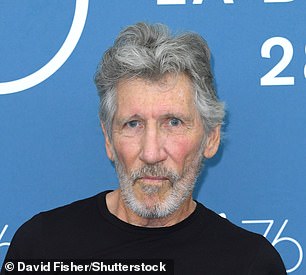 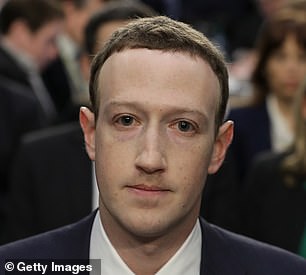 Pink Floyd’s Roger Waters (left) said he had turned down an offer for a ‘huge amount of money’ from Facebook for rights to use the song Another Brick in the Wall (Part 2) in an ad for Instagram. Waters, in particular, took aim at Facebook CEO Mark Zuckerberg (right), calling him ‘one of the most powerful idiots in the world’ 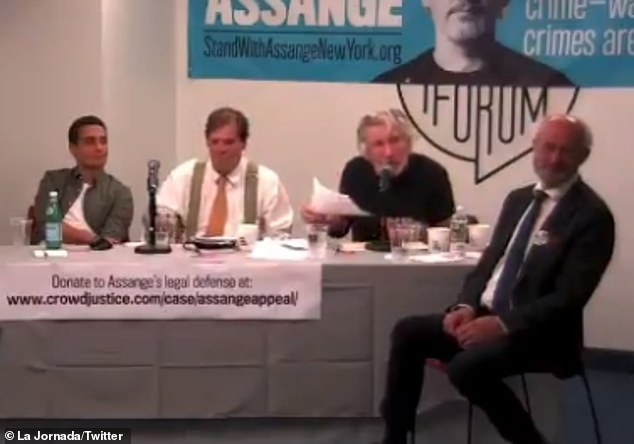 Waters (second from right) made his remarks to reporters at a recent pro-Julian Assange event in New York City, and suggested Facebook was censoring stories about Assange, who is facing possible extradition to the US for his role in publishing leaked US Army intelligence

The rock icon went on to describe the request from Instagram as ‘an insidious movement of them to take over absolutely everything.’

‘Those of us who do have any power – and I do have a little bit in terms of the publishing of my songs I do anyway – so I will not be a party to this bulls**t, Zuckerberg,’ he said.

Waters also made reference to Zuckerberg’s FaceMash, a project the tech billionaire worked on before creating Facebook while he studied at Harvard.

It allowed users to rate the appearance of women on campus.

‘And yet here he is, one of the most powerful idiots in the world.’

Waters also told reporters that he believed Facebook sought to censor stories surrounding Assange, who is currently jailed in the UK and is awaiting possible extradition to the US for his role in publishing US Army intelligence leaks. 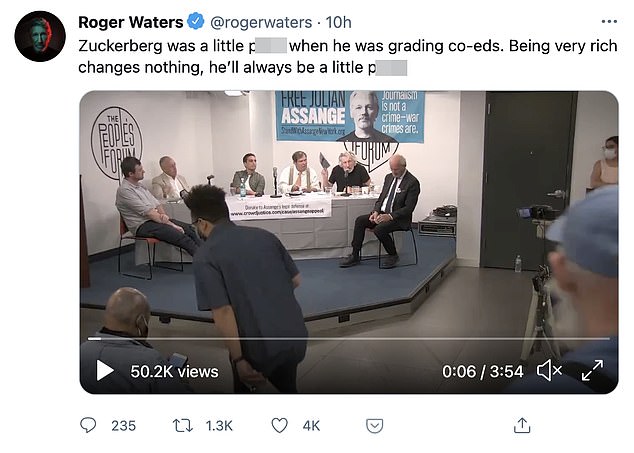 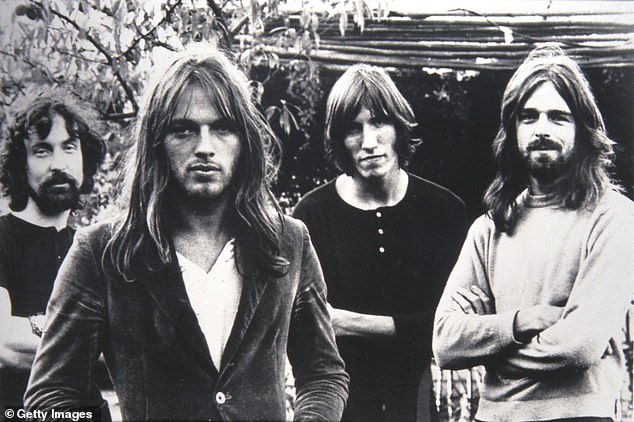 Pink Floyd’s Waters said he would not allow his works to be used to make the social media giant more powerful than it already is. Pictured: Pink Floyd in 1973 (L-R; Nick Mason, Dave Gilmour, Roger Waters, Rick Wright)

He read out what he said was a section of the request from Instagram.

‘We want to thank you for considering this project. We feel that the core sentiment of this song is still so prevalent and necessary today, which speaks to how timeless a work…

‘It’s true,’ Waters said. ‘And yet they want to use it to make Facebook and Instagram even bigger and more powerful than it already is so it can continue to censor all of us in this room, and prevent this story about Julian Assange getting out to the general public so the general public could go: “What? What? No. No more. Nada más”‘

After his comments hit the news Wednesday, Waters doubled down, sharing a video of the event on Twitter with the comment ‘Zuckerberg was a little p**** when he was grading co-eds. Being very rich changes nothing, he’ll always be a little p****.’

A Facebook spokeswoman confirmed that the Instagram marketing team had reached out for the usage rights of Waters’ song and that the company respects the decision of any artist on whether or not they want to be involved.

She noted that Zuckerberg had no involvement in the exchange. 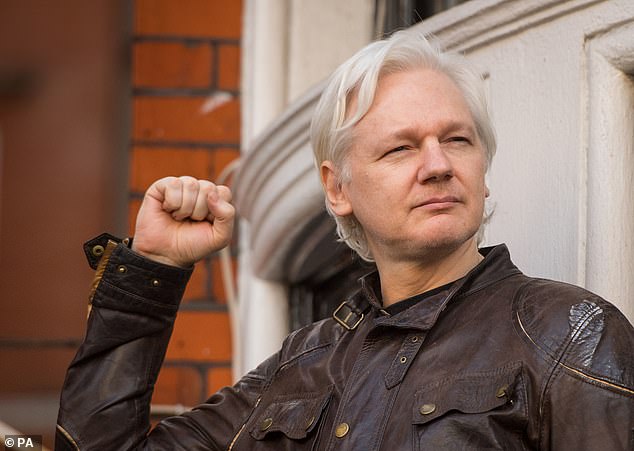 Murray, a long-time confidante of Assange, wrote on his blog last year that his traffic from Facebook and Twitter dropped drastically during the WikiLeaks founder’s extradition hearing, which began in September 2020.

He claimed that he usually receives around 50 percent of his readers from Twitter and 40 percent from Facebook links, but that the numbers had dropped off to 3 percent and 9 percent, respectively during the hearing.

Hearings in February brought around 200,000 readers to his site daily, he wrote, adding that that figure was only 3,000 during the extradition hearing.

Facebook and Instagram have faced accusations of bias in their algorithms from other activists groups, including most recently on posts related to Palestine.

Last month, the app announced it was changing its algorithm amid the accusations, saying the current system had a ‘bigger impact than expected’ on some posts.

The company added that this was an unintended side-effect and not a deliberate attempt to censor pro-Palestinian views.

At the June 10 event, Waters revealed that Zuckerberg ‘features in my new rock and roll show,’ but didn’t elaborate, saying ‘I shouldn’t tell you’.

Another Brick in the Wall (Part 2) is one of Pink Floyd’s most celebrated tracks. Released in 1979, the song and its iconic music video has become an anthem of disillusionment with authority.

Rolling Stone reported that Waters also recently hit out at former bandmate Dave Gilmour for allegedly blocking his access to the group’s social media accounts and vetoing liner notes for an upcoming boxset.