Prince Philip dies: Will Harry and Meghan return to UK after Duke of Edinburgh’s death?


Prince Harry is preparing to return to the UK for the first time since leaving Royal duties after the death of Prince Philip – but questions remain over whether Meghan will join him.

The royal will have to self-isolate for five days after returning to Britain, after which he can go out in public provided he has had negative test.

Harry’s grandfather’s death comes weeks after they gave an interview to Oprah alleging racism in the Royal Family which aired while Philip was in hospital.

The Sussexes, who faced calls to postpone the interview because Philip was unwell, accused an unnamed royal, not the Queen nor the duke, of raising concerns about how dark their son Archie’s skin tone would be before he was born.

Since then, they have launched a charity, accepted lucrative business deals with Netflix and Spotify, given public talks, appeared on Zoom conferences, and on March 7, they criticised the Royal Family in a sit-down interview with Oprah that was viewed around the world.

Meghan is now pregnant with their second child and due to give birth sometime in the summer but she has not disclosed exactly when. The couple has not commented on any plan to return to the UK.

A source close to the Sussexes told DailyMail.com: ‘Harry will absolutely do his utmost to get back to the UK and be with his family. He will want nothing more than to be there for his family, and particularly his grandmother, during this awful time.

‘Meghan is obviously pregnant so she will need to take advice from her doctors about whether it is safe for her to travel, but I think Harry will definitely go.’

Meanwhile, another source told the New York Post: ‘Harry was extremely close to his grandfather. He will, of course, be there, no matter how difficult relations are between the Sussexes and the family.’ 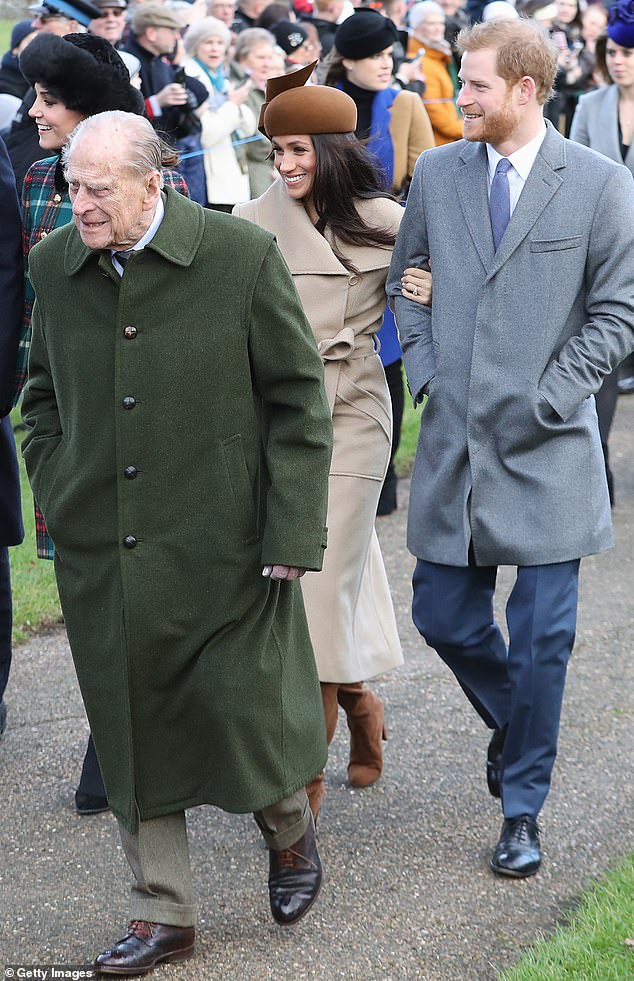 Harry, Meghan Markle and Prince Philip on Christmas Day 2017. The couple has not been in the UK since March last year 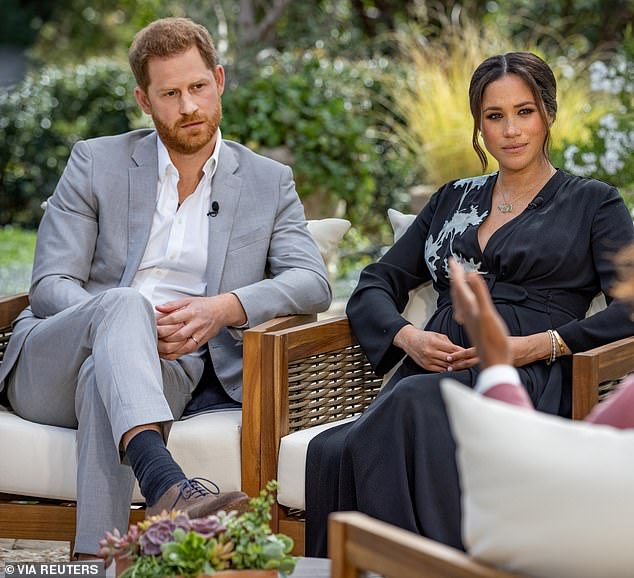 Prince Philip’s death comes just a month after Harry and Meghan gave an interview to Oprah in which they alleged racism in the Royal Family. It aired when Philip was in the hospital

Today royal biographer Angela Levin said it was ‘unlikely’ Meghan would join her husband in the UK due to her being pregnant.

According to government guidelines, people travelling to England must self-isolate from arrival into the country for 10 full days. However, arriving travellers can take a test five days after arriving in the country and – if this is negative – may leave self-isolation.

This is the most likely option for Prince Harry unless he claims special status accorded to diplomats.

What kind of reception the Sussexes will receive after their extraordinary interview and behaviour over the last year is uncertain.

The most damaging claim they made during the Oprah interview was that someone in the family made comments to Harry expressing ‘concern’ over his son Archie’s skin tone. Meghan also suggested that the concern was why Archie would not be given the title of Prince.

Harry would not reveal who in the family said it, but Oprah said after the interview aired that he assured her, off camera, it was neither the Queen nor Prince Philip.

Meghan also told of how she begged for help when she was suicidal, but said the institution gave her no support. The Queen said the issues were concerning, but that ‘some recollections may vary’ and the matter was a family one that would be dealt with privately.

Harry was due back in the UK on July 1 for the unveiling of a statue of Diana.

Royal commentators had said that he intended to be there, despite Meghan’s imminent due date, and despite the rift between him and William.

It is not clear if he planned to return in June, when Prince Philip would have turned 100, and when a Trooping of the Colour was planned.

There was enormous criticism of the fact the interview aired on CBS at a time when Prince Philip was gravely ill in the hospital. The pair filmed it weeks beforehand.

The Duke and Duchess of Sussex were seen out and about on March 7 in their £170,000 Range Rover

CBS host Gayle King, who is a close friend of Oprah, claimed afterwards that the pair had a contingency plan that if Prince Philip’s condition worsened, the interview would not have aired. It has not been confirmed by TV networks that that is the case.

The interview was sold by CBS to dozens of countries around the world, and CBS paid a reported $8million(£5.8m) for it.

The Queen said after the interview that the allegations were ‘concerning’ and that she would address them within Buckingham Palace.

While Harry claimed in the interview to have always had a good relationship with the Queen, it’s unclear what kind of relationship, if any, he now has with Prince William and his father, Prince Charles.

Meghan claimed during the interview that contrary to public reports based on palace sources, she did not make Kate, the Duchess of Cambridge, cry during the run-up to her wedding and that it was Kate who made her cry instead.

She also claimed that she’d been trapped by the ‘institution’ and was at one point suicidal but that when she sought mental health help, she was told she could not have it.

The Royal Family has not commented on those claims. 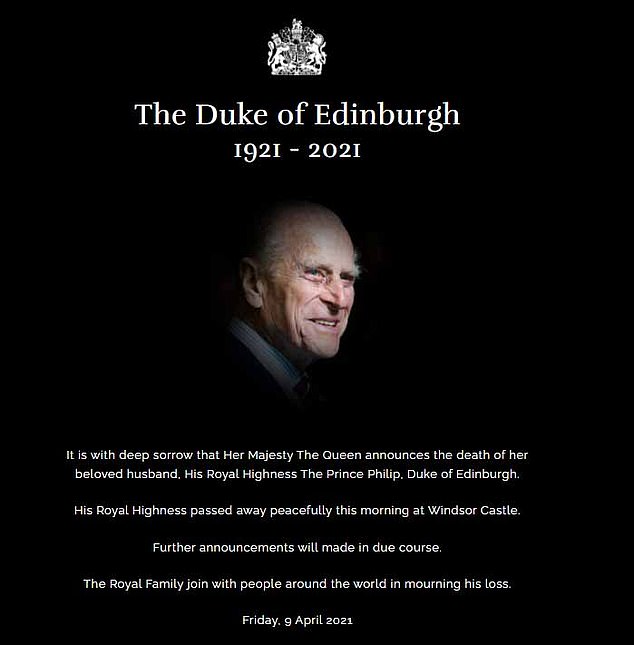 The Duke of Edinburgh spent his final days at Windsor Castle with his wife, who he lovingly called Lilibet throughout their long life together, after a 28-night stay in hospital having been admitted in mid-February for an infection and a pre-existing heart condition.

Her Majesty announced her husband’s death at midday as the Union Flag was lowered to half-mast outside Buckingham Palace and on public buildings across the UK and Commonwealth, while members of the public hugged and wiped away tears as they laid flowers in his memory – and messages of love and support for the Queen and her family.

The Royal Family said in a statement: ‘It is with deep sorrow that Her Majesty The Queen announces the death of her beloved husband, His Royal Highness The Prince Philip, Duke of Edinburgh. His Royal Highness passed away peacefully this morning at Windsor Castle. Further announcements will made in due course. The Royal Family join with people around the world in mourning his loss’.

Her Majesty, who remains at Windsor Castle, is now expected to enter an eight-day period of mourning. She will not carry out any duties, even in private, while laws will not be given the Royal Assent and affairs of state will also be paused.

As with all royal births, marriages and deaths, a notice announcing Philip’s passing was displayed outside Buckingham Palace. Mourners are already laying flowers at the palace, Sandringham, Balmoral and Windsor Castle, where he is expected to be buried in Frogmore Gardens following a small family service at St George’s Chapel.

A state funeral including a flotilla of boats on the Thames to mark his life looks impossible due to covid restrictions, but the Duke was said to have disliked the idea because he ‘didn’t want the fuss’. Details will emerge in the next few days, with the plan nicknamed ‘Operation Forth Bridge’, but the public have already been urged to stay away to avoid spreading Covid-19. 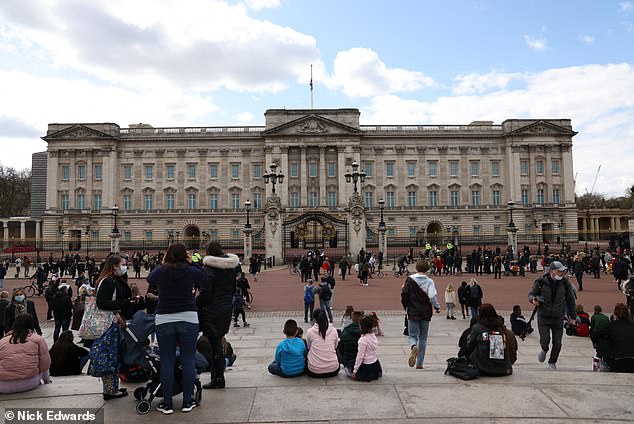 A frail Philip was last seen leaving hospital on March 16 and his death plunges the nation and the Royal Family into mourning, and brings to an end Philip’s lifetime of service to Britain and to Elizabeth, the Queen who adored him since her teens. The couple shared their 73rd wedding anniversary last November and he was due to turn 100 on June 10 this year.

He added: ‘Speaking on their golden wedding anniversary, Her Majesty said that our country owed her husband ‘a greater debt than he would ever claim or we shall ever know’ and I am sure that estimate is correct So we mourn today with Her Majesty The Queen.

‘We remember the duke for all of this and above all for his steadfast support for Her Majesty the Queen. Not just as her consort, by her side every day of her reign, but as her husband, her ‘strength and stay’, of more than 70 years.

‘And it is to Her Majesty, and her family, that our nation’s thoughts must turn today. Because they have lost not just a much-loved and highly respected public figure, but a devoted husband and a proud and loving father, grandfather and, in recent years, great-grandfather.’ Mr Johnson also praised his Duke of Edinburgh scheme, which has ‘shaped and inspired the lives of countless young people’.

Should children watch the Derek Chauvin verdict? The answer to this question and more.