Rangers suffered another late collapse against Benfica as Steven Gerrard’s side missed out on the chance to plant one foot in the Europa League‘s last 32.

Gerrard’s men looked to be on course for a famous scalp in what would have been the Ibrox club’s 150th European win after Scott Arfield and Kemar Roofe put them ahead.

But just as they did in Lisbon three weeks ago, Gers failed to hold onto their lead and were forced to settle for a 2-2 draw. 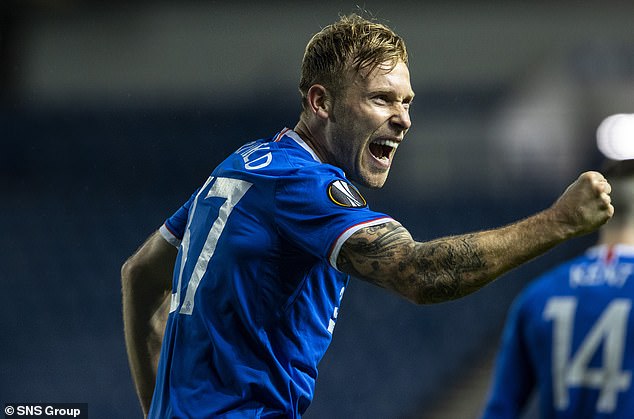 Jorge Jesus’ substitutions made the difference as Goncalo Ramos and Pizzi climbed off the bench to snatch a point for the Portuguese giants with two goals in three minutes.

Rangers needed to beat Benfica and hope Standard Liege did the same to Lech Poznan to seal their place in the knockout rounds with two games to spare.

While the Belgians held up their side of the bargain by beating the Poles, the Light Blues slipped up just as they did in the 3-3 draw at the Stadium of Light earlier this month.

However, Gerrard’s team can still clinch qualification by beating the Belgians when they visit Glasgow next Thursday. 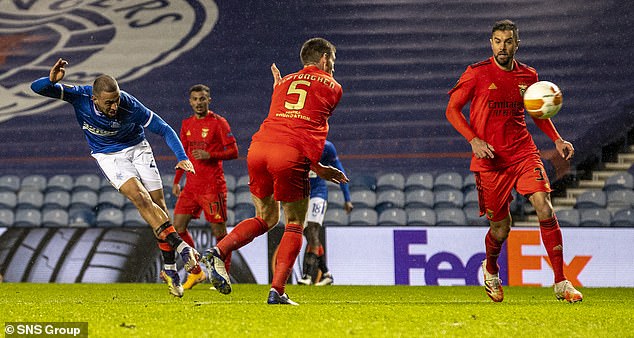 It should have been a special night for Allan McGregor as he made his 82nd European appearance for the Ibrox outfit – equalling Barry Ferguson’s club record.

Gerrard made two changes to the side which hammered Aberdeen on Sunday. Ryan Jack was expected to miss out with a knock sustained against the Dons but Joe Aribo was a surprise omission as Steven Davis and Glen Kamara returned.

But it was much different Super Eagles side to the one which faced Gers last time out as Jesus saw his preparations wrecked by both injuries and a Covid-19 outbreak.

Darwin Nunez – who rescued the Portuguese giants’ with a stoppage-time equaliser – was among those quarantining, while only Jan Vertonghen, Rafa Silva, Everton and Haris Seferovic kept their places from that Stadium of Light clash.

Gerrard’s team struck the opening blow in the seventh minute. 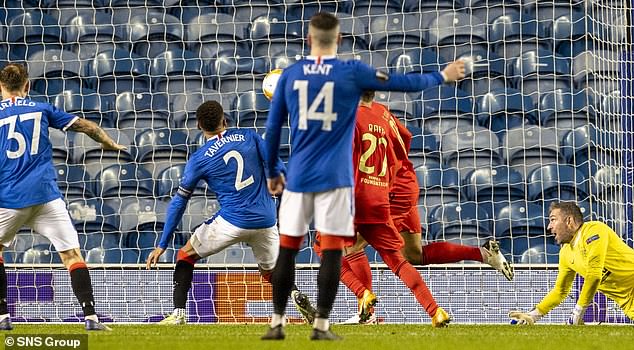 Arfield’s lovely turn in midfield put the visitors on the backfoot as he released Ryan Kent down the right. The winger bundled past Alejandro Grimaldo but his cross was behind Borna Barisic.

The chance looked to be gone but Rangers refused to give in. Barisic retrieved the ball, played a one-two with Alfredo Morelos before picking out Roofe with a pinpoint cross.

Helton Leite pulled off a wonder save to deny the striker’s header while James Tavernier headed the rebound back off the bar.

But the pin-ball sequence was finally ended when Arfield fired home through Jardel’s legs.

Everton came close for the visitors as he drove in from the left and fired over. McGregor then fired his goal-kick straight to Silva, with Barisic eventually forced to turn behind for a corner as Gers lived dangerously.

Yet Gers had seldom little else to worry before the break as the midfield trio of Davis, Kamara and Arfield kept the visitors in check. 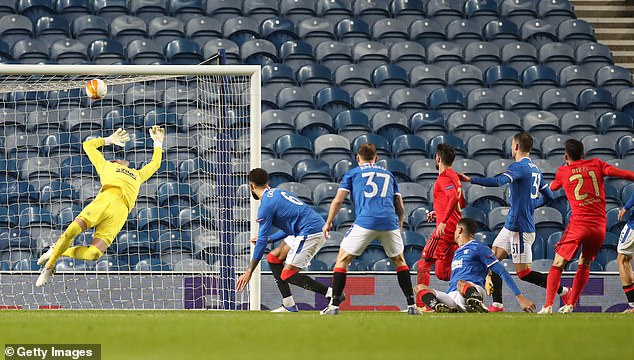 Benfica had looked so slick in the opening stages of the team’s first meeting before Nicolas Otamendi’s sending-off swung the balance.

But there was a predictable look to them for most of this clash as Rangers’ well-drilled defence sat in waiting on their chance to pinch back possession.

They thought they should have had a penalty after 63 minutes as Roofe robbed Everton before driving on to deliver a cross which struck Vertonghen’s hands but referee Radu Petrescu waved away the Gers appeals.

But Roofe was celebrating six minutes later as he rifled Rangers to within touching distance of the knockout rounds.

Barisic was again involved as he ran onto Kamara’s backheel before playing inside. The Croatian was looking for Kent as he passed inside but it ended up as Roofe’s feet and the former Leeds and Anderlecht man took full advantage as he fizzed the ball past Leite.

But Rangers were suddenly having flash backs off their late collapse in Lisbon as Benfica pulled one back after 78 minutes.

Everton beat Tavernier to a header and while Seferovic could only kick at fresh air, Ramos was on the spot to bundle home.

Morelos thought he had made the points safe as he drove forward to let loose, but Leite got lucky as he palmed the ball up into the air and watched as it bounced off the bar and clear.

And Benfica’s comeback was complete just a minute later.

Silva slotted the ball into Ramos in the box, and his clever backheel laid the ball on a plate for Pizzi to lash home, extending the race for the last 32 by another week.

The £7.5bn Black Friday: Beleaguered stores are set for a sales boost