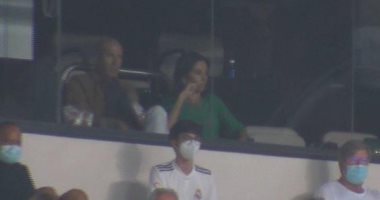 French star Zinedine Zidane, the former coach of Real Madrid, was in the stands of the “Santiago Bernabeu”, to watch the Celta Vigo match, which ended a while ago with a landslide victory for the royal with a score of 5-2, in the fourth round of the Spanish League “La Liga”. For the current season 2021-2022.

Zidane, accompanied by his wife, attended Real Madrid’s return to the “Santiago Bernabeu” stadium, after an absence of 560 days, due to the renovation work that had taken place since March 2020.

Zizou had left the Real Madrid leadership at the end of last season, and Italian Carlo Ancelotti returned to lead the team again during the current season.

And the French newcomer, Eduardo Camavinga, added the fourth goal of Al-Maringi in the 72nd minute, after he looked at a rebound from the goalkeeper.

Real against Celta Vigo.. Benzema reaches the sixth hat-trick with the Royal