Real against Celta Vigo.. Benzema reaches the sixth hat-trick with the Royal 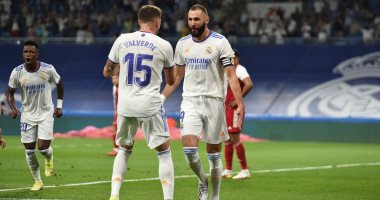 The French star Karim Benzema, the Real Madrid striker, scored 3 “hat-trick” goals against Celta Vigo, during the meeting that ended with the royal team’s 5-2 victory, and brought them together on Sunday evening, at the “Santiago Bernabeu” stadium, which the royal team returns. To play for him after an absence of 560 days, due to comprehensive renovations, in the fourth round of the La Liga competition.

Benzema reached his sixth hat-trick with Real Madrid, since Luo in the summer of 2009 from Lyon, France, in a deal worth 35 million euros.

The first hat-trick scored by the French striker in the Meringue shirt was against the French team Auxerre in the Champions League in 2010, and the second came against the Levante team in the King’s Cup in the same year, and he also scored a hat-trick against Malmo Sweden in the Champions League in 2015, and the last 3 hat-tricks In La Liga with Rayo Vallecano 2015, Athletic Bilbao 2019 and finally Celta Vigo 2021.

Real Madrid was 2-1 behind at the end of the first half of the match, and Celta Vigo was the first to score through player Santi Mina after 4 minutes of the start, taking advantage of a defensive error, and hit the ball to the right of the royal guard Courtois.

It will reduce your weight and strengthen your nerves.. Learn about 5 health benefits of cashews