Wealthy Sydneysiders have been spotted breaching lockdown rules by taking their boats out in the Northern Beaches to socialise with their mates.

About a dozen vessels were moored in The Basin, in Pittwater on Tuesday, including some boats that had sailed from outside the Northern Beaches area.

For anyone who lives outside the Northern Beaches, leisure sailing to the area is prohibited due to the Covid outbreak, with mingling threatening to spread the virus across the city.

New South Wales Health has banned outsiders from entering Pittwater by boat unless they have an essential reason.

Residents in the Northern Beaches can go out on their boats but they are restricted on how many people are permitted on the boat.

In the northern area no more than five from the same area are allowed on one boat.

In the southern area no more than 10 people are allowed on board.

Many people believe the rules around boating are a ‘grey area’, but fears have been raised that there may be dire consequences for the rest of Sydney if the rules are not cleared up soon. 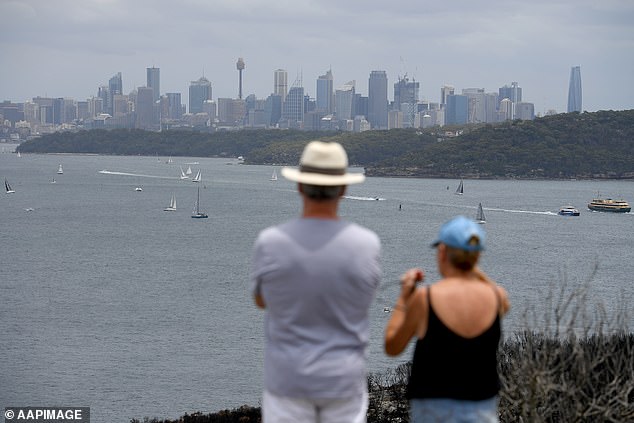 Wealthy Sydneysiders have been spotted breaching lockdown rules by taking their boats out in the Northern Beaches to socialise with their mates (pictured, the Harbour on Boxing Day) 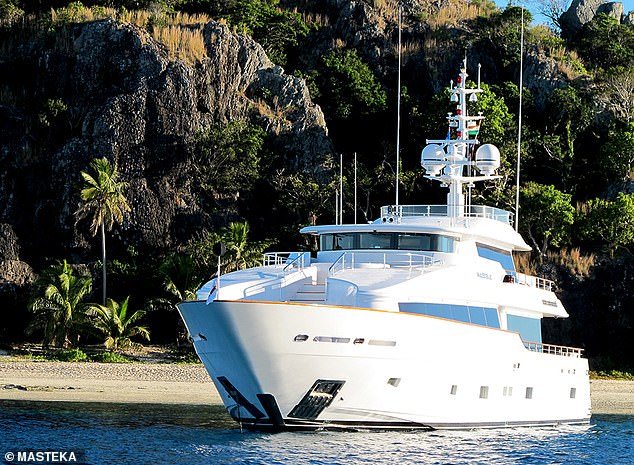 A group of four adults were seen on superyacht Masteka 2 (pictured), which charters for $100,000 a week. There was also two more adults and two children seen in the dingy

But that hasn’t stopped some residents from enjoying a day out on the water.

A group of eight people were seen relaxing on yacht The Entertainer, having travelled from Batemans Bay.

The group had planned to stay overnight before heading further north to Swansea, near Newcastle, The Australian reported.

Another four adults were seen on superyacht Masteka 2, which charters for $100,000 a week.

There were also two more adults and two children seen in the dingy.

Boat Owners Association of NSW president Chris De Jong said that while most people were wanting to abide by the rules, there were a few ‘stupid-minded, very selfish people’ flouting the restrictions.

He said some people had even been rafting up to other boats to allow more ­people on board than permitted.

Residents in the Northern Beaches were placed under stay-at-home orders on December 18 as the number of locally transmitted cases began to grow. 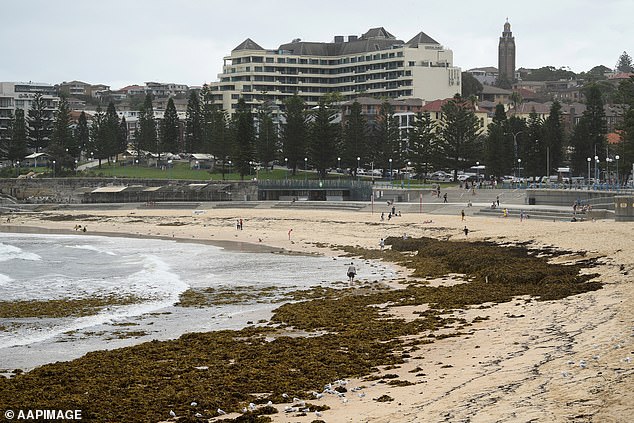 The changes come after the cluster, which was first detected in mid-December, grew to 129 cases with three new locally transmitted cases announced on Tuesday.

You can go out on a boat for recreation purposes.

Residents in the northern area of the Northern Beaches can participate in exercise or outdoor recreation, including boating, in Pittwater.

People who live outside the Northern Beaches cannot enter Pittwater by boat unless they have an essential reason.

Authorities are still battling to stamp out the virus which is threatening to spread across the city.

There were three mystery cases identified after the 8pm reporting cutoff, these will be included in Wednesday’s figures.

Of the new cases, one is from Wollongong, one is from inner-west Sydney and another is from the North Shore. They have not yet been linked to the Northern Beaches cluster.

Restrictions tightened in Greater Sydney from Monday night with public gatherings limited to 50 people, down from 100 amid fears New Year’s Eve could become a super-spreader event. Home gatherings remain limited to 10 visitors.

Thousands of firefighters, nurses and other frontline workers from across the state were due to watch the fireworks around the Harbour Bridge as a reward for their hard work during such a difficult year – but Premier Berejiklian said another time will be found to thank them.

The iconic 12-minute midnight firework display, which is normally attended by a million people and watched around the world, has been shortened to seven minutes this year to save money during the pandemic. 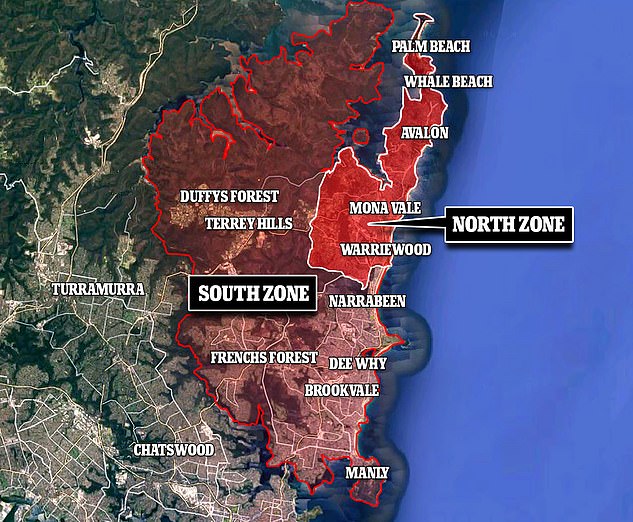 The premier has told residents to avoid the city centre, saying the decades-old tradition of camping around the harbour to secure a good view is banned.

‘We’re trying to be as generous as possible, but we don’t want to create any superspreading events on New Year’s Eve, that ruins it for everyone,’ she said.

Anyone entering the CBD will need to have a pass from Service NSW to prove they have a booking at a restaurant or are visiting a friend’s home.

The government has also ordered local councils to scrap events unless they can be seated and ticketed outside, with a record of attendees kept.

‘If you can have a barbecue or go to a park or you got an area such as a reserve, that is a safer environment than having people congregate,’ she said.

The iconic 12-minute midnight firework display (pictured last year), which is normally attended by a million people and watched around the world, has been shortened to seven minutes

‘If you have the mildest of symptoms, do not attend any of those events whether they’re indoors or outdoors.

‘The last thing you want to do is be responsible for spreading COVID to your loved ones and the broader community,’ she added.

Premier Berejiklian urged residents to avoid kissing and hugging relatives and friends outside their household.

‘When the clock ticks over to midnight from 31 December to 1 January, I know that’s normally an emotional time where we like to kiss and hug everybody around us. Can I ask for absolute restraint,’ she said.

Ms Berejiklian has urged Greater Sydney residents to get tested after 16,000 people got swabbed on Tuesday, down from 70,000 on Thursday.

She said ‘Greater Sydney must be on high alert’ until the source of the three new mystery cases is found.

‘I say that in order to encourage as many people as possible across the state, even if you live in the regions, if you have the mildest of symptoms please come forward to get tested,’ Ms Berejiklian said.

The three new mystery cases mean there have now been 13 recorded in the past four weeks, including seven in northern Sydney.

What are the restrictions for New Year’s Eve in Sydney?

• The CBD frontline worker fireworks vantage point offering is cancelled. Frontline workers will be offered another opportunity in 2021.

• Hospitality venues will remain open but must adhere to the one person per four square metres rule.

• Council events may continue but they must be controlled and seated with no mingling, and record keeping requirements must be strictly adhered to.

• A short, seven minute fireworks display will continue at midnight.

Unless you have a New Year’s Eve Pass through Service NSW, you will not be able to enter designated zones around Circular Quay, North Sydney and the City.

For the Northern Beaches peninsula zone (North of Narrabeen Bridge, and east of the Baha’i Temple), the following rules apply until January 9:

· The health situation remains volatile and the current restrictions will remain in place to supress community transmission.

· However, indoor and outdoor gatherings will be allowed for New Year’s Eve and New Year’s Day but will be restricted to five visitors in total from within your zone (and includes at homes).

· Current arrangements allowing five people to gather outdoors (not at homes) for exercise and recreation, from within the same zone, continues.

· No restaurants, cafes, pubs or clubs (except for takeaway) will be permitted to open, including for New Year’s Eve.

For the remainder (southern zone) of the Northern Beaches, the following rules apply until January 2:

· The health situation remains volatile and the current restrictions will remain in place to supress community transmission.

· However, indoor and outdoor gatherings will be allowed for New Year’s Eve and New Year’s Day but will be restricted to 10 visitors in total from within your zone (and includes at homes).

· Current arrangements allowing 10 people to gather outdoors (not at homes) for exercise and recreation, from within the same zone, continues.

· No restaurants, cafes, pubs or clubs (except for takeaway) will be permitted to open, including for New Year’s Eve.

• Gatherings in the home remain at 10 visitors in total (including children).

• Outside gatherings (such as picnics) will be restricted to 50 people in total (down from 100).

For regional NSW there is no change to current arrangements.

Guardian: The Republican leader in the Senate is blocking efforts to pass Corona relief