Florida Gov. Ron DeSantis called rumors that he would run for president in the 2024 election ‘nonsense’ amid claims Donald Trump has stepped up plans to win back the White House.

‘All the speculation about me is purely manufactured,’ DeSantis said during a press conference on Tuesday to discuss a new COVID-19 treatment unit in St. Cloud, Florida.

‘I just do my job. You know, we work hard. Obviously, our state has led on a lot of things including this and now other states are copying us. But that’s what it’s really all about, just helping folks here.’

He added: ‘I hear all this stuff and honestly it’s nonsense. So, you know, I really don’t know what to say to those rumors.’ 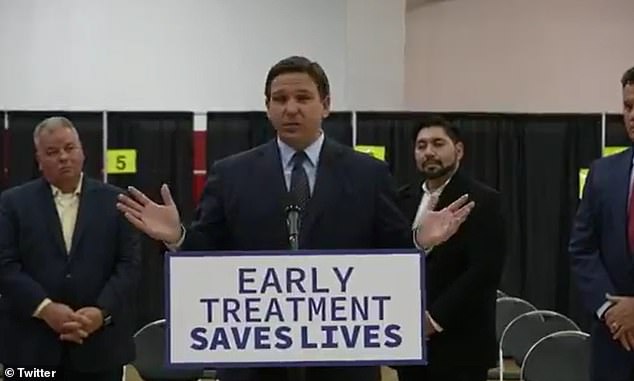 Florida Gov. Ron DeSantis called rumors that he would run for president in the 2024 election ‘nonsense’ amid claims Donald Trump has stepped up plans to win back the White House

DeSantis, who has not yet filed his application to run for re-election as governor with the Florida Division of Elections, has often been speculated as a Republican contender for the 2024 presidential election.

The governor is scheduled to attend the fifth annual Nebraska Steak Fry, an event to ‘celebrate’ agriculture held by Gov. Pete Ricketts, on Sunday at Arbor Lodge Historical Park in Nebraska City.

News outlets have described the event as being headlined by ‘other potential 2024 candidates,’ noting that former Vice President Mike Pence and Sen. Ted Cruz – who previously unsuccessfully ran for president – will also speak at the steak fry.

Meanwhile, DeSantis has appeared to fuel such speculation by traveling to states around the country to fundraise for his political committee – while avoiding early primary states such as Iowa and New Hampshire that could hinder election plans.

He has often tied himself to Trump, attending events and fundraisers at his Mar-a-Lago club, since the former president endorsed his 2018 campaign for governor ahead of the Republican primary.

Trump even appeared to suggest in April that he would consider DeSantis as his vice president if he were to run again for a second term, Politico reported. He has not yet said if he will once again run after losing the 2020 election to President Joe Biden.

However, his advisors are talking up his growing interest in a bid to recapture the White House – now that Biden’s approval ratings are experiencing a drop after the controversial pullout from Afghanistan and spiking coronavirus cases.

‘I had a good conversation with him last night. I’m going to go see him in another couple days here.’

Florida Rep. Matt Gaetz, a firm Trump ally, has said that Trump was not in a hurry to announce because ‘the base is rightly loyal to him. And a good rule in politics is to be a candidate for as short a time as necessary.’

Another Trump loyalist, Rep. Jim Jordan – who spoke to Trump the day of the deadly Capitol riot on January 6 – was captured on video last week saying ‘I know so’ when asked if Trump would run again.

‘I talked to him yesterday. He’s about ready to announce after all of this craziness in Afghanistan,’ Jordan said.

Meanwhile, Politico reported that DeSantis plans to make more appearances in his own state this fall after a recent poll showed his approval ratings tank.

DeSantis had simultaneously encouraged people to get vaccinated angering many conservatives while opposing mask mandates, angering many liberals.