Scotland maintained their 100% start to Women’s Euro 2022 qualifying by brushing aside Albania at Tynecastle.

Shelley Kerr’s side were dominant throughout and took the lead thanks to a header from captain Rachel Corsie.

A double from Caroline Weir in the second half made sure of the points that, in truth, never looked in doubt.

Scotland move back into second in Group E with three wins from three, a point behind leaders Finland who they face in Helsinki on Tuesday.

Cyprus lost 3-0 to Portugal earlier in the day.

It has been a phenomenal start to the campaign for Scotland, who came into this meeting at Tynecastle having scored 13 goals in two games without conceding. The story was rather different for Albania, who had garnered just three points from five games.

Despite having not played since March, there was little rustiness from Kerr’s team who started confidently. The ball was never far away from the Albania box and Jane Ross went through on goal in the opening moments but 17-year-old debutant keeper Antigona Hyska got down low to divert her away from goal.

Cuthbert also threatened, her volley from the edge of the box skidding off the top of the bar, while Corsie was flagged for offside as she turned in a Rachael Boyle cross at the back post.

However, the 31-year-old was not to be denied her 17th goal for her country. A pinpoint delivery from a Weir free-kick found her unmarked at the front post. The defender showed terrific predatory instincts with a glancing header which had Hyska easily beaten.

Cuthbert glanced a header wide just before the break, while the pressure continued to pile on the visitors’ box following the interval. However, it took until the 75th minute before they would finally be breached again.

A lay off from Cuthbert into the path of Weir was struck well by the Manchester City forward, but a big deflection off Albina Rrahmani made sure it found the net.

And Weir would grab her second before the game was out. Kirsty Hanson was chopped down in the box with the City stiker sending Hyska the wrong way from the spot. 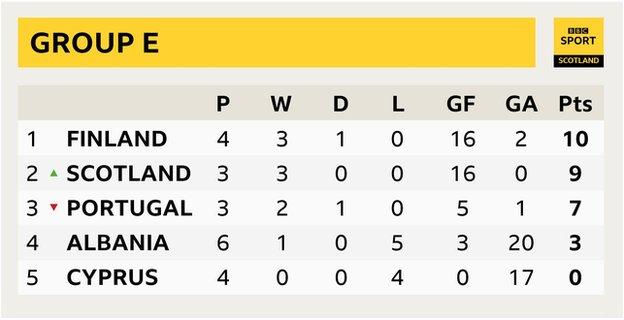 Player of the match – Caroline Weir

Kerr’s side travel to Finland to take on the group leaders on Tuesday (16:15 GMT kick-off).