Backseat footage captured the moment a self-driving taxi went rogue and drove away from technicians who arrived to help after it got stuck.

YouTuber Joel Johnson – whose channel ‘JJ Ricks Studio’ shares clips of his Waymo autonomous taxi rides in Chandler, Arizona – captured the entire incident that started when the the self-driving van got confused and by traffic cones.

The ride, shared by Johnson last Wednesday, started out normally – until 12 minutes in, when the self-driving Chrysler van tried to turn into a street, only to find one lane closed.

Confused by the unexpected blockage, the van stopped, and specialist roadside assistance was called out to help.

But before they could arrive, the van momentarily came back to life and completed its turn – only to stop again abruptly, causing a partial-traffic blockage.

‘I don’t think it was supposed to do that,’ Johnson nervously tells a remote operator. ‘Oh no, now it’s blocking the entire road.’ 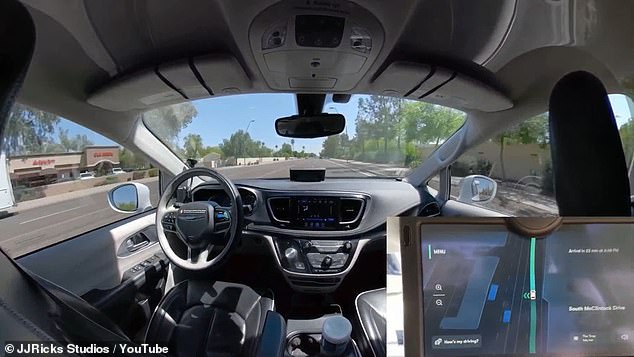 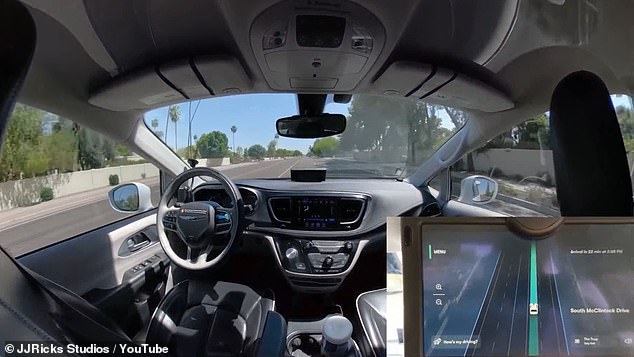 After the construction cones are removed the van then reversed several feet, meaning it was blocking the entire lane.

Johnson was filmed talking to a construction man who is asking him if he can move the car as other drivers are honking at the vehicle.

Johnson tells him roadside assistance should be there any moment when the car starts moving and appears to almost collide with a passing vehicle.

The car continues driving before roadside assistance can arrive.

Johnson has a sense of humor about the confusions and says ‘this has been a very fun turn of events.’

The car then gets stuck again and roadside assistance is called once more and finally arrives but when they reach the car, the steering wheel turns sharply and Johnson tells the operator, ‘you better hurry up its gonna escape,’ as the taxi takes off.

The car abruptly stops and assistance is able to reach the vehicle and the saga ends.

‘What a sweet video this is gonna be, woo hoo!’ Johnson says laughing during his ride. 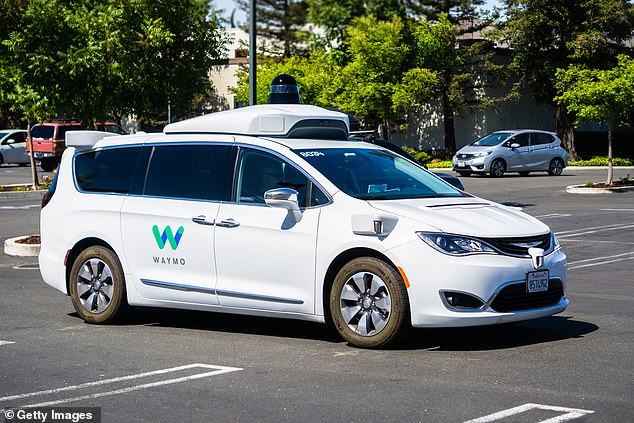 Waymo currently owns 600 vehicles in its entire fleet with more than 300 vehicles operating in Arizona, The Verge reported.

For it’s self driving vehicles, Waymo has a team of remote employees that monitor live footage on the vehicles and are able to help if the software needs human assistance.

But the company claims that the remote assistance team can’t “joystick” the vehicles, only offer suggestions to help extract the car from tough situations, The Verge reported.

The car company says that the incident Johnson captured was caused by a mistake made by a remote Fleet Response specialist.

‘During that interaction the Fleet Response team provided incorrect guidance, which made it challenging for the Waymo Driver to resume its intended route, and required Waymo’s Roadside Assistance team to complete the trip,’ Waymo said in a statement.

‘While the situation was not ideal, the Waymo Driver operated the vehicle safely until Roadside Assistance arrived. Throughout, Waymo’s team was in touch with the rider, who provided thoughtful and helpful feedback that allows us to continue learning and improving the Waymo Driver. Our team has already assessed the event and improved our operational process.’ the statement added.

In September 2020, an Arizona woman was killed when she was hit by a self-driving Uber whose safety driver was distracted watching an episode of the television show The Voice.

he accident was the first death on record involving a self-driving car, and resulted in Uber ending its testing of the technology in Arizona, BBC reported.