A selfless single man has recently adopted his sixth child after devoting his life to helping children in need.

Single dad, Ben Carpenter, 37, from Huddersfield, has recently adopted his sixth child after dedicating his life to helping children, having adopted his first child at the age of 21.

Ben became the youngest gay man to adopt when he took on his first child at the young at of 21, and has since adopted another five children with special needs over the years after setting out on a mission to help the most vulnerable of children.

Jack, now 14-years-old, has autism and was Ben’s first child. He also has Ruby, 11, who has complex needs, Lily, nine, who is profoundly deaf, and Joseph, aged six, who has Down’s syndrome. 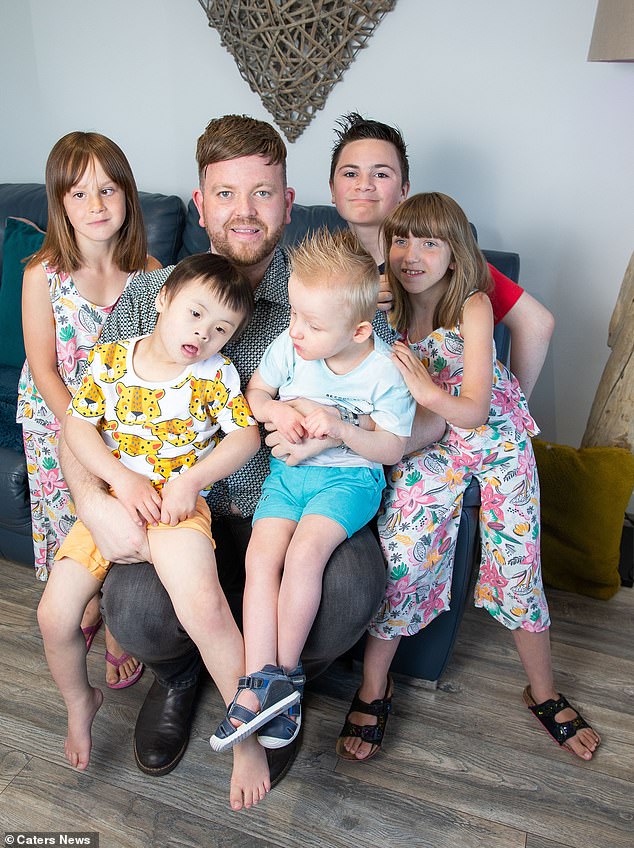 Single dad, Ben Carpenter, 37, from Huddersfield, has recently adopted his sixth child after dedicating his life to helping children after adopting his first child at the age of 21. Pictured left to right: Lily, who is deaf, Joseph, who has Down’s Syndrome, Ben, 37, Louis aged two, Jack, 14, who has autism and Ruby, who had complex needs 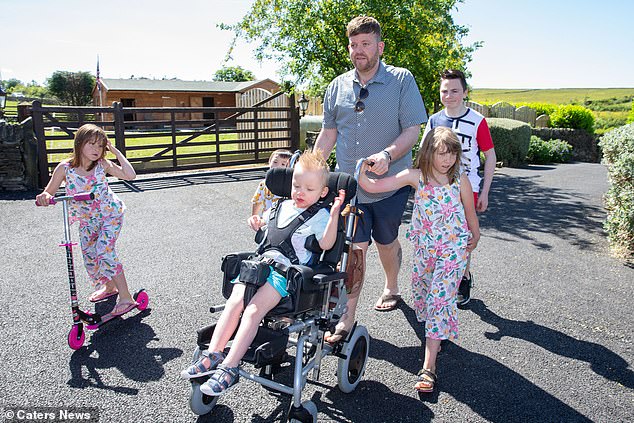 The family on a day out. Ben, who is single and gay, said he wanted to dedicated his life to help vulnerable children

Ben’s fifth adoptive child was Teddy, who sadly passed away in November 2019. Although Teddy had a rare genetic disorder called Cornelia de Lange syndrome, he passed away from sepsis and not as a result of his complex needs.

The doting dad then took a break from adoption to allow himself the time to grieve the devastating death of his son before adopting for the sixth time last year.

In April 2020, Ben brought home his sixth and most recent adopted child, Louis, now two-years-old, who has cerebral palsy and is blind.

Ben, who worked in the care sector before setting out on his adoption journey, says that he always knew he wanted to have a family but not necessarily be a biological dad. 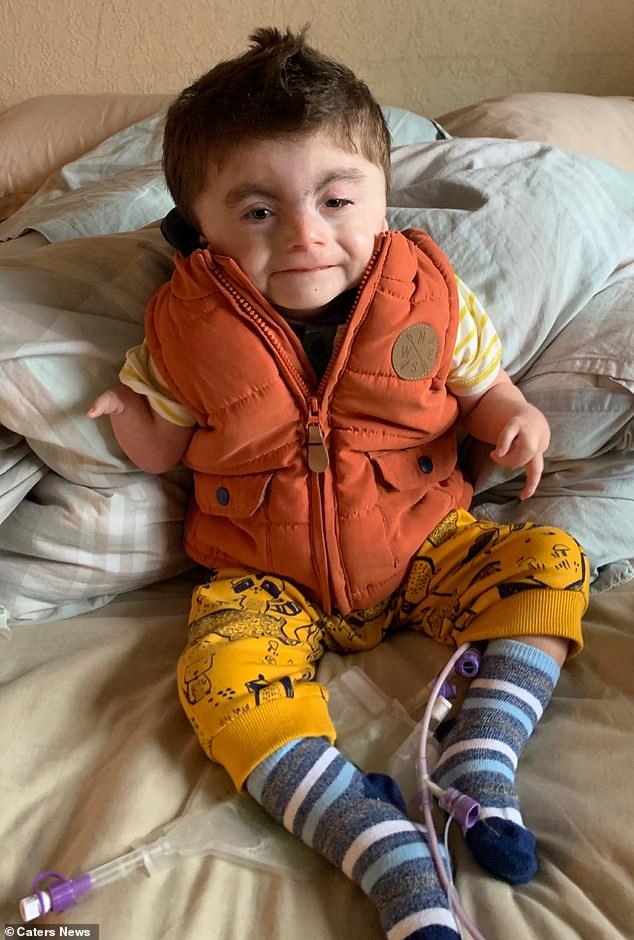 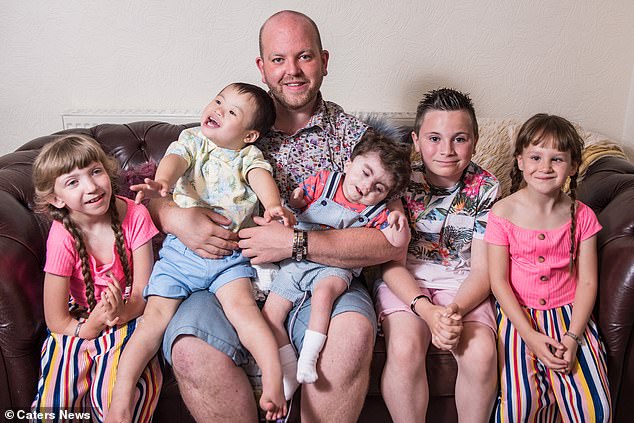 Ben pictured with his family and Teddy, centre right, before he passed away in 2019. Ben took a break from adoption to grief 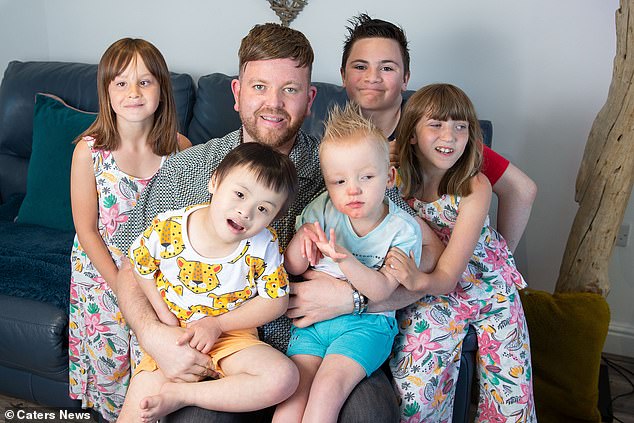 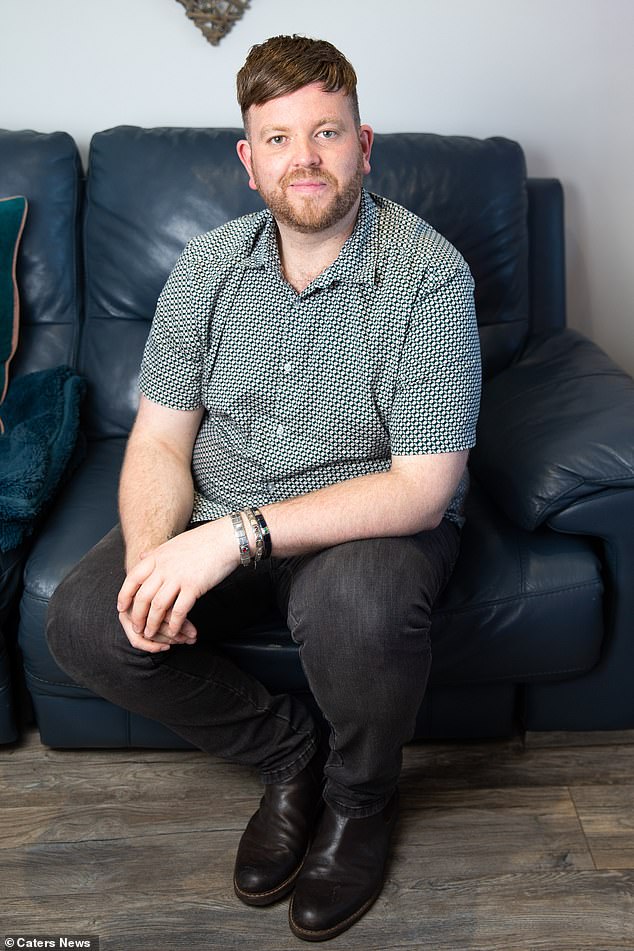 Ben, pictured now started adopting aged 21, and said he felt he wanted to prove he was mature enough to take care of a baby

Cornelia de Lange Syndrome: the rare genetic mutation that affects 1 in 10,000 to 30,000 newborns a year

Cornelia de Lange Syndrome  is a rare genetic disorder and developmental disorder that affects many parts of the body.

The symptoms of the conditions vary from one person to the other, but people who were born with it have distinct facial features.

There are several symptoms of the conditions, which have different degrees of severity.

– Slowed growth before and after birth

– Skeletal abnormalities of the arms and hands

The condition is caused by a mutation of the NIPBL gene  and the condition can be passed on to children, but 99 per cent of the cases occur due to new mutations.

Life expectancy is normal for people with Cornelia de Lange and most affected children live well into adulthood.

However, people with more severe symptoms can see their life expectancy decrease.

Treatment is performed by professionals because they have a lot of symptoms to treat.

He added: ‘I’ve always known what I wanted. I never wanted to become a biological dad because being a parent is so much more than that.

‘I wanted to help kids that were the most vulnerable and the ones that were most in need of a loving and caring home.

‘I had a lot to prove at such a young age. I needed to show that I was mature enough and could offer these kids what they needed.

‘The good thing about adoption that you can’t do in pregnancy is picking the gender of the child.

‘So to begin with I chose a boy and then a girl because I thought that would be the perfect set up and luckily got accepted and matching with my son and daughter, Jack and Ruby.

‘I was then asked if I would take my biological daughter’s sister which I agreed to do.

‘So I had two girls and one boy and I thought I should even it out again and adopt another son.

‘So I applied for a boy with Down Syndrome and within three days I was matched to a baby boy who had just been born with the condition.’

A few years later, Ben had been reading a magazine article which is how he came across the next boy that would join his family.

He says that he read about a severely disabled boy, Teddy, who was in desperate need of a family and got in touch because he thought he could help.

Ben added: ‘There were lots of conversations and visits and it was agreed that we would be a lovely match and the adoption was approved.

‘I then had my five kids and I was so happy. They were all doing amazing.

‘However in 2019, Teddy tragically passed away as a result of sepsis.

‘I was devastated and I felt guilty for a while because I kept wondering if there was something I could have done to fix it.

‘Before Teddy passed away, I had been contacted to see if I would consider another child. It was a little boy with server brain issues.

‘I had said yes, but when Teddy passed I needed to put the process on hold to allow myself to grieve. 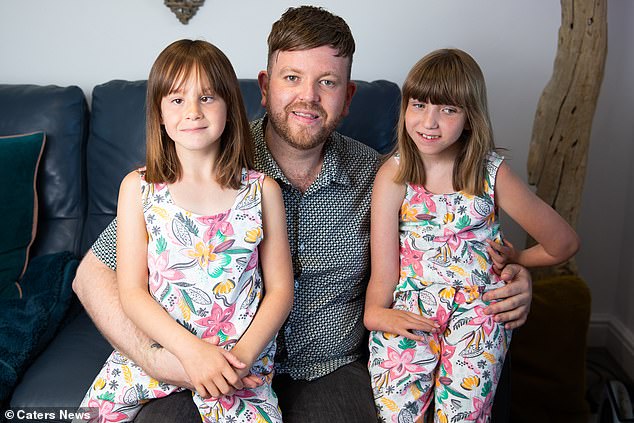 Ben pictured with his two daughters Lily and Ruby, who both has special needs and who are respectively 11 and nine. Ruby is his sister’s daughter 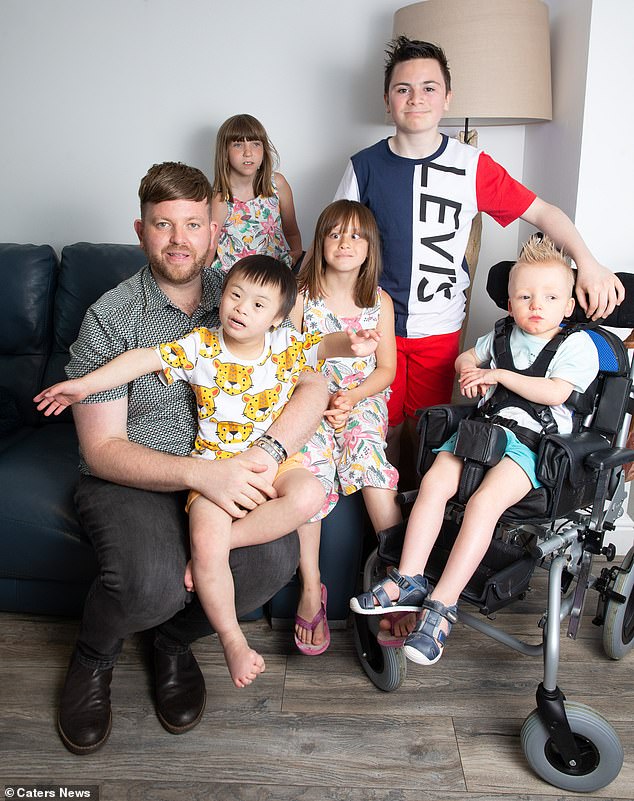 Ben with his adopted brood. The father-of-five said he was proud of how supportive his children were of each other 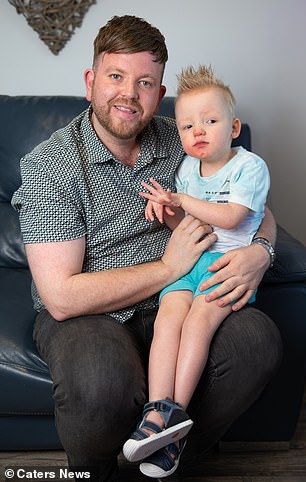 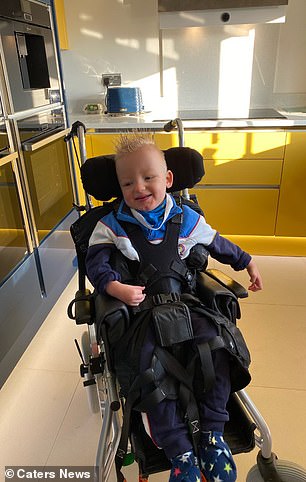 Ben, left, pictured with his son Louis, whom he adopted in April 2020 and who needs an electric wheelchair to move around 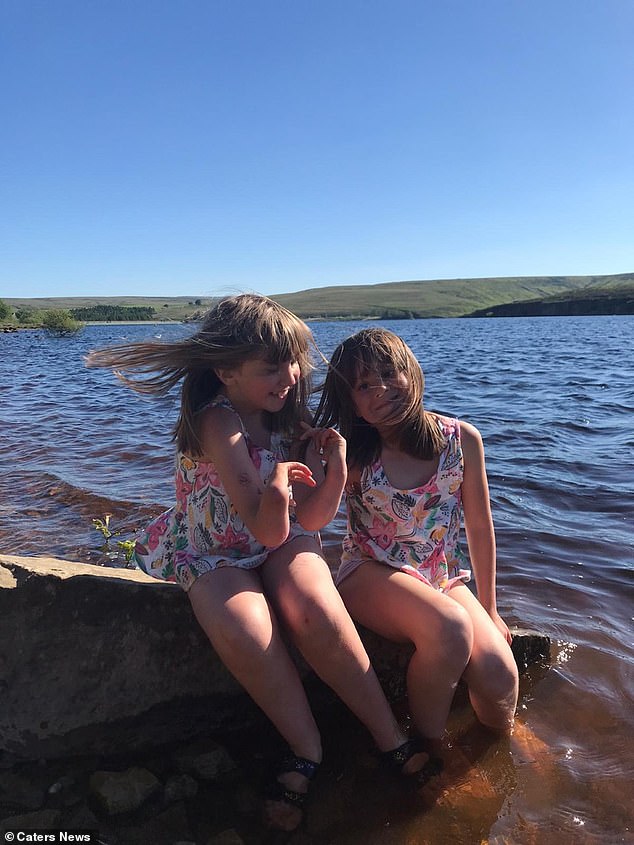 Lily and Ruby, pictured on a family holiday, are thick as thieves. Ben said his children changed his life as much as he changed theirs

‘In early 2020 I realised that this little boy also needed me and I could be his last option so I called the social worker and started the process again.

‘In April 2020, Louis came home to be with us and has gone from strength to strength ever since.’

Ben says that all of his children have amazing sibling relationships and that his house is full of love and joy, which has allowed them to flourish.

He added: ‘I had always dreamed about having a big family and I am so happy that my kids are a part of it and that they have so many siblings.

‘I often sit and imagine them all at each other’s weddings. 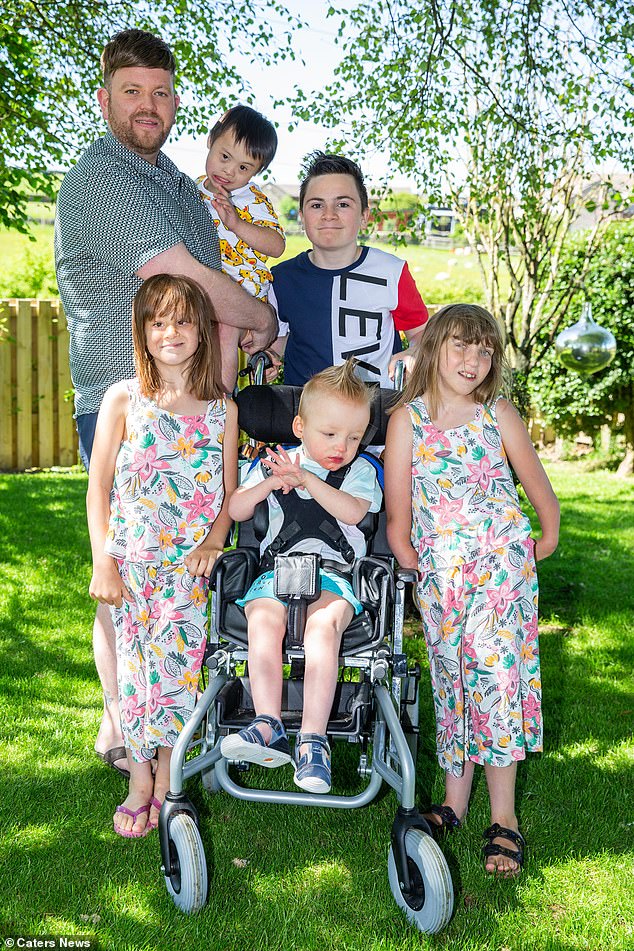 Ben, pictured with Joseph, Jack, Lily, Louis and Ruby this summer. The proud father of five wanted to help the children with special needs 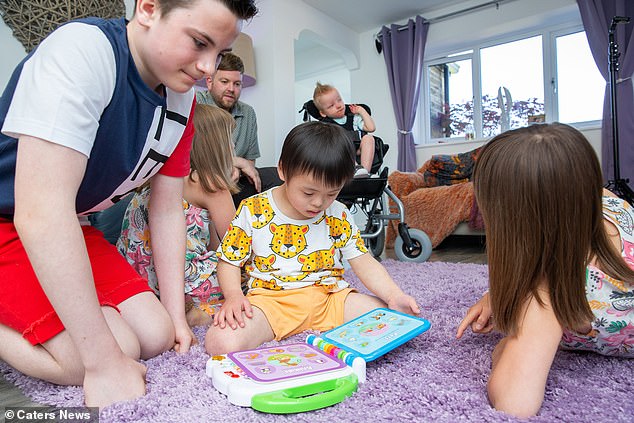 Pictured: Jack playing with Jopseh and one of the girls during family playtime. Ben is raising money to create a sensory room to support his children’s needs 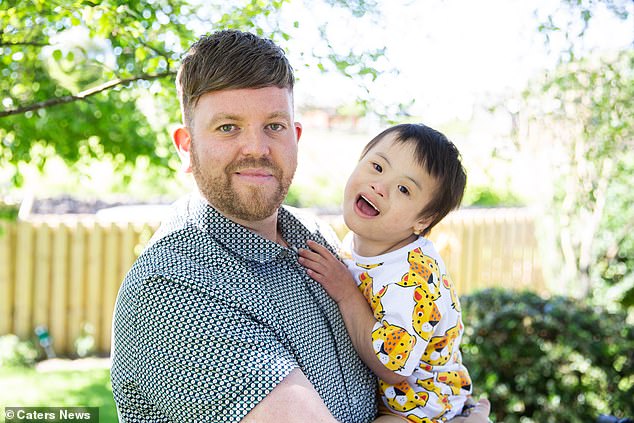 Proud father Ben with his son Joseph, who lives with Down’s Syndrome. They were watched just a few days after Ben applied for adoption again 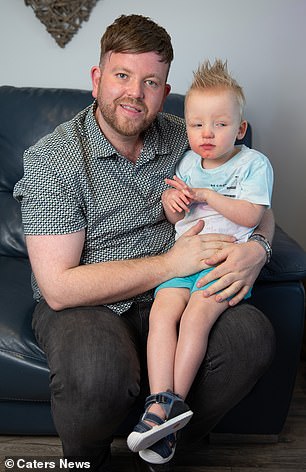 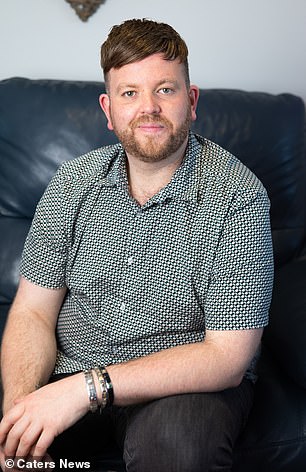 Ben, realised in 2020 he was Louis’s last option, and said his house was full of love and joy and that it allowed the children to flourish

‘They are all so supportive of each other’s needs and I am so proud that I have created a happy, loving and stable environment for them to grow up in.

‘As much as I have changed their life, they have also changed mine.

‘And I would never say never to having another child.’

Ben is raising money to create a sensory room to support his children’s needs, you can donate here. 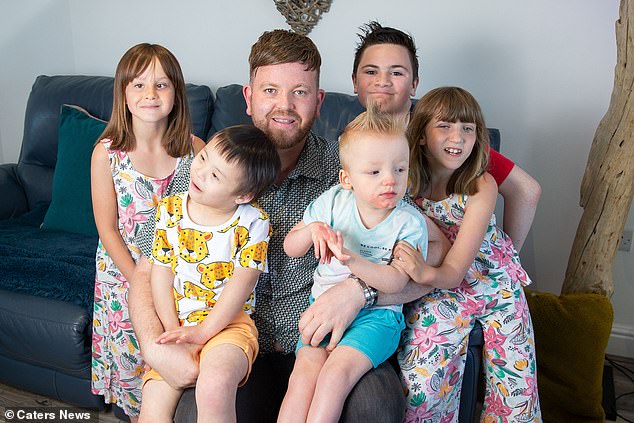 Lil, Joseph, Ben, Louis, Jack and Ruby are one happy family. The dad-of-five said he will never say never to having another child 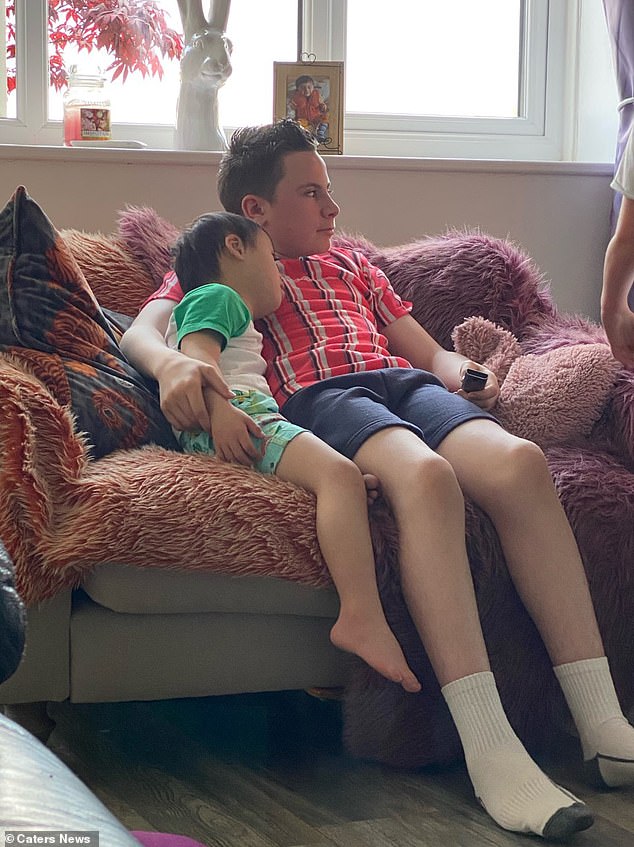 Ben said his children act like siblings and show each other affection. Pictured: Jack, who has Autism, with Joseph, who had Down’s Syndrome 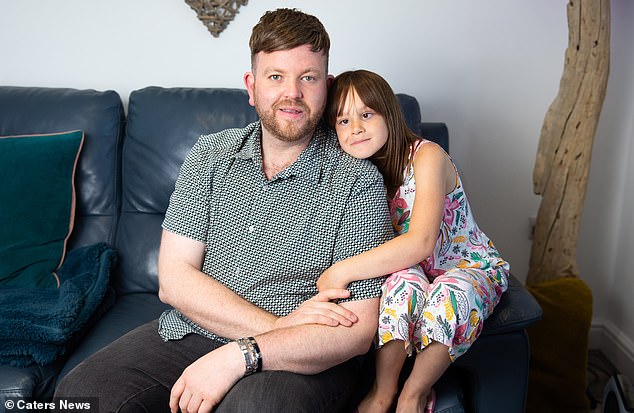 Ben with Lily, 11, who was the first girl he adopted after he adopted his first son Jack, 14, when he was 21 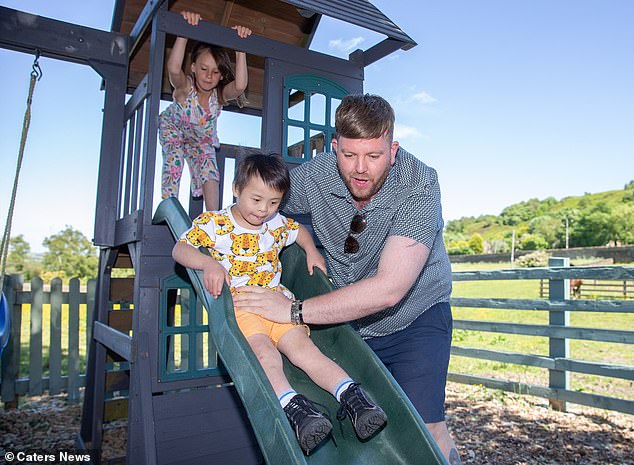 Playtime! Ben guiding Joseph down a slide at the playground with Ruby waiting for her turn next 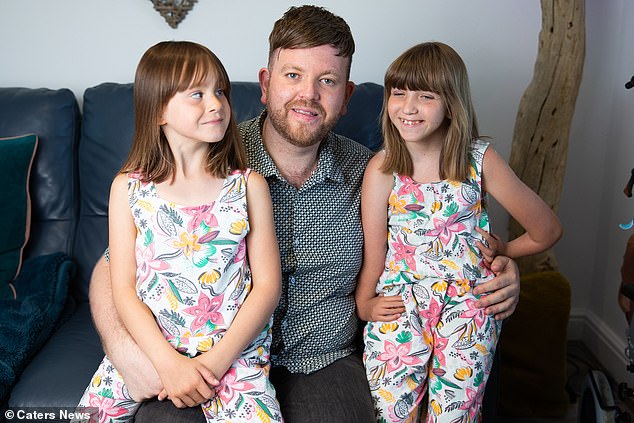 Ben with Lily and Ruby at home. The father said he was proud to have created a happy, loving and stable environment for them to grow up in 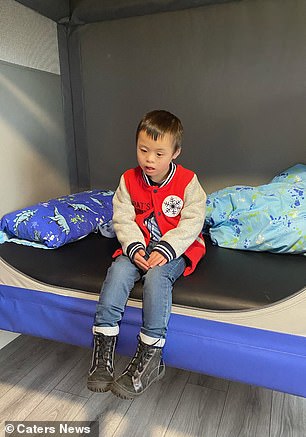 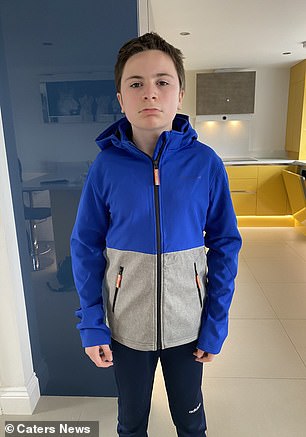 Ben’s boys! Pictured left: Joseph and right, Jack, where the first two boys Ben adopted, with Jack becoming his first child when he was 21 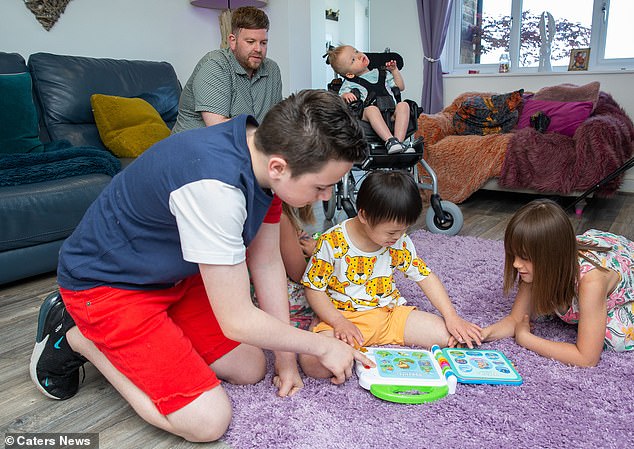 Jack, Joseph and Ruby during family playtime. Ben said he had always wanted a big family, but not a biological one 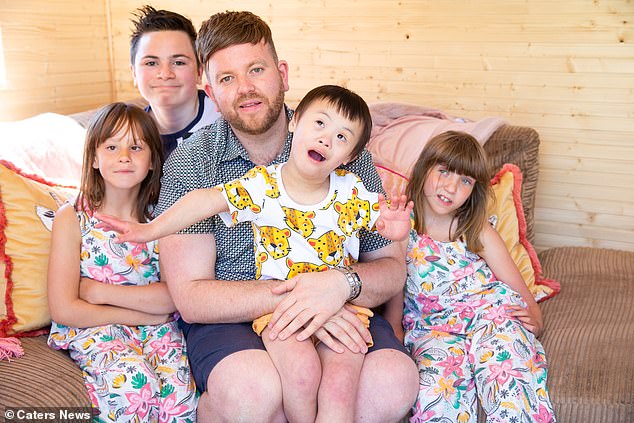 Ben said there was much more to parenting than being a biological parent, and he proved that with his loving family, looking after Lily, Jack, Joseph and Ruby