The two surviving Dionne Quintuplets, who were taken from their mother as babies to be put in a tourist attraction called Quintland, have celebrated their 87th birthday.

Annette and Cecile were born in 1934 along with three sisters Yvonne, Emilie and Marie. Their mother was just 25 at the time.

Not long after their birth, the girls were torn from from their parents and placed in to the care of doctors and nurses in Ontario, Canada.

They were returned to their biological parents when they were nine and subjected to years of sexual abuse by their father and torment from his five other children.

In 1998, Cecile and her sisters Annette and Yvonne, were awarded a settlement from the government of Ontario in compensation for their circus-like upbringing.

The girls’ mother and father already had five kids when they were born. It was highly unusual for quintuplets to be born at the time, much less to survive. All five girls were taken to become a tourist attraction. 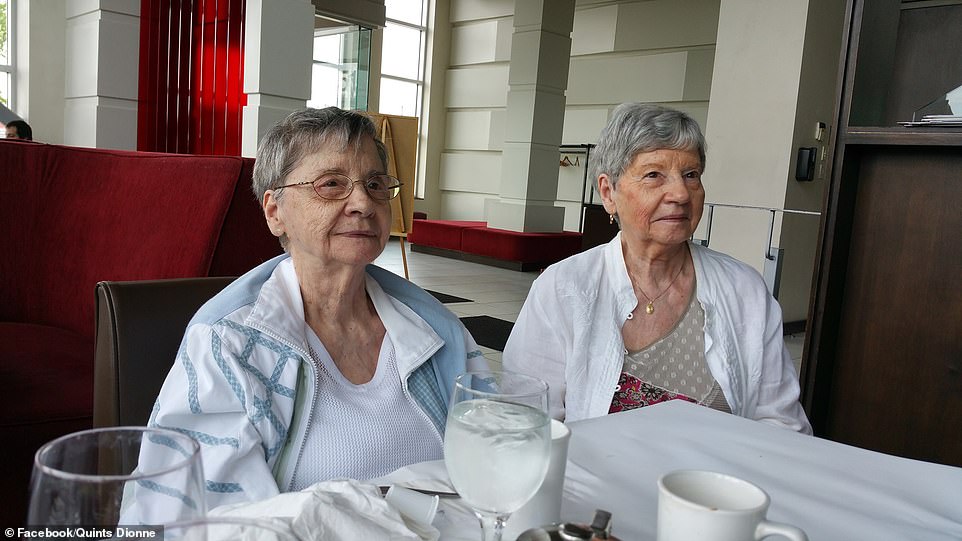 Annette and Cecile were born in 1934 along with three sisters Yvonne, Emilie and Marie. Their mother was just 25 at the time. 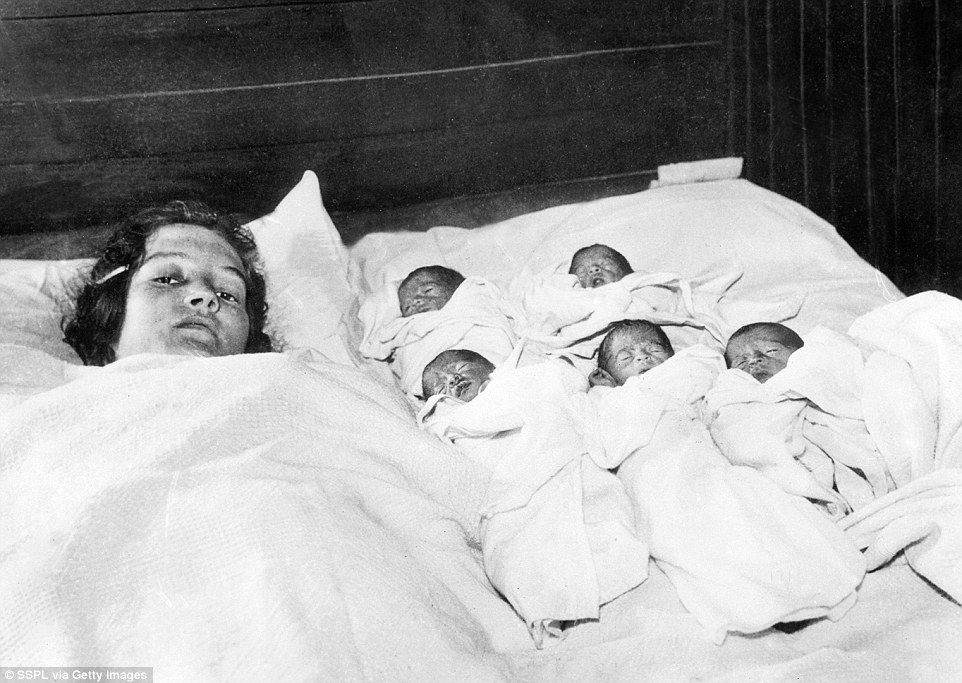 The Dionne sisters were born on May 28, 1934. Their mother, Elzire, was 25 at the time. They are seen shortly afterwards, wrapped in owels 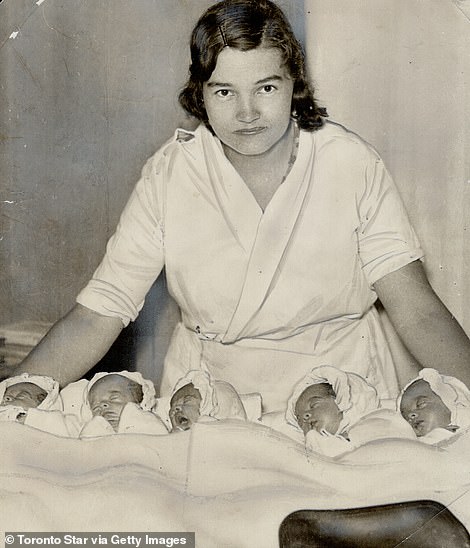 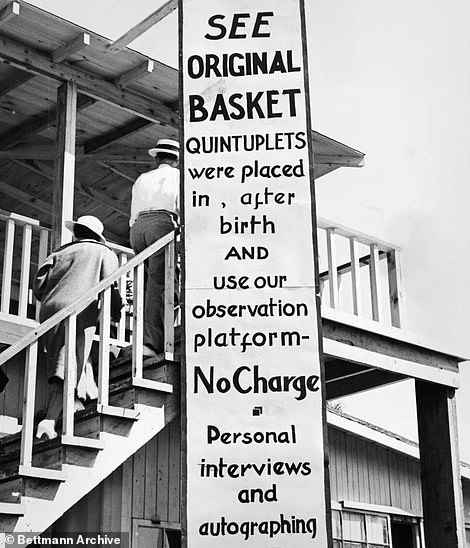 Not long after their birth, the girls were torn from from their parents and placed in to the care of doctors and nurses in Ontario, Canada. 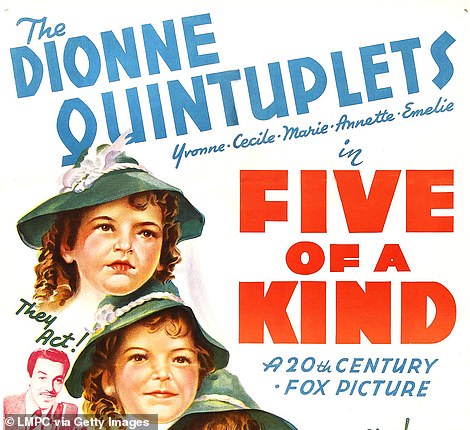 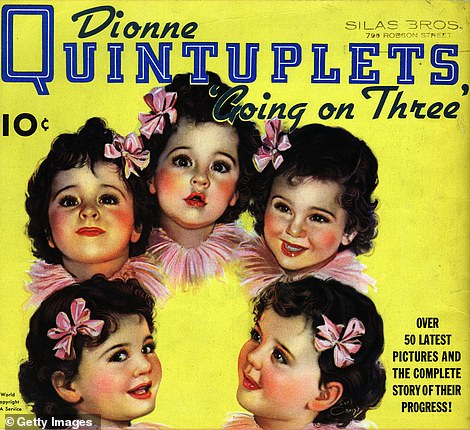 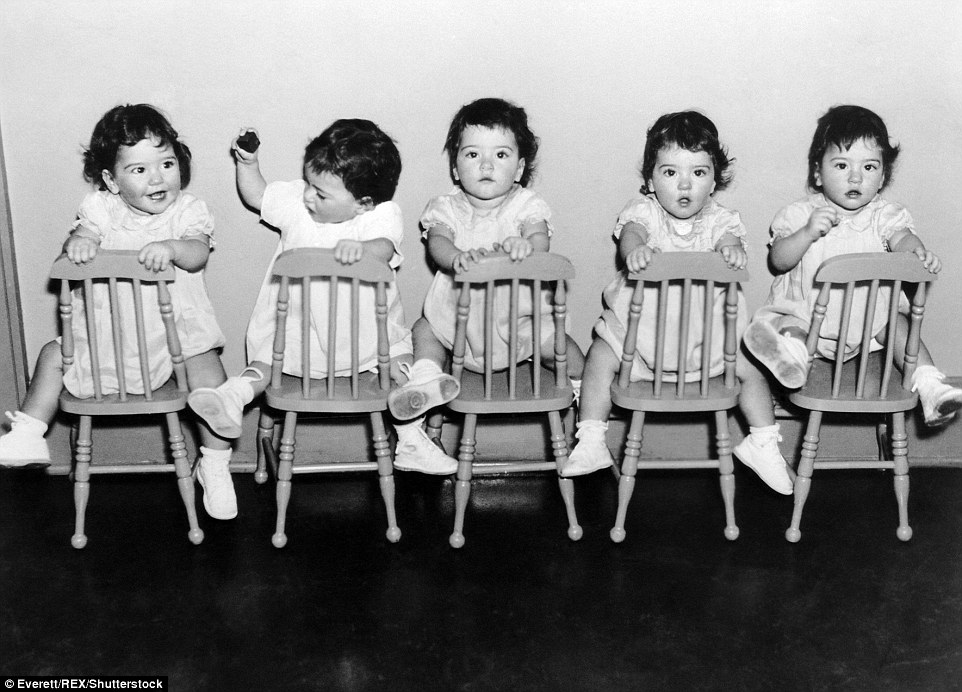 The girls were moved into the Dafoe Hospital and Nursery when they were four. They are seen above in 1936, aged two 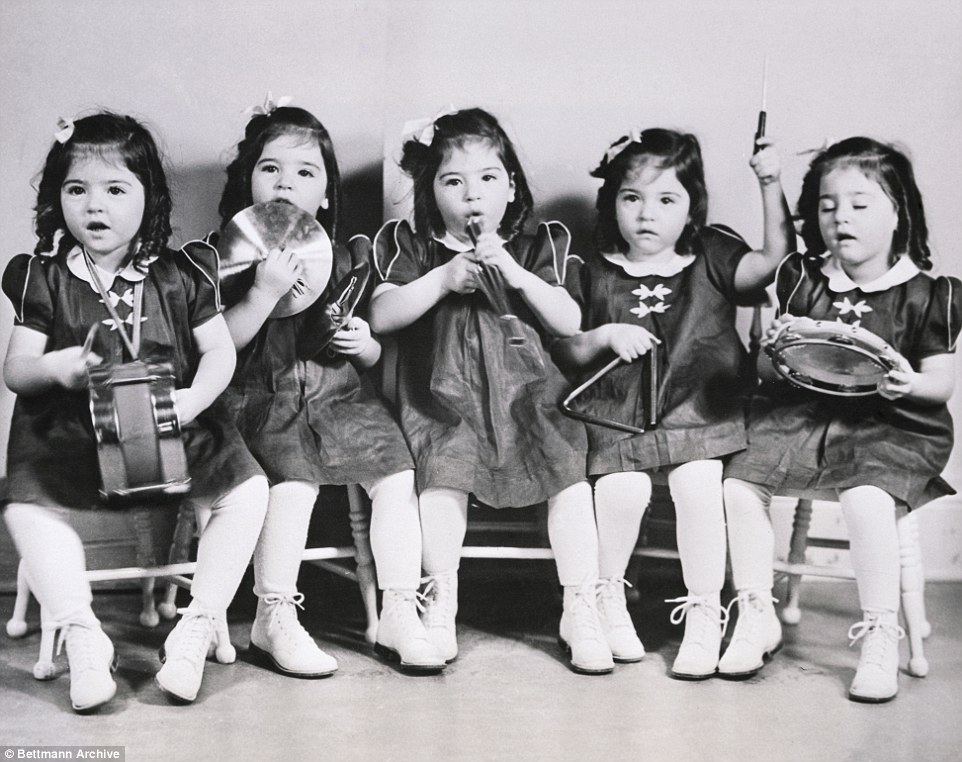 In a seasonal photograph to ring in the New Year during their time at the nursery. From left to right: Annette, Yvonne, Emilie, Cecile and Marie

They were returned to their family aged 9 and all five girls lived until they were adults but they suffered years of abuse at their father’s hands. 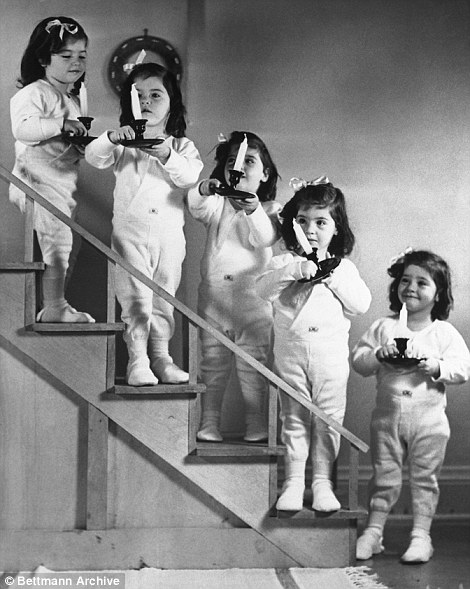 The girls, at the age of four, are pictured in their pajamas on Christmas Eve holding candles

A Facebook page has been set up in their honor.

The organizers share a birthday message to them every year, and also share updates on the Dionne Quintuplets Museum

Despite their parents’ protestations and the state’s brutal exploitation of them, Cecile said they were happy in the care of the nurses and doctors who looked after them at Dafoe Hospital and Nursery, their purpose-built asylum that became known as Quintland.

‘Contrary to what people think, it wasn’t bad there.

‘We were young and care-free,’ Cecile said in a rare interview in 2016 with the Montreal Gazette.

The girls’ father, Oliva, fought tirelessly to have them returned to his care and in 1943, when they were nine, he succeeded.

He had been running a souvenir shop next to Quintland while they lived there. Thousands flocked to watched the girls as they played outdoors.

When they returned to their biological family, the girls were treated terribly.

‘Nine is not an appropriate age to be adopted. We weren’t prepared and neither was the family.’

They were picked on by their other siblings, who had been turned against them by their parents, and sexually abused by their father.

The mansion they moved into was paid for with money they had earned, but were unaware of, at the nursery and they continued to be paraded across the country by their parents to perform.

Heartbreakingly, Cecile told how in the deep depression of her adolescence, when she was still being treated as a tourist attraction, she longed to have her own children to care for.

‘I realized when I was very young that I wasn’t happy. I always wanted to have a girl, like me,’ she said. 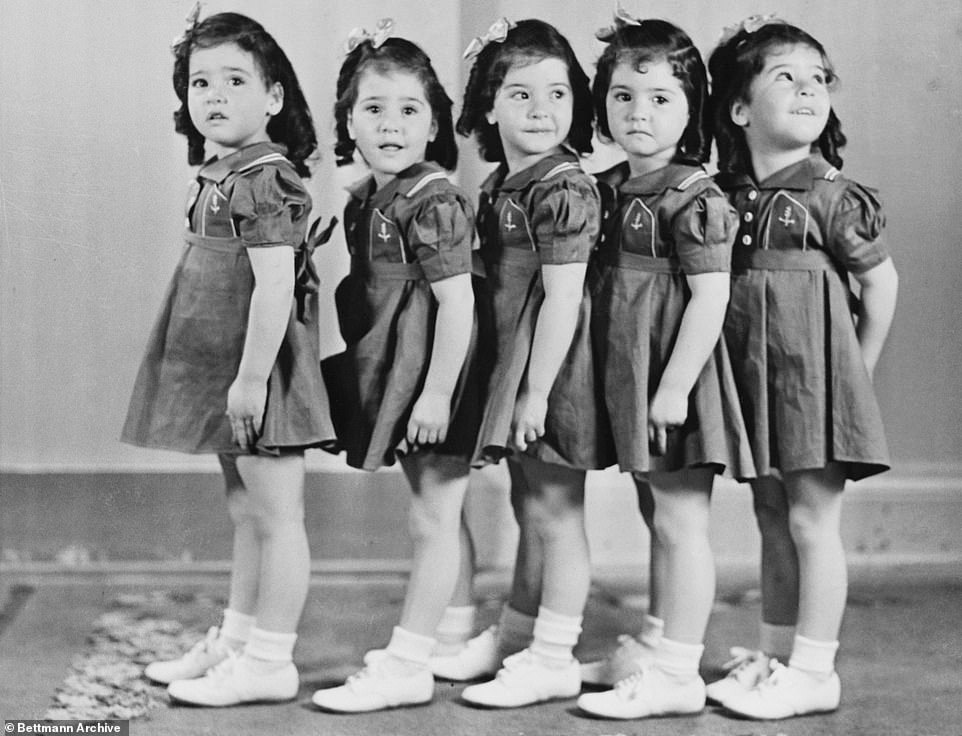 ‘Contrary to what people think, it wasn’t bad there. ‘We were young and care-free,’ Cecile said in a rare interview in 2016 with the Montreal Gazette about their time under state care 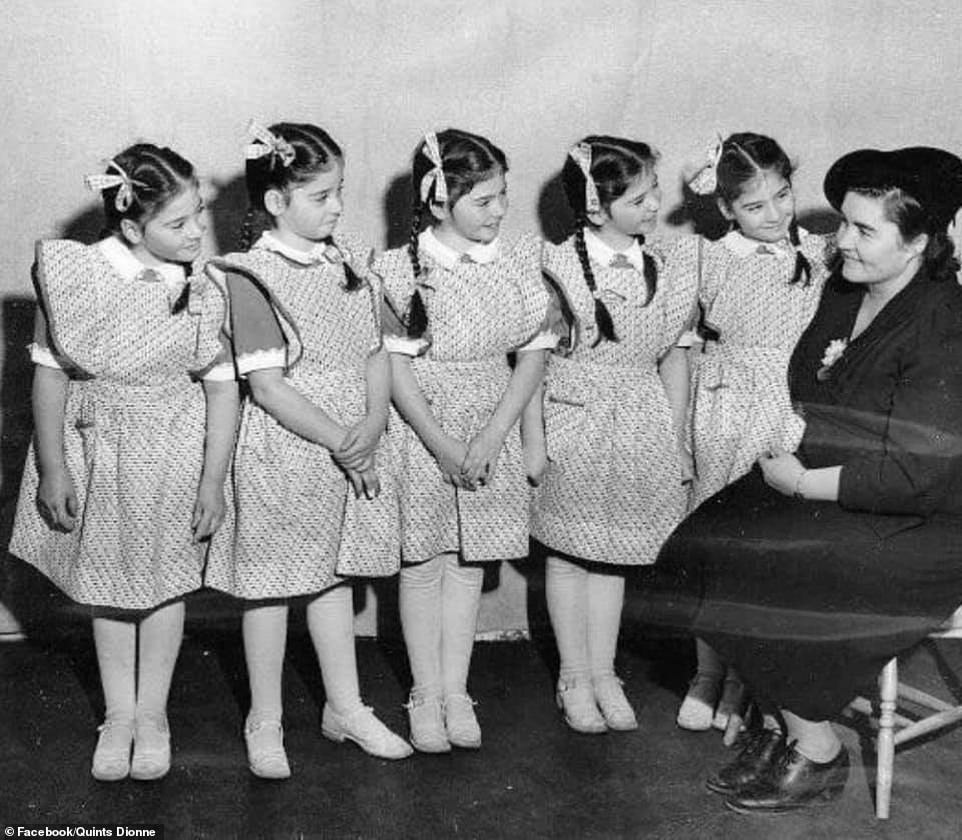 The girls received visits from their parents while they were at ‘Quintland’. They are shown in one photo taken before they were returned to their mother and father aged nine 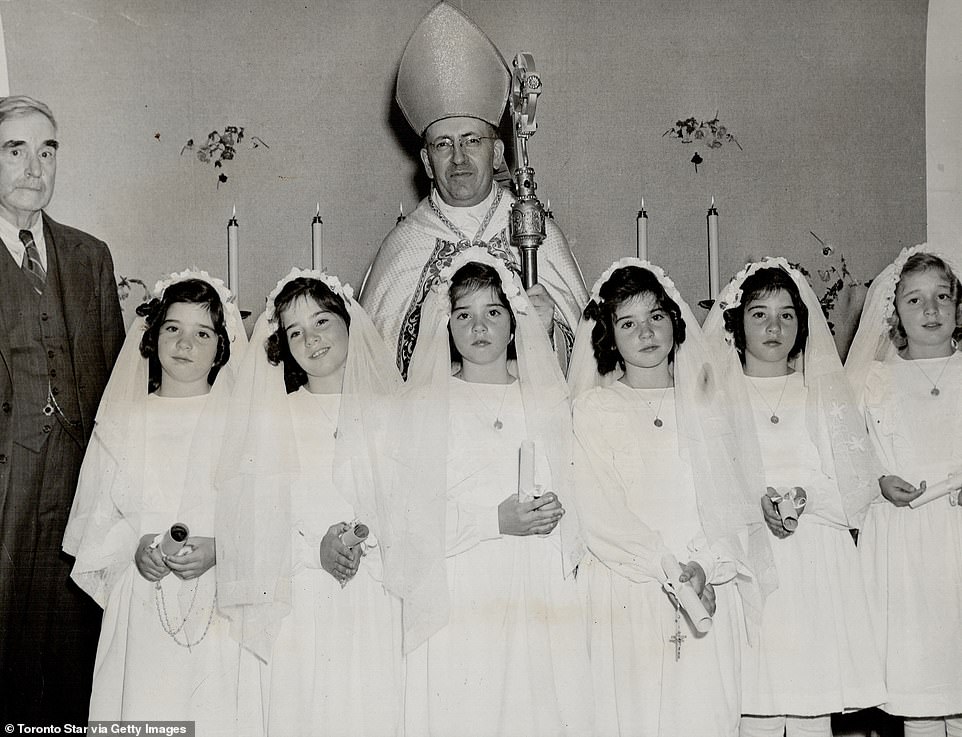 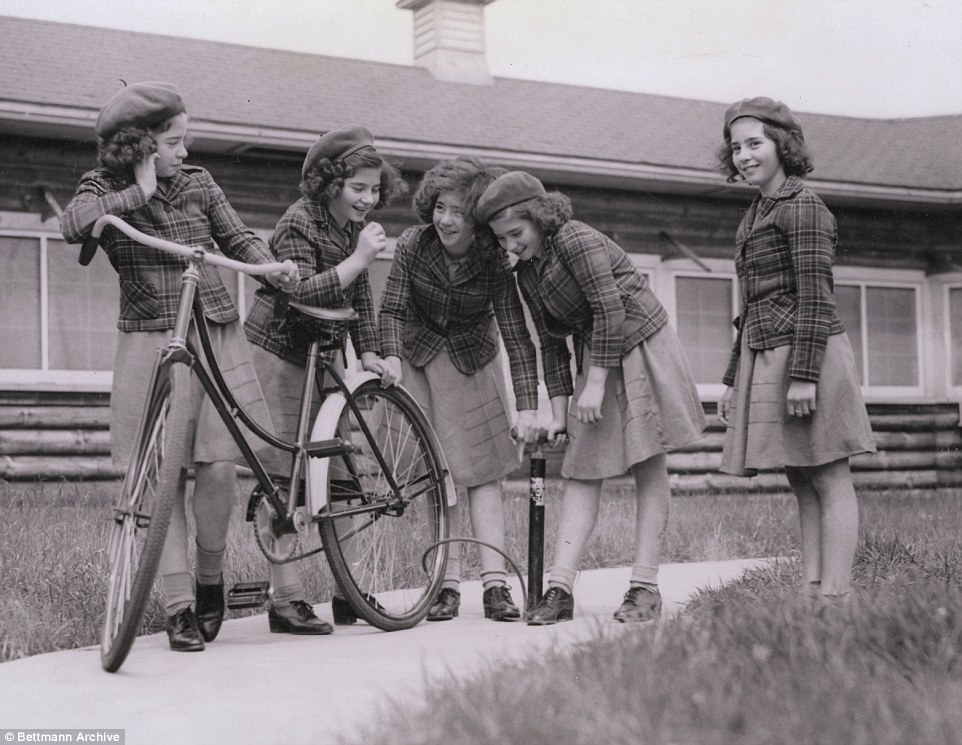 Some time after being released back into the care of their family when they were nine, the girls were given two bicycles to share between them by their father (above) 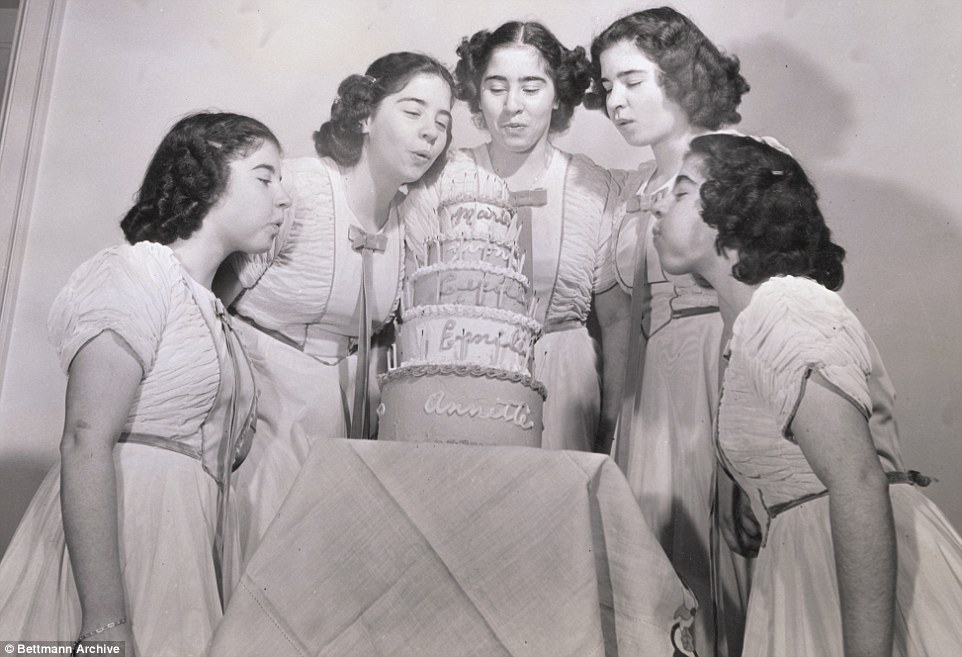 The sisters celebrate their 14th birthday with a five-tiered cake. They had moved back into their parents care and lived in a mansion bought with their own earnings 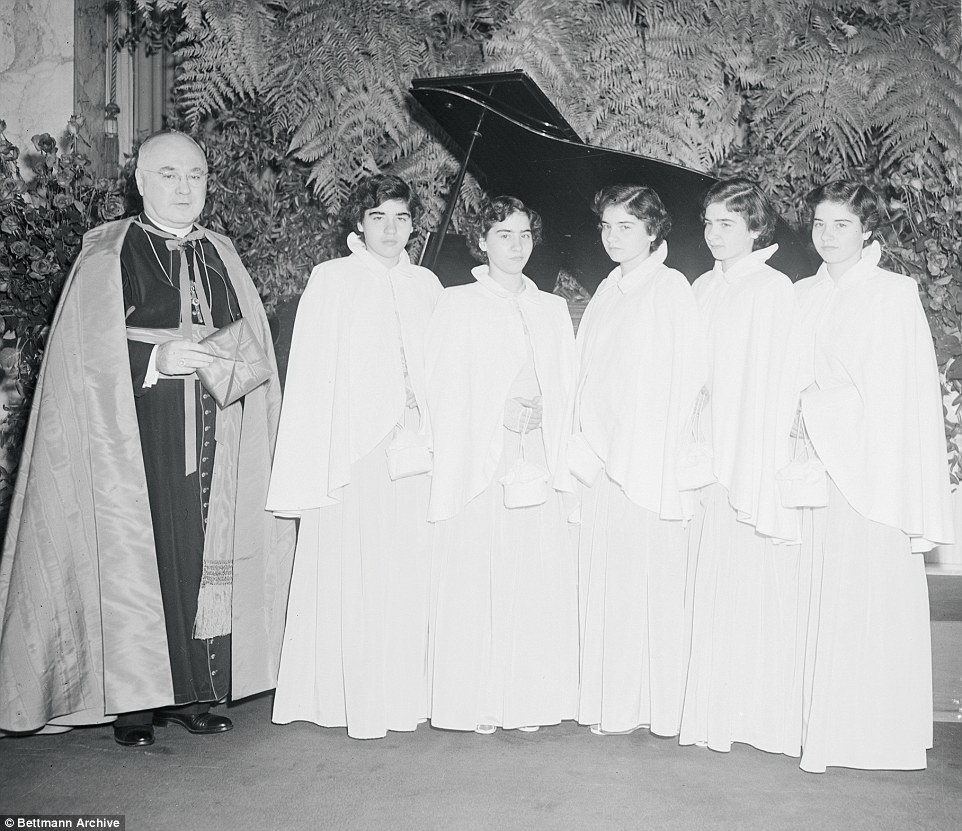 In 1950, the then 15-year-old Dionne sisters perform at the Alfred. E Smith Memorial Foundation Dinner during their first visit to New York 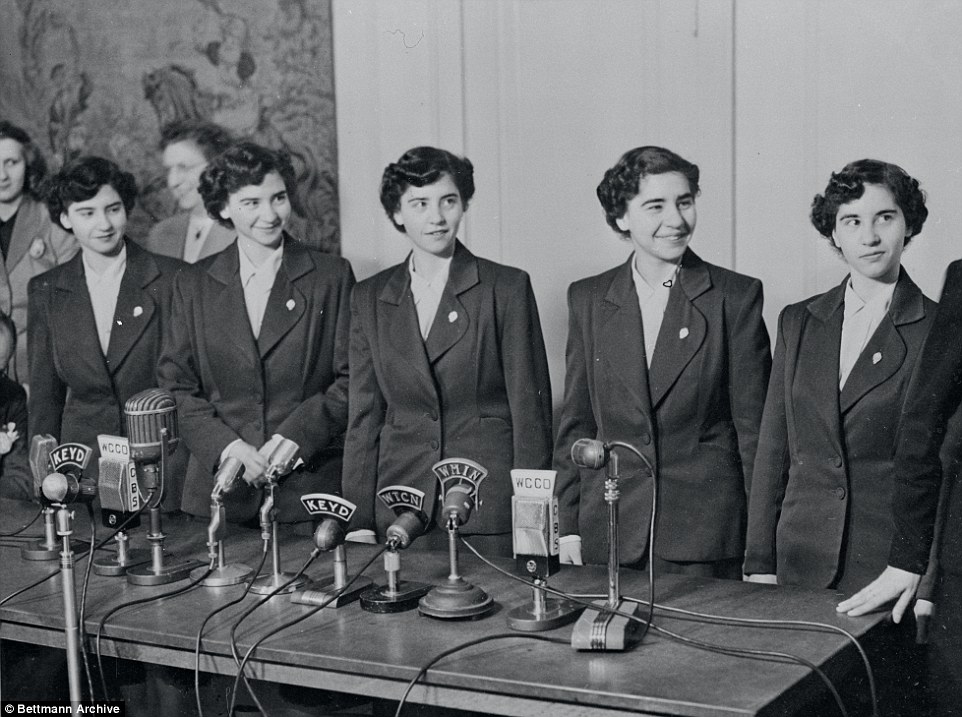 The sisters appeared in St Paul, Minnesota, when they were 17 to speak at their first formal American press conference 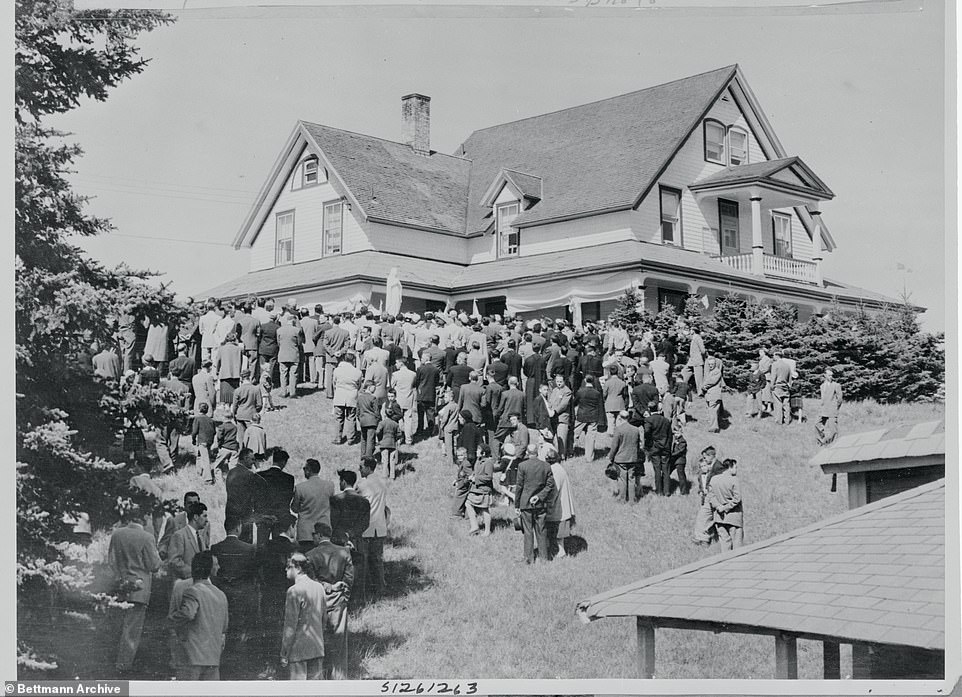 Emilie was the first to die. She died of a stroke in 1954 – aged 20. People flocked to the family home afterwards 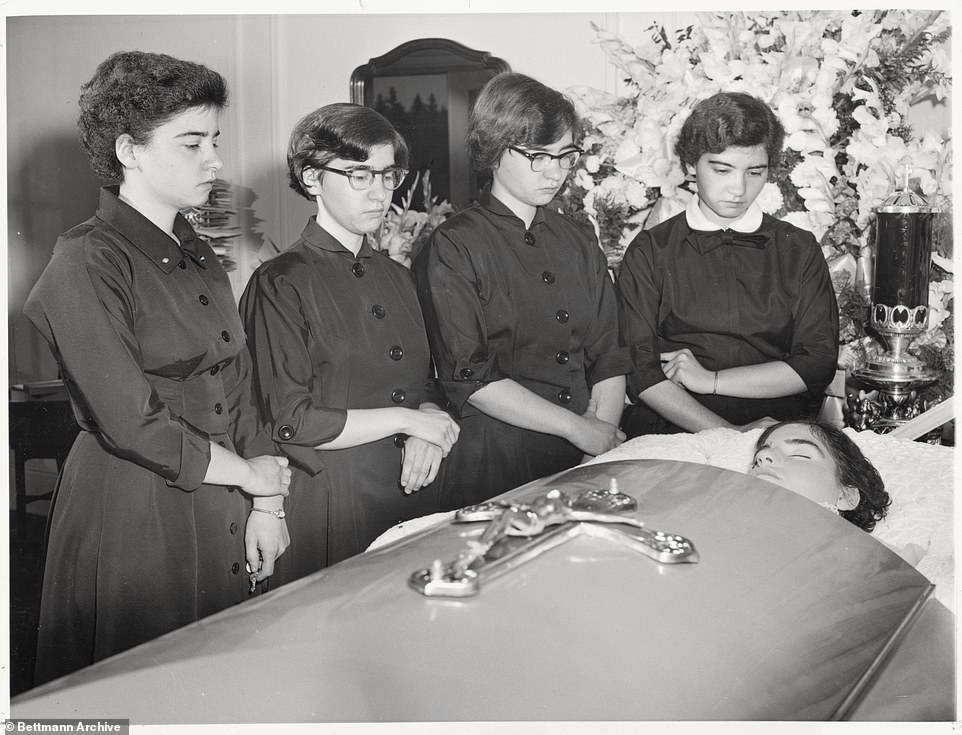 Silent Farewell to Emilie. Callander, Ontario. The four surviving Dionne quintuplets Cecile, Marie, Yvonne, and Annette (left to right), stand with sorrow-laden faces beside the bier of their beloved sister-quint Emilie in a silent farewell just before the funeral 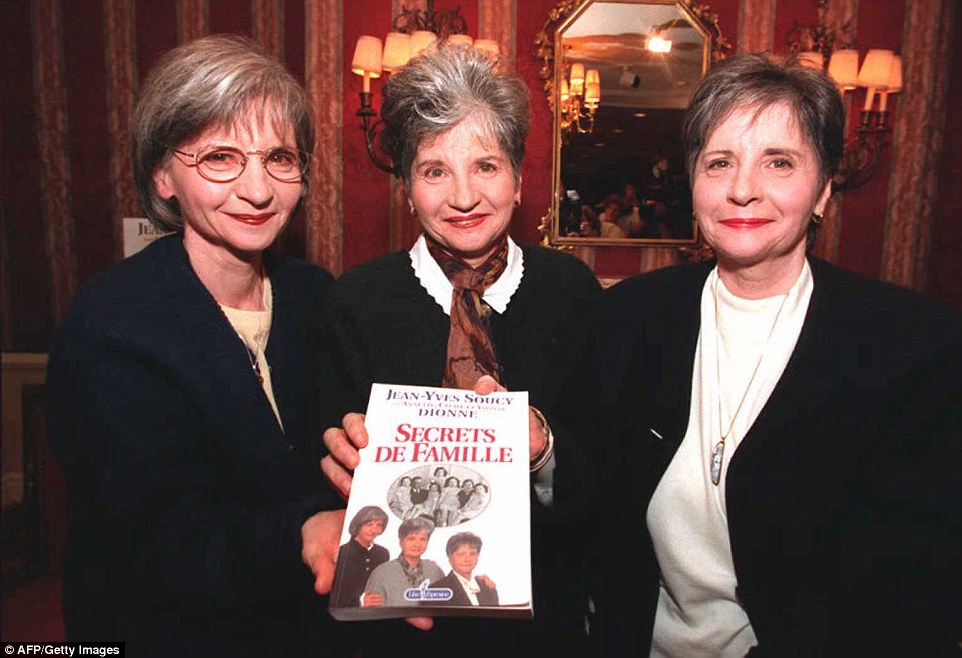 In 1995, Yvonne (left), Annette (center) and Cecile (right) pose with a copy of a book written about their lives 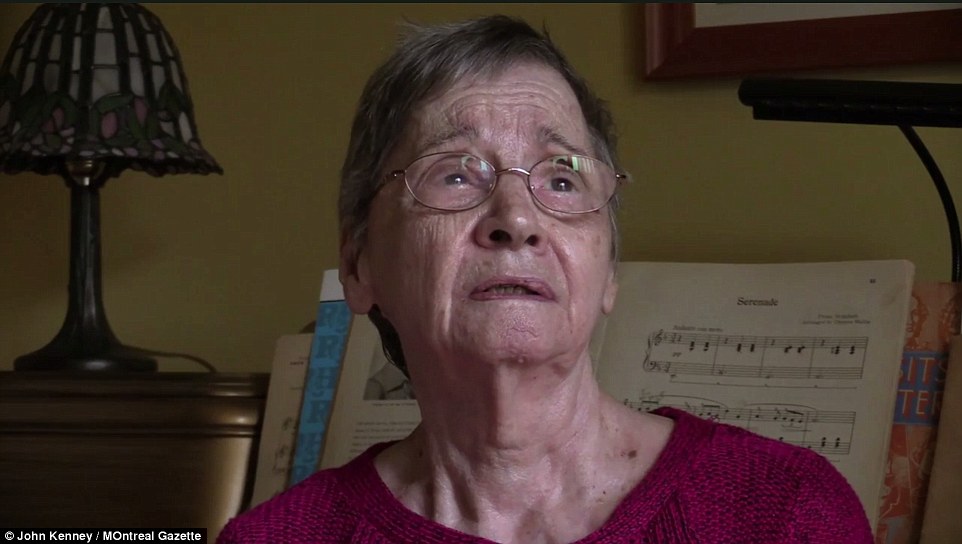 Cecile in 2016. She told in her first interview of almost two decades how she was now forced to live in a care home

Dogecoin Trapped Between Barriers ! Is DOGE Price is Overvalued ? 2021