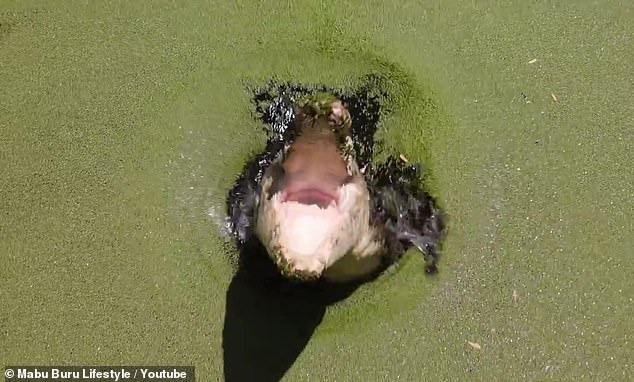 Incredible footage has captured the moment a group of giant saltwater crocodiles leapt from the water to try and snatch a drone.

Mr Mamid who works as a crocodile feeder and tour guide at the park said he was surprised to see how aggressive the animals reacted towards the camera.

The frightening footage shows multiple crocodiles hiding underneath the weed only to soar out of the water and snap their jaws shut – just inches away from the camera.

‘I was pretty confident the crocodiles weren’t going to get the drone but that was a risk I was willing to take,’ Mr Mamid told Daily Mail Australia.

He said that while the crocs in the park’s main lake were more than keen to sink their teeth into the drone, those who were in a nearby lake shied away from the camera.

Mr Mamid has been working at the park since March last year and admitted he’s had a few close calls with the deadly animals.

‘We definitely do fear them because of the level of respect we have for them. They have the strongest bite force out of any animal in the world,’ he said.

‘Their teeth are designed to hold on and never let go.’

On occasion, the park workers are required to walk around the animal refuge and check the fencing – armed with only a two-metre long bamboo stick.

‘Whenever we do that quite often the crocs will come out and try to attack us,’ Mr Mamid said.

‘We go in pairs and whenever a croc comes near us we just whack them over the head with the bamboo.

‘But sometimes the crocs will take the bamboo stick and then you’re surrounded by like 70 crocodiles. That’s why you go in pairs.’

While Mr Mamid is yet to be bitten he said one of his colleagues is often getting nipped – but luckily only from the babies.

The tour guides wrap bands around the baby crocodiles’ mouths while showing them to visitors but the babies can be as aggressive as the adults.

‘I’ve been bitten and it hurts. They’re not going to kill you but they have razor sharp teeth and do a bit of a head shake when they bite you,’ Mr Mamid said.

Mr Mamid regularly shares croc videos to his YouTube channel in the hopes to help people learn more about and respect one of the world’s oldest animals.

The extremism virus from the Trump dynasty!