The bizarre career of Barnaby Joyce including war with Johnny Depp


Barnaby Joyce has reclaimed leadership of the National Party in the latest twist of a turbulent career in which he has threatened to kill Johnny Depp‘s dogs and had an affair with a staffer 18 years his junior.

Mr Joyce, 54, was made Deputy Prime Minister for the second time on Monday after the Nationals voted to axe Michael McCormack in a party room meeting.

The father of six – who has four daughters from his collapsed marriage and two sons with his former staffer Vikki Campion – was humble in victory, saying: ‘I acknowledge my faults’ and ‘I hope I come back a better person’. 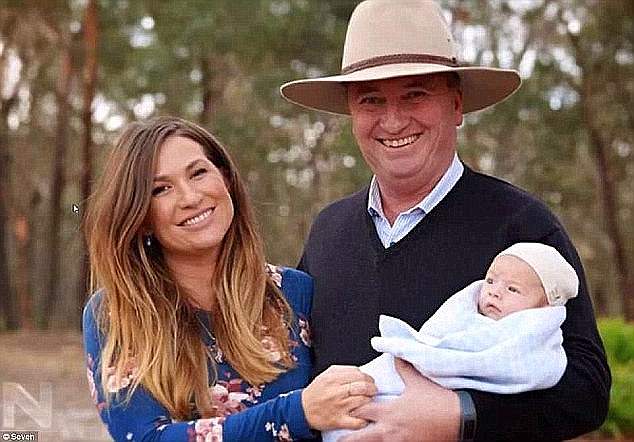 Mr Joyce, 54 (pictured with Vikki Campion, 36, and their son Sebastian), returned as Deputy Prime Minister on Monday after the Nationals voted to axe Michael McCormack 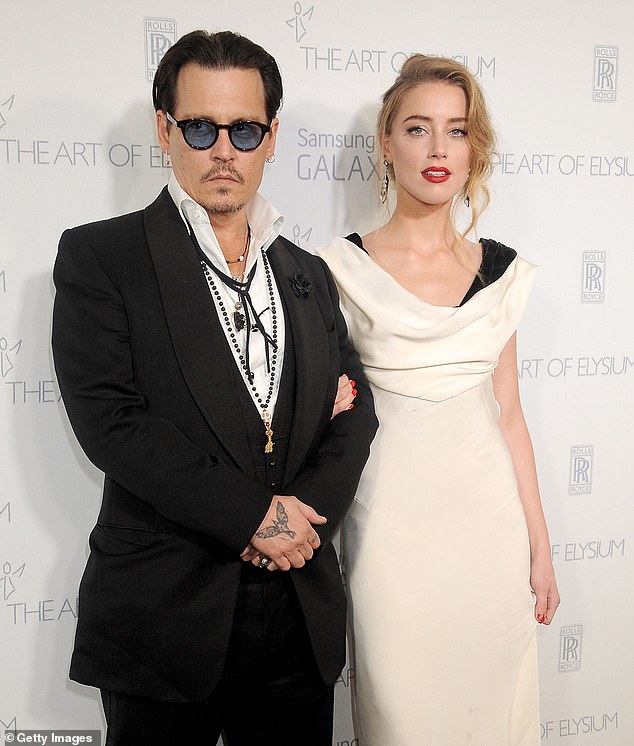 Mr Joyce made international headlines in 2015 when as Minister for Agriculture he threatened to kill Johnny Depp’s dogs. Pictured: Depp and ex-wife Amber Heard

The move doubles Mr Joyce’s salary to $433,575 and begins the next chapter of his political career which began in 2004 when he was elected as a Queensland senator in the Howard government.

The former accountant – who was born in Tamworth, rural New South Wales and studied at the University of New England – became the MP representing his hometown when he switched to the House of Representatives at the 2013 election.

He became deputy leader of the Nationals later that year and made international headlines in 2015 when as Minister for Agriculture he threatened to kill Johnny Depp’s dogs.

Depp had used his private jet to sneak Yorkshire Terriers Pistol and Boo into Australia where he was filming Pirates of the Caribbean, violating bio-security laws by failing to declare and quarantine them.

Mr Joyce said the dogs would be put down if they were not sent home to the US.

‘If we start letting movie stars – even though they’ve been the sexiest man alive twice – to come into our nation [and break the laws], then why don’t we just break the laws for everybody,’ he said during an infamous press conference.

‘It’s time that Pistol and Boo buggered off back to the United States.’

Depp promptly sent his dogs home and a year later insulted Mr Joyce – who he called ‘Barnaby Jones’ by telling US talk show Jimmy Kimmel Live: ‘He looks somehow, like, inbred with a tomato. 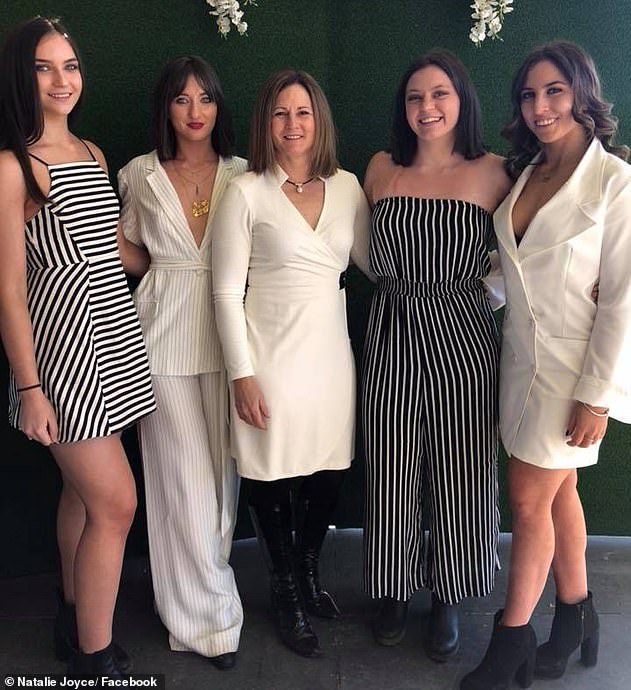 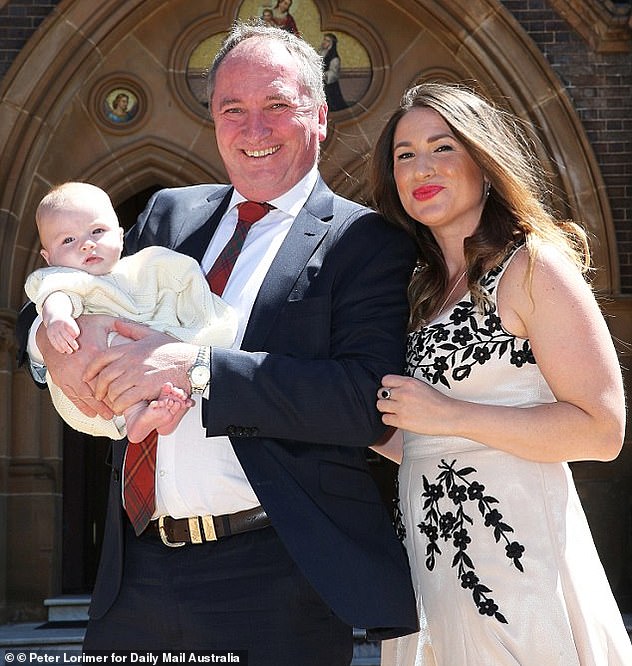 Barnaby Joyce dramatically reclaimed the leadership after a spill motion in the Nationals’ party room. Pictured with former staffer Vikki Campion and their fist baby, Sebastian

‘It’s not a criticism. I was a little worried. He might explode,’ said the Hollywood star.

After less than two years in the job, he was forced to resign because he was found to have New Zealand citizenship through his Kiwi father. In Australia, dual citizens are not eligible to become parliamentarians.

Mr Joyce, who said had never applied for the citizenship and did not realise he had it, relinquished his Kiwi citizenship and won a by-election to reclaim his seat of New England in October 2017. 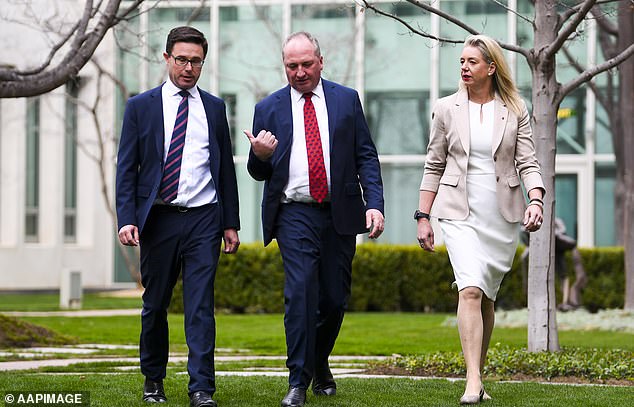 He re-entered Parliament just in time for a crunch vote on same-sex marriage in December that year, a vote in which he abstained after strongly opposing the change by saying it undermined traditional marriage.

Those words would come back to haunt him in February 2018 when it was revealed he was expecting a child with then 33-year-old staffer Ms Campion after an affair which ended his 24-year marriage to Natalie.

The news was revealed in a Daily Telegraph front page which featured a picture of a pregnant Ms Campion under the headline ‘Bundle of Joyce’.

The Nationals leader initially claimed the child may not be his, insisting the identity of the father was a ‘grey area’ – but said he would not take a paternity test and would raise the boy named Sebastian as his.

At the same time, Mr Joyce was accused of a sexually harassing WA Rural Woman of the Year Catherine Marriot after function in Canberra. 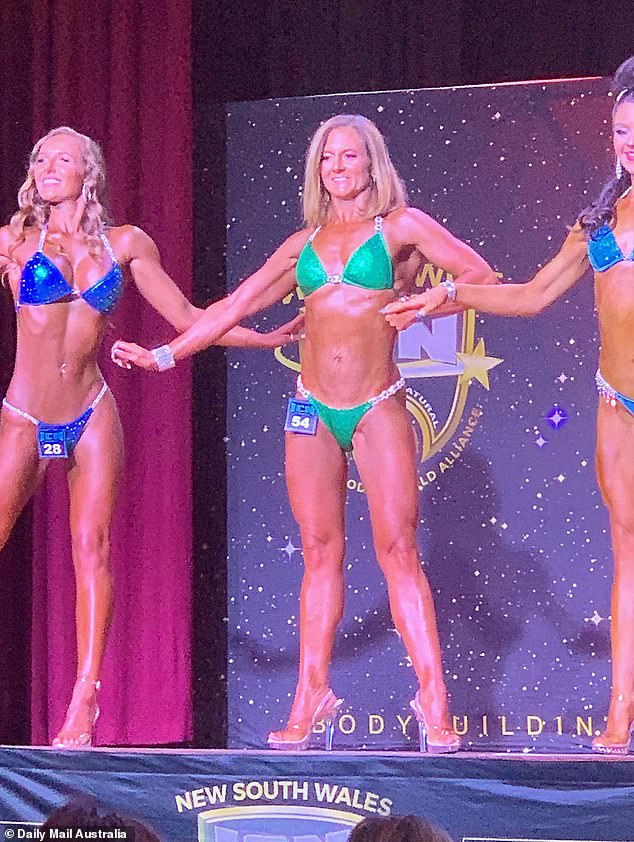 Ms Joyce (in green) competed at her first bodybuilding event in New South Wales in March 2020, to show off what commentators called her ‘revenge body’

Her complaint to the National Party was leaked to the media, forcing Mr Joyce to deny the allegations, calling them ‘spurious and defamatory’.

Mr Joyce resigned from the frontbench because he did not want the allegation to damage the Coalition. An internal investigation was inconclusive due to lack of evidence and no police action was taken.

After he moved to the backbench, Mr Joyce’s ex-wife Natalie said she was left ‘devastated’ by the affair, and said she had always been a single mum because he was frequently away.

In an interview with the Weekend Australian, she said their youngest daughter Odette would ‘not go near’ her own father.

‘Odette’s never known anything but politics. Every time he’d come home she actually wouldn’t go near him… She’s stand-offish because he wasn’t home. That’s really hard,’ she said.

Further details of Mr Joyce’s affair emerged in a book by political insider Niki Savva, who wrote that he was spotted with Ms Campion at a doctor’s surgery for ‘scans’ while she was pregnant.

Ms Campion, a former journalist and state National Party advisor who was hired by Mr Joyce in mid-2016, apparently spoke to her colleagues about her ‘closeness’ with the deputy prime minister, telling fellow government staff about the bushwalks they went on together. 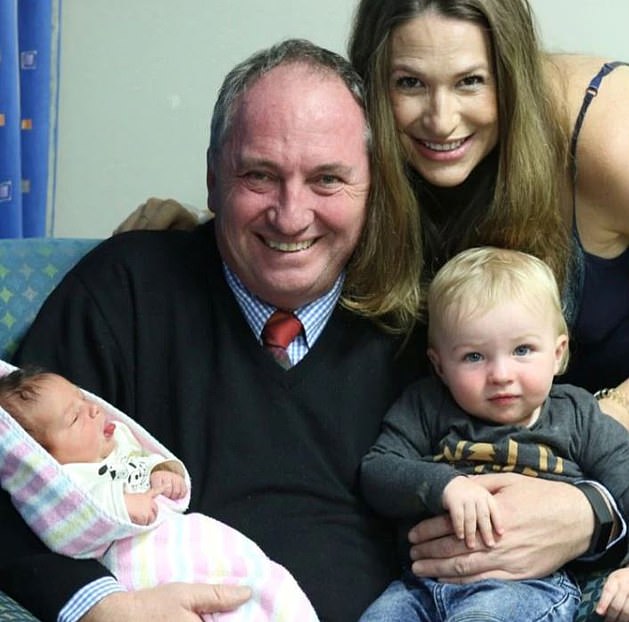 Mr Joyce stepped down as Nationals leader and deputy prime minister in February 2018 when details of his relationship with Vikki Campion made national headlines. The pair are pictured with their two sons, Sebastian and Thomas 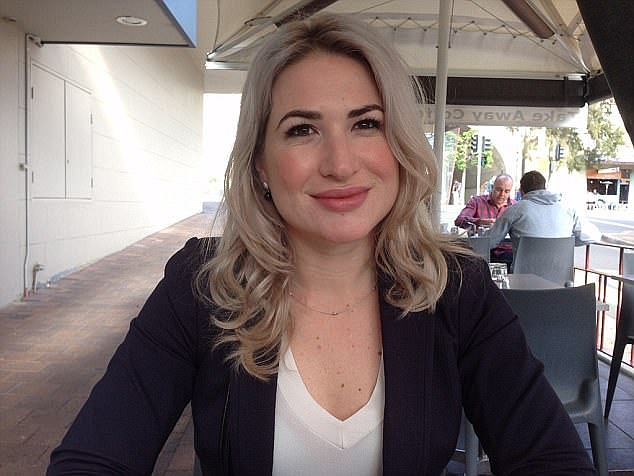 Ms Savva, a former press secretary to ex-Treasurer Peter Costello, wrote: ‘She made no secret of her closeness to Joyce.

‘She would describe him as the loneliest man in Parliament.’

The affair prompted the introduction of the so-called ‘bonk ban’ in Federal Parliament to stop relationships between ministers and their staffers.

During his time on the backbench, coal-supporter Mr Joyce spoke out about standing up for resources sector workers by opposing carbon emissions targets as Scott Morrison appeared to move closer to 2050 net zero target.

On Monday, Mr Joyce said he would be guided by his party on whether to support such a policy.

The comments came after he was propelled into leadership when Nationals leader Michael McCormack was overthrown in a party-room meeting after Joyce supporter Senator Matt Canavan moved a spill motion.

The spill – the third attempt to roll Mr McCormack in as many years – was prompted by growing disquiet over his lacklustre performance as Acting Prime Minister last week, when Mr Morrison was overseas.

But it came after long-running concerns that Mr McCormack was not cutting through in the Nationals’ regional heartlands amid fears that conservative voters would turn to One Nation or the Shooters, Farmers and Fishers Party.

Mr Joyce claimed he did not expect to win a leadership ballot on Monday morning, adding: ‘If I thought it was going to happen I would have brought my hat.’

Asked whether he would try to overturn former prime minister Malcolm Turnbull’s ‘bonk ban’, he said: ‘I can’t and I won’t start telling other people how they should start thinking of other people.

‘I will try, always, to be the better person. I acknowledge my faults. I resigned, I’ve spent three years on the backbench. I don’t walk away from making sure that I can be a better person to do a better job.

‘And I’m reminded by that by the people that I love dearly – my four daughters and my two sons and Vikki.’

Mr McCormack told reporters in Canberra on Monday that he respects the decision made by the National Party, and wishes Mr Joyce ‘all the best’.

Mr Joyce’s return has raised fears that women voters will be turned away from the Coalition, which commentators say already has a ‘women problem’ after former staffer Brittany Higgins alleged she was raped in Parliament House by a colleague and former attorney-general was accused of an historic rape which he denies. 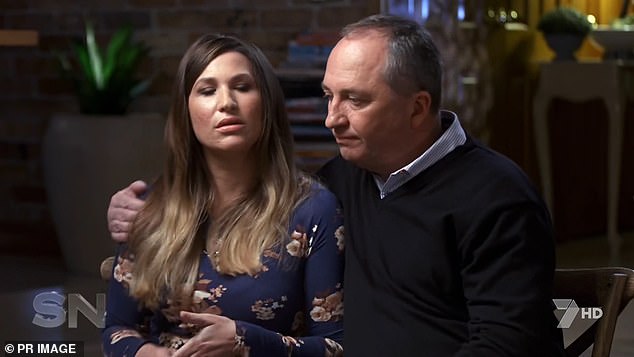