Tracy Grimshaw has slammed Scott Morrison for not attending the March 4 Justice rally where thousands protested against sexual violence in Australia in a blistering speech on A Current Affair.

Grimshaw said there was no excuse for the Prime Minister not to meet protesters – which he had refused to do – and criticised him for saying that women rallying against inequality and sexual violence in other countries would be ‘met with bullets’.

Police in Myanmar had earlier this month fired rubber bullets at civilians who were protesting the Asian country’s military coup. They also shot and killed one man.

Grimshaw added both Mr Morrison and minister for women Marise Payne, who also did not attend the rally, ‘we’re in the wrong game’ if they were unable to deal with criticism of the government.

‘The Prime Minister should have walked outside and met the leaders of that rally today. At the very least his minister for women Marise Payne should’ve been there,’ Grimshaw told viewers on Monday night.

‘Not everyone would’ve welcomed them but if they can’t cop the odd boo, they’re in the wrong game. Sexual assault and harassment is not political so let’s not make it about politics.’

The protesters who rallied across the country on Monday, including just outside Parliament House in Canberra, were calling on political leaders to make greater strides towards equality and ending violence towards women. 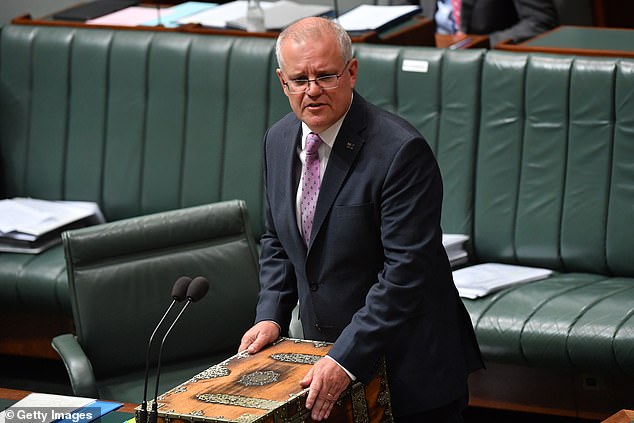 ‘Women and men want a world where reporting sexual assault is a given. Not an agonizing decision where she she has to juggle the risk of ostracism, persecution, shaming and victim blaming against her fundamental right to seek justice,’ Grimshaw said.

She also said ‘we want a world where daughters will grow up not having to manage a groping boss or a violent partner or be too scared to walk home from the bus at night’.

‘Telling us how lucky we are because if we gathered like this in another country like this, we’d be shot, well that just didn’t cut it today PM,’ she said.

Senator Payne defended the pair not attending the protest and said it was not normal protocol for the Prime Minister to attend a rally.

‘Both the Prime Minister and I offered the opportunity to meet with organisers of today’s protest. On a number of occasions and in a number of contexts and those offers were politely declined,’ Senator Payne told 7:30.

Mr Morrison was earlier heavily criticised by politicians for his comments, including Greens leader Adam Bandt who tweeted: ‘Scott Morrison to marchers today: be glad we didn’t shoot you. Unbelievable. He just doesn’t get it.’.

As thousands of women marched just outside Parliament House, Mr Morrison championed the right to free speech and protest – but his choice of words sparked anger.

‘This is a vibrant liberal democracy, Mr Speaker. Not far from here, such marches, even now, are being met with bullets – but not here in this country,’ he said in Parliament.

‘Not here in this country because of this is a triumph of democracy when we see these things take place.’ 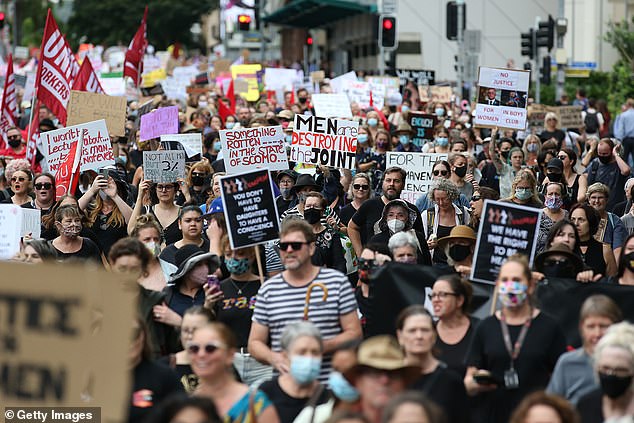 Thousands of women marched in cities around Australia on Monday. Pictured: Brisbane

Liberal Senator Jane Hume said the comment should not be over-interpreted and insisted he was just making the point that Australia supports freedom of speech.

Crowds chanting ‘enough is enough’ had stood on the front lawns of Parliament House, within a few hundred metres of where political leaders can make the changes protesters are seeking.

Ms Hendry rejected Mr Morrison’s offer to meet, instead asking him to visit protesters. He did not, but about 15 coalition MPs and senators went to hear speeches.

Labor leader Anthony Albanese attended the rally with a contingent of colleagues, along with the Greens and independents.

Signs including ‘we are marching for everyone’s daughters’, ‘stop violence against women’ and ‘it’s time for men to change’ were visible in the crowd.

Those signs could be cemented in the nation’s history, with attendees encouraged to leave them at the National Library of Australia for a future exhibition. 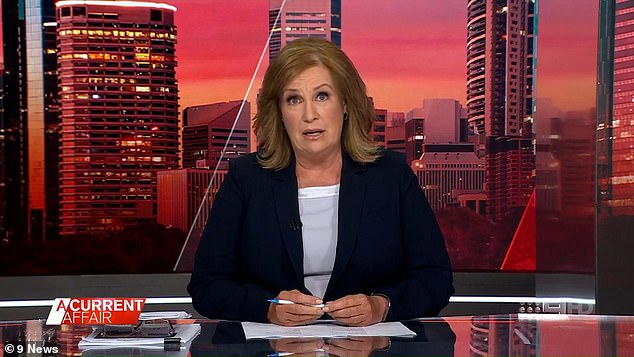 People were also encouraged to head to the Museum of Australian Democracy at Old Parliament House, to sign a book which will also feature in a public display.

Former Liberal staffer Brittany Higgins had a hand in kick-starting the movement, after she went public with claims she had been raped by a colleague at Parliament House.

‘For so long it felt like the people around me only cared because of where it happened and what it might mean for them,’ she told the crowd.

‘It was so confusing because these people were my idols. I had dedicated my life to them. They were my social network, my colleagues and my family.

‘And suddenly they treated me differently. I wasn’t a person who had just gone through a life-changing traumatic event, I was a political problem.’ 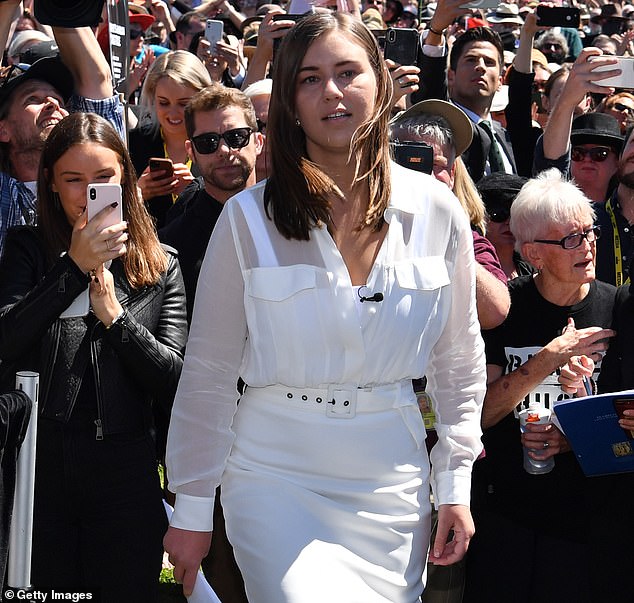 ‘We say to the men inside this place who are drunk on power, and those around the country who yield their power more privately – don’t think you have, or you will, get away with it,’ she said.

The crowd is calling for an independent inquiry into Attorney-General Christian Porter, who rejects allegations he raped a woman in 1988 when they were teenagers.

Licia Heath, who runs a runs not-for-profit Women for Election that helps women run for public office, travelled from Sydney to attend the Canberra protest.

Ms Heath doesn’t expect the issue to disappear for the government.

‘The public is on to it and they are not looking away. And that’s when change happens. The behaviour’s not new, what’s new is the public’s reaction,’ she told AAP.

‘Shame on the international community’: meet two Syrians who escaped to Europe with their lives

'Shame on the international community': meet two Syrians who escaped to Europe with their lives