President Donald Trump has taken time out of his Christmas Day to fire a hit at the nation’s glossy magazines for failing to give Melania Trump a cover while she was First Lady.

Michelle Obama, 56, appeared on a whopping 12 covers during her eight years in the White House while Melania, 50, has not appeared on a single cover through her husband’s four-year term.

The president on Friday night retweeted a comment from right-wing publication Breitbart that called out the ‘elitist snobs in the fashion press’ with Trump adding that Melania is ‘the greatest of all time’.

Trump shared the tweet blasting the magazines altdespite not having yet commented on the bomb that exploded in Nashville on Friday morning or delivered an update on his stance on the COVID-19 economic relief bill. 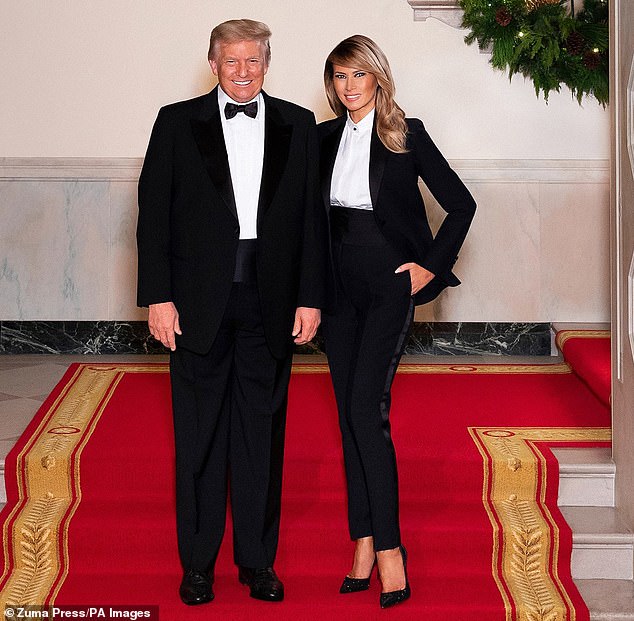 Trump has taken time out of his Christmas Day to fire a hit at glossy magazines for failing to give Melania a cover while she was First Lady. Pictured above in their Christmas picture 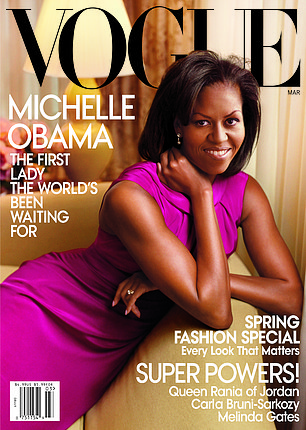 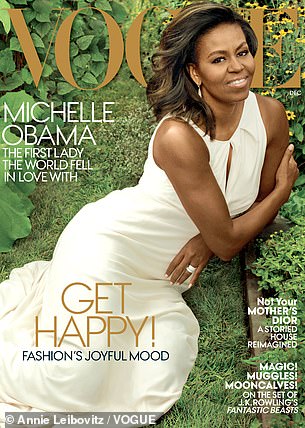 Michelle Obama appeared on a whopping 12 magazine covers during her eight years as First Lady — including three Vogue covers, as pictured above

The Breitbart article detailed Melania’s outfit as she left the White House on Wednesday to spend Christmas with the extended Trump family in Mar-a-Lago.

She was wearing thigh-high black leather boots by Christian Louboutin, which retail at $2,195, and a wool coat by Azzedine Alaïa which costs $6,610.

‘The elitist snobs in the fashion press have kept the most elegant First Lady in American history off the covers of their magazines for 4 consecutive years,’ the publication stated.

Melania’s absence as a cover star has been keenly felt by Trump who has often commented that she has been overlooked when her predecessor Obama made frequent appearances. 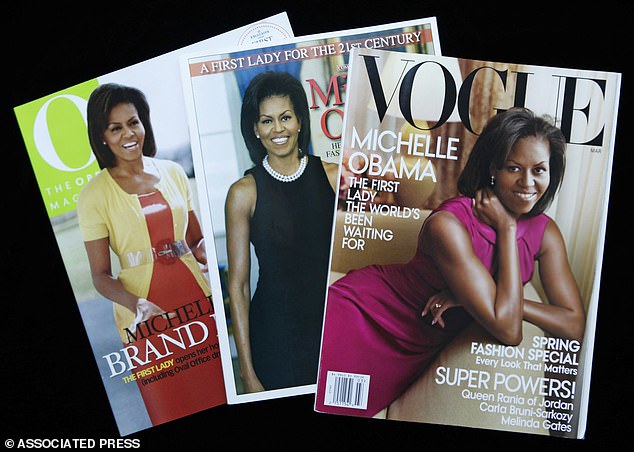 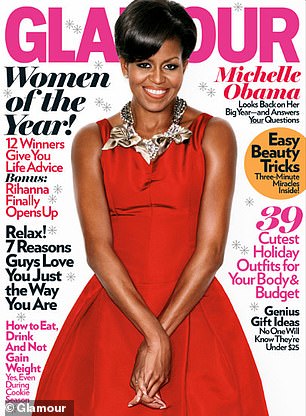 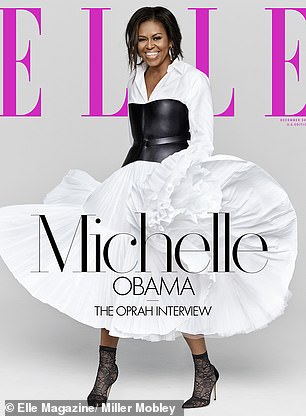 Obama in fact made three Vogue covers during her time as First Lady, appearing on her third in November 2016, shortly after Trump’s election win when Melania was already preparing to enter the White House.

Her first came shortly after her husband took office in 2009 and the second in 2012.

On Friday, Trump fans agreed with Breitbart as they tweeted praise for the outgoing First Lady.

‘Melania is always, always stunning and elegant!!! It is their loss of millions to not have published cover stories of our lovely Melania so loved by Patriots,’ write Twitter user @dewitt_gj.

‘Really sad. Melania is beautiful and has a huge heart,’ added another user named LJ.

‘I so agree! Not only is she beautiful and classy, but intelligent, hardworking and kind. I sent her a gift from us @ Nifty, and she took the time to hand write a note back to me. I appreciate all that she stands for @FLOTUS Merry Christmas!’ wrote @michellehensley.

Back in February, fans were also angered after conservative actor James Woods questioned why the first lady has ‘never graced our nation’s major style magazine covers’. 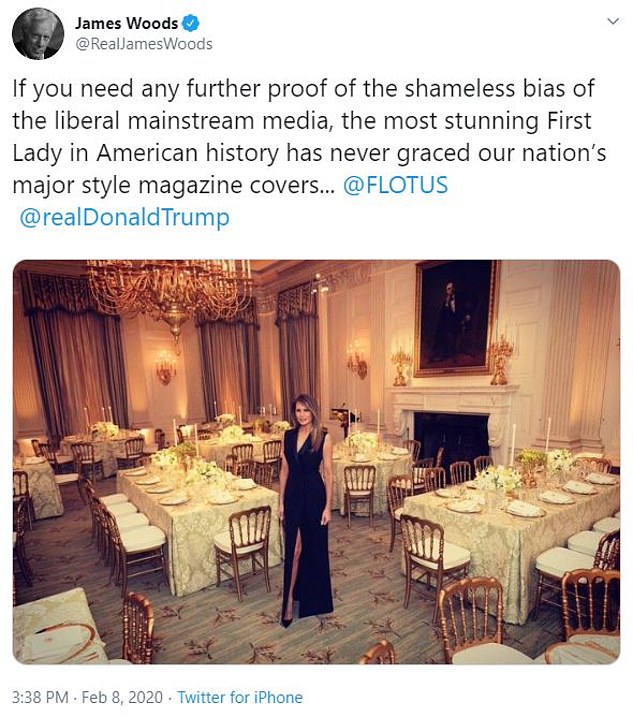 ‘If you need any further proof of the shameless bias of the liberal mainstream media, the most stunning First Lady in American history has never graced our nation’s major style magazine covers… @FLOTUS @realDonaldTrump,’ he wrote.

Melania worked as a fashion model before she became First Lady, and it was that job that led her to Donald Trump.

Before Melania became First Lady, she donned a Christian Dior wedding dress on the February 2005 cover of Vogue following her wedding to Trump.

Five years prior to that, she starred in a nude cover shoot for British GQ when she was still known by her maiden name, Melania Knauss.

More recently, she covered the February 2017 issue of Vanity Fair Mexico, though the story and photos were recycled from a profile featured in GQ in April 2016. 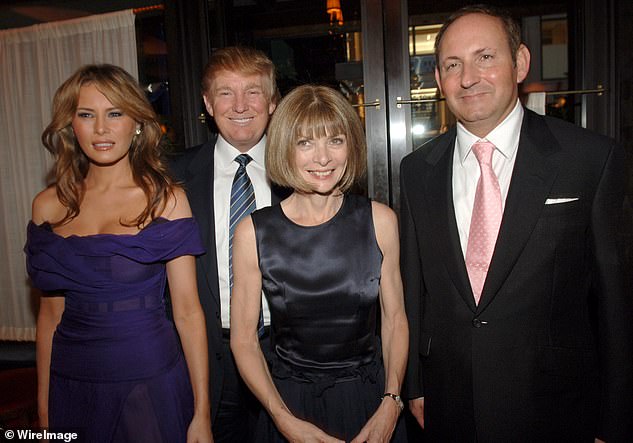 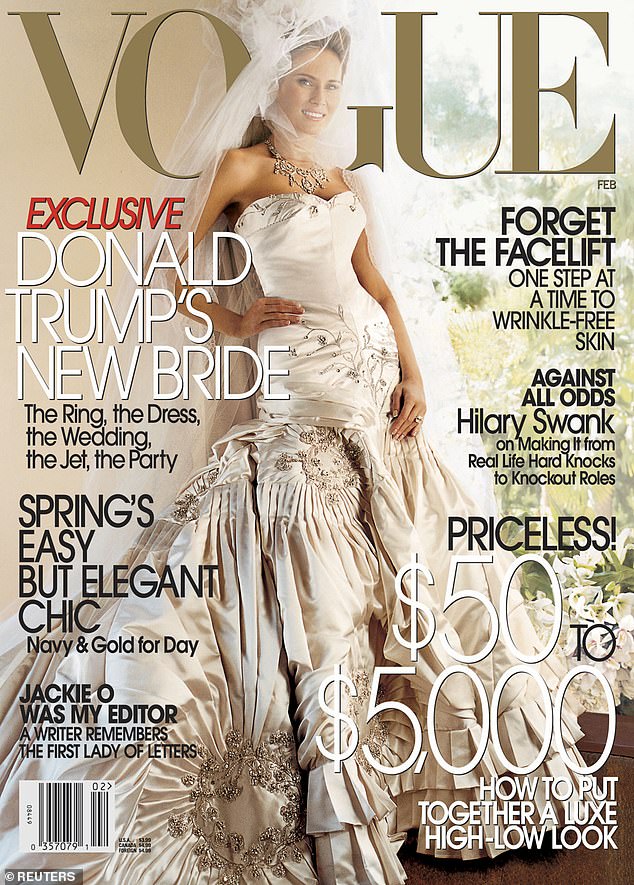 Before Melania became first lady, she donned a Christian Dior wedding dress on the February 2005 cover of Vogue following her wedding to Trump

More recently, Melania covered the February 2017 issue of Vanity Fair Mexico, though the story and photos were recycled from a profile featured in GQ in April 2016

Vogue editor-in-chief Anna Wintour has never explicitly said she would not have Melania on the cover again, but she has suggested that she isn’t interested in doing so.

While conducting an interview with the editor for CNN in April 2019, Christiane Amanpour noted that Anna has made ‘overtly’ political statements with her political profiles.

Among them was a profile of Kamala Harris in the April 2018 issue of the magazine.

Melania has also been torched for several fashion choices she has made while First Lady including a $39 Zara jacket that read ‘I Really Don’t Care’ which she wore while on a trip to visit detained migrant children in July 2018. 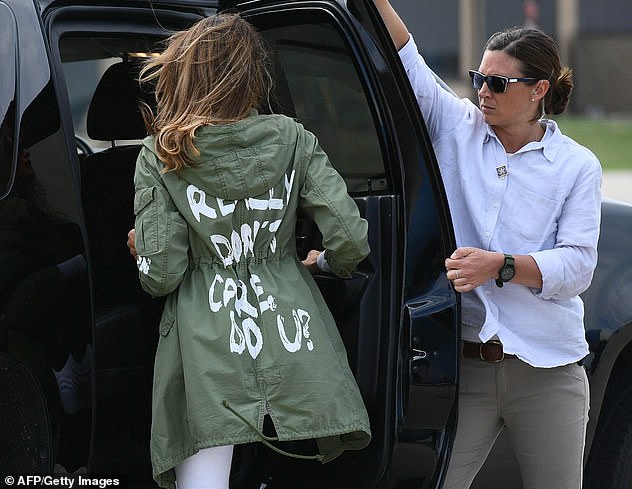