A father filmed his twin daughters’ responses to him shaving all of his hair off for the first time.

Jonathan Normoyle, from Ohio in the US, has racked up almost 40,000 followers on TikTok from his posts with his children.

A recent video showing his twin girls seeing him for the first time after he shaved his head and face has unexpectedly gone viral across social media.

Responses have gushed about the ‘true love’ as one of the sisters can be seen trying to protect her terrified twin, despite also being scared of Jonathan’s unfamiliar appearance. 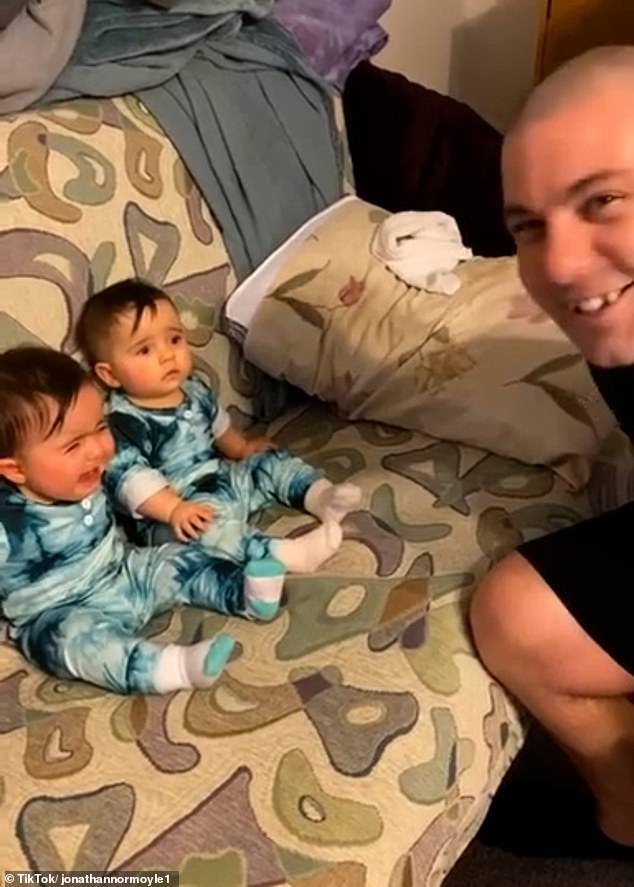 Jonathan Normoyle, from Ohio in the US, has gone viral across social media after sharing a clip of his twins (pictured) reacting to his shaven appearance 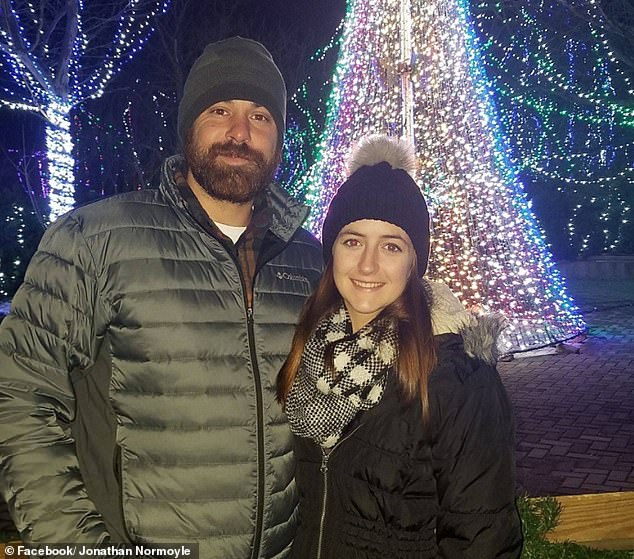 The clip begins with the twins innocently sitting on a sofa and in good spirits, however things take a sudden turn as Jonathan makes eye contact and tries to get their attention.

Smiling, he asks: ‘What are you doing?’

As the twins nervously analyse his expression, one looks to the other for reassurance.

But unable to provide any comfort, the twin looks down and begins crying, while the other continues to stare at Jonathan.

The father opens his arms to welcome his crying daughter for a hug, which is blocked when her sister places an arm in the way.

She then also begins crying as Jonathan struggles to hide his amusement by their reaction.

He posted the footage with the caption: ‘I shaved for the first time in a while and my girls did not like it.’ 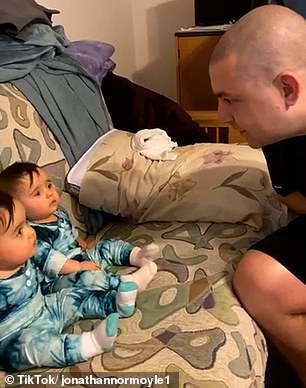 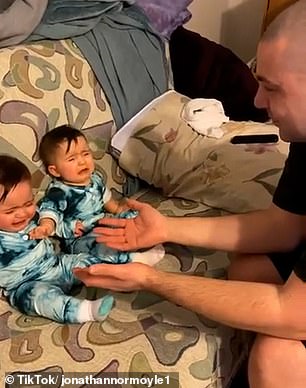 The video shows the twins examining Jonathan’s face before bursting into tears when he stretches out his arms (pictured, left and right)

Videos posted since the clip went viral show the babies are back to being happy, while  Jonathan’s facial hair is slowly growing back.

He racked up over 1 million likes, with many people commenting about the sisters’ eagerness to care for each other.

One person wrote: ‘Omg no freaking way the way she put her hand in front of her never ever seen anything like that astonishing’

Another joked about his hair, saying: ‘You better put it back! Get you some Gorilla Glue spray and put it back. NOW’

‘Ok but that’s TRUE LOVE. She protected her even though she was scared,’ a third said.

Another added: ‘Sis put her hand out like YOU ARE NOT TAKING MY SISTER STRANGE MAN’

Comments on the clip have joked about one of the twins trying to protect her sister, while also being terrified of their father

Highly anticipated Meghan and Harry interview to air at last

Watch ... a police car broke down, driving the Pope's motorcade in Mosul

Mother, 23, named a sex assault victim on social media when her brother was jailed for attacking him

NFL star Carl Nassib has become the first professional player to come out as gay.Nassib, a...