Vets reveal the subtle signs that your dog might be stressed

UK animal charity Blue Cross is warning dog owners to be on the lookout for signs that their pup is stressed, which it says can lead to behavioural issues.

Obvious signs a dog is stressed include a loss of appetite, aggression, having its tail between its legs or backing away from someone or something, Blue Cross says.

Meanwhile, subtle signs of stress more easily missed are excessive panting, pacing back and forth, licking its lips when not eating or drinking and pinning its ears back.

The charity is concerned that thousands of dogs could be sold or abandoned if the signs of stress are misinterpreted as an odd personality defect. 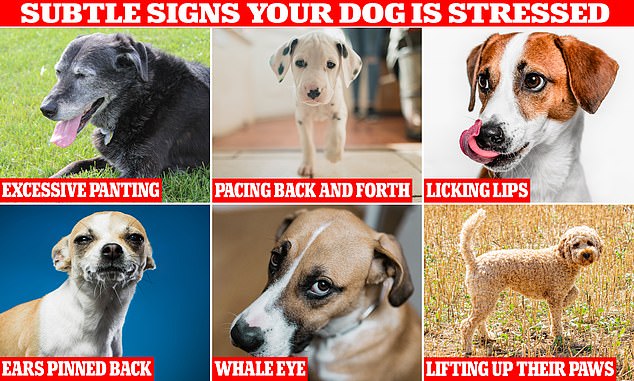 Subtle signs of stress that an owner can miss or misinterpret are excessive panting, pacing back and forth, licking lips (when not eating or drinking) and pinning its ears back

‘For example we might think a dog who yawns is just tired, or if they’re not eating that they’re just not hungry.

‘In fact both of these can be signs that your dog is anxious about something.’

Blue Cross also fears some dogs may be stressed and develop behaviour issues as routines start to change at home when the Covid 19 lockdown ends.

Dogs purchased as puppies in the last year have only ever known what it’s like to have their family around them at all times.

The sudden change when owners start to commute to the office again could trigger separation anxiety in dogs.

Owners should therefore get their dogs used to short half-hours periods of being alone now, to get them used to potentially being alone for much longer periods of time. 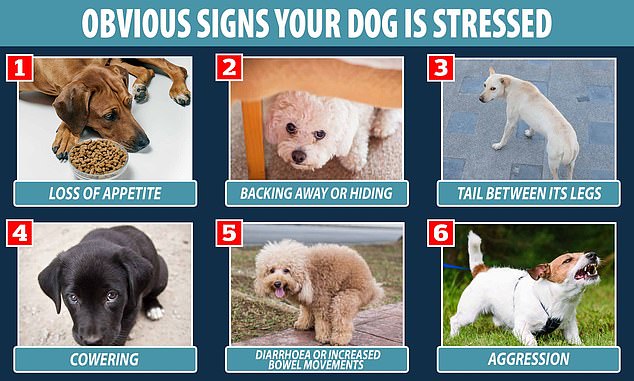 Obvious signs a dog is stressed include a loss of appetite, aggression, having its tail tucked between its legs or backing away from someone or something, Blue Cross says

Over the last year, Blue Cross has received more than 500 calls to its behaviour line from concerned owners needing advice.

‘Many of the calls last year were due to pets struggling with changes to their routine, with people and families being at home more,’ said Claire Haynes, also an animal behaviourist at Blue Cross.

‘Dogs like routine and the new normal may be confusing and stressful for them.

‘With routines set to change again, this could come as a shock and lead to more stressed out pets and behaviour issues if the signs aren’t spotted early and handled correctly.

‘In the most serious cases, stress could lead to unwanted behaviours, such as aggression and health problems.’

– Yawning – unless your dog is tired

– Excessive panting – often with a curled tip of their tongue

– Pacing back and forth

– Licking lips when not eating/drinking

– Ears pinned back, perhaps with their head down or turning away

– Dilated pupils or red around the eyes

– Lifting up their paw

– Backing away from someone or something, or even hiding away

– Tail tucked between their legs 4. Cowering (shrinking down or crouching)

– Trembling or shivering (when they’re not cold or excited)

In the UK, hundreds of dogs bought as puppies during lockdown last year are being abandoned by owners who claim to not have the time or resources to look after them, it was recently revealed.

With some people having paid out large sums for new dogs and puppies during lockdown, and prices continuing to surge due to demand, some owners may look to sell their dog online to recoup some of their financial investment they made.

Sellers have flooded pet websites with adverts for dogs aged between six and 12 months and many young pups are flooding rescue centres.

Puppies in particular have missed out on normal life during in the last year – and have been unable to attend training classes due to lockdown measures, which just increases the risk of behavioural issues.

Blue Cross is therefore urging people who may be struggling with a pet’s behaviour to seek support and advice from a charity or registered trainer, rather than giving up and selling the animal on to a new owner.

Dr Roger Mugford, an animal psychologist used by the royal family, has advised dog owners to have 30-minute breaks from their pets several times a day in order to ease them into being alone when the lockdown ends.

Blue Cross also believes owners should be planning ahead and making gradual changes to their routines now to ensure their pets are ready for ‘the new normal’.

In some cases, dog owners might be taking their pets on public transport to keep them company throughout the day.

‘If you’re going to be travelling into work with your dog, do practice runs of the route with them so that by the time you’re going back to the office your dog feels confident travelling in with you on the train or tube,’ said Smith.

‘If you’re planning to leave you dog at home while you go to the office, make sure again you build up the time you spend away from them so that they can get used to you not always being there.

‘We’d never advise leaving a dog at home alone for long periods of time, so if needed make sure to arrange a dog sitter or someone your pet trusts or can build up that trust with so that you can be confident of leaving them together.

‘Start making any changes to your daily routine slowly.’

Dogs will suffer ‘extreme separation anxiety’ when the lockdown is lifted after getting used to being pampered, Queen’s corgi trainer reveals 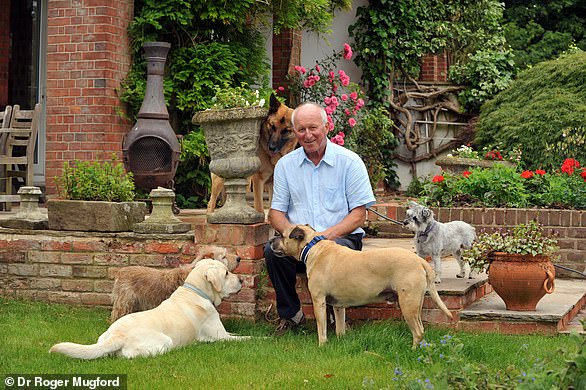 Dr Roger Mugford, pictured at his home in Surrey, an animal psychologist used by the royal family, said that owners need to start preparing their pets for the return to a normal routine to avoid any issues

The Queen’s corgi trainer has claimed dogs will experience ‘severe separation anxiety’ when the lockdown is lifted after pampered pooches have become used to having their owners at home.

Dr Roger Mugford, an animal psychologist used by the royal family, said that owners need to start preparing their pets for the return to a normal routine to avoid any issues.

Speaking to The Times, the specialist from Chertsey, Surrey explained that while people are working from home, dogs can build up a ‘huge reservoir’ of over-dependency’ which could see them suffer at a later date.

‘When left alone, dogs can chew the house, annoy the neighbours by constantly barking, urinate and defecate inside, sometimes even self harm.

‘Put a webcam on your dog and you’ll see howling and pacing and other distress signs,’ he said.

He advises owners to have 30 minutes breaks away from their pets several times a day in order to ease them into being alone when the lockdown ends.

Anxiety in humans has risen during the coronavirus pandemic, which has taken more than 16,000 lives in the UK and infected more than 125,000 people.

Many have relied on their pets for emotional support, Dr Mugford explained.

He said pets will see a ‘huge shock’ when the lockdown is lifted, and they need short structured training sessions in the meantime.

The trainer has been a helping hand to the royal family for years, and in 2002 helped to train Princess Anne’s dog Dotty after it bit two children in Windsor Great Park.

He has also visited Windsor Castle to help the Queen control her corgis and dorgis, which are Daschund-corgi crosses.

Dr Mugford, who also trains the dogs of celebrities and rockstars, was called in to help when the monarch had eight or nine dogs, and ‘quite dangerous’ fights were breaking out between them.

The trainer helped to solve that particular issue, but said the Queen is an ‘amazing dog owner and trainer’, adding that she could have easily done his job in her younger days.

‘She’s quite methodical and uses rule-based procedures,’ he said.