Victorian Premier Daniel Andrews will return to work on June 28 – more than three months after suffering a serious spinal injury when he fell down the stairs.

In a statement on Saturday night, Mr Andrews said the broken vertabra he suffered on March 9 during the fall at a property in Sorrento, south-east of Melbourne had ‘almost fully healed’.

‘This week I had another round of scans and a meeting with my care team at the Alfred and got some good news,’ he said. 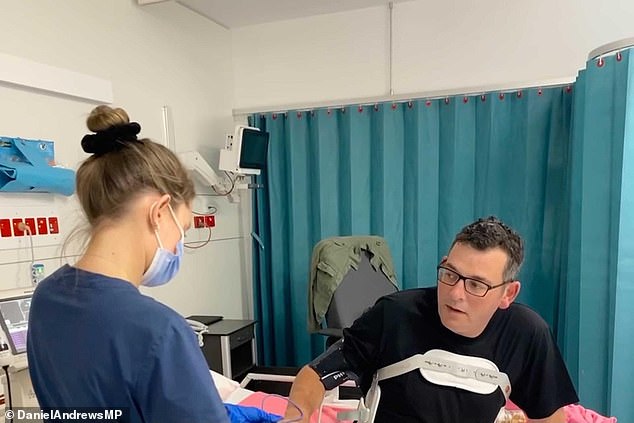 Daniel Andrews was injured on March 9 and spent 10 days in hospital. Conspiracy theorists claimed this image was photoshopped to show his head on some-one else’s body

‘They’re letting me take off the back brace that I’ve had to wear for the last three months.

‘The six broken ribs will take a while longer to finish healing and doctors tell me that between the ribs and getting used to not having the brace on, the next couple of weeks will be a painful adjustment.

‘But overall I’m feeling good and have been given the all-clear to return to work on Monday June 28. I’m looking forward to it’.

In March, the politician suffered a serious back injury after he slipped on stairs at his holiday house and has been on extended sick leave.

Conspiracy theories over his injury and hiatus from public appearances began circulating shortly after.

However, Mr Andrews quickly quashed these when he ordered Ambulance Victoria to release a statement about their attendance at the incident following questions from Victoria’s Opposition leader.

Liberal leader Michael O’Brien said asking questions was ‘legitimate’ to provide voters with a clear picture of what happened.

In his statement on Saturday, Mr Andrews thanked his wife Catherine and children as well as ambulance officers and medical specialists for looking after him as he healed.

‘I’m grateful to James Merlino for stepping in to lead the government and the state through a really difficult time – he’s done an amazing job.

‘And finally, a special thanks to the tens of thousands of Victorians – especially all the kids – who’ve sent cards and letters and emails.

‘Your kindness and concern is the best medicine … Being Premier is a great honour. I cannot wait to get back to work, fit and healthy – and getting things done.’

Only one fresh local case was recorded in the state on Saturday, and none on Friday, but testing commander Jeroen Weimar indicated this was of little comfort. 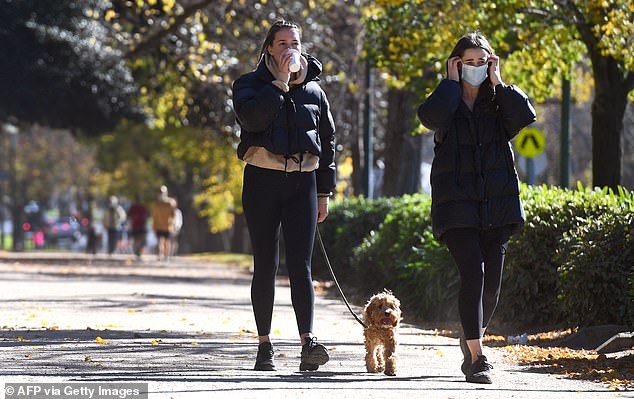 Melbourne has just emerged from the city’s fourth lockdown (pictured: people exercise in lockdown on June 2 in Melbourne) 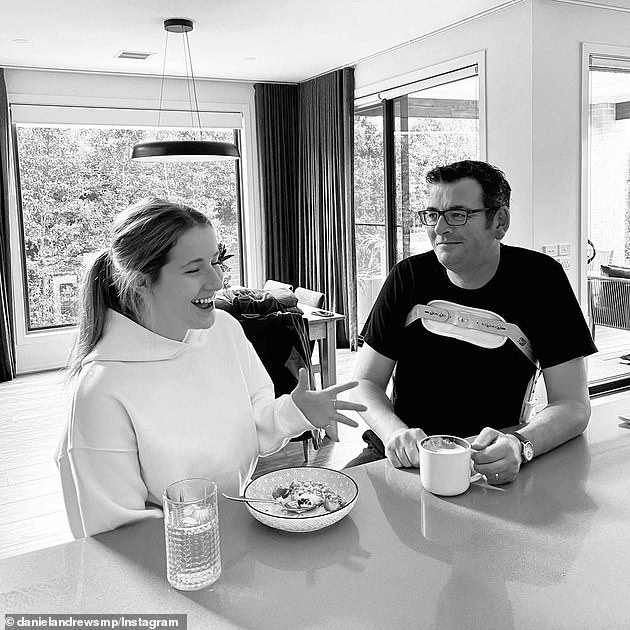 Dan Andrews (pictured with daughter Grace, 18) in April as he recovered from his back injury

‘Our concern at the moment is there may well be more out there,’ he told reporters.

He encouraged Victorians to call each other out about virus symptoms to boost testing numbers.

There were a little over 15,000 tests in the past 24 hours in Victoria, with similar figures in recent days.

Heavy rainfall and widespread flooding has been a likely deterrent for many, with some areas without telecommunications or power.

The single new infection added on Saturday is a ‘mystery case’, Mr Weimar said, although he believes investigators will find a link to the main Kappa strain outbreak.

There are now 74 active cases in Victoria, including returned travellers in hotel quarantine.

Melburnians have grown wearily used to lockdown, having emerged from a fourth on Friday.

Restrictions have been eased allowing residents to move around within 25km of their homes and to have outdoor gatherings up to 10 people, with mask wearing indoors and outdoors.

Students have returned to schools, retail is open and hospitality venues have resumed seated service.

The repeated economic stress on Victorians was front of Treasurer Josh Frydenberg’s mind this week when he said the lockdown ‘dents confidence’, ‘hits investment’ and ‘costs jobs’.

The Melbourne MP met with state and territory counterparts on Friday where it was agreed that Victoria and NSW would draft a new model for household support to be funded by the Commonwealth in any future lockdown.

Nationally consistent payments for Australian businesses are to be put before next month’s national cabinet meeting to be chaired by Prime Minister Scott Morrison.

Under the arrangement, the federal government will offer payments of up to $500 for workers who lose income when a hotspot-designated area is locked down for more than a week.

Prince Charles urges G7 action on climate change: 'Do it for planet as well as pandemic'