Having grown up as a young boy in the Czech Republic dreaming about playing the Premier League, Tomas Soucek knows plenty about English football.

Right down to the grassroots it transpires. When lockdown begun in March just four games into his West Ham career, late January arrival Soucek needed somewhere to train to stay in shape ahead of the season’s resumption.

‘We went to Hackney Marshes, where there is 50 pitches in one place,’ he smiled. ‘It was incredible for me. 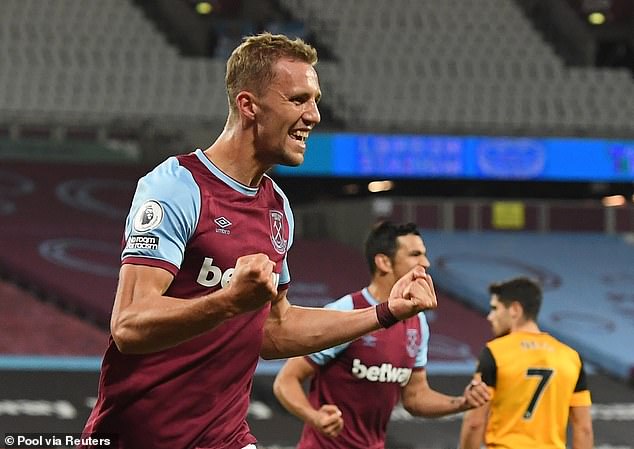 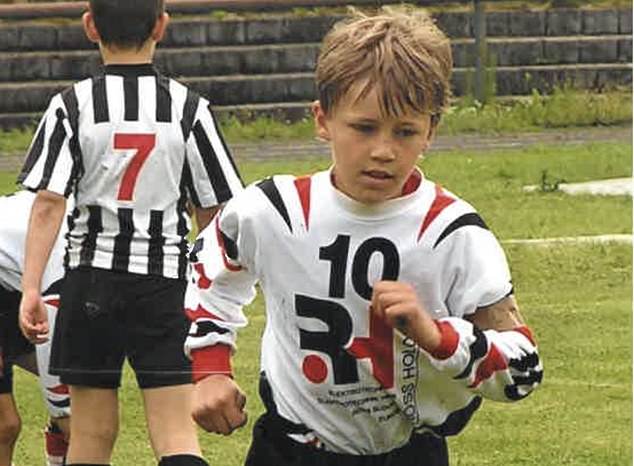 ‘I heard all about the tradition for playing Sunday league football there, though there was nothing like that during these times. I took a ball and some cones and I did normal training but individually.

‘My wife was sometimes giving me the ball and helped me enjoy it and sometimes I enjoyed it with my daughter and her. After maybe two or three minutes I would go for a run. I was going there regularly for one or two months so it was not too much.

‘Sometimes people would wave to me and others would cross their arms in front of their chest. We had to keep 2m distance, so they did not come up to me but it was very friendly and there were other people training on the field. It was a very enjoyable experience.’ 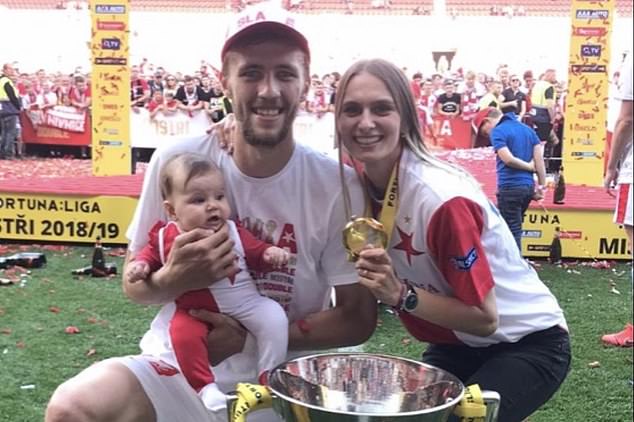 Newly-arrived in London from Prague, lockdown and being away from family in particular was hard for the Soucek’s – Tomas, wife Natalie and 20-month old daughter Tereza.

But the midfielder, 25, is quick to acknowledge that period was difficult for everybody. Soucek’s sense of perspective is clear.

It is no doubt helped by memories of the sacrifices his mum Iva, an accountant, dad Frantisek, a bathroom company manager, and grandfather, also Frantisek and a former bus driver, made in juggling their workloads to keep his dream of being a footballer alive.

For five years, after leaving his hometown team FC Havlickuv Brod aged 10 to join Czech giants Slavia Prague 120km away from where he lived, Soucek needed ferrying up to five times a week for training before he eventually joined the latter full-time aged 15.

The family trio shared the considerable amount of driving between them, needing to plead with their respective bosses to be flexible so they could be available when it was their turn for a long stint behind the wheel. 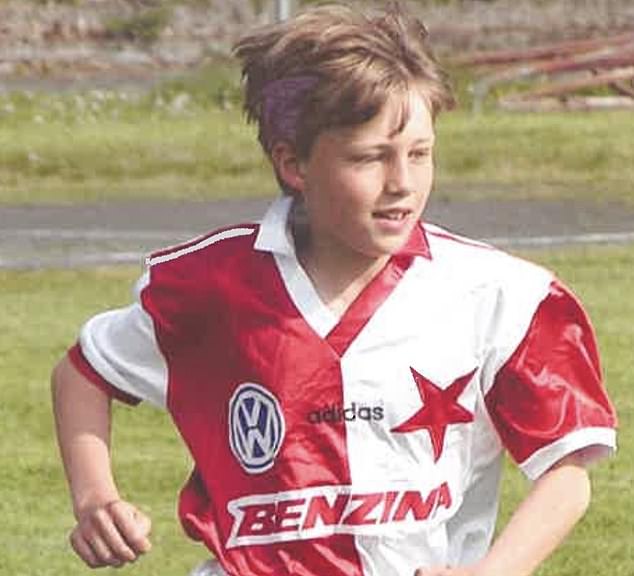 ‘It was really hard for them and when I am here, start to play for our Czech first league I wanted to show that I am very happy with what they were doing for me,’ said Soucek, who initially joined West Ham on loan before his move from Slavia Prague was made permanent for £19m in July.

Soucek hails from a sporting family – ‘my big inspiration,’ he calls them. His dad was a former goalkeeper and took Soucek to his first training session as he coached the team.

His mum initially played handball and aunt played football too. In the last 15 years his mum has taken up long distance running and has completed a number of half and full marathons. 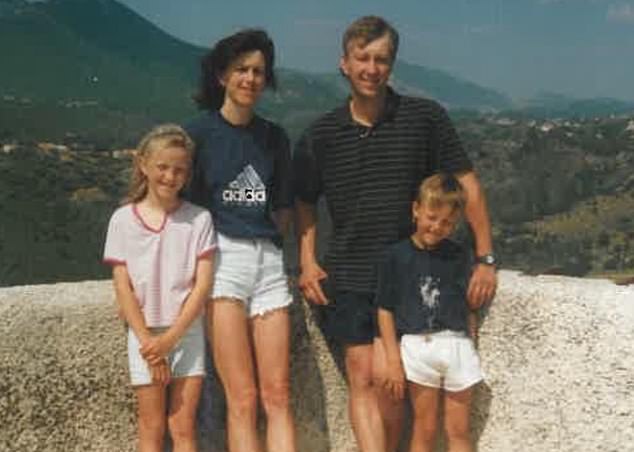 Soucek (far-right) on holiday as a young boy with his mother Iva (left), father Frantisek (right) and sister Michaela (far-left)

Soucek used to join her on forest runs as a youngster and, occasionally, still does in pre-season to build up his fitness and credits his stamina to his mum.

He said: ‘No, no! I’ve never done it [a marathon]. But maybe. I spoke with my wife about doing one marathon for fun after my career. But I don’t like too much kilometers in a row in the same intensity.

‘The first option when I was born was for me to play football and I played football from my very early childhood.

‘When I could go outside, or at lunch or at dinner with my dinner and everywhere I went I would ask my family if I could take the ball with me.’ 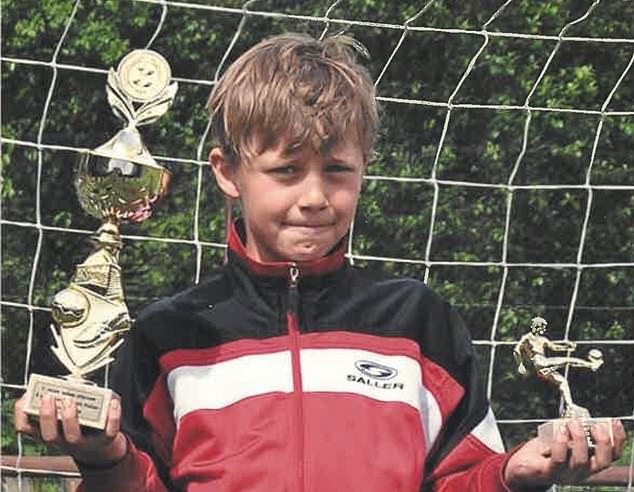 Back in those days, Soucek’s bedroom was plastered with posters of his heroes including some of the Czech Republic’s biggest names such as Vladimir Smicer and Tomas Rosicky.

Rosicky inspired him to support Arsenal and having watched both the Premier League and Champions League on TV with his father he remembers telling him it was his aim to play in England’s top flight.

So much so in fact, that when opportunities to leave Slavia Prague for Italy, Russia or Germany have cropped up in the last couple of years, he reminded his agent that the Premier League was his dream destination.

Soucek was so determined to be ready if the chance arose that he began learning English six months before he arrived. 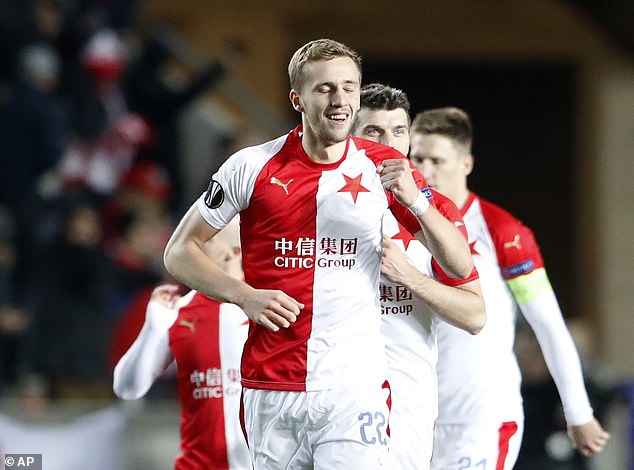 The lessons with his Derby-supporting teacher have paid off with Soucek speaking English impressively, and far better than he thought himself, given he has only been in the country since for around nine months.

Being in the Premier League has also allowed him to continue his endearing hobby of collecting shirts of the players he watched growing up.

‘When I played Champions League I met many players who they were on my wall! So I like to change shirts with them and I want in time to have a small museum in my house of my parents,’ he said.

‘Olivier Giroud is one. I played against him at Chelsea and I scored against them. I met him in the doping test after the game. 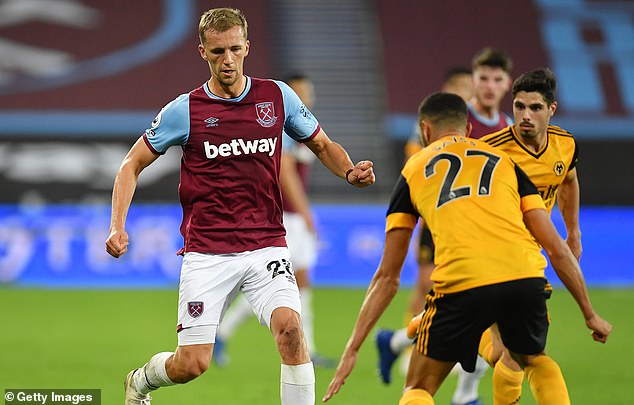 ‘No, no I didn’t tell them I have their pictures on my wall. But I want to keep their shirt and I want to give my shirt next to the pictures of them on the wall.’

Having previously got his hands on a Harry Kane shirt after an England game, Soucek has added Heung-Min Son’s shirt to his collection after West Ham’s stunning comeback at Tottenham last week, after which Jose Mourinho labelled the Czech star David Moyes’s new Marouane Fellaini for his aerial prowess. 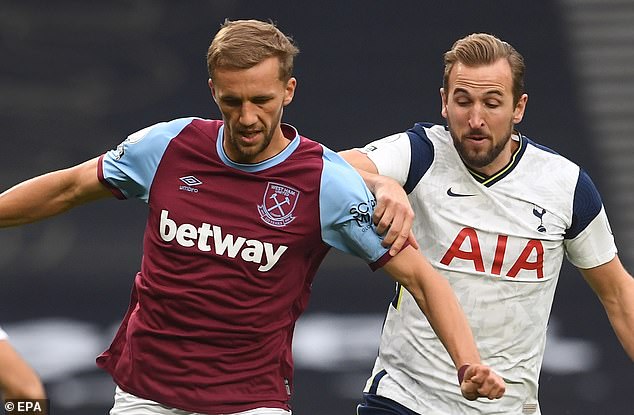 Soucek, up against Harry Kane last week, previously got the striker’s shirt on international duty

Star studded Manchester City’s visit to the London Stadium provides another chance for Soucek to grab some more memorabilia.

But he said: ‘I don’t plan for which one I might get. I do it on how I feel after the game, how I feel and what guy I meet. It is all done after the game – I don’t go into games like a tourist, just looking to get somebody’s shirt. It all depends on how the match goes.

‘Sometimes I don’t swap shirts at all. It all depends on the game, the guy and how I feel.’