All Australians are expected to be vaccinated against COVID-19 in the space of just eight months.

Health Minister Greg Hunt said the vaccine rollout is expected to begin in March and be finished by October next year on Thursday.

‘It will work down through the age groups starting in March and working through to an expected completion by October,’ Mr Hunt told Chris Smith on 2GB.

‘The way it’s likely to work is working down the age groups, which is what’s happening around the world, and that simply follows the risk of impact from coronavirus.

‘But also for those workers that might be of risk of transmitting such as the frontline quarantine workers, who will also be in that first round.

‘It will be free, universally available but voluntary.’ 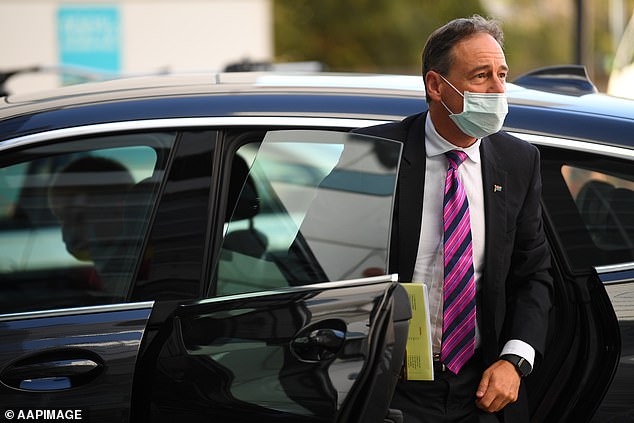 Health Minister Greg Hunt (pictured) said the vaccine rollout is expected to be completed by October, 2021 on Thursday

Mr Hunt explained the vaccine will roll out monthly for descending age groups.

‘We’ll be rolling out monthly, so the first month we’re focused on the health workers, medical workers and aged care residents,’ he said.

This means the second round will come in April, the third in May, the fourth in June, the fifth in July, the sixth in August, the seventh in September and the eighth in October.

The Health Minister said the vaccine is a ‘two-dose jab’ consisting of a first shot and a booster taken a month later, meaning people will have to make two trips to be vaccinated.

He said it will available at general practices, hospital, state and commonwealth respiratory clinics and Indigenous community health centres.

Mr Hunt said he would like the vaccine to be available in pharmacies from the second round when they have ‘established a very clear process’.

Trump threatens Iran after the bombing of the US embassy in Baghdad: If he kills an American, I will hold them responsible

The Courage to Be Disliked: The Japanese Phenomenon That Shows You How to Change Your Life and Achieve Real Happiness

The Courage to Be Disliked: The Japanese Phenomenon That Shows You How to Change Your Life and Achieve Real Happiness